The Witcher 3 is huge, so here's our guide and walkthroughs to help you tackle one of the greatest RPGs of all times.

Fans will be pleased to hear that The Witcher 3 will be available on the Nintendo Switch from October 15, giving you a perfectly reasonable excuse to jump back in and replay one of the best games ever made.

On our adventures, we'll take in the sights of Velen, Novigrad and Skellige before we even make it out of the first act. It's a lot to take in all at once, but don't worry - our guide is here to show you what you need to do and when the best time to do it is.

Below you'll find a couple of general guides you may want to glance at early in the game. Beyond that, we move into questlines divided by story act and region. As well as the lists here, you can click through to walkthrough pages with key details for individual quests.

The DLC packs, Hearts of Stone and Blood and Wine, are listed after the vanilla content; although you can do them at any time, they are standalone modules and do not interact with the critical path and associated side quests in meaningful ways, so it's safe to leave them for after the main game, as the level of their content expects.

Good luck on the Path, Witcher.

Just a few handy guides on a range of Witcher 3 topics, to help you get started, get finished or get out of the hole you dug for yourself. 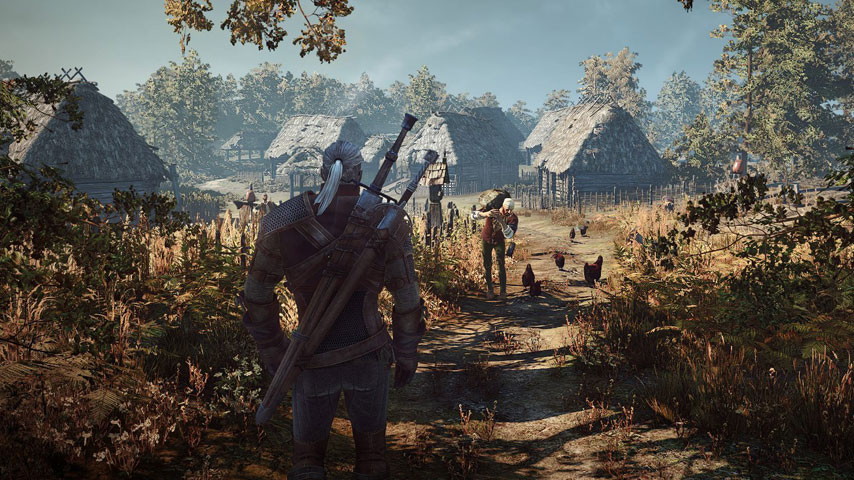 The Witcher 3 starts with a modestly-sized map. Feel free to run through the story as quickly as you like if you don't have any problems with difficulty, but pause before the very end of The Beast of White Orchard to do any secondary quests you want to complete, as you'll then be automatically transported to the next area, failing some unfinished quests.

Follow Geralt's quest to track down the sorceress Yennefer, ridding White Orchard of a troublesome monster along the way.

There's only one Witcher Contract to be had in White Orchard, but it's a great introduction to these challenging but ultimately super rewarding secondary quests.

Complete every secondary mission before leaving White Orchard for loads of treasure and XP - plus a lot of fun.

Destroy every monster nest, find every guarded treasure and raid every smuggler's stash, and you'll be well-prepared to tackle the next section of the game. Act One of The Witcher 3 is called In Ciri's Footsteps and includes three main story threads, each of which is broken down further into multiple main quests. Each of these takes place in a particular location. The easiest one is spread across the wilds of Velen (No Man's Land), while the next most difficult takes place in and around the city of Novigrad, with the third and most difficult focused on the islands of Skellige. You must attack all three in order to complete the quest In Ciri's Footsteps and Act One.

After visiting Vizima, you'll be dumped down in The Witcher 3's huge open-world map; if you thought White Orchard was big, you're in for a shock. Don't freak out; you don't need to see and do everything hear just yet, as much of it is too hard for baby witchers on their first visit to this sprawling landscape. We suggest sticking to Velen quests before heading up to Novigrad or across the sea to Skellige.

The Witcher 3: Act One - Velen (No Man's Land) Critical path

On the hunt for Ciri, Geralt seeks information from a Nilfgaardian agent in Velen, which leads him to two possible sources of information on his protege's whereabouts.

Witcher Contracts pay well and hand out lots of EXP but they do require your best skills. Never attempt them unprepared.

Complete every secondary mission in Velen for lots of extra treasure and XP. The Novigrad questline of Act One takes place in a much more contained map than the Velen quests and offers increased XP rewards despite fewer battles with monstrous foes. Explore the twisting streets to discover well-equipped merchants, reunite with old friends, and untangle the mysteries of your bestie's disappearance.

Geralt hopes his ex-girlfriend Triss, a powerful sorceress, may have information on Ciri. Their awkward reunion is complicated by the religious fervour gripping the city, and the notable absence of the minstrel Dandelion. Skellige is a difficult place to explore cross country thanks to an enthusiastically vertical attitude in the local landscape. Skirting the coastline in a boat is much more satisfactory (although you need to beware of storms, monsters and pirates) and merchants will sell you guidebooks to unlock new fast travel points. Investigate local leads with your former lover as you put together the final pieces of the puzzle of Ciri's disappearance.

Geralt's former lover Yennefer heads to Skellige, where a strange magical occurrence may be linked to our much-sought child of the elder blood. The white-haired Witcher follows, becoming embroiled in local politics and fending off threats from shapeshifters. Having exhausted all possible leads in Velen, Novigrad and Skellige, Geralt and Yennefer have just one more clue to the whereabouts of Ciri - a cursed individual known as Uma. Updating Emhyr on their progress - or rather, lack of it - the pair retire to the witcher stronghold at Kaer Morhen to attempt to break the curse.

Learn more about the witchers of the Wolf school as you make preparations to free Uma from a powerful curse - and to battle the Wild Hunt. Gather your allies from Velen, Novigrad and Skellige to face the mightiest foe Geralt has ever tackled. Having faced down the Wild Hunt at Kaer Morhen, but not come through unscathed, Geralt and Ciri are at a loss: they can't keep running and hiding forever, but they obviously cannot hope to destroy the Wild Hunt through conventional means. Yennefer and Triss opt to gather allies in Novigrad, while Avallac'h believes the answer lies with his people. Meanwhile, Ciri has grave doubts about her future.

Act Three kicks off directly after Blood on the Battlefield, with Ciri and Geralt making for the Sabbath at Bald Mountain. Their actions there give them some confidence for the future and nurse their wounded hearts, but also inspires them to tie up loose ends and prepare to meet their destiny. The first major expansion for The Witcher 3: Wild Hunt, Hearts of Stone is a terrific romp with a compelling antagonist, some playful adventures and a few wicked fights. Wild Hunt's second and final expansion, Blood and Wine introduces a whole new landmass, a fresh-faced cast, and a deadly beast. Bring joy to Toussaint - or leave chaos in your wake.

Are we missing something? Let us know in the comments and we'll do our best to tackle it - not that we need much excuse to dive back in to spend some more time with Geralt.