The Witcher 3: Wild Hunt gives players the choice of either going in with a clean slate or answering a few questions about the part they played in the events of the previous game. The choices yield different results, but it's not clear which is which from the outset.

The Witcher 3: Wild Hunt is the first game in the series to come to a PlayStation and Nintendo platform. It's also the series' first new-gen instalment, which means importing saves from The Witcher 2 is impossible. The PC version has a save import function, so it's not an issue there.

To get around that on consoles, developer CD Projekt devised a scene in which a character asks Geralt a few questions about his choices in the previous game's various plot points. Your choices matter, as they alter the world state and other small storylines in the game.

There's just one small problem: when you're given the choice after starting a new game, the description doesn't make it clear which of them shows you this scene and which doesn't.

To make it even more confusion, the scene in question doesn't actually play until a good few hours into the game, so there's no way to know if you made the choice you wanted. As part of our full The Witcher 3: Wild Hunt guide and walkthrough, we're here to help.

Here's what you need to decide: 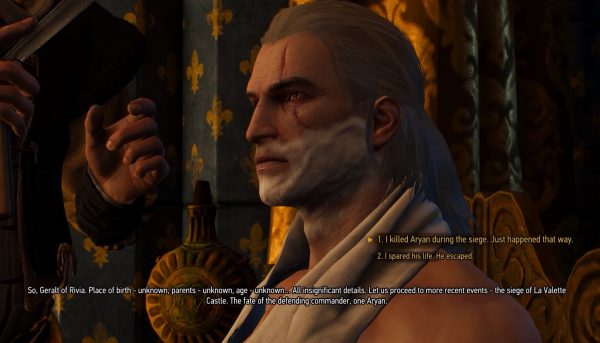 Simulating a Witcher 2 save

There are various choices presented to you if you choose to simulate a save. These are:

Each of these choices will influence who shows up in the game and certain quests. Sadly, we've yet to find Iorveth in The Witcher 3, bur Roche does appear if you side with him.