For the rest of the week, you can get 20 per cent off a range of top console bundles at AO on eBay, including this Xbox One X deal.

All you have to do is use the voucher code 'PURE20' at the checkout and you'll get this Xbox One X 1TB with Forza Horizon, Forza 7 and Apex Legends Founders Pack for £295.20. That's a massive saving of almost £75 on the usual price.

Both racers are considered as some of the best available on the console, while the Apex Legends Founders Pack is a great way to get you started in Respawn's battle royale. The bonus skins it grants you are all fine if you like a bit of customisation, though having 2000 Apex Coins off the bat is handy for purchasing additional characters. 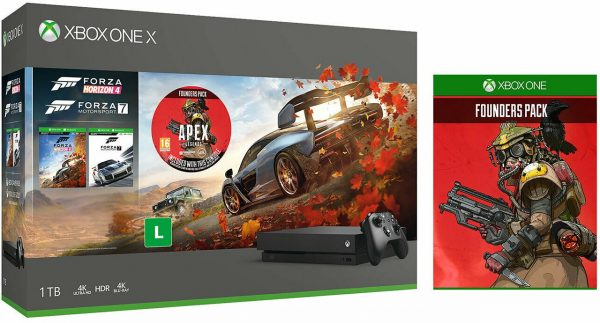 That's not all you can find for cheap at the minute, as the 20 per cent off code work across anything in the AO store that's over £25. For starters, you could look at some other console bundles while they're reduced.

There's a Nintendo Switch Neon with Mario Kart 8 Deluxe and The Legend Of Zelda: Breath of the Wild for £295.20. That's an excellent pair of games to get you started. Elsewhere, you can get a 500GB PS4 with Red Red Redemption 2 for £199.20, which is another terrific bargain.

If you have the time, it's absolutely worth going through the AO store page to get a closer look at everything that's included in the 20 per cent off code. Just to pick out a few things aside from the console bundles, you can find some good keyboard bargains such as this Logitech G810 Orion for £100.80. Of course, you can find a whole load of TVs, laptops and home cinema systems there as well.

The 'PURE20' voucher code will be live until this Sunday and it can also be used in many other stores including Ebuyer and Hughes Direct.

Be sure to keep an eye on Jelly Deals where we'll be bringing you all the latest deals from across the web!