Walmart is making a very early start on its Xbox One Black Friday deals with this fully-loaded Xbox One S bundle for $300.

After leading the way last week with a terrific Nintendo Switch bundle, the retailer has now given its attention to Microsoft’s console. A total of four different Xbox One S bundles are available at $299 and it’s another build-you-own-bundle situation. You have a choice between Gears 5, Battlefield 5, NBA 2K20 and Forza Horizon 4 and the lead games. 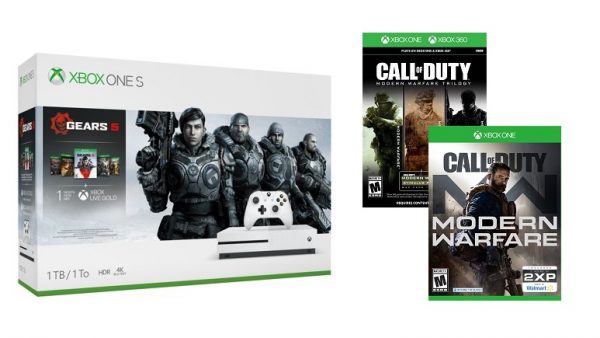 That brings it up to a total of fives games included, which undoubtedly makes it an excellent value for money Xbox One S bundle – even if three of the games are last gen. Two of them are easily up there with the best in the Call of Duty series, though, so there are no complaints here.

We’re definitely starting to see many retailers ramp up their Xbox One Black Friday deals now we’ve entered November. Yep, hold on tight, Black Friday is coming. Microsoft themselves have even hinted about the Xbox Black Friday offers they’ll be running this year. Meanwhile, we’ve already got pages dedicated to any early PS4 Black Friday and Nintendo Switch Black Friday discounts we see.

There are even more savings to be found over at Jelly Deals, too. We’ve got the best Xbox Game Pass Ultimate deal and our picks for the best Xbox One external hard drives!