A Square Enix sale has just got underway on Xbox, with up to 80% off a range of games including Kingdom Hearts 3, Shadow of the Tomb Raider, Just Cause 4 and Final Fantasy 15.

All offers are live from now until 23rd September and there are definitely a couple that could tempt you if you’ve been holding off on a purchase until now. 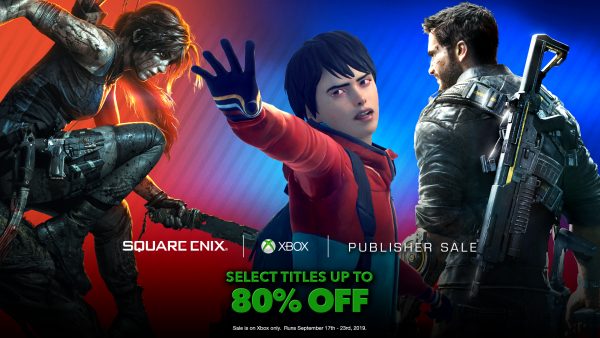 For example, there’s Life is Strange 2 for £21.96. That’ll get you the entire second season of Dontnod’s supernatural yet well-grounded drama. Four episodes are already available, with the fifth scheduled for release on 3rd December.

Elsewhere, you can get the Final Fantasy 15 Royal Edition for £19.99. This version of the expansive road trip JRPG includes all of the game’s previously released DLC. That means you’ll not only get a whole bunch of cosmetic tat (woo costumes!), but also each individual character episode and the multiplayer Comrades expansion. Add to that all the updates Final Fantasy 15 has received over the years and there’s a very solid game here.

Other offers in the sale are a little less enticing, though, as always seems to happen with some digital sales. Offering up Kingdom Hearts 3 for £27.49 isn’t going to prove so popular when you can get it for £14.99 at Argos. Similarly, there’s Shadow of the Tomb Raider for £18.14. Or, just, snag yourself a copy for £15.85 at ShopTo. It’s also readily available for free to Game Pass subscribers.

Nevertheless, with multiple entries in the Deus Ex and Final Fantasy series also reduced you may find something else you’re after on the full Square Enix sale page.

To keep up to date with all the latest gaming offers, please do pop over to Jelly Deals where you can find the best Xbox One external hard drives, the best Xbox Game Pass Ultimate deal and where you can buy the Borderlands 3 Super Deluxe Edition for the best price.