We were excited about Cyberpunk 2077 before that, of course - I mean, this is a new game from the developers of The Witcher 3, one of the best RPGs ever made. The developer says it is bigger and more ambitious than even Geralt’s third adventure. It is going to be huge.

Rather than exploring a fantasy land from horseback, Cyberpunk 2077 has players driving and walking around a sci-fi city - a sprawling metropolis stuffed with people to talk to, missions to complete, and dirty secrets to uncover.

Not only that, it was revealed at E3 2019 that Keanu Reeves will be playing Johnny Silverhand, a tech-ghost who follows around your protagonist. He might be doing some vocal tracks for Cyberpunk 2077's soundtrack, so watch this space for updates.

There's not much of a wait left until Cyberpunk 2077 is let loose into the wild, so here's everything we know so far. 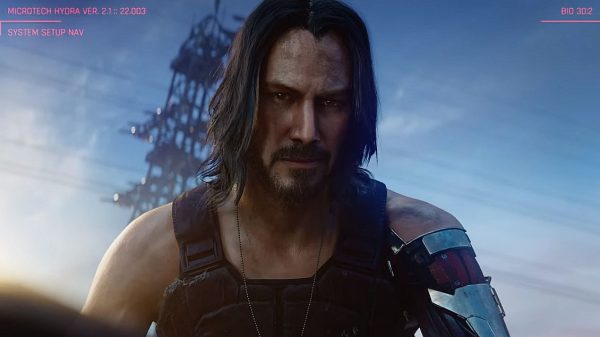 After waiting for what feels like an eternity, it was announced at E3 that Cyberpunk 2077 will release on April 16, 2020.

There are two editions of Cyberpunk 2077 available for pre-order - a Standard Edition and the Collector's Edition. Digital editions of the game will also come with the soundtrack, a digital artbook, a Cyberpunk Sourcebook and wallpapers for your desktop.

Last year, CD Projekt released the Gamescom and E3 demo of Cyberpunk 2077 for everyone to see. Have a watch of it, in full, above.

There will be a new gameplay demo shown at PAX West later in August this year.

In Cyberpunk 2077, you play as a mercenary called V. It’s up to you whether your V will identify as a man or a woman, and you can completely alter their appearance as you see fit.

It’s a lot like Mass Effect’s character creation system, in that you are also free to shape your character’s backstory and people in the world will react to this choice with different dialogue. The range of options shown in the E3 demo made it look like it will eclipse Mass Effect when it comes to cosmetic options, however. You can get a glimpse of it in the gameplay demo up there.

One of the backstory choices revolves around a group called the Nomads in the Badlands, who live in cars and roam the wastes, kind of like a hyper-futuristic Mad Max scenario. 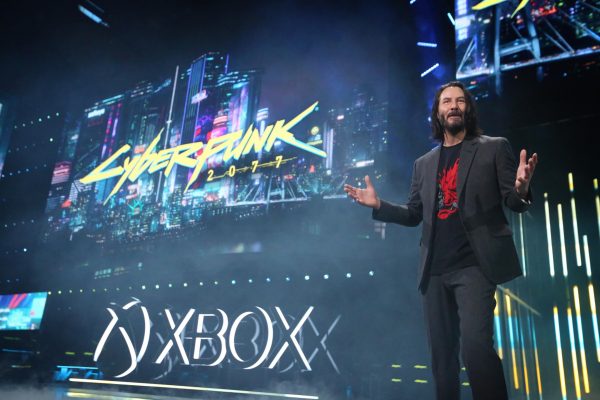 As we said earlier, Keanu Reeves will be playing Johnny Silverhand in Cyberpunk 2077. His character has almost as many lines as the protagonist, so expect him to feature heavily throughout.

Johnny Silverhand is a pretty badass character and one of the most famous artists in the Cyberpunk mythos, so there's a chance Keanu will be singing on some of the tracks for Cyberpunk 2077's soundtrack, as if having his face in the game wasn't exciting enough.

Somewhat controversially, Cyberpunk 2077 plays out from a first-person perspective. This more immersive viewpoint was chosen so people could feel the scale of the setting, Night City, and really get in amongst the grime and corruption. Additionally, it plays into the fact that you’re not playing as a pre-set character - you create your own avatar and you embody them completely.

First-person also helps CD Projekt Red deliver a brand new combat system based around guns, melee, and powers. Think of a more fast-paced take on Deus Ex, with optional stealth, deep conversation systems that you can interrupt by pulling out your gun, and more gore.

Cyberpunk 2077 is extremely violent. Every shot blows chunks off your enemies, you can use a katana to dismember people, and there’s even a weapon class that lets you shoot through cover, or even people.

Combat stims play a large role, too. You are equipped with an inhaler and you can huff it mid-battle to get a speed and sense advantage over your enemies. Combat and encounter designers have been hard at work creating believable, fluid sequences to suit each playstyle.

Interestingly, it was revealed at E3 that you'll be able to complete Cyberpunk 2077 without killing a single foe after some of the feedback suggested the previous demo was too violent.

As you would expect from a CD Projekt Red game, choice plays a large role in Cyberpunk 2077, too, and missions can play out a multitude of ways, affecting later missions and there will be several different endings to achieve.

You can navigate Night City on foot, in cars, on motorbikes, and even in flying vehicles, though these are automated and you can’t pilot them. You can switch to a third-person viewpoint in vehicles if you want to. All of this works seamlessly and without loading screens.

Much like The Witcher 3 and the way Geralt can whistle for Roach, there will be a calling system for your favourite vehicle. You'll be able to swim and drive cars and motorcycles, but planes and boats won't be operated by your character. 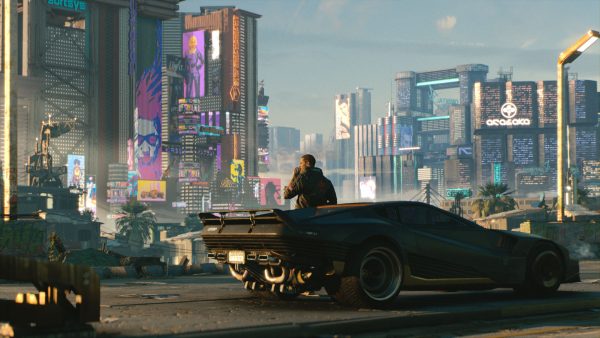 Cyberpunk 2077 takes place in Night City, a future metropolis stuffed with gigantic city blocks, winding highways, grimy back alleys, and neon lights. No amount of light can illuminate the dark underbelly of the city, however.

This is a transhuman society where almost everyone has embraced augmentations, melding man with machine to get increased physical attributes, boosted mental power, abilities, and cosmetic enhancements.

Ripper docs are surgical and mechanical experts who work from unlisted clinics, doing work on anyone who has the funds. These are the people you’ll visit if you want a new eyeball that can see through walls. This world is run by the corporations, and the divide between the rich and the poor is a chasm.

We got a Cyberpunk 2020 expert to write us a primer on the world if you want to really dig into the lore of the pen and paper RPG.

CD Projekt Red says Night City is the biggest world it has created. It’s a dense urban hub that you are free to explore, both inside buildings and out. Split into districts with their own distinct personalities, you need to be careful where you wander.

Your character can rent apartments across the city, working out of a skyrise home as your base of operations before taking the elevator down and exploring the city. If you want to know more about Cyberpunk 2077's AI, Night City, and the deserts and mountains beyond, have a read of our interview at that link.

Night City, a fictional amalgamation of New York, L.A., and Tokyo, is split into six districts:

There's also the Badlands, which is an area that was devastated after all the droughts and everything that happened in the 50 years leading up to 2077.

You’ll be able to explore the Badlands by car, on-foot and by motorcycle. It's also one of the settings you'll be able to choose as part of your genesis in character creation if you choose the Nomads. 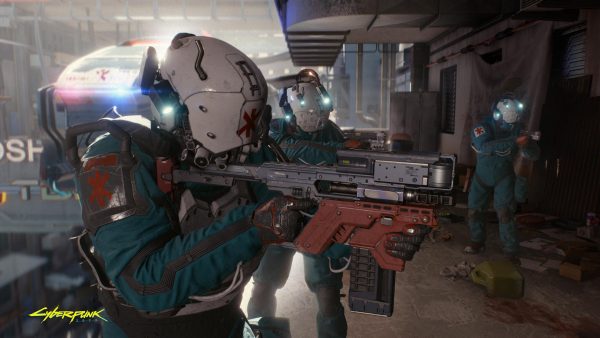 Cyberpunk 2077 has a fluid class system, much like Skyrim, allowing you to increase your potency in the areas you are using the most. In other words, you can make decisions but you are never locked into a single playstyle and you are free to experiment. The three class trees you can grow across are as follows:

Cyberpunk 2077 is a single-player game first and foremost. CD Projekt Red is partnering with Digital Scapes for Cyberpunk 2077’s multiplayer component, but it might not appear at launch - it will likely be released in an update after the game is out. Digital Scapes is the studio behind Dying Light's Be the Zombie mode. 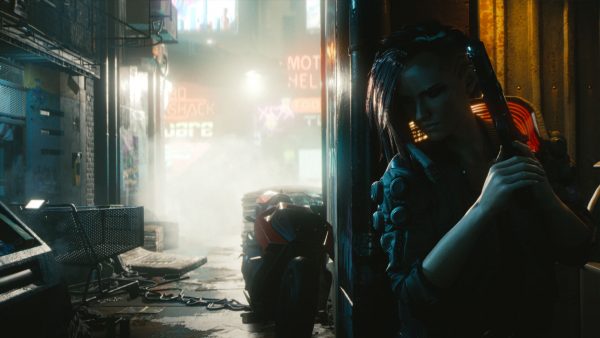 While we don’t have any concrete details yet on the specs your PC will need to run Cyberpunk 2077 well, we do know what PC CD Projekt Red used to demo the game at E3. Here’s what the developer was rocking:

Obviously, with the game being in pre-alpha, there’s a lot of optimisation work to be done yet, to make the game friendlier to lesser systems. Cyberpunk 2077 might look next gen, but CD Projekt Red says it is aiming to release on PC, PS4, and Xbox One.

Yes, you can bang people in Cyberpunk 2077. What did you expect from the people who made The Witcher 3, a game with loads of sex in it?

But where Geralt was a straight dude, Cyberpunk 2077 will let you have sex with whoever you want. Certain NPCs will be straight, some will be gay, and some will be bisexual. It’s up to you who you romp with, so long as they’re up for it.

Cyberpunk 2077 will feature full nudity, but relationships can grow to something more than casual sex.