After making the great decision of going down a secret staircase in a vampire’s bathtub, Resident Evil Village’s hero, Ethan Winters, is up to his waist in “wine”.

Following on from the ladder behind the Hall of Ablution, at the bottom there’s a Goat of Warding you can knife if you wish, but to continue with the story, drop into the liquid in front of you and wade through the cellar.

In the first room, there’s some scrap underneath the hanging bodies, but then go around to the left. 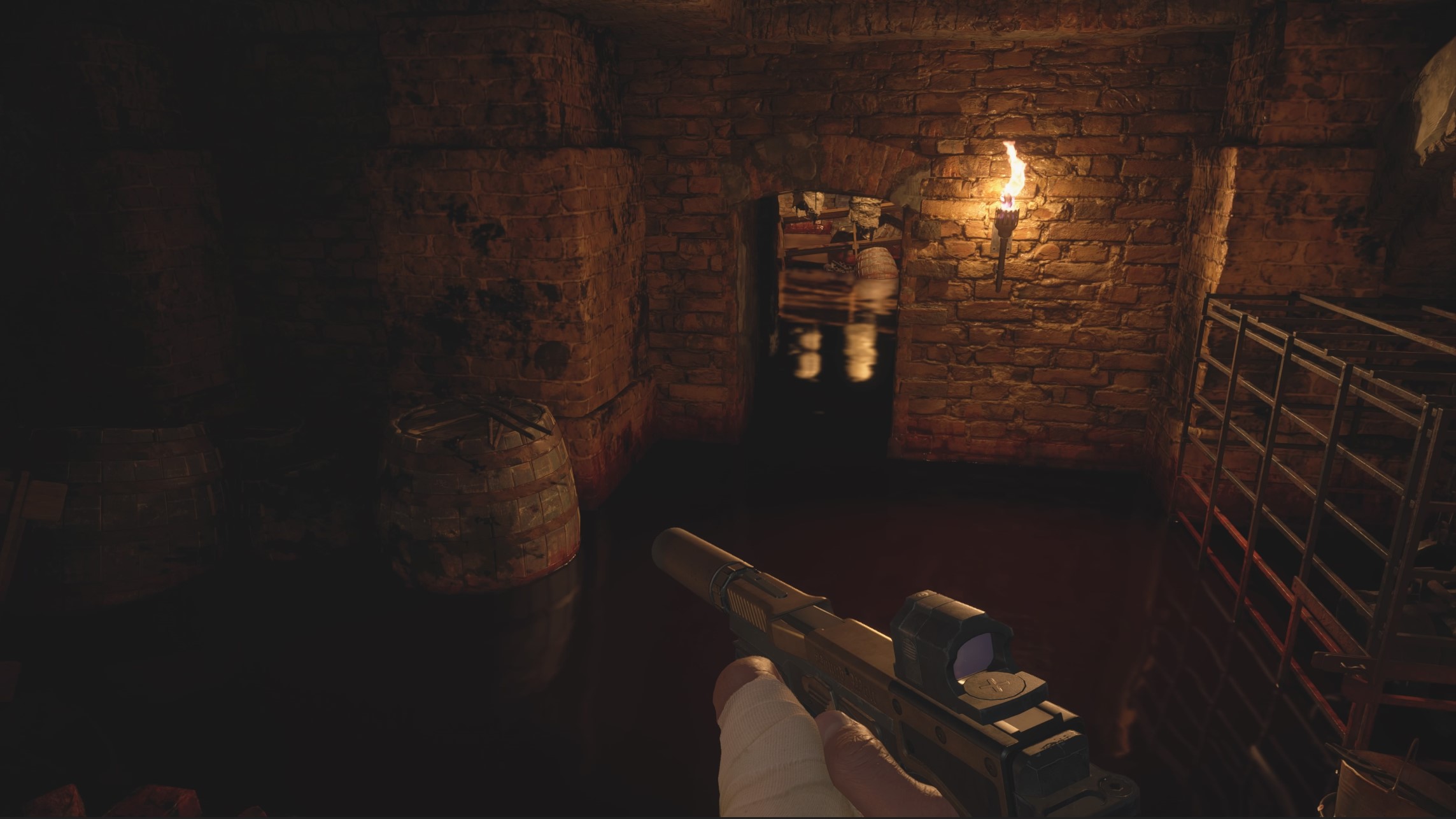 Carefully follow the path around, then smash the box in front of you for some ammo. 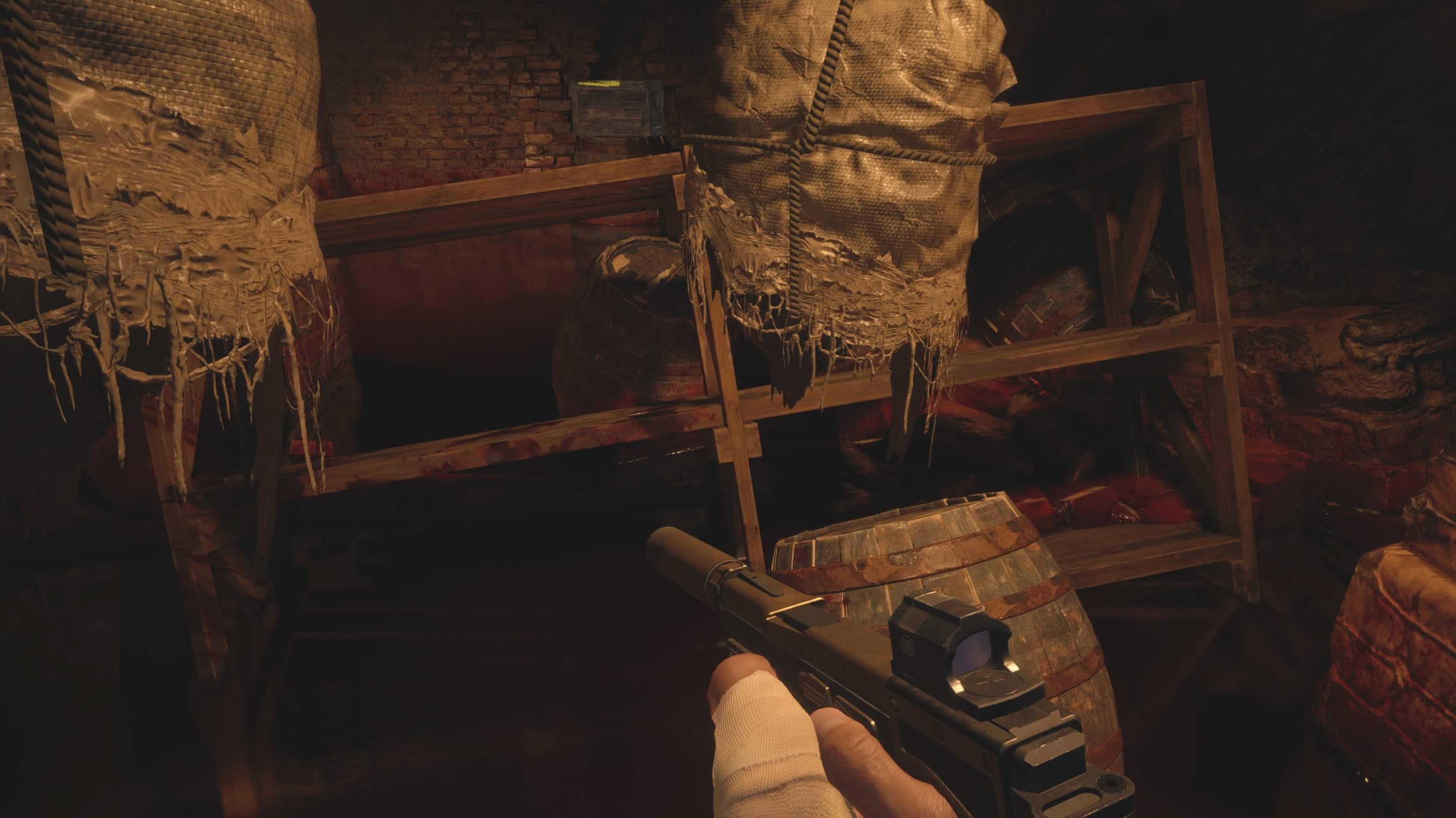 Change your underpants as you turn the second corner, then make sure you have enough ammo crafted to clear out the following room.

When that’s done, look for the brighter red light on the left, go towards it, beat up the next baddie, then grab the bullets from the table and move the bookcase across the door. 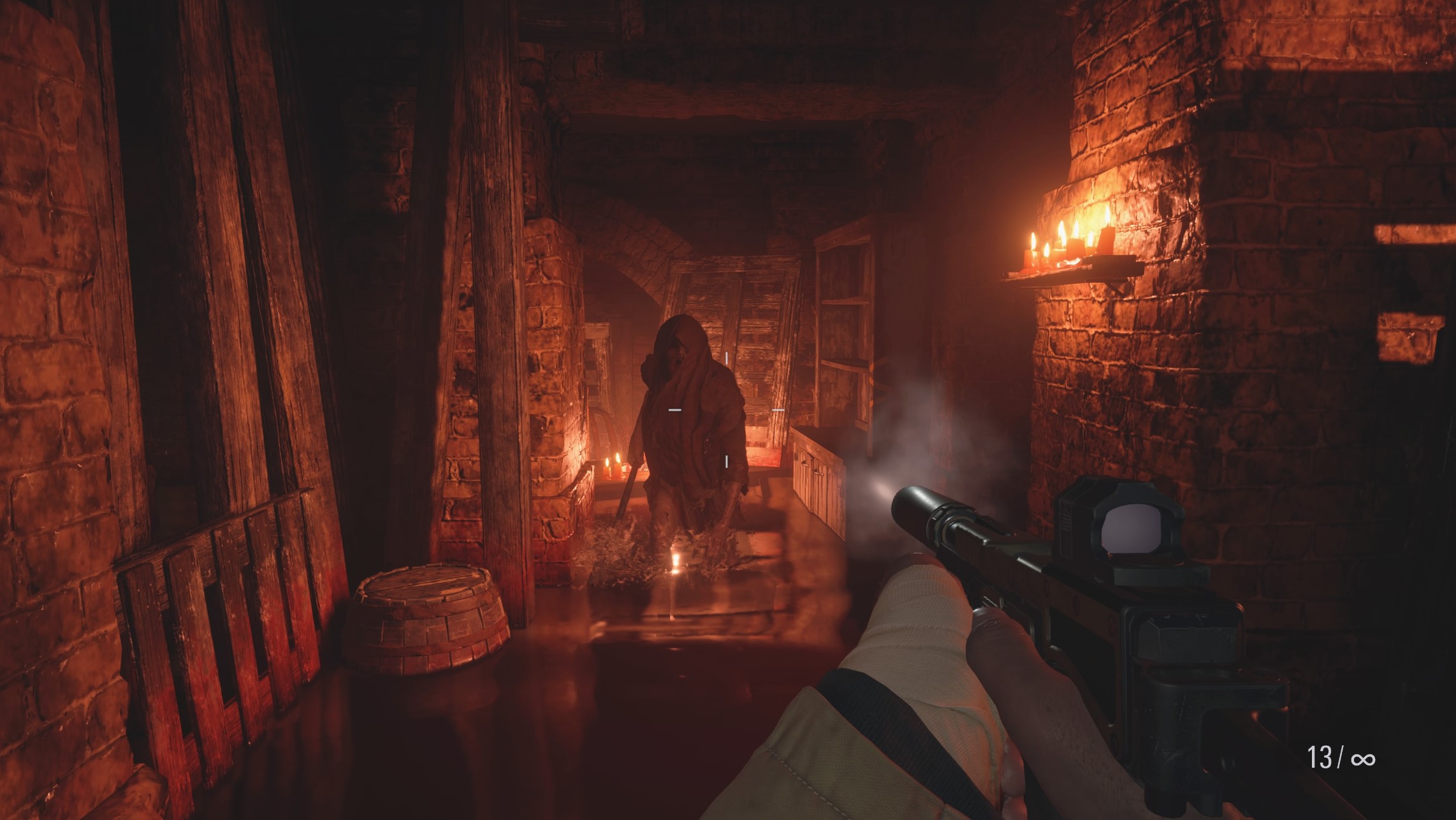 Doing so should trigger another ghoul, so shoot that next fella, then go into the hallway covered by the bookcase and smash the box. 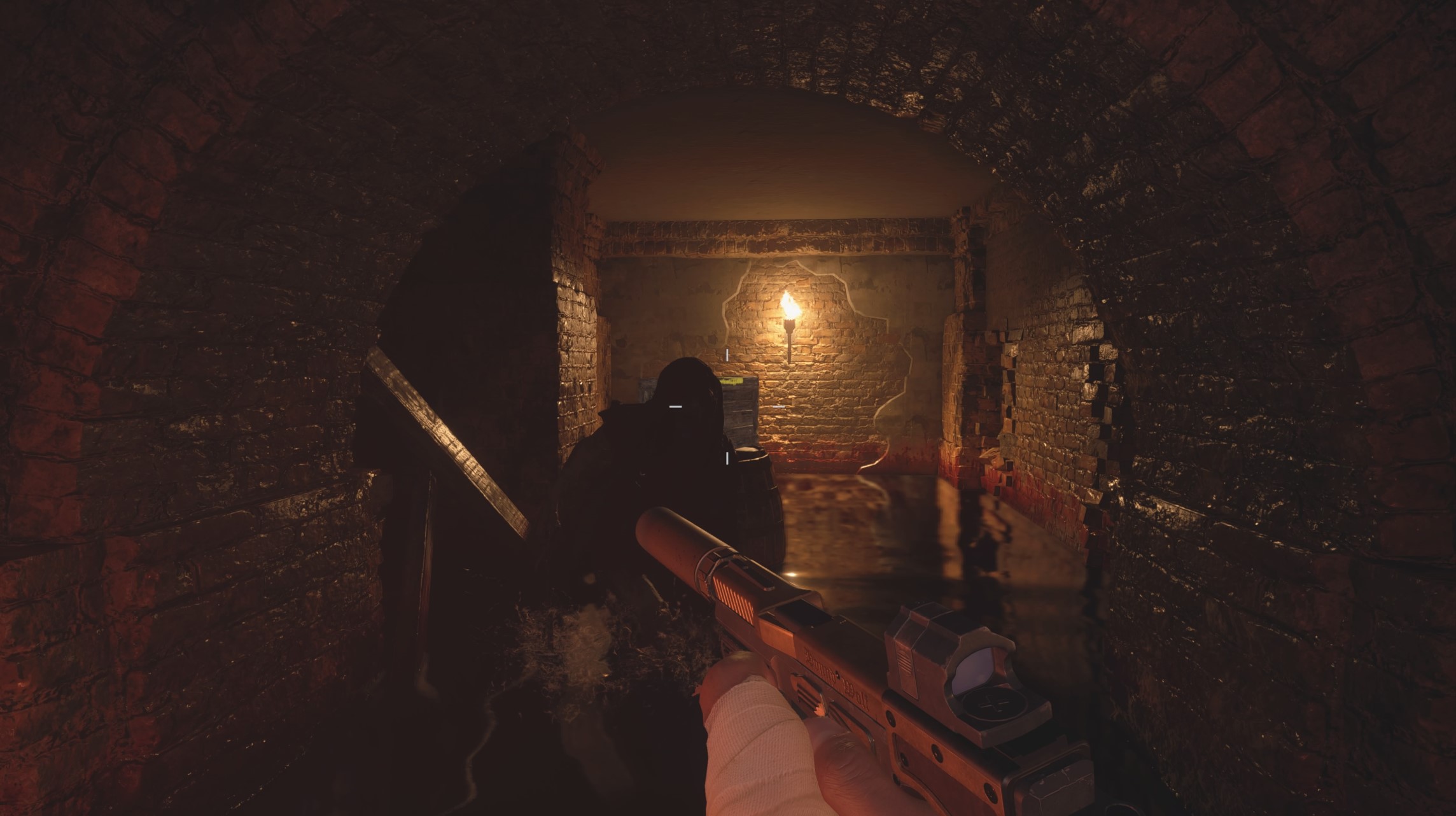 At the other end, there’s a left turn through a narrow hallway filled with hanging bodies; walk through it - picking the scrap up from your right - and you’re in the distillery. 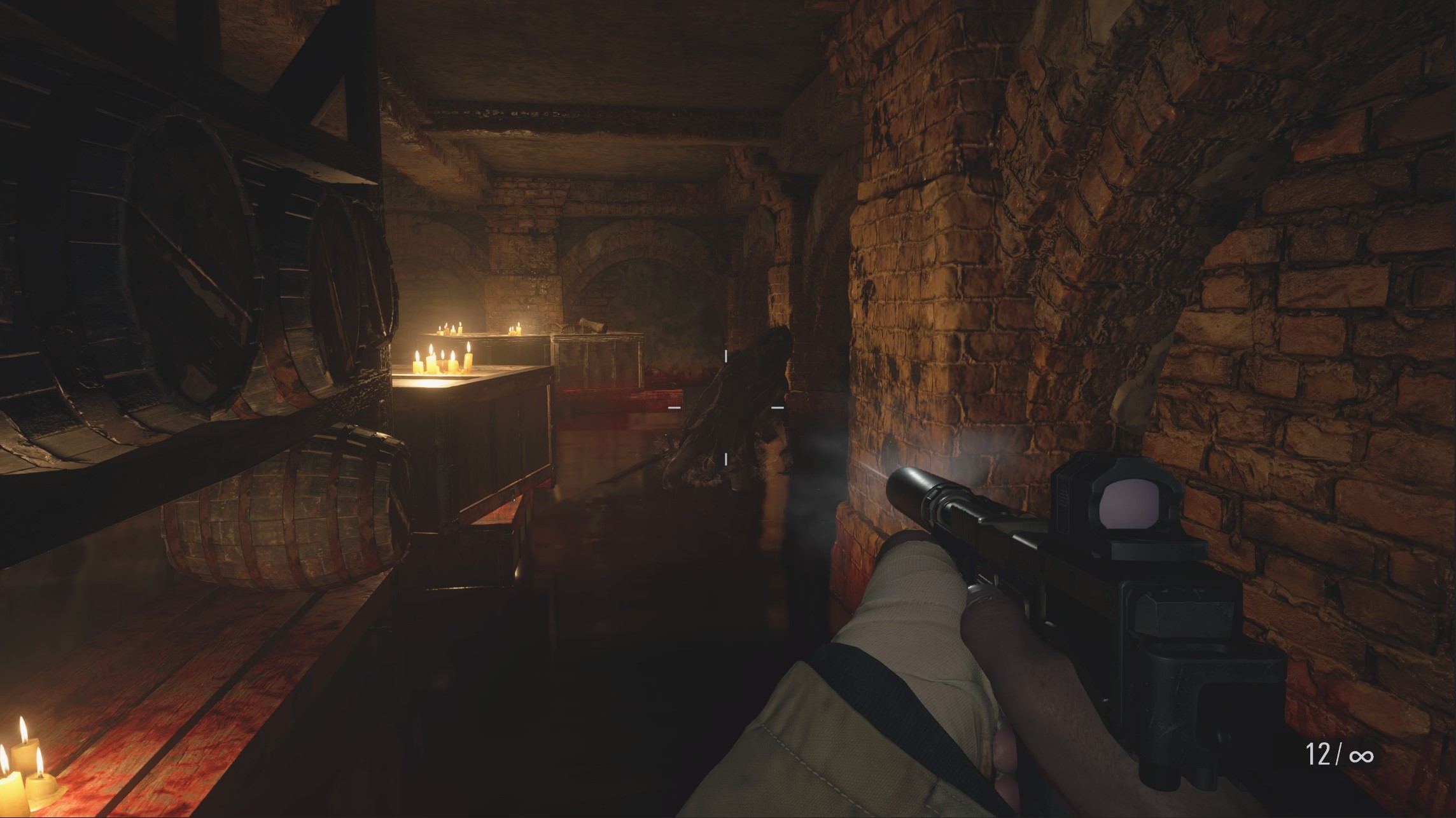 If you’re short on bullets, right now is a good time to craft some more, because you’re squaring off against no less than three more goons as you press on through this room.

On the far side of this room there’s some gunpowder behind the boxes, and some money inside the crate in the middle of the room.

When it’s safe to do so, go around the shelves and through the door at the top of the chamber.

There’s another bloke at the top of the stairs, and another crate to break - again full of cash. 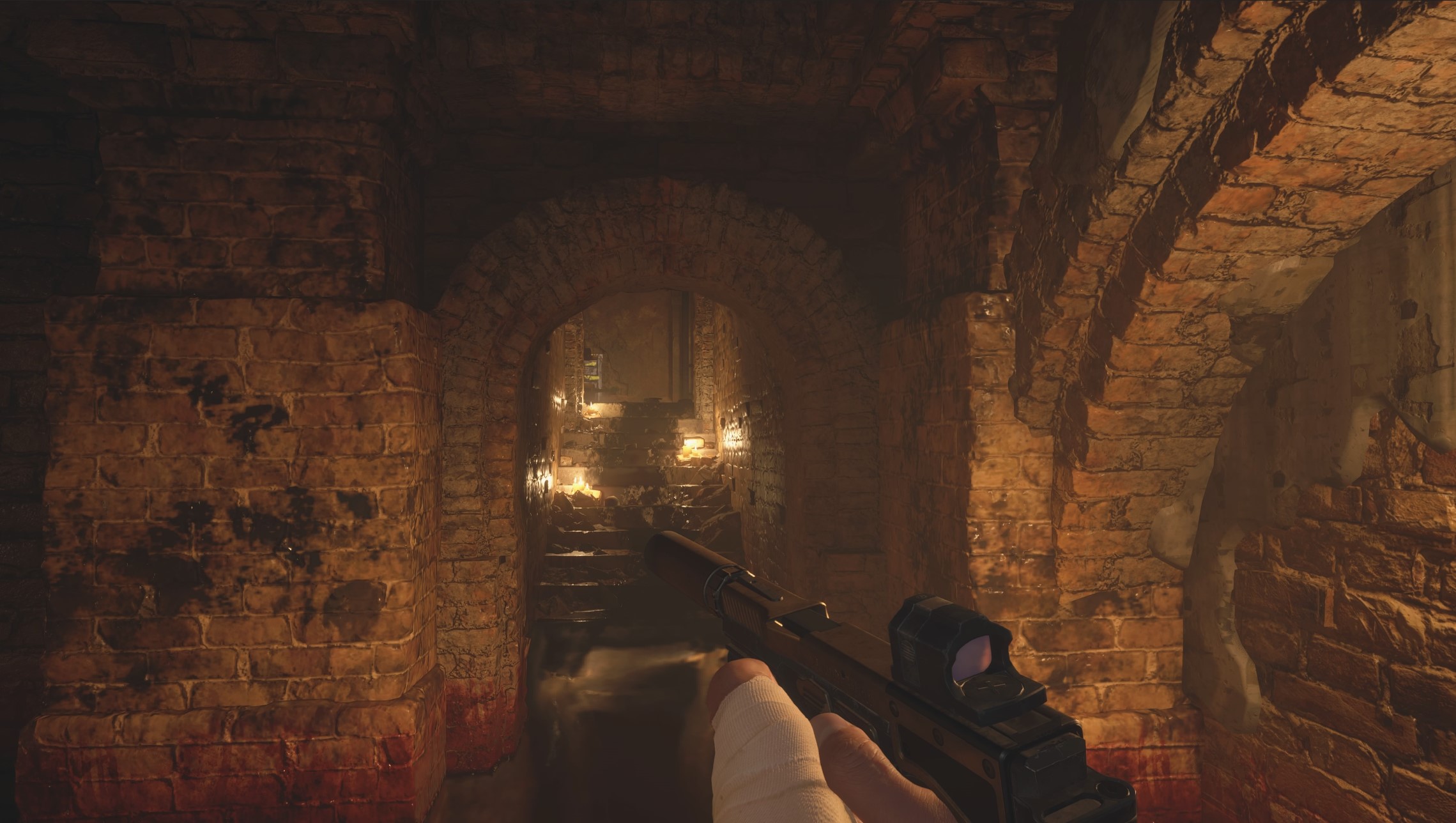 After you’ve stuffed that in your pockets, pull the drawcord on the right. 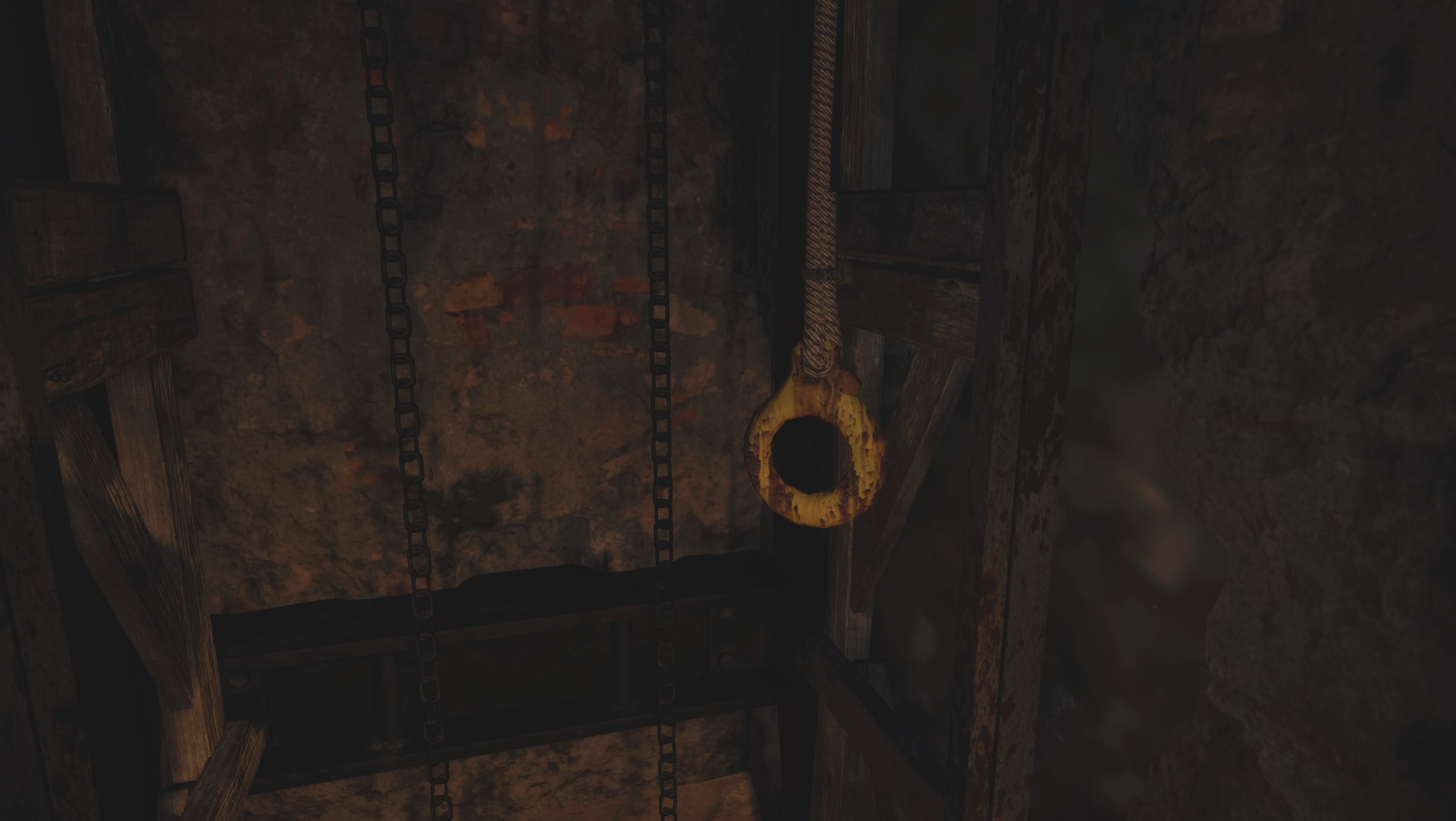 Now you’ll find yourself on Lady Dimitrescu’s terrace. Pick up the herb from behind you, then move forward along the balcony.

Around the corner, look to the left and head inside. Here you’ll find a bag of 1000 coins on the floor and a save point. 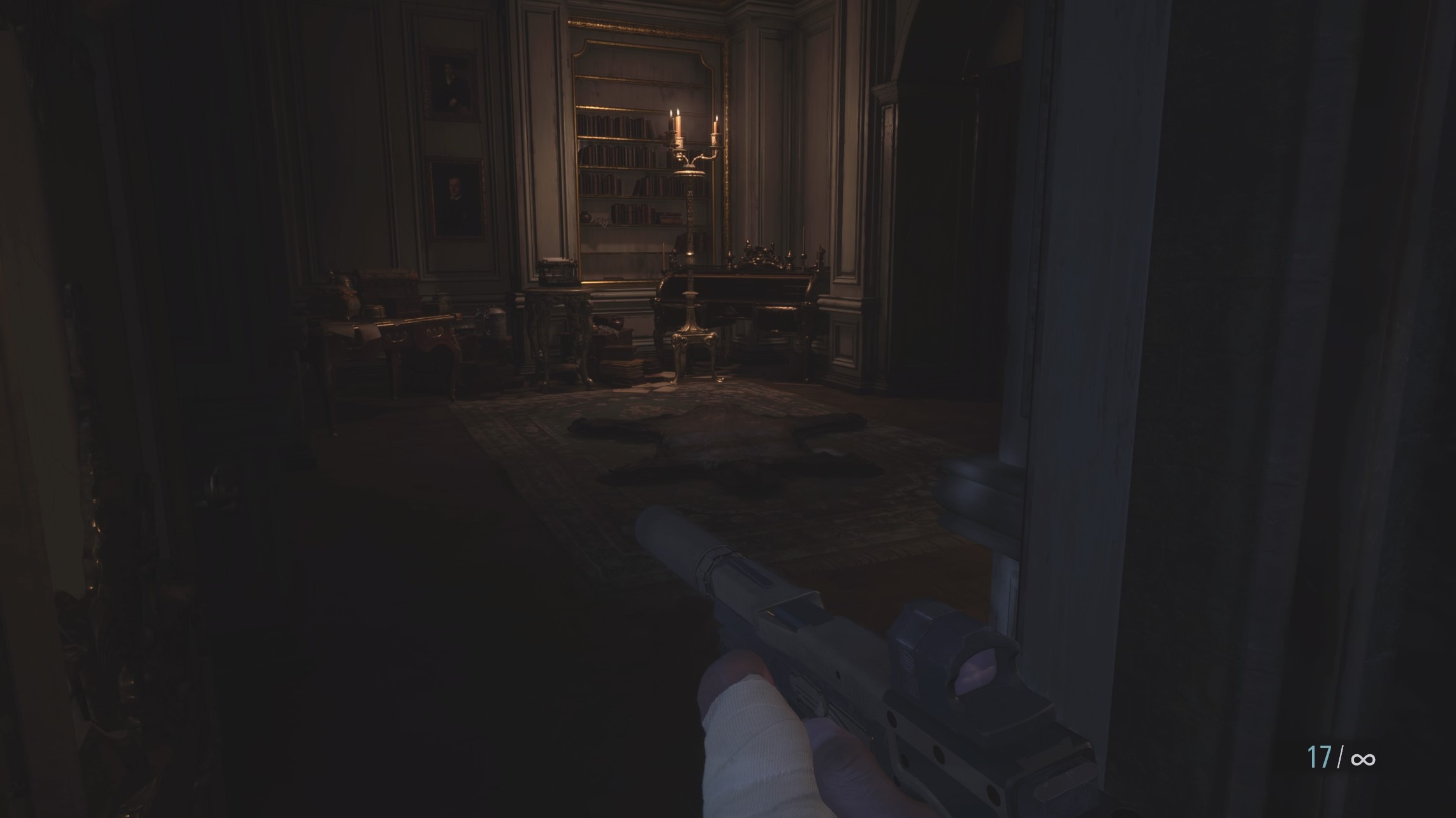 When you’re done here, go back onto the terrace and walk across the scaffolding. This leads to Dimitrescu’s chamber where you’ll see a scene from the trailers. 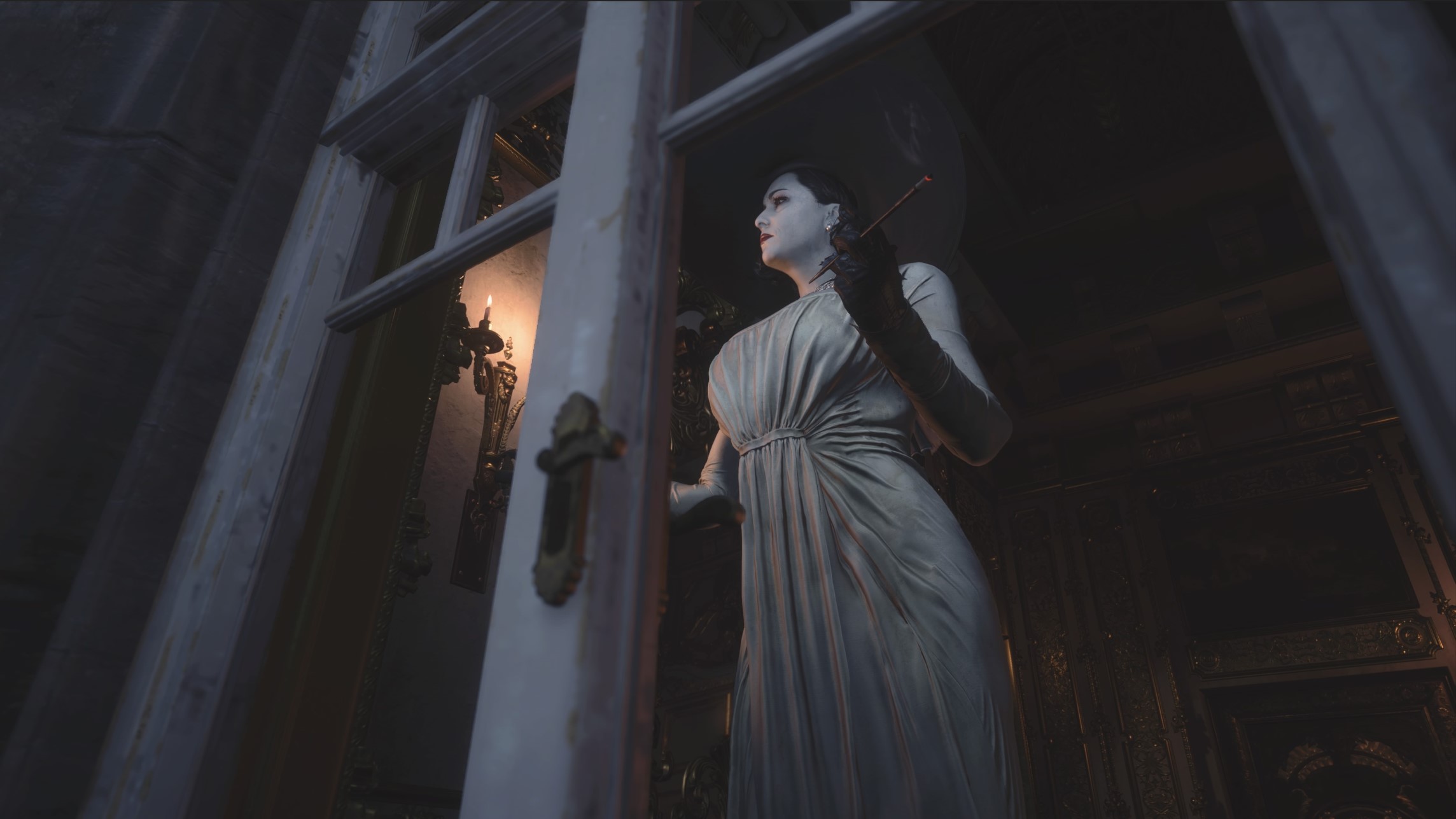 After that’s done, go to the end of the balcony and smash the urn, then push through the gilt door into the bedroom.

Examine the book on the seat, the crib, and then the sconce on the wall for the Dimitrescu key. 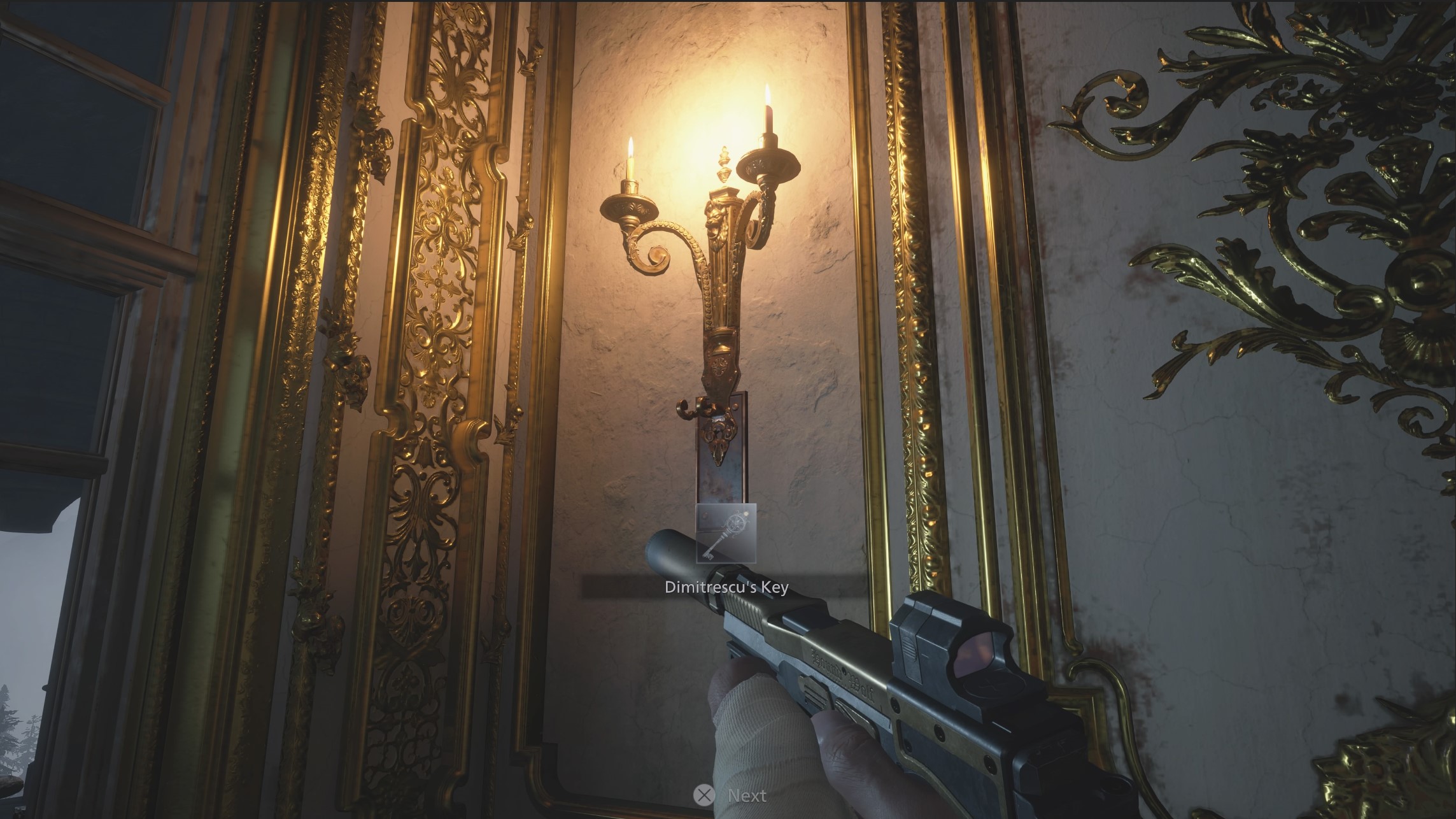 The door on the right is locked, so use your newfound key on the door in front of you and head out into the hallway.

Now you’ll find yourself in a new part of the house. Walk forward and look to the right for some gunpowder, before setting off down the hallway to the left.

Turn left into the next cell, break the crate, then crawl through the hole in front of you. 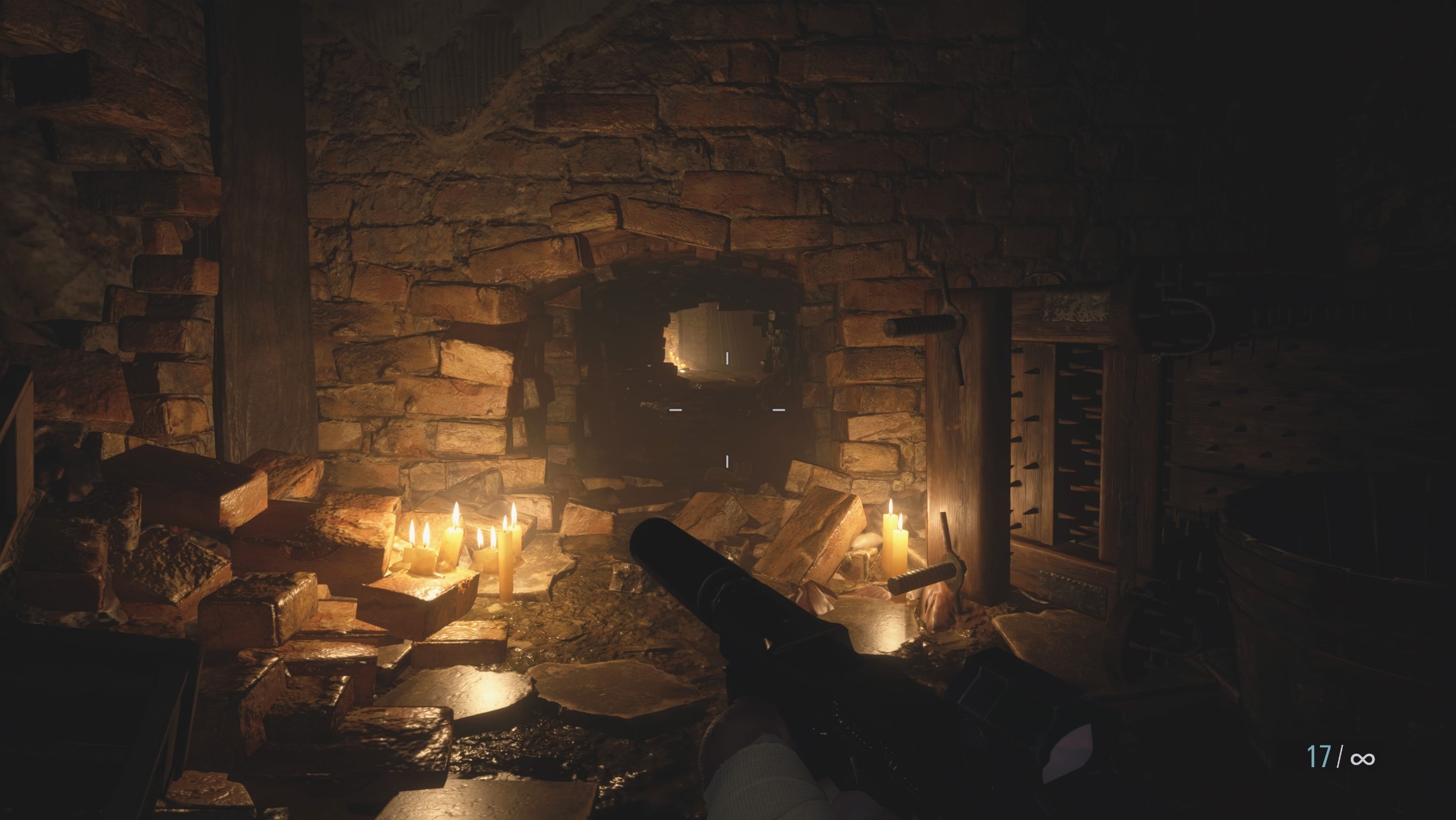 Hit the lever on the other side and continue through the door it opens, and things will open out into the dungeon. 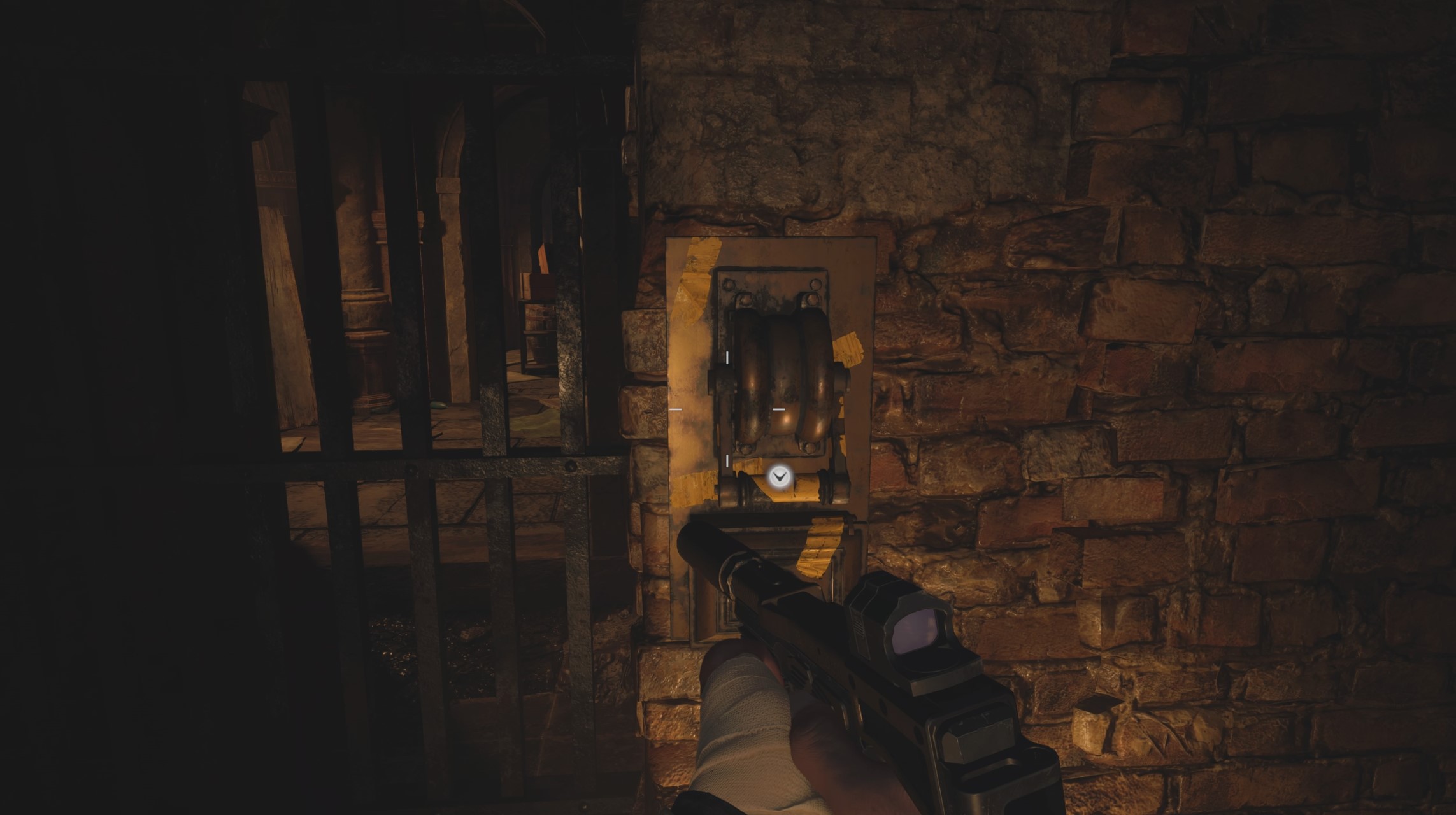 Walk forward, then right, then head into the room in the bottom right corner for some chem fluid and Lei.

Then return to the middle of the dungeon and pull the second lever to advance. 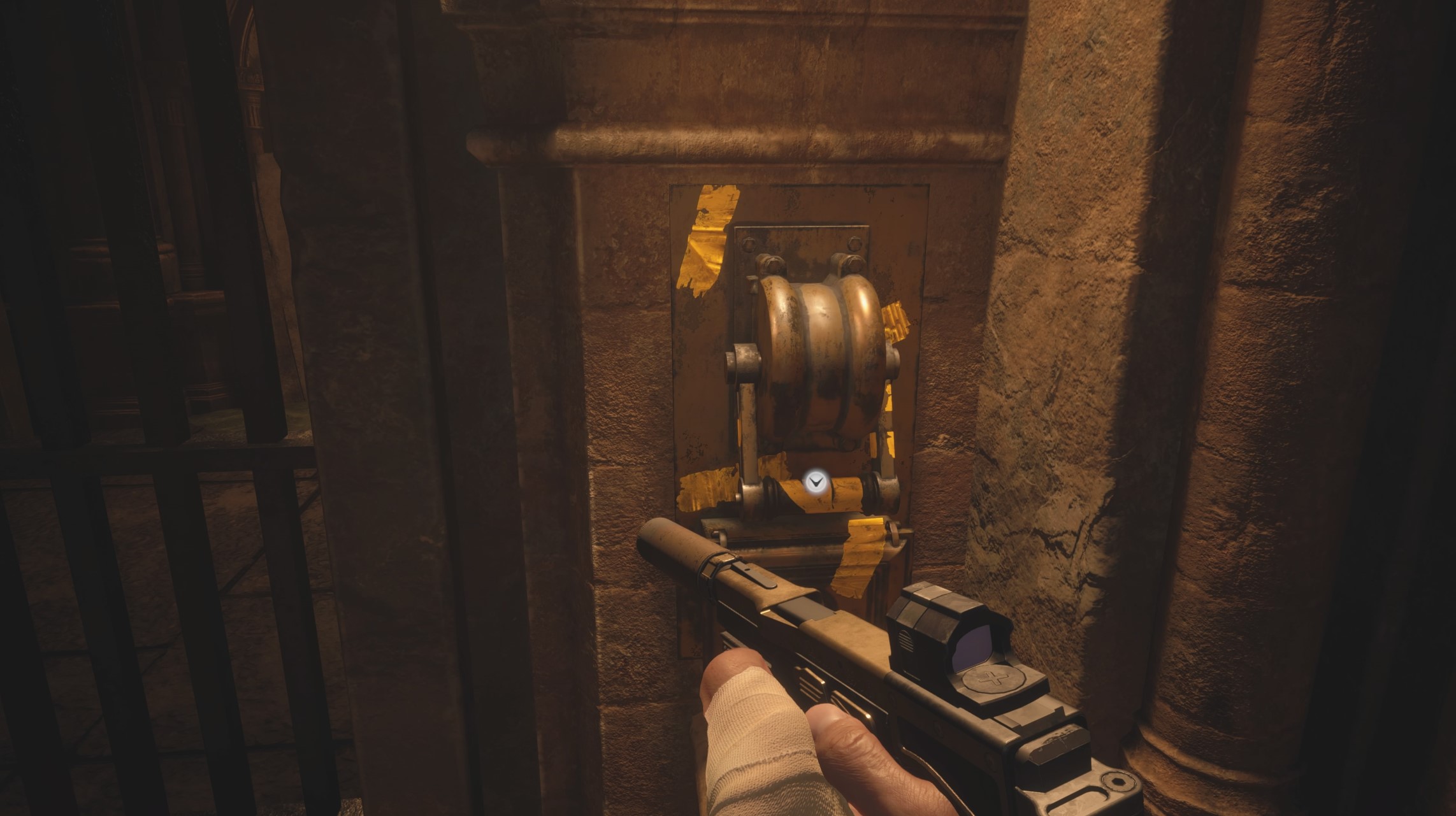 After you’ve pulled the lever, it will become apparent that you need to turn around and book it into the corner behind you.

Let your pursuer walk a little towards you and use a pillar as cover. Once they commit to chasing you on one side or the other, you’ve got a clear shot back to the lever, so sprint past and interact with the handle. 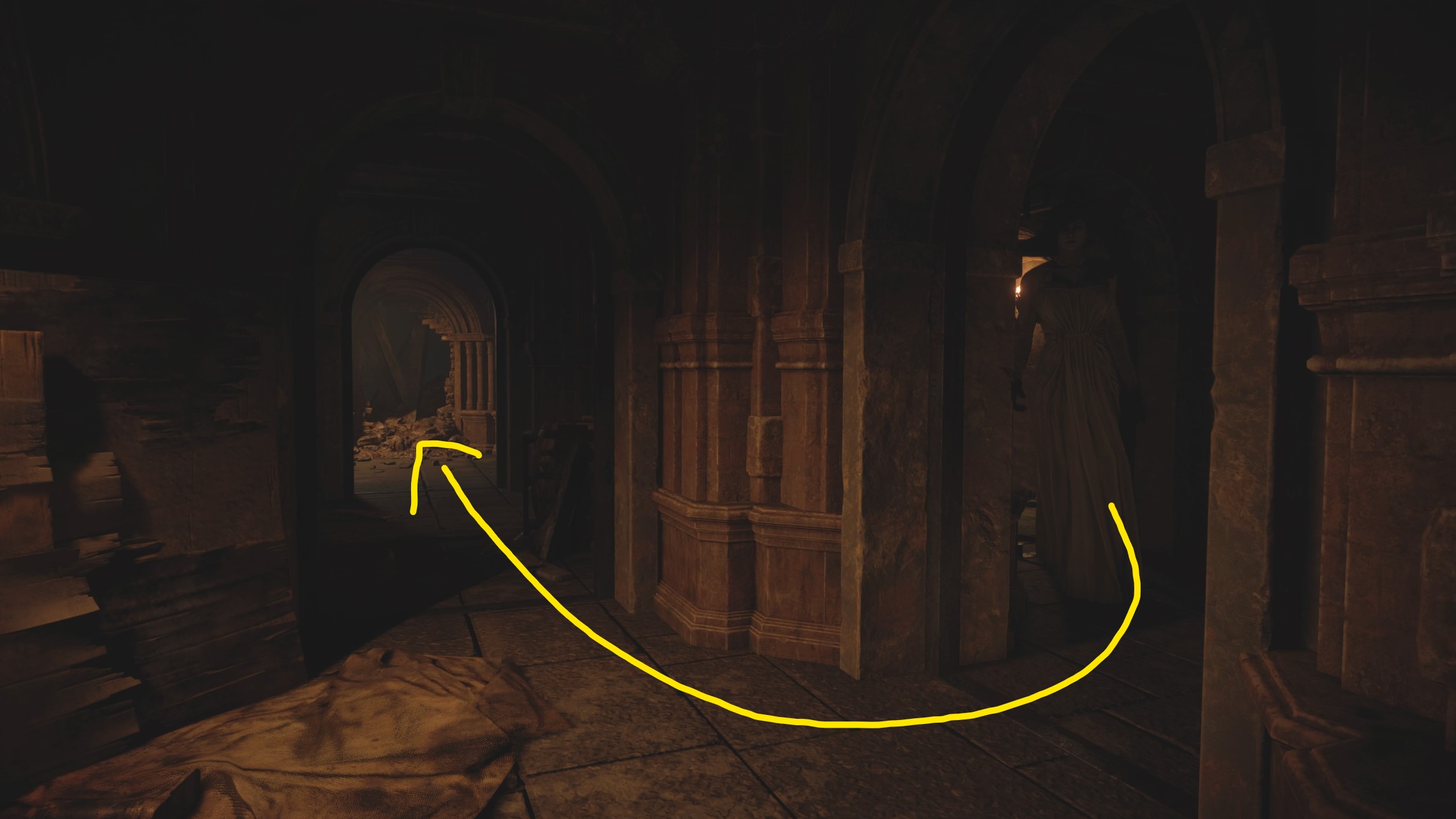 Use the pillars to your advantage again to run away around her largeness, then return to where you hid before to give you another free sprint path to the door when it’s opened.

Through the now open door, your objective is to run around the corner to the left, then up the stairs to the right.

However, you’ll need to make one more loop around to avoid being headed off at the base of the stairs. 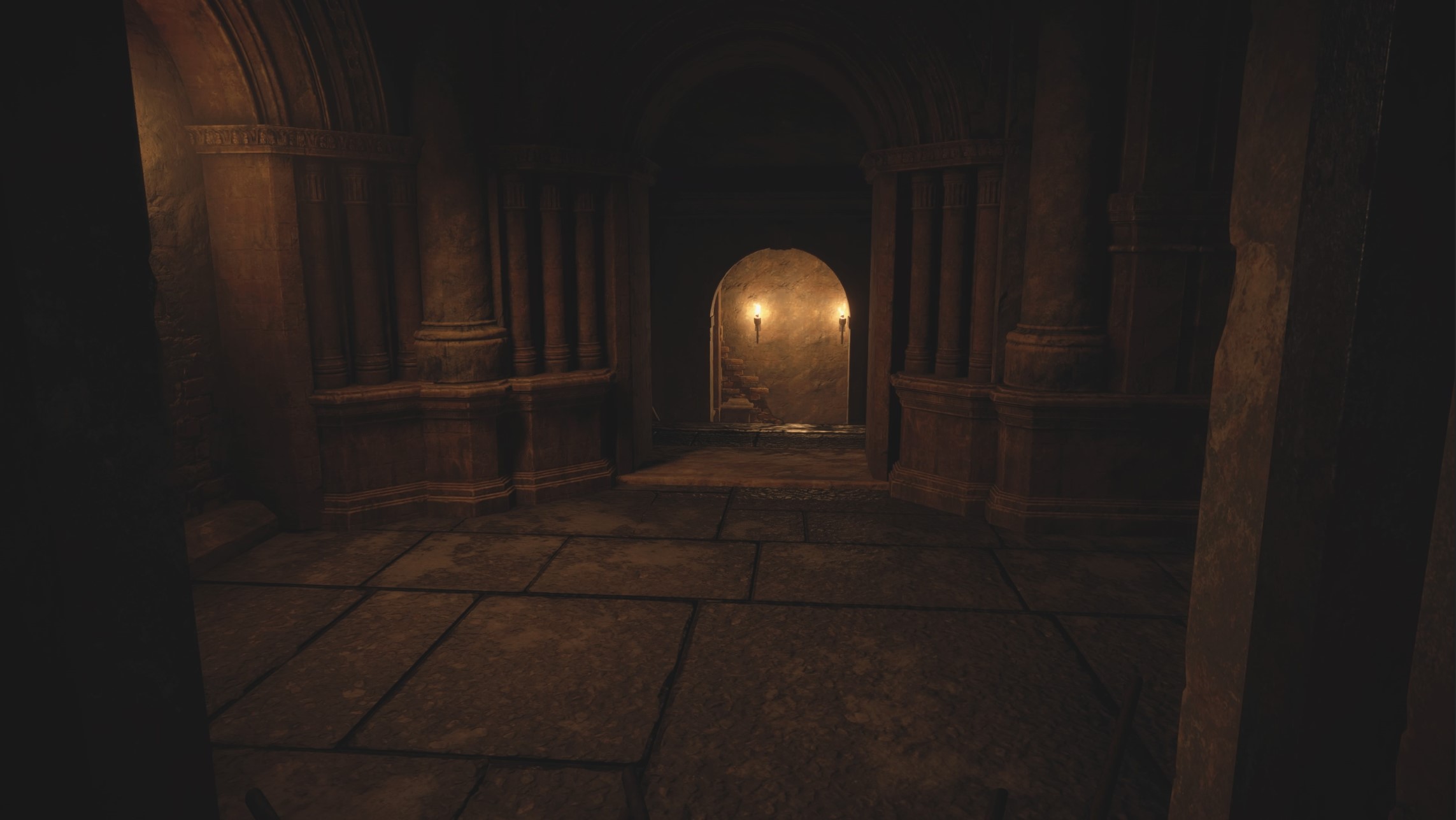 At the end of the staircase, use the Dimitrescu key you found upstairs on the door at the bottom, then take the Mask of Sorrow from the statue in front of you. This activates the elevator. 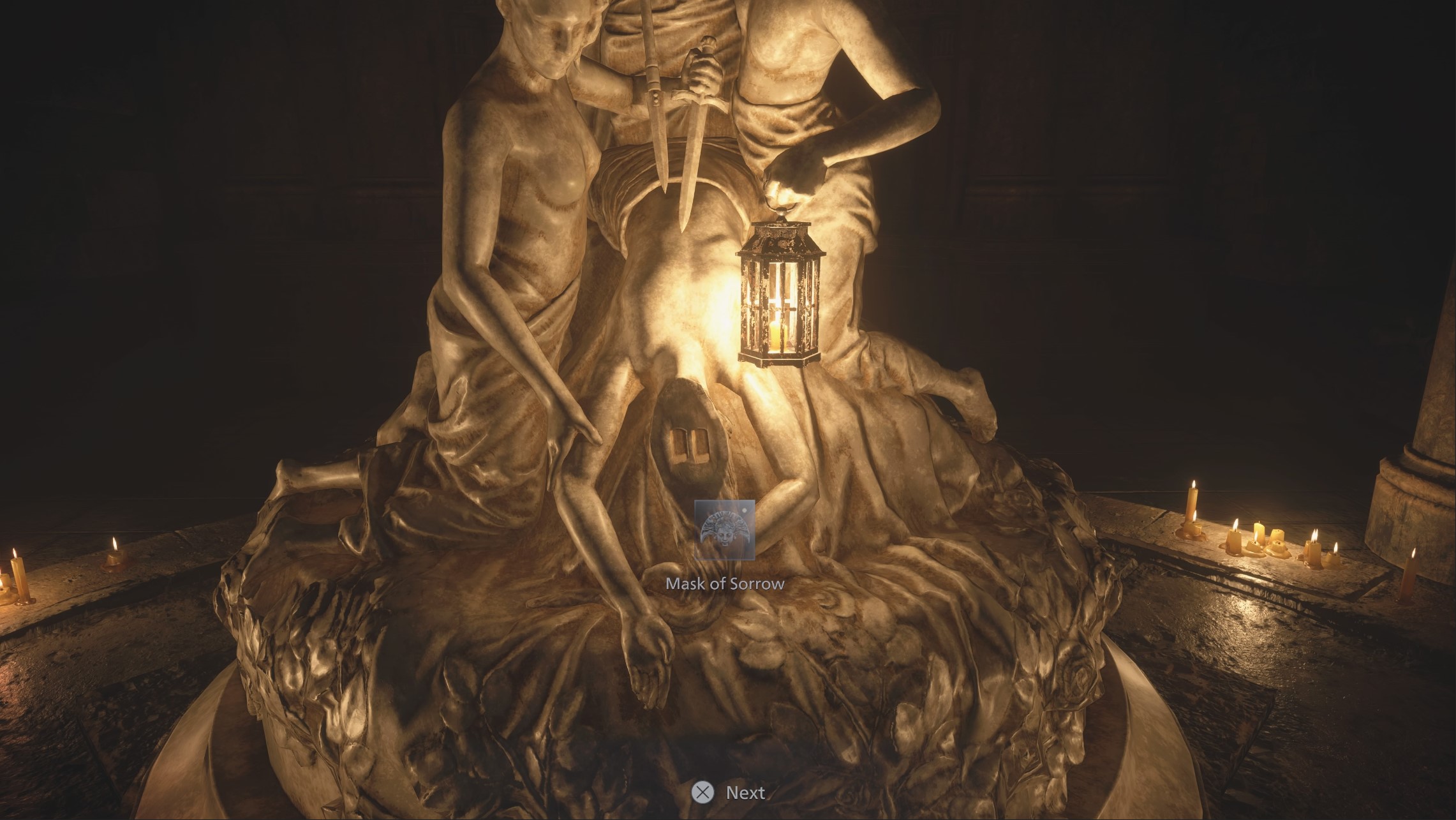 With Ethan’s healing hands working their magic, you find yourself back in the courtyard.

There will be some ghoul dudes to either avoid or kill, but it’s the Dimitrescu door next to you that leads into a new area. 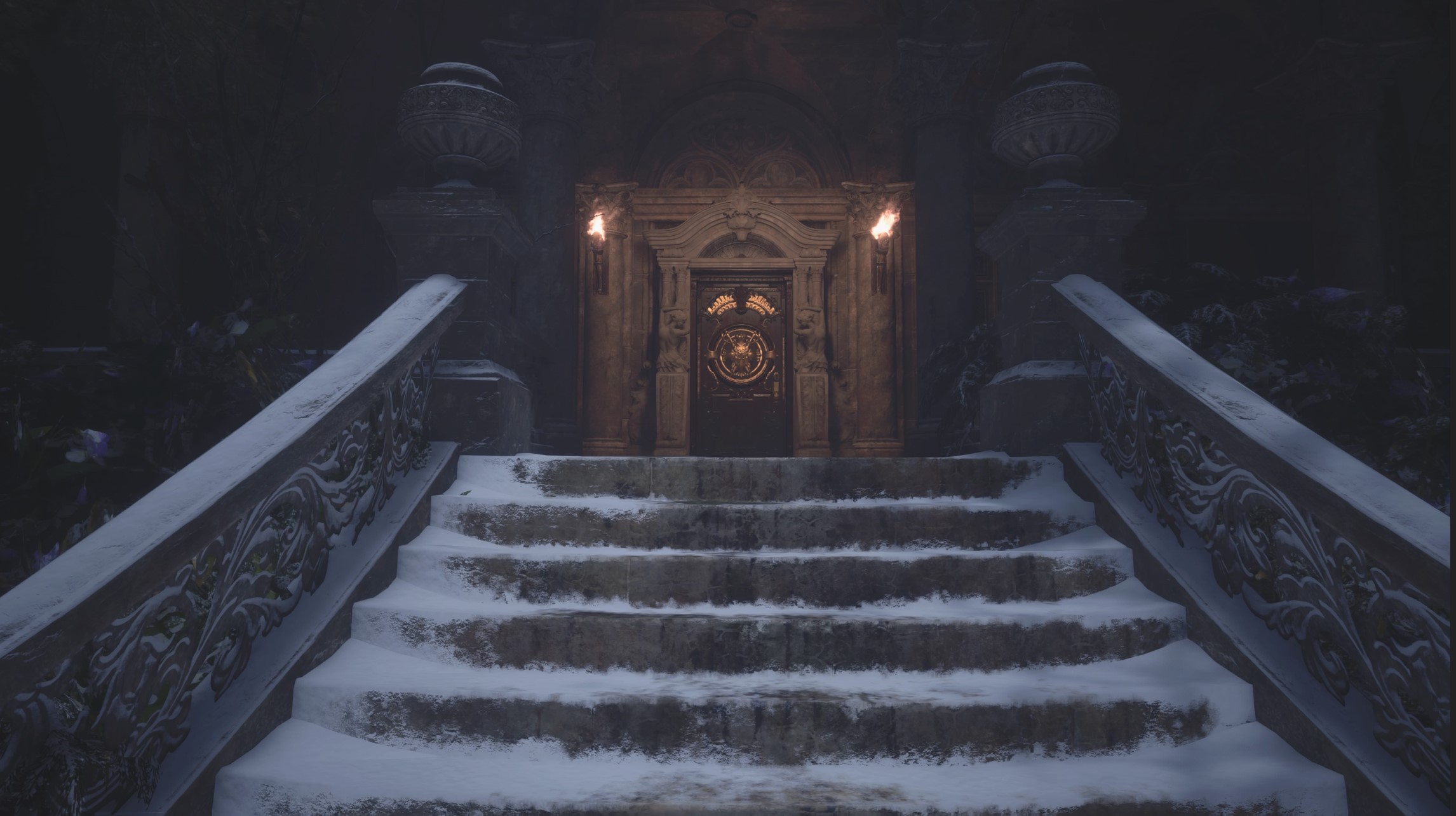 Inside, there’s an annex map of the rest of the castle on the wall, but the door on the right to the Opera Hall is locked.

Go up the stairs. You’ll find that the door on the right is locked, so go left into the Opera Hall. 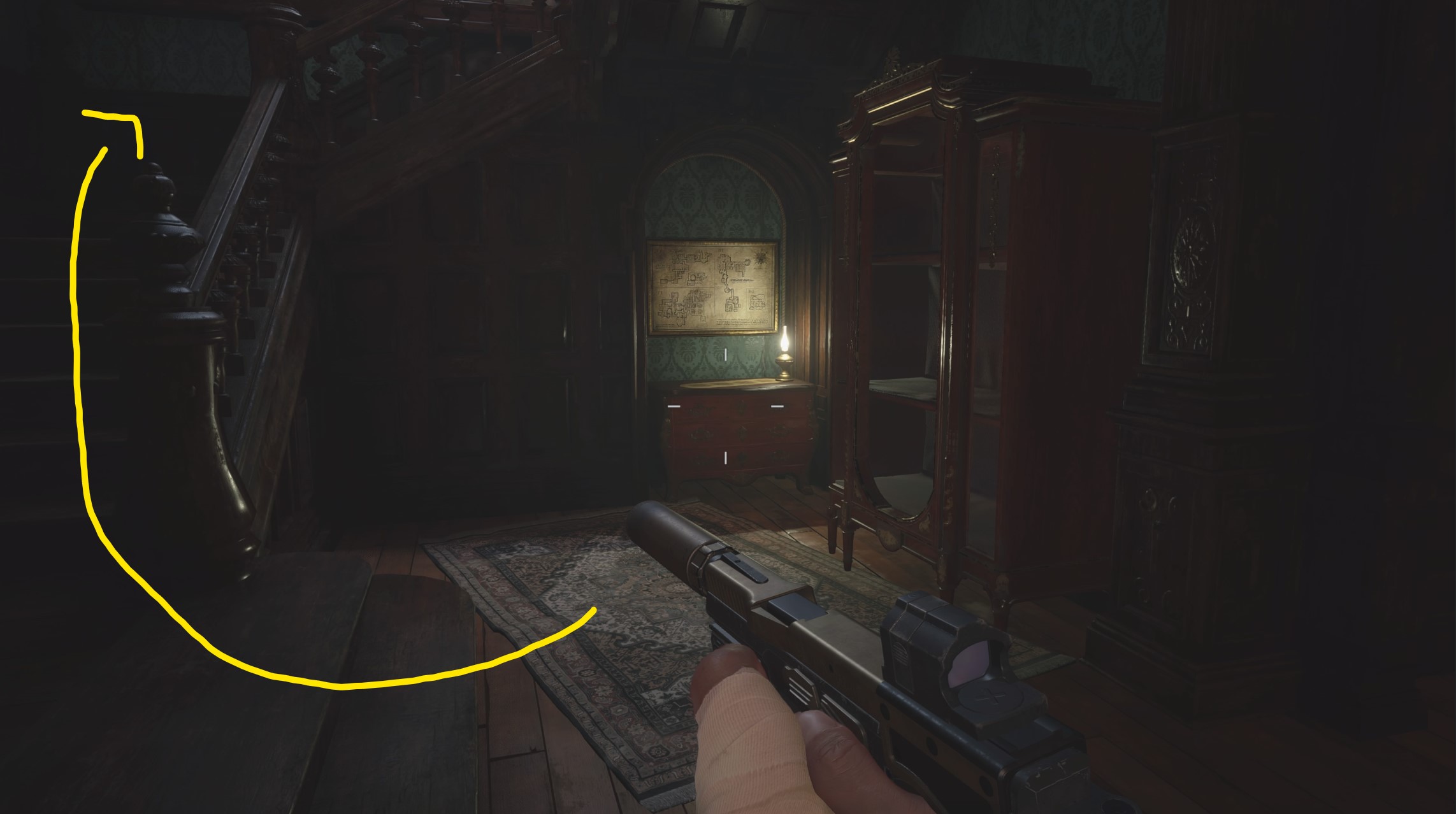 In the ceiling above you is a crystal fragment, then on the dresser in front of you are some notes on the creation of Dimitrescu’s daughters, but head left onto the balcony. 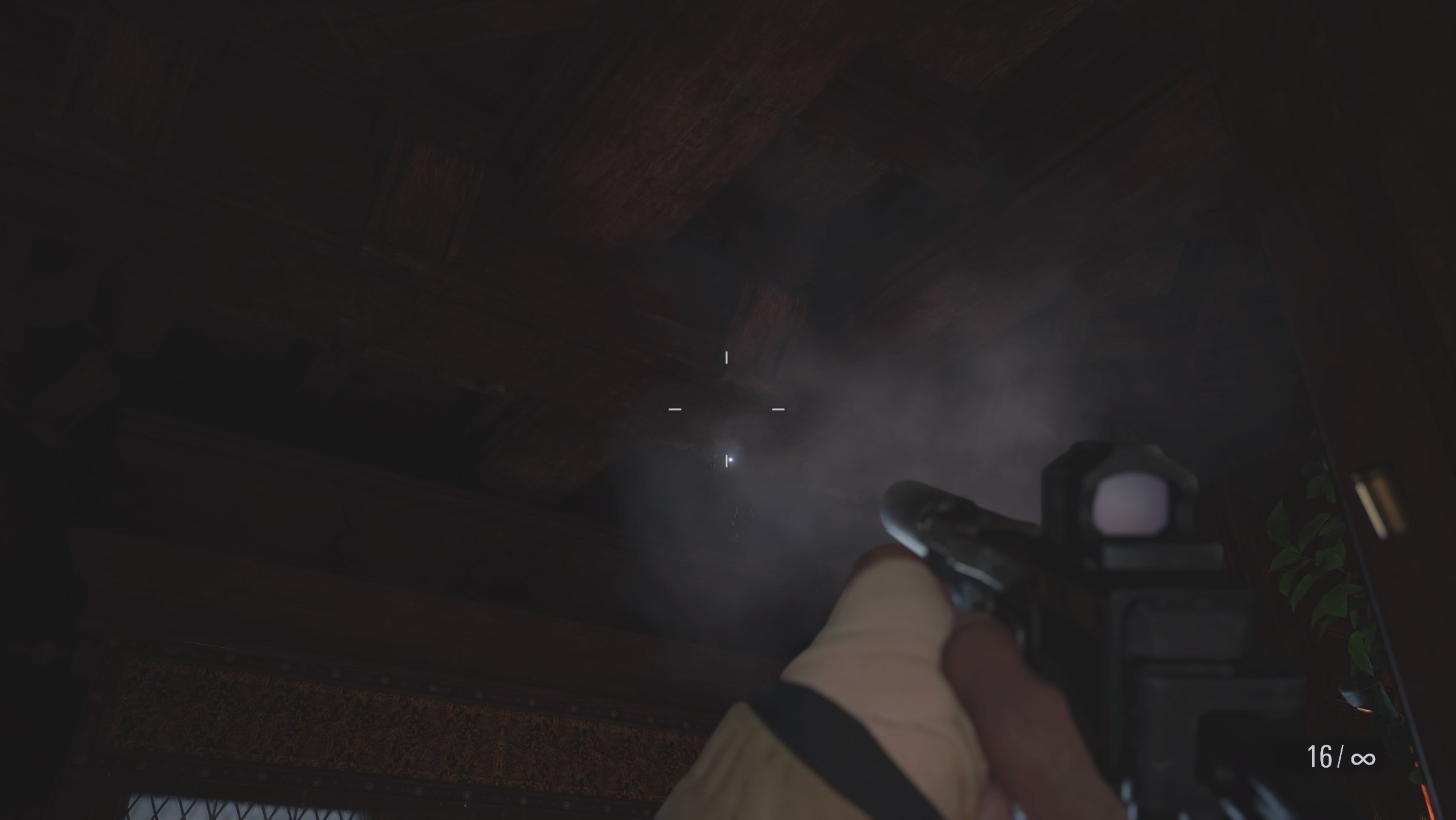 You want to kill the ghoul on the left hand side of the balcony before going downstairs, because next to him is the Flower Swords ball. 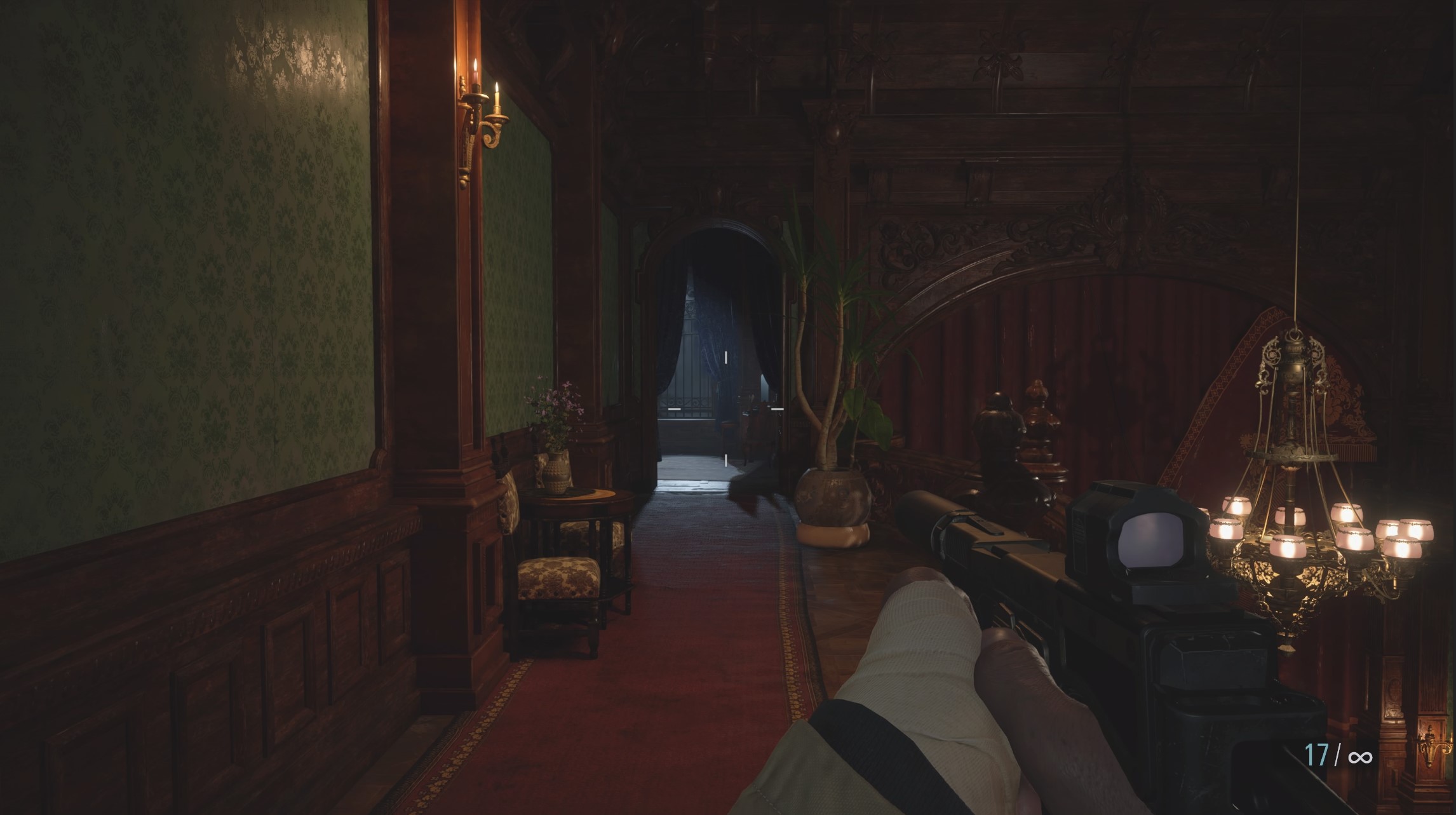 This is what you put in the Labyrinth Puzzle back with The Duke in the merchant room. 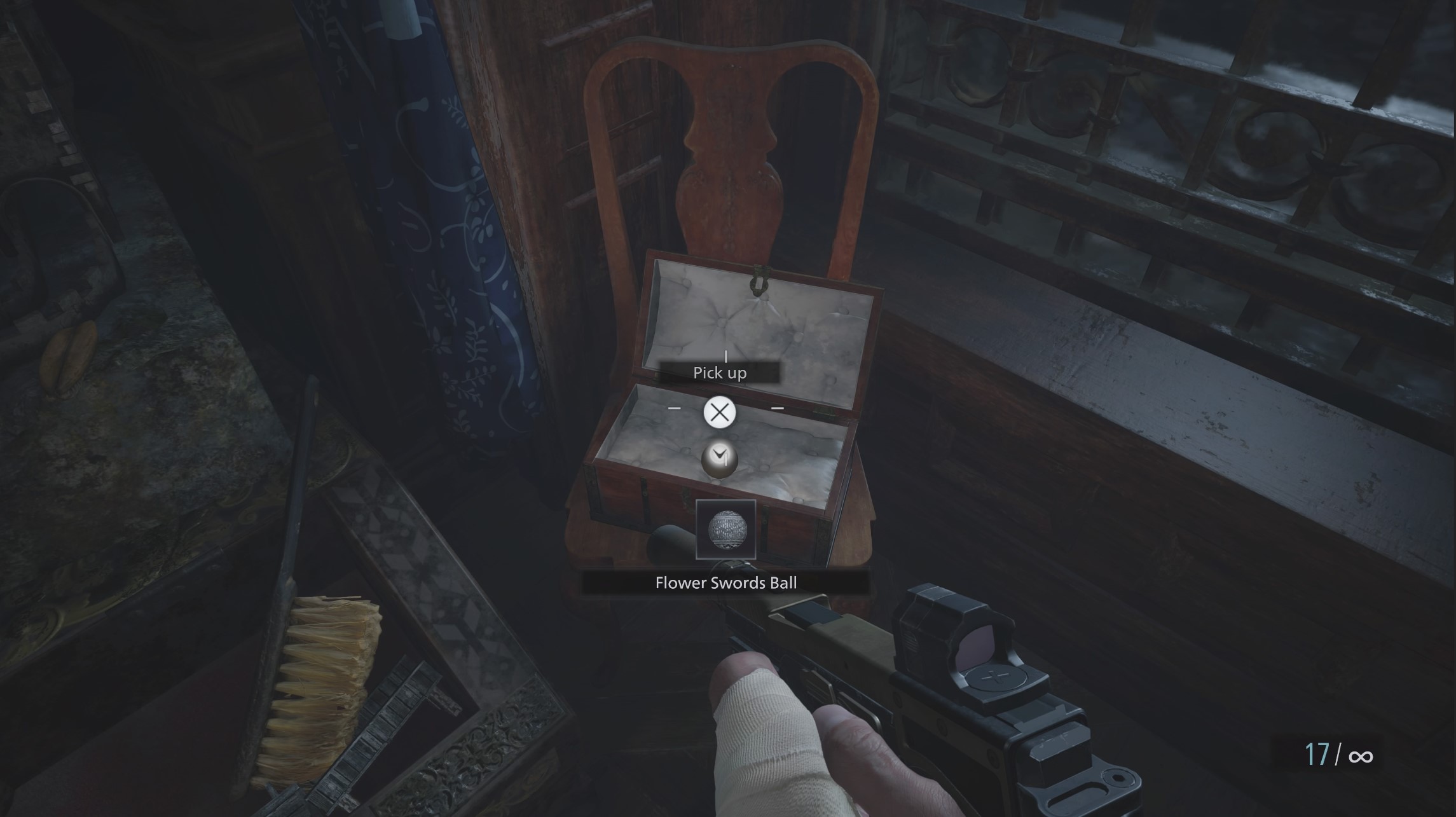 With that safely in your inventory, head over to the other side of the balcony and beat up the ghoul you find there.

The locked cabinet on the left contains sniper rifle ammo if you want it, but either way, go downstairs.

At the bottom on your right is an urn to smash, then there’s some scrap in the fireplace. But after you’ve scoured the room, turn your attention to the middle where you find a musical puzzle we’ll cover in the next part!