Sony boldly claimed to have signed up "almost every major third-party" for the PlayStation 4 during tonight's reveal. 149 companies have been confirmed as onboard, with the majority listed and detailed through the break.

Sony briefly showed a splash page with a huge number of company logos, which you can check out below, and in press releases following the announcement, listed a total of 149 third-parties. Here's a brief run down on the ones we're familiar with; it's not a complete list.

2K - One half of Take-Two, publishes the 2K Sports franchises as well as Mafia and BioShock.

Activision - Hinted at a Call of Duty reveal for PS this year, but also showcased Bungie's Destiny, headed to both PS3 and PS4.

Acquire - Japanese developer behind Way of the Samurai, Shinobido and Tenchu.

Artdink - Japanese developer responsible for many Gundam and Macross games.

ASCII Media Works - Japanese publisher of Dengeki magazine among others, dabbles in publishing.

Atlus - Developer of the Shin Megami Tensei fracnchise. Believed to be working on Persona 5.

Avalanche Studios - Strongly tipped to have a Mad Max game in the works for next-gen, as well as Just Cause 3.

Behaviour Interactive - best know for Naughty Bear but jobs on a huge number of titles.

Bethesda - Probably planning to launch the next Elder Scrolls game on next-generation hardware.

Blitz Games Studios - UK team behind Yoostar and about a million family titles.

Blizzard - Bringing Diablo 3 to consoles, including PS3 and PS4.

Bloober Team - The last remnants of Nibris, which was behind cancelled Wii game Sadness. Currently working on PS3 and Vita MOBA Deathmatch Village.

Certain Affinity - Founded by a couple of ex-Bungie staffers, but mainly works on ports.

Capcom - Showed off Deep Down, a new property headed to PS4, at the PlayStation Meeting.

Codemasters Racing - Makes some of the best racing games in the world. Console transitions are particulaly kind to racing.

CyberConnect 2 - Japanese developer beloved of Capcom and Namco Bandai and famed for its lush cell-shaded visuals. Created the .hack/ franchise as well as Asura's Wrath and makes Naruto games. Is forever hinting at what it's up to next.

Dimps - Jobbing Japanese studio which has had a finger in many, many pies but is best known for recent Sonic games.

Disney - Is very unlikely to not launch Disney Infinity on every platform it can wring a profit from.

Double Helix games - Jobbing US developer with a game about Dracula's Jonathan Harker on the back burner.

Drinkbox Studios - Canadian indie responsible for Tales from Space: About a Blob and sequel.

EA - Definitely has Battlefield and FIFA in the works for next-gen.

Edge of Reality - Jobbing developer with several ports under its belt, working on an original IP called Loadout.

Fatshark - Swedish developer which produced recent success War of the Roses, but also Lead & Gold: Gangs of the Wild West, which was published for consoles by Paradox.

From Software - Makes Armored Core and the Souls series; Dark Souls 2 is coming to current-gen but director Hidetaka Miyazaki is on a top secret project.

Frozenbyte - Finnish indie enjoying success with Trine and its sequel; a third game is likely on the way.

Grasshopper Manufacture - Developer of No More Heroes, Lollipop Chainsaw, Shadows of the Damned, and the upcoming Killer is Dead. Recently purchased by GungHo and making noises about a multiplayer game.

Idea Factory - Developer of a franchise with a complicated naming scheme; Spectral Souls and Blazing Souls are among its offerings.

InXile Entertainment - Carries the legacy of Interplay and seems determined to escape the traditional publishing model after the solid but forgettable Hunted: The Demon's Forge. Working on Wasteland 2, which as a Unity-engine game can go anywhere, and a sequel to Planescape: Torment called Torment: Tides of Numenera.

Keen Games - German developer assisting with Sacred 3, which is yet to be fully revealed.

Klei Entertainment - Independent team with an oddly varied portfolio including puzzle game Eets, the amazing N+, Shank and its sequel, the incredible Mark of the Ninja, and the upcoming survival sim Don't Starve.

Konami - Is no doubt ready to publish Metal Gear Solid: Ground Zeroes on any and all platforms.

Lab Zero, Inc - When Reverge Games fired the Skullgirls development team, they incorporated under a new name. Skullgirls 2 will go everywhere it can, I guess.

Level-5 - Best known for the Professor Layton series but made White Knight Chronicles, a kind of MMO-lite for PS3, as well as the stunning No No Kuni.

LucasArts - Makes Star Wars games, obviously. Star Wars 1313 is expected to ship on both generations although nothing has been confirmed.

Mediatonic - Made Robot Unicorn Attack and working on Foul Play.

MercuryStream - Spanish developer of the Castlevania: Lords of Shadow series. Is moving on to something new.

Namco Bandai - Japanese publisher with strong European and US presence; has forged a strong relationship with From Software.

Nicalis - A frankly charming small developer and publisher which highlights indie games like NightSky, The Binding of Isaac: Rebirth and Cave Story.

Ninja Theory - Developer of DmC, Enslaved: Odyssey to the West, and most notably Heavenly Sword, a PS3 launch title. Is probably not sitting on its hands now that DmC has shipped.

Nixxes - Has ported a lot of games for Square Enix and would probably quite like to make its own game now.

Platinum Games - Critically-lauded developer of Metal Gear Rising: Revengeance, Bayonetta, and Vanquish. Can't make too many games for our tastes.

Quantic Dream - Showed off a new PS4 exclusive engine at the PlayStation Meeting and is believed to have a new game in the works.

Rebellion Developments - Struck gold recently with Sniper V2 but has had a rought time of it on consoles elsewhere. See: Neverdead, Aliens vs Predator.

Rockstar - Makes Grand Theft Auto. Seriously. What more do you want? (Update: you want Agent, the PS3-exclusive which was never formally cancelled. Thanks, Jessica.)

Saber Interactive - Plucky team with experience alongside 343 Industries; gave it's all with inversion but fell flat and is working on God Mode.

Sega - Has gazillions of dollars to spend thanks to its non-gaming businesses, and recently picked up Company of Heroes developer Relic Entertainment. Also owns the Creative Assembly, but is probably going to make a Sonic game, let's be honest.

Slant Six Games - Canadian indie that ought to go back to SOCOM after the disaster of Resident Evil: Operation Raccoon City. Was said to be working on something with Microsoft, which presumably isn't its PS4 project. Has been linked to Star Wars: Battlefront Online.

Splash Damage - Modders turned pros responsible for the Enemy Territory games. Leapt onto consoles with the poorly-received Brink, and has a couple of mysterious irons in the fire as well as multiplayer shooter Dirty Bomb.

Stainless Games - Recently reacquired the rights to its Carmageddon property.

Starbreeze Studios - Makes interesting and divisive shooters such as The Darkness, Syndicate and The Chronicles of Riddick: Assault on Dark Athena. Recently announced Payday 2, and is working Brothers: A Tale of Two Sons and the deeply mysterious Storm.

Telltale Games - Made about a gazillion dollars with The Walking Dead last year. Currently working on an adaptation of comic Fables.

Turtle Rock - Working on a next-gen project codenamed or possibly even titled Evolve. Take Two picked it up in THQ's auction.

Ubisoft - Showed off Watch Dogs today but is almost certain to bring Far Cry and Assassin's Creed to new platforms.

Wayforward Technologies - Employs possibly the most accomplished sprite artists in the industry. Think Bloodrayne: Betrayal and A Boy and his Blob, as well as Silent Hill: Book of Memories. Has a couple of unrevealed projects on the go.

See our report for full coverage of the PlayStation 4 reveal. 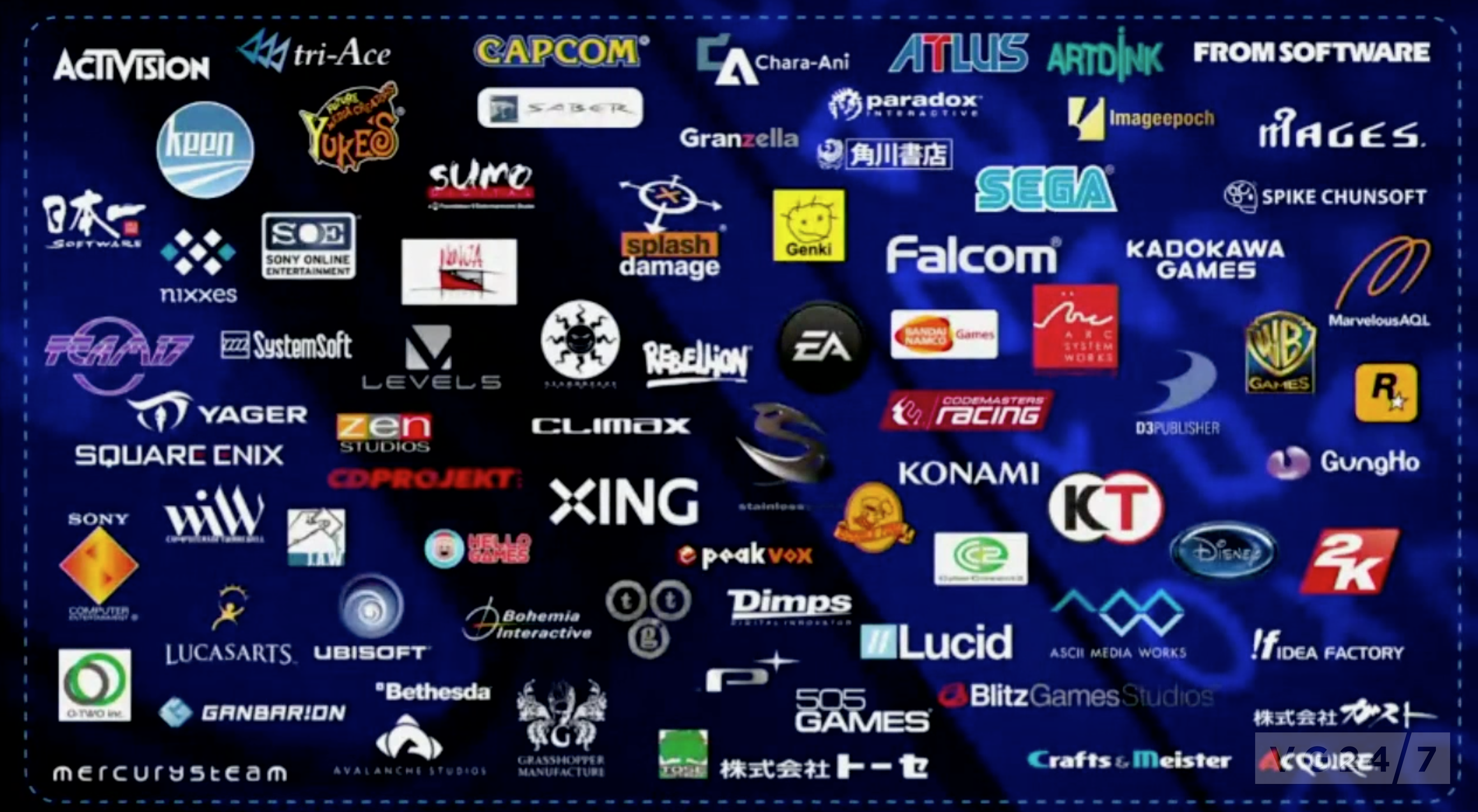