PlayStation 4 was announced in New York today, and is due by the end of the year. Get all the details and the scoop on next-gen games.

PS4: All the details

DriveClub is Evolution's Studios new "dream" racer for PS4; it has to be seen to be believed.

InFamous: Second Son coming to PS4. Check out the trailer.

Jonathan Blow's The Witness will be console-exclusive to the PS4.

Quantic Dream has developed a new engine for PS4.

Capcom has a new game codenamed Deep Down headed to PS4.

Watch Dogs is coming to PS4. Check it out in action.

Destiny is coming to PS3 and PS4, with exclusive content. We even saw some gameplay.

The presentation began in the usual way, with flashing lights and a slick marketing video declaring that "PlayStation wants to win" the war, using imagination as a weapon. A montage of curent and past PlayStation titles like Gran Turismo, God of War and LittleBigPlanet heralded Sony's declaration that it grew up "different" and a "renegade"

Sony boss Andrew House then took the stage. "The stakes are high for what we're going to show you," he said, saying Sony's making a "bold leap" by strengthening the PlayStation ecosystem with hardware, software and network interfacing.

The living room is no longer the centre of entertainment, House said - the gamer is. He talked up connectivity between devices and social aspects, and promised Sony will continue to unlock the Vita's potential, as well as expand to smartphones and other mobile devices - with details to come later this year.

All this was leading into the news we all knew was coming: PlayStation 4. It's real.

Cerny said that Sony is very proud of the Cell architecture the PS3 used, but with the PS4 it wanted to ensure nothing came between the gamer and the game. It spoke to developers and used their feedback to construct a new system which would enable development, not complicate it, using familiar components.

The new console will be PC-like to develop for, with 8GB of RAM and almost two teraflops of power. An Unreal Engine 4 demo was shown. 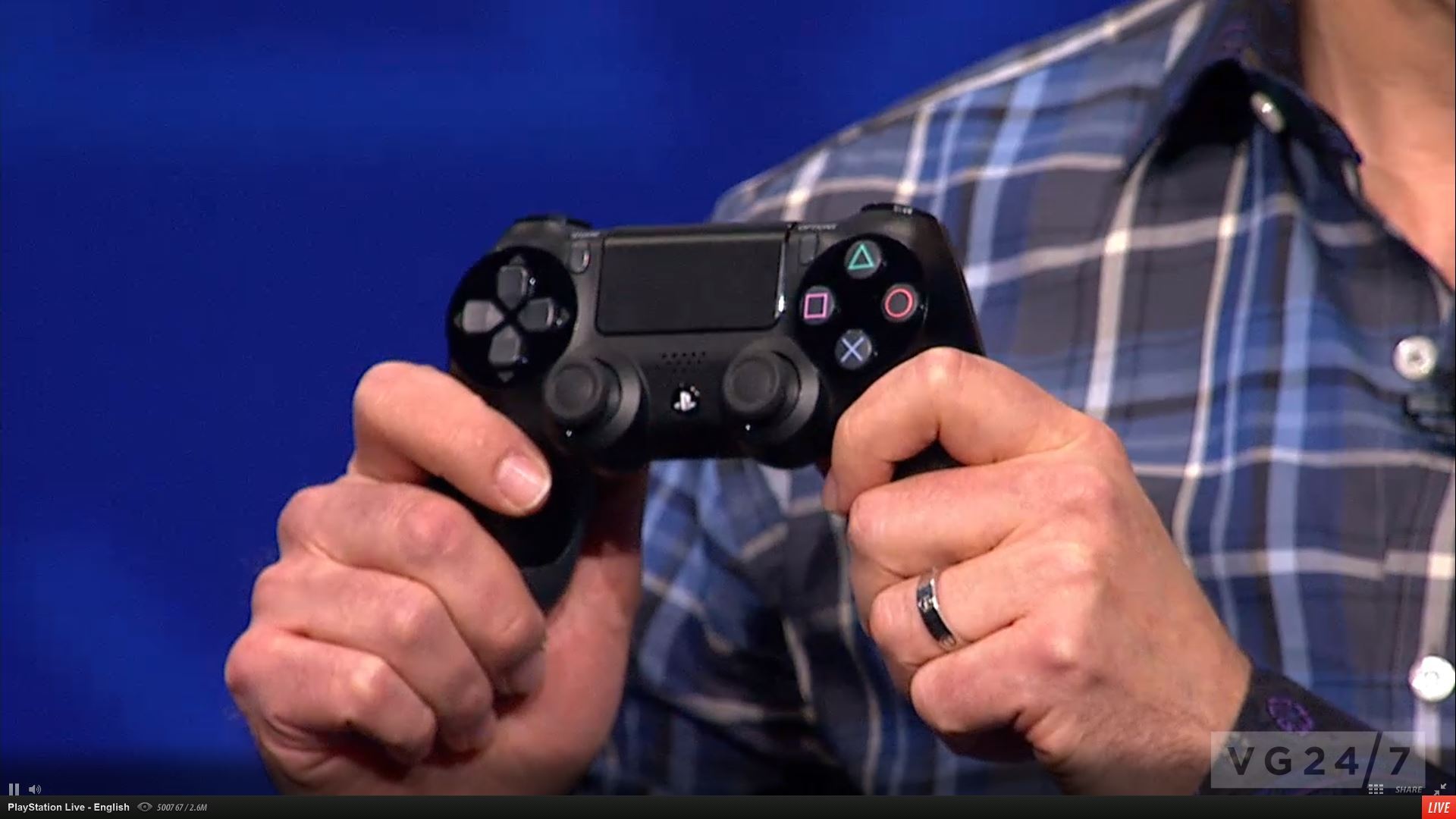 He then showed off the Dual Shock 4, also produced in conjunction with developer feedback. The controller has improved triggers, sticks and rumble; reduced latency; and a headphone jack. As rumoured, it includes a touch pad and motion sensor, and partners with a camera.

Cerby said the new console has a lower power state which can be initiated or cancelled with a single button press. It can be triggered in-game, with play state preserved in RAM.

Steph is on-site in New York and will have a full report in the morning. No pricing details were given. PS4 is said to be launching at £300, according to documents that leaked over the weekend.

Cerny said digital games can be played even as they are being downloaded, and some clever video tech means seamless upload of gameplay recording using share button.

Players can spectate others' play over a network - and even take over gameplay from them to assist in difficult sections. Developers will be able too implement systems where players can donate items to others.

A new friends system will be based on social networks, enhancing connections between "real-world" acquaintances. Facebook and Ustream were mentioned.

The network will also learn from the player, using metrics to determine what kind of games you might be keen on. "Our long term goal is to reduce download times to zero," Cerny said. 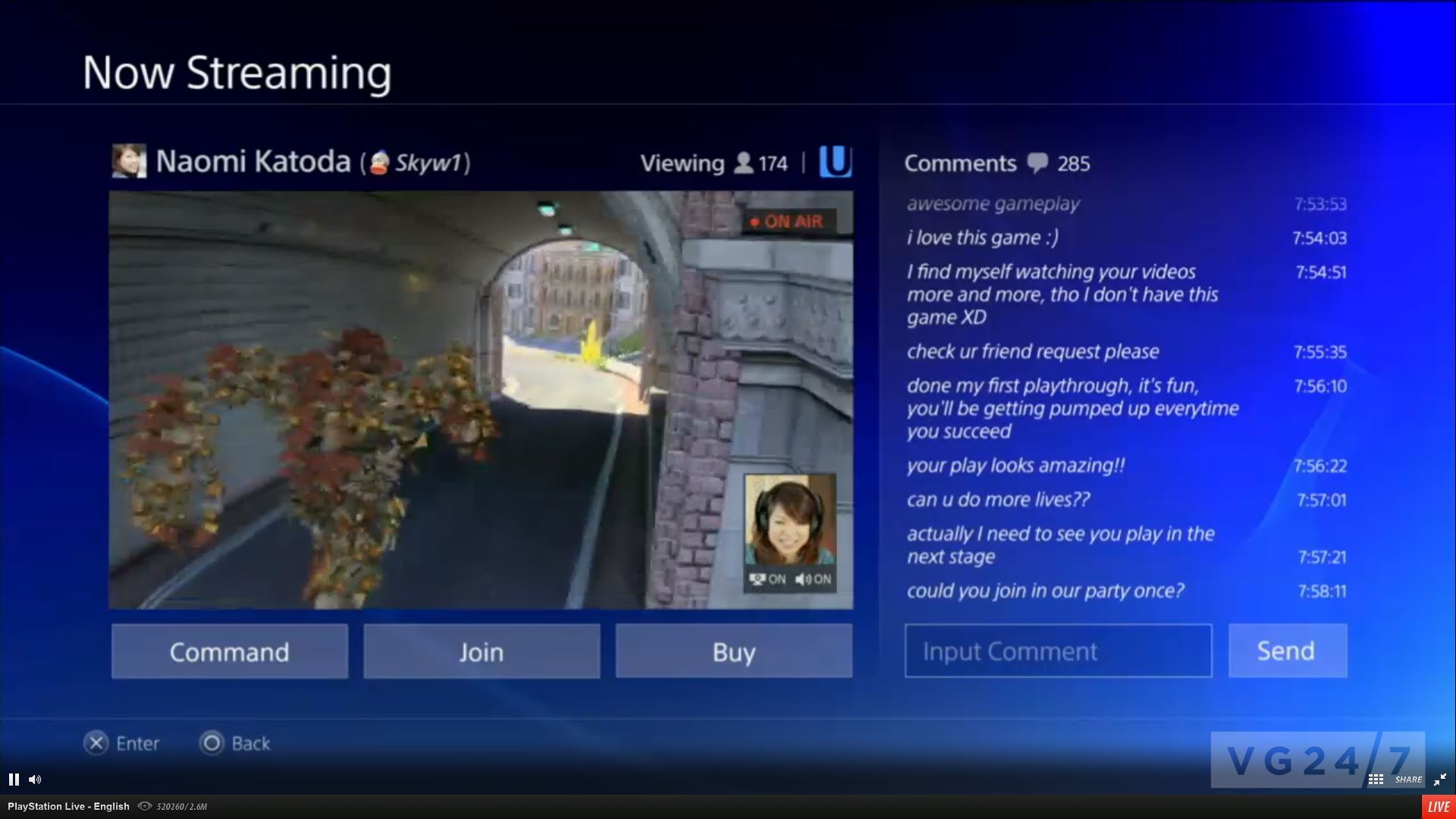 Gaikai CEO Dave Perry was next to present, saying that Gaikai and Sony's long term goal is to make all games available instantly from the PlayStation Store.

"Try it for free, share it if you like it, and pay only for the games you fall in love with," he said.

Perry also announced Vita Remote Play for the PS4. Like the Wii U's Game Pad, the console will be able to stream games directly to the handheld, allowing you to play while your TV is busy elsewhere. Sony said its long term goal is to make every title compatible.

The PS4 will support existing SEN services such as Music Unlimited, and Sony's working to bring companies like Netflix onboard.

Perry said Sony has fully greenlit a project to make every PlayStation 1, 2, 3 games playable via PlayStation Cloud, a service accessible from all PlayStation devices. It will be rolled out in phases.

In a hype reel, Sony talked up its ambition to eliminate update, download and install times - something the PS3's detractors will be pleased to note.

Early in the presentation, Sony said all game demos were "live", suggesting they're running off a PlayStation 4, not pre-rendered footage.

Later, we got a look at Killzone: Shadow Fall. The first-person perspective video showed an incredibly detailed future city which looked like something out of a cutscene, but Steph confirmed she could see a player controlling the demo, and it quickly transitioned into a shooting section. There were some beautiful light and dust effects, and character animations were remarkably lifelike.

I was already having a little cry of joy when Sony brought out Matt Southern from Evolution Studios to show off the game the studio has "always wanted to make". DriveClub was trademarked nine years ago - "we've literally waited for the technology to become available", Southern said.

DriveClub is all about working in teams - collaborative driving. Players form real clubs, and battle others in asynchronous and real-time multiplayer. It connects to mobile devices so players can issue challenges and win glory for their clubs. "Weekend long, thousand-player tournaments" are on the cards, apparently.

Southern said Evolution has worked with the best car manufacturers in the work to recreate the cars in "loving obsession" with custom built photo-metric apparatus. "We've gone borderline insane," Southern said, detailing how every layer of paint; the microfibres of interior trim; and the amount of wax on headlights have been recreated. The fabric even looks different depending on which way the material has been brushed, he claimed.

Next, Sony reaffirmed its commitment to the indie scene by introducing Braid creator Jonathan Blow, whose next game, The Witness, will be console exclusive to PlayStation 4; a PC version is probably still on the cards, though. Blow boasted that the open-world puzzler has 25 hours of gameplay and "no filler". Detractors of adorable side-scrolling indies will be delighted to learn the first-person view showed full 3D graphics.

Quantic Dream's David Cage followed, saying that all he wants from next-gen hardware is the opportunity to convey emotion and get players involved with games. He said that the PS4 has brought games to the point where it can finally live up to films for emotive potential. The developer has created a new engine for the console.

Characters in Heavy Rain were a couple of thousand polygons; the Kara tech demo characters had 20,000; Beyond: Two Souls will have about 30,000, Cage said. He didn't give a figure for PS4, instead showing a render of an old man's face, but said there are no more limitations besides imagination. Cage did not announce a new game, obliquely referencing "future titles". 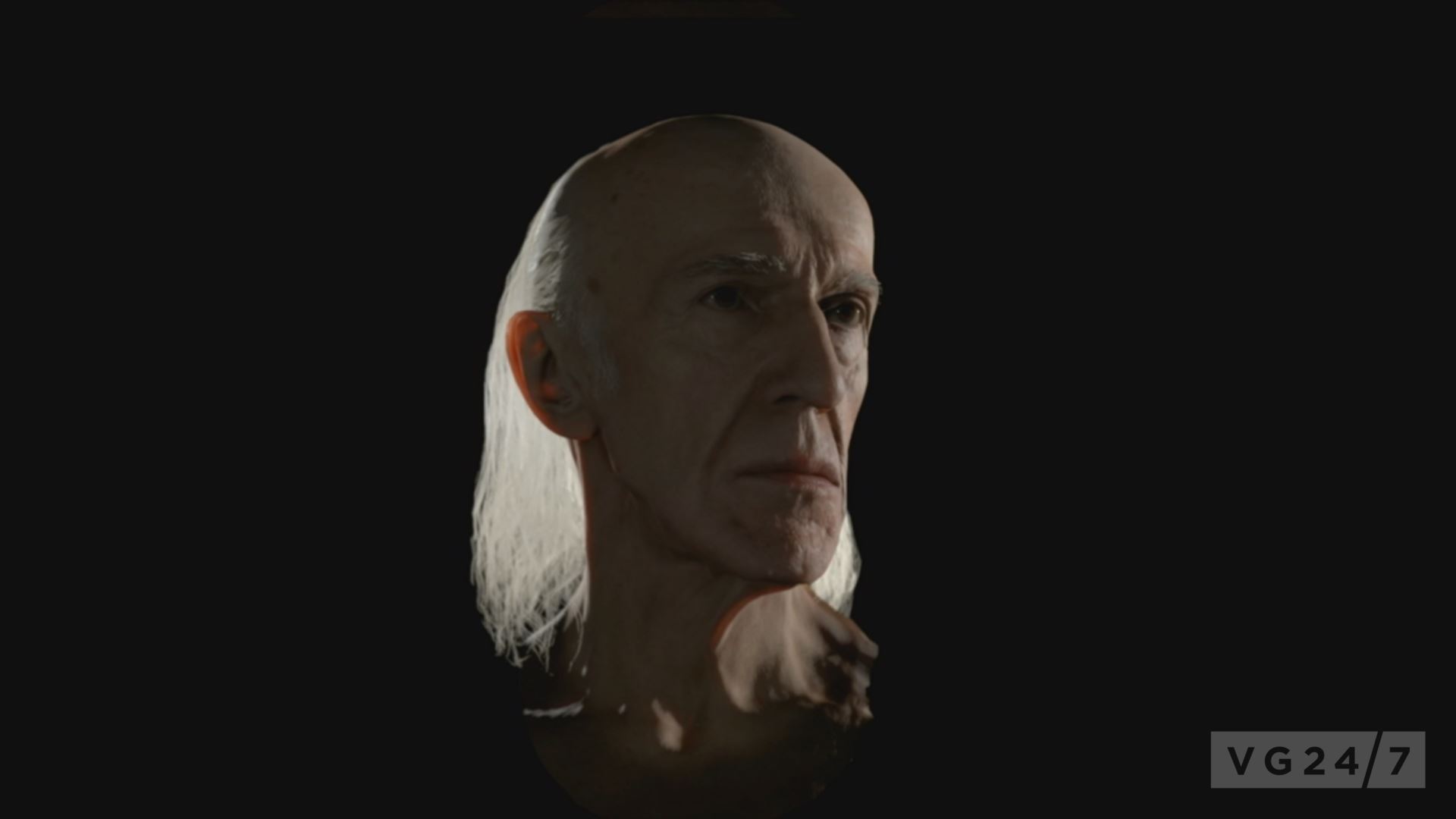 Media Molecule turned up next, ready to unveil its "mystery". Alex Evans said the developer wants to help people create, and to "cut through all the crap", and allow users to "record their dreams". Wanting to escape the "tyranny of the polygon", the team spent years working on ways to allow users to create digitally using technology like motion capture.

In the end, Media Molecule chose the Move controller, noting that it hadn't like it at first. "Dear Move controller, I'm sorry it took us so long," Evans said, showing off real-time 3D sculpting. "You just hold your controller and click to create your dream," he added.

As well as sculpting and collage, the tool allows users to control characters, giving performances which are then recorded. Four Media Molecule staffers were shown controlling characters playing drums, keyboard, and guitar, and dancing, to result in a short film. No title was given for the tech demo; it's not clear if it will evolve into a commercial release.

"It feels good to finally be able to talk about this stuff," Ono said, giving a brief history of how PlayStation and Capcom have enjoyed a mutually beneficial relationship. The publisher has a new engine for next-gen, the Panta Rhei, and Ono introduced a new property - Deep Down.

The demo showed medieval-style characters engaged in combat with some kind of draconic beastie, which breathed some lovely fire. The characters were overwhelmed and the screen cut to Yoshi Ono sending a request for help over the SEN.

Square Enix sent its chief technology officer to present the Agni's Philosophy Luminous Engine demo; it's not a game, and we've seen it before, but this time it was demonstrated running on the PS4, not high-end development PCs.

There were grumblings from the peanut gallery but Square Enix then announced a new Final Fantasy title to debut at E3 2013.

Ubisoft was next, showcasing Watch Dogs which, as expected, is set to arrive on PlayStation 4 at system launch. The publisher reiterated the game's smartphone connectivity - players will be able to view maps to tap into traffic controls and other services - before moving onto a demo, again played live on stage by a demonstrator, but this time on a PC.

Protagonist Aiden was seen using his phone to access information about NPCs as he wandered the open world before becoming embroiled in a fire fight and fleeing police. The city's security camera network was used to locate him, showing the two-edged sword of surveillance.

Blizzard owes me a new monitor, because by turning up on a console stage it caused me to do an amusingly extravagant spit take. Chris Metzen confirmed Sony and Blizzard have entered into a strategic partnership through which it will "take over the world". Diablo 3 is coming to PS3 and PS4, he confirmed.

The console version isn't just a port; it has a new control method whereby players are directly in control of a character's actions rather than triggering abilities from hotkeys, and will have a four-player, full-screen co-op mode.

One final publisher turned up to the party - Activision. CEO Eric Hirshberg promised full support for the PS4 with "multiple titles" from its "best developers during the launch window". More information was promised later this year, hinting at a Call of Duty reveal, but while Infinity Ward wasn't ready to show anything, Bungie is: Destiny. The sizzle reel shown included some brief snippets of in-engine footage.

Bungie staff said they're very excited to expand to a larger audience now that it's no longer Microsoft-owned, and confirmed the shared worlds shooter is coming to both PS3 and PS4, and will have exclusive content specifically for the PS4.