Activision pledged its support for PS4 at Sony's reveal event tonight with Bungie's MMO shooter Destiny. It has many games coming for the console's launch window. 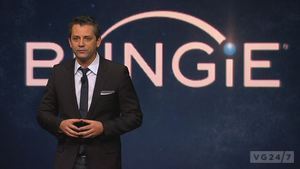 CEO Eric Hirshberg took to the stage to announce Destiny for PS4, and showed off some in-engine footage live at the show. Bungie promised a persistent online world where palyers grow and customise their characters. It's a highly cooperative experience.

Footage was shown of a player reloading a high-calibre sniper rifle, and characters walking around stunning vistas.

We covered the initial Destiny reveal at length when it first broke cover. Check out our full coverage on what Destiny is and why it could be epic here.