Capcom's Yoshinori Ono took to the stage at Sony's PS4 reveal event tonight, to pledge the publisher's support for the console with a new engine codenamed Panta Rhei. 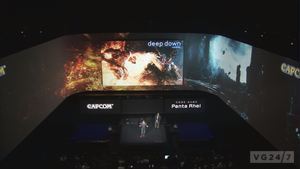 The engine will harness next-gen technology, allowing Capcom to take its games in bold new directions. Ono showed a new IP concept running on the engine, a new IP codenamed 'Deep Down'. It looked like Dragon's Dogma 2.

It showed a heavily armoured knight fighting a dragon in an icy cavern. It told players to 'conquer their fear' or 'die a coward'. It then showed a social concept that saw the knight asking fellow PS4 players for help in taking down the monster, and in sharing resources.

Get our full coverage of the PS4 reveal event here.