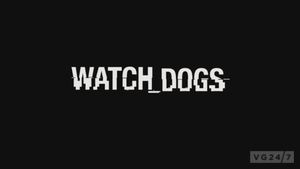 Guillemot set out his stall for PS4, revealing deeper, richer more connected experiences on the console. The world has become connected to smartphones, but in Watch Dogs the planet will be covered by 'Smart Cities' where everything is connected.

In the game you will wander the city of Chicago and hack into everyone's lives. Ubisoft then showed a new gameplay demo, which focused on the city, as barges floated down a vast river, and people went about their daily lives, all connected and broadcasting to the world.

The camera then swung down to gameplay - featuring the same character from the E3 presentation, as he strolled along a stunning street, and hacked into a woman's bank account using his phone. He then approached a 'Smart Car', locked to the owner's ID.

He started hacking it until a commotion started, as a man pulled a gun on a woman. The character then pulled out his gun and tried to shoot him, but the perp gave chase, sparking a tense sprint through the city's back alleys. Catching the guy, the protagonist lunged, taking him down before brutally beating him with a stick.

However, instead of being thanked by the police, the protagonist was then chased over rooftops by cops, suggesting he is perhaps deep undercover and blurring the lines between the law and crime. Escaping on the roof of a train, the demo ended, but just as it did at E3, Watch Dogs impressed once again.

The demo shown at the PlayStation Meeting was free-roaming, not from a mission sequence, and was running on a PC - but Watch Dogs will be a PlayStation 4 launch title.

Check out all of our coverage from the PS4 reveal event here.