Revenue and profit both down year-on-year, which EA attributes to Medal of Honor: Warfighter's failure and investment in "gen four" content, notably Battlefield and FIFA.

FIFA and Battlefield 3 are EA's "two biggest brands". Medal of Honor "out of rotation".

The publisher posted revenue of $922 million for the quarter ending December 31 2012, a year-on-year decrease from $1.06 billion.

This resulted in a net loss of $45 million, but that's a significant improvement on the same quarter a year before, when EA lost $205 million.

Mobile revenue was up, providing $86 million as opposed to Q3 FY2012's $70 million, but both traditional publishing and distribution revenues were down, with packaged goods in particular tracking about 20% down year-on-year industry wide.

In a post-release conference call, CEO John Riccitiello described the results as "below expectations and guidance" and said it was "primarily the result of a miss" with Medal of Honor: Warfighter which performed "well below expectations" and "didn't deliver". COO Peter Moore said the game's focus on authenticity didn't win over consumers and polarised critics, whom he believes gave unfairly low review scores.

Whatever the cause, the franchise is being "taken out of rotation", so don't expect a 2014 entry, but EA has "a plan to bring year-over-year continuity" to its "shooter offerings". It did not elaborate on this.

Medal of Honor will return to EA's line-up after it's had a "rest".

EA made reference to "softness in the packaged goods market" and a "challenging quarter", but Riccitiello hinted that EA's losses may also be partially due to forward-looking investment.

"We are investing for the future wave of growth that we foresee in digital and console," he said.

"Consumers are behaving in a way that reflects a console transition," he added, saying the hits do well but "losers are getting hit hard".

"Console transitions are difficult, but historically they represent opportunities for growth," he added, confirming that EA is working on "gen four consoles and content". It's not clear what this unusual term means, as by conventional count we're in the seventh generation at present.

The publisher said it has "signalled" that it's working on next-generation releases for its "two biggest franchises", Battlefield and FIFA, and said more details would be shared in May, when it provides guidance for the next financial year.

EA's lowered profit margin may also be attributed to its continuing share repurchase program, which cost it $157 million during the quarter, and the deferral of Battlefield 3 Premium revenue to Q4.

“EA had six of the top twenty titles in Western markets in 2012, compared to four in 2011,” Moore said. “EA was also the #1 publisher on iOS worldwide for the year.”

On a game by game basis, FIFA 13 sold through over 12 million units through the third quarter, a 23% increase on FIFA 12. FIFA 13 digital revenue topped $100 million in the quarter, a 98% increase on FIFA 12. Total FIFA digital net revenue reached over $230 million (adjusted) in the first nine months of FY2013. FIFA Online 2 and FIFA World Class Soccer together accounted for $60 million of this.

The Madden franchise also showed growth, but this was not detailed. NCAA and NHL were down; the latter was attributed to the lockout. 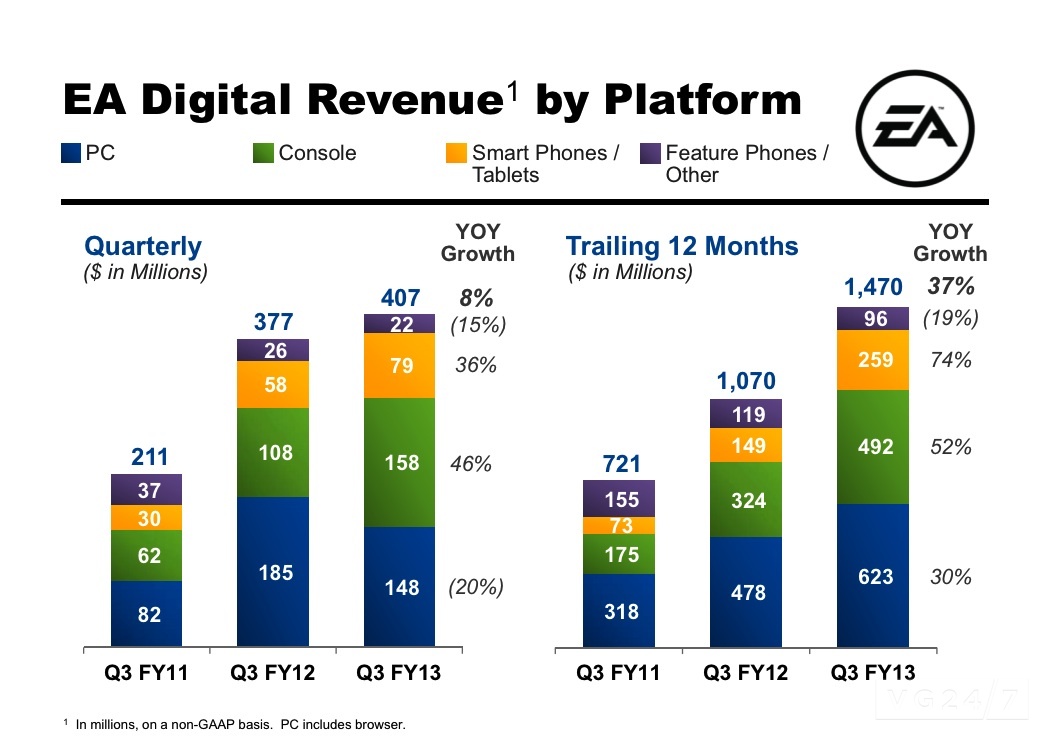 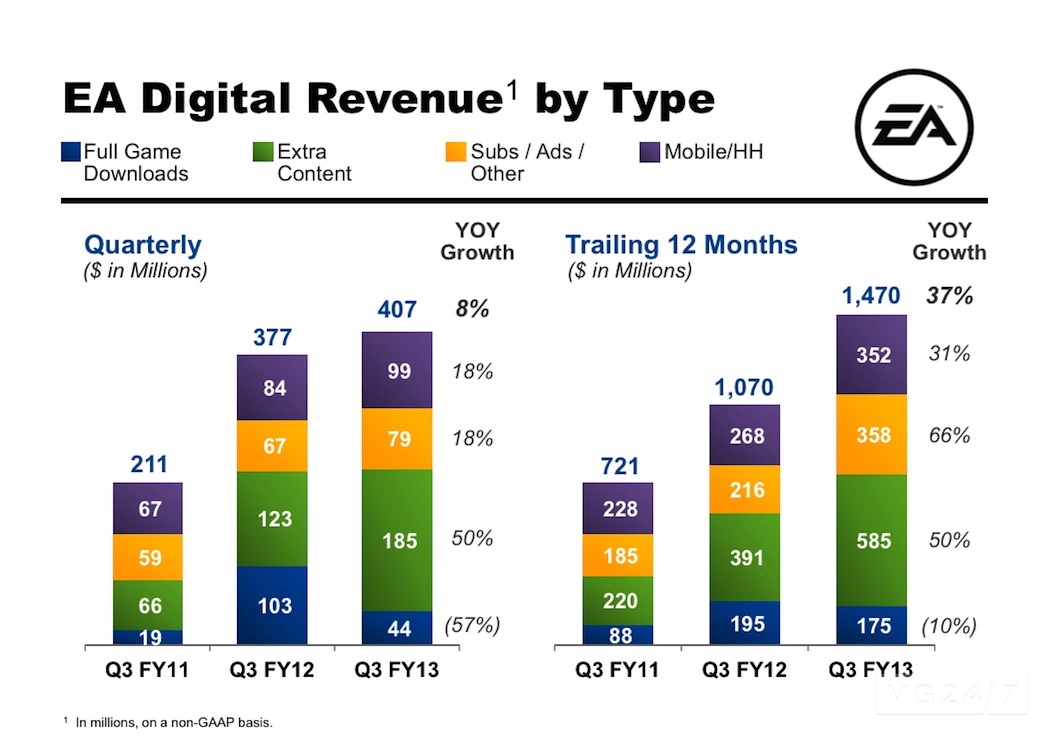 Battlefield 3 Premium generated over $108 million in adjusted sales through the third quarter, and has 2.9 million subscriptions to date. EA said that Battlefield 3, along with FIFA, is now positioned to become one of the most important digital platforms in the industry.

The Simpsons: Tapped Out was one of the top grossing iOS games for the quarter, with over $23 million in adjusted revenue.

Regarding Star Wars: The Old Republic's free-to-play option, introduced in November, EA said "very early indications have been positive", but it is "still too early to tell" how the new membership will perform in the medium and long term.

Outlining its strategy for the months to come, EA reiterated its three "pillars" scheme, which focuses on developing brands, building platforms like Origin and FIFA, and hiring key talent. The publisher cited a trend of increased digital revenue as justification for its continued commitment to this sphere. In the post-release call to investors, EA said it expects full game downloads to increase in popularity.

In the next quarter, EA is optimistic about deferred Battlefield 3 Premium revenue, FIFA Ultimate Team and mobile, Dead Space 3, Crysis 3 and SimCity, but despite this strong line-up it has adjusted its forecasts downwards.

The publisher said it expects a "high level of challenge and uncertainty" due to the "softness" experienced in the third quarter. As no major releases have dropped in the last few weeks, EA said its not sure how the market is trending post-holiday and won't know until Dead Space 3 drops, so it's forecasting conservatively.

You'll notice Insomniac's Fuse isn't listed above; EA has delayed it into Q1 FY2013 (calendar Q2 2013). Insomniac is said to be "polishing" and doing "extra work" on the co-op title.