With the final release of Outriders out in the wild, you now have full access to a vast array of powerful weapons in both traditional and space-age styles to collect. But if you want to search out the most extraordinary ordinance on Enoch, you need to lay your hands on legendary weapons.

Outriders’ legendary weapons are very strong, often not only boasting a sky-high firepower level, but also come packing a unique ability which far exceeds the regular fare you can find.

What's more, once you've found a unique gun, you can dismantle it for parts and craft its mod into any other weapon in your inventory.

Some of the legendary guns synchronise more with the different playstyles of each of Outriders’ classes. With that in mind, we’ll show you not only where to find legendary weapons in Outriders and how to farm them, but give you a run-down of every one we’ve seen so far as well. 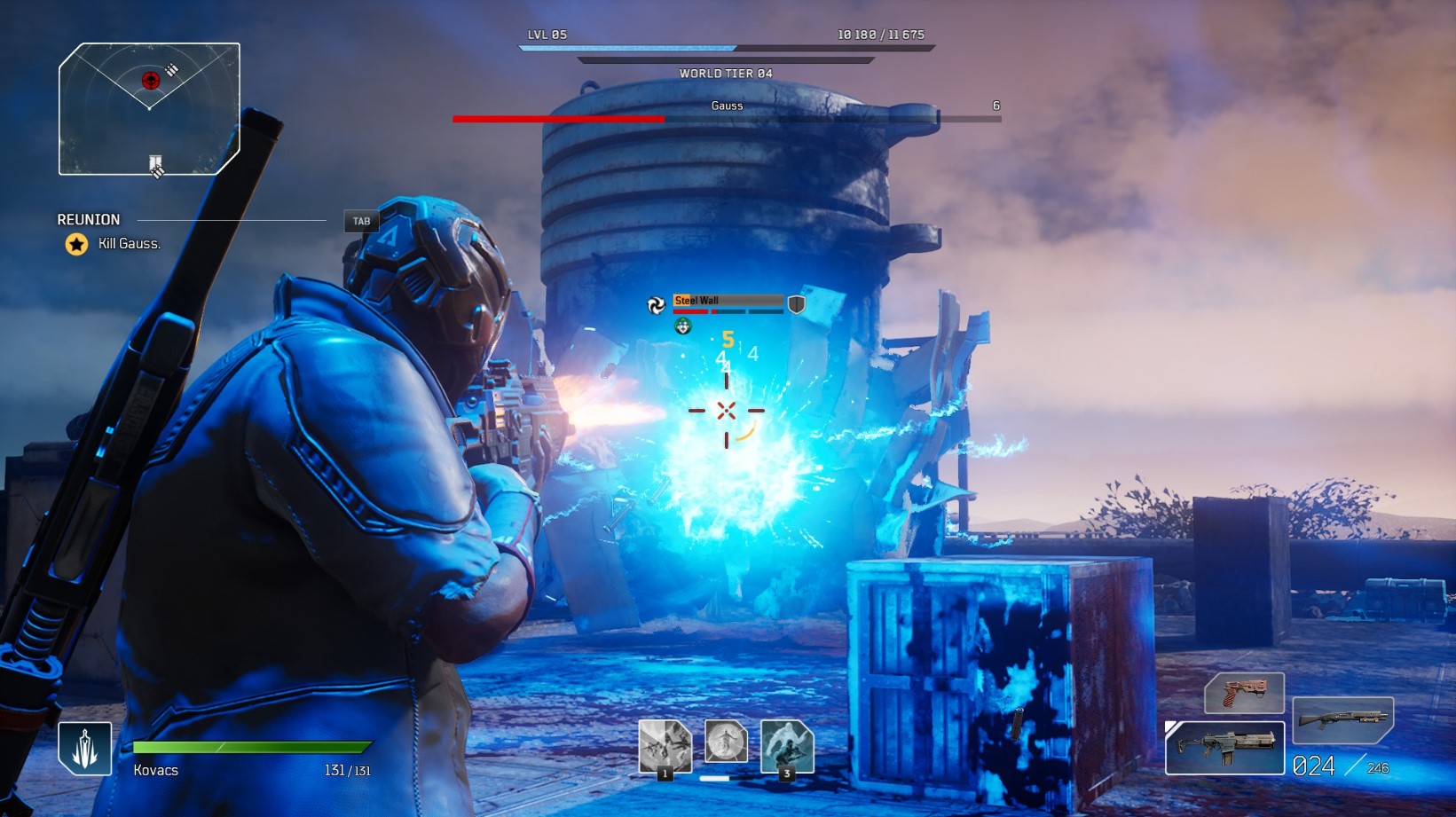 Where to find Legendary Weapons in Outriders

While there are a couple of levers you can pull to maximise your chances, looting legendary weapons in Outriders involves a whole lot of luck.

At one point in time, your best chance at loot was from farming the boxes you find hidden around the environment. But during Outriders' demo period, this was found to be too open to manipulation and developer People Can Fly massively reduced the high-tier loot chances in these regular chests.

Now, there are two main things to consider:

First off, the regular mobs you battle throughout Outriders’ levels can pretty much all drop loot.

However - as you might have guessed - more powerful enemies have a greater chance of dropping higher tier, and legendary, equipment. 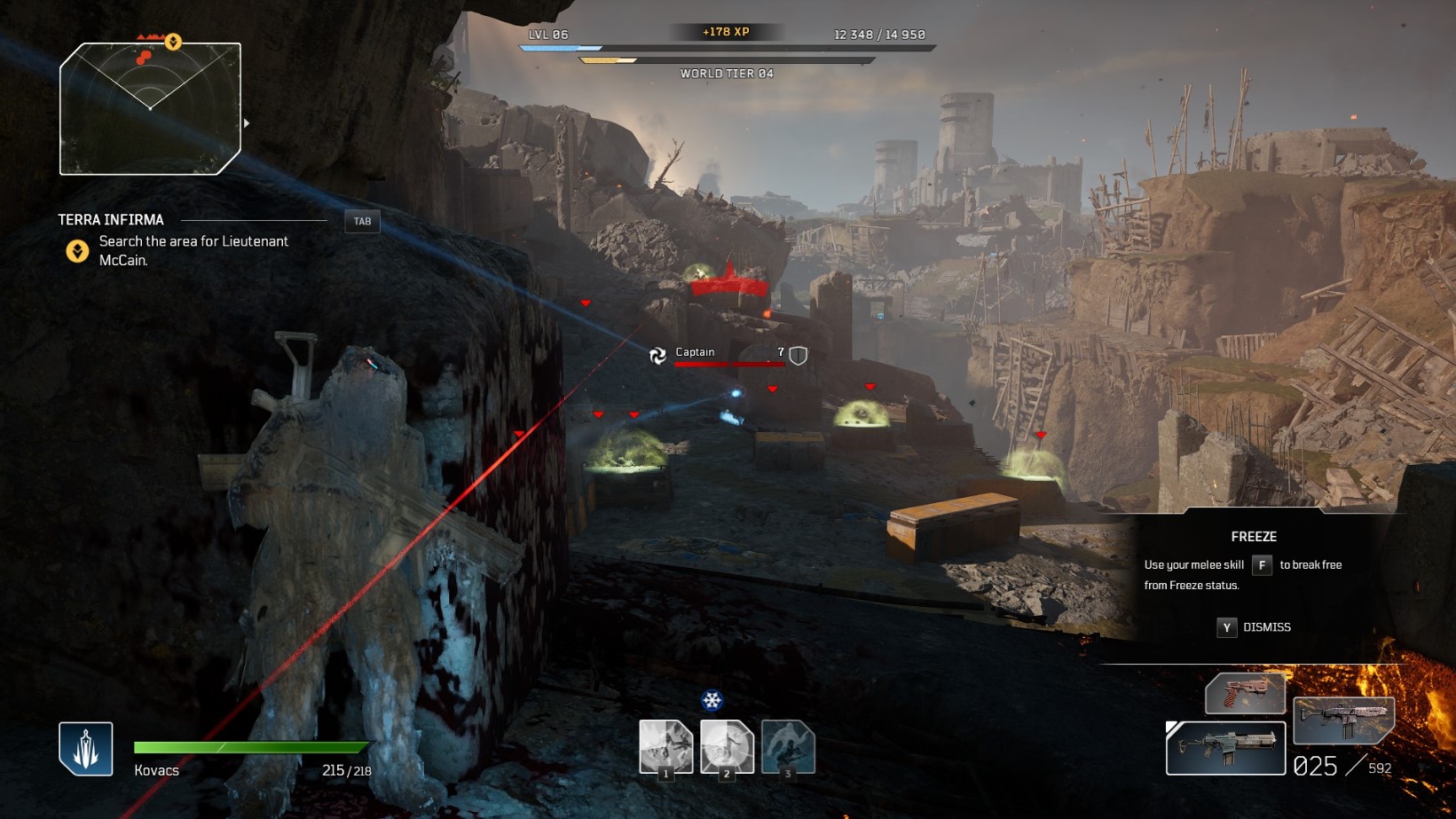 This means that you have the highest chance of scooping a top prize when you’re taking on mini-bosses and main story bosses.

In the early areas of Outriders shown in the demo and beyond, these mini-bosses appear as Captains. There’s one in the main quest, Reunion, and another appears in the side quest at the end of the demo area: Terra Infirma.

However, as you progress, you'll find that a captain spawns in nearly every side quest that becomes available to you.

Going up against this class of enemy more often will increase your chance of a legendary weapon drop.

The boss in the Payback side-mission, Reiner, is technically also a Captain, but I haven’t personally seen him drop loot.

This means to maximise your changes of finding legendary items, you should complete every optional side quest you come across.

Secondly, as you progress through Outriders, the World Tier bar at the top of the screen will fill. 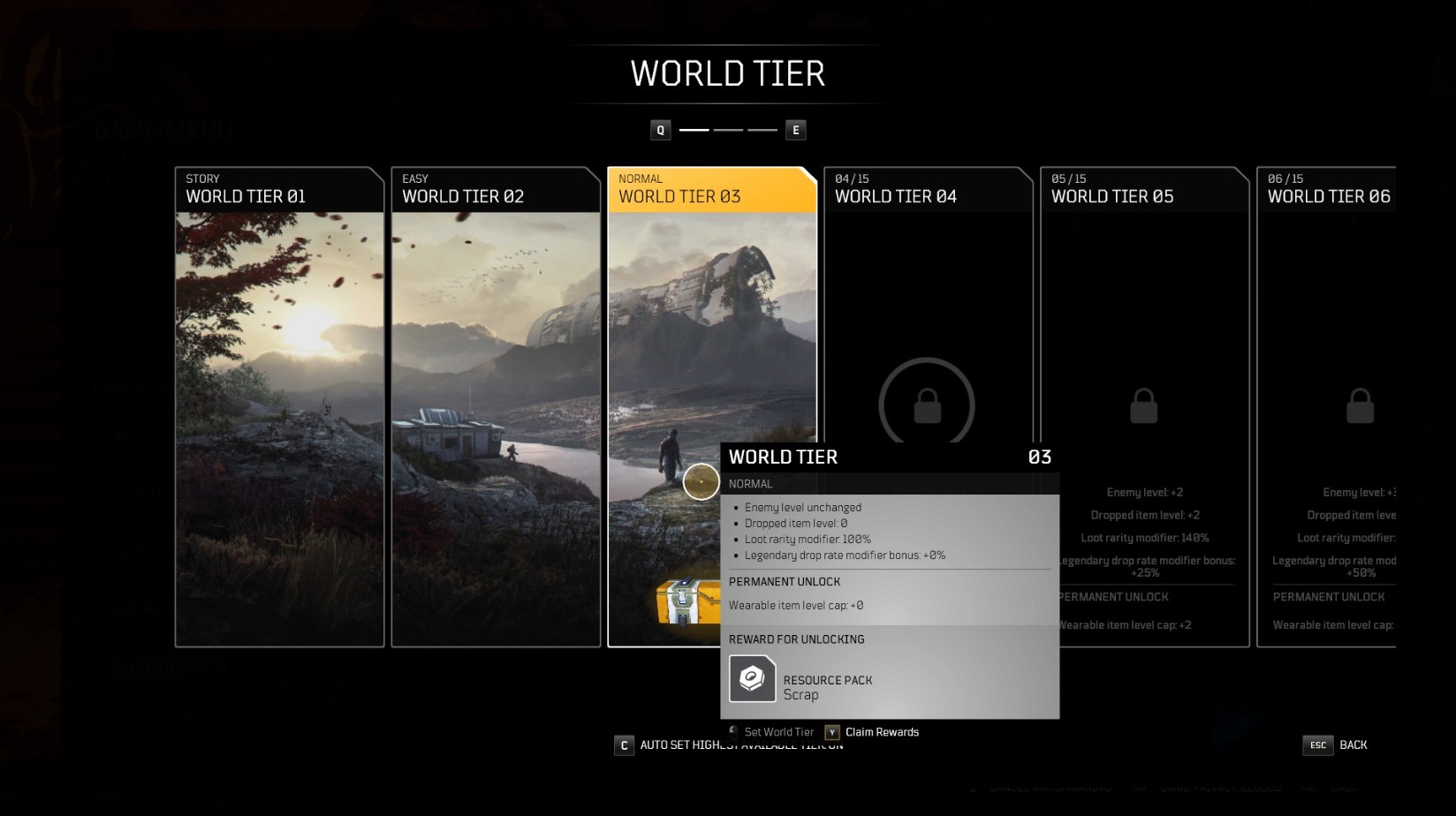 Once full, you’ll be able to progress to the next, more difficult, World Tier, which will in turn activate more play bonuses.

Grinding on World Tier 5 - the highest available in the demo - and beyond when the full game drops, will give you an increased chance of bagging the legendary you so desire as you play.

While in the early game your increasing World Tier is a smooth progression, soon enough things will start to get very, very difficult.

This is because World Tier also function as difficulty levels, and by World Tier 7 you'll be on "Master Difficulty".

Finding the right balance between a manageable difficulty and bonus drop chance is key.

How to farm Legendary Weapons in Outriders

So: you know to play on the highest World Tier you can, and you know you need to fight Captains and bosses - but how do you reliably sync those two things up?

There are a couple of ways - even in just the Outriders demo - you can do this to farm Legendary Weapons.

Terra Infirma (or any side quest) method

The slower version is to continually re-run the same side quest over and over again.

The main one from the early game area Rift Town is called Terra Infirma. This is the side-mission that unlocks when you reach the end of the Reunion main mission.

Eventually you’ll get to a point in Reunion where you’re meant to meet Jakub at the city gates, and doing so will end the demo.

If you return to Shira, she’ll offer a side-quest where you track down a missing fighter.

Accept, then fast-travel to the crossroads before heading over to the left.

Jump the gap and fight through the enemies in the next area.

Proceed, then clear out the first wave of enemies in this next area. When you’ve done this, a Captain will spawn and you can take him out for a chance at a legendary.

You can replay this quest in the demo as much as you want, so you can grind through until you get lucky.

As we said, you can do this with absolutely any side mission with a Captain enemy, like No Place Like Home in the First City, or Divine Intervention in Eagle Peaks.

Alternatively, a much quicker method is to exploit a checkpoint in the main mission’s objectives.

As detailed by DPJ in the video below, at an early stage in the Reunion mission, you’ll be asked to “carve a path to the solar tower”.

After leaving the city, you’ll fight through a group of soldiers and clear some debris to get to the Crossroads.

Continue forward, and you’ll fight through another area of enemies, eventually picking up a key to advance.

When you open the door with the key, you’ll go around a corner to the left and a Captain will roll out from behind a pillar to attack you.

Take him out as quickly as possible for your chance at legendary loot, then let the other enemies kill you.

The checkpoint will spit you out in front of the door again, and when you return around the corner, the Captain will respawn - giving you a fresh chance at glory.

Repeat this over and over and you’ll eventually get a Legendary.

If you've already played past this point, just return to the main menu, click "Select Story Point" then choose "Meet with Jakub and Shira at her command room".

Alternatively, for a more legit method, you can reset the story point to continually face off against main story bosses like Gauss and the Molten Acari.

It seems the deeper you get into Outriders' story, the greater chance there is at Legendary Drops. And fighting late-game bosses seems to be the best way to get Legendary Weapons before you reach the post-game.

To replay boss fights, go to the lobby menu and set your story point right before the big battle.

The bosses tend to be difficult, but are also some of the most fun enemies in the game - hopefully your effort is rewarded with good luck!

After you've rolled the credits on Outriders, the adventure isn't over.

Now it's time to test your mettle against the 14 super-tough Expeditions - new missions with new mechanics and more difficult scenarios.

If you're going to grind for Legendary gear, this is the place to do it. By this point in your journey you'll not only be getting the highest level stuff, but also have the highest % bonus at finding it.

As we’ve said, the Legendary Weapons in Outriders are very, very strong. So powerful in fact, that even the Legendary pistol, Torment and Agony, outclasses more conventional weapons with ease.

A few of these (like the aforementioned dual pistols) have been nerfed since the demo, but are still well worth picking up. 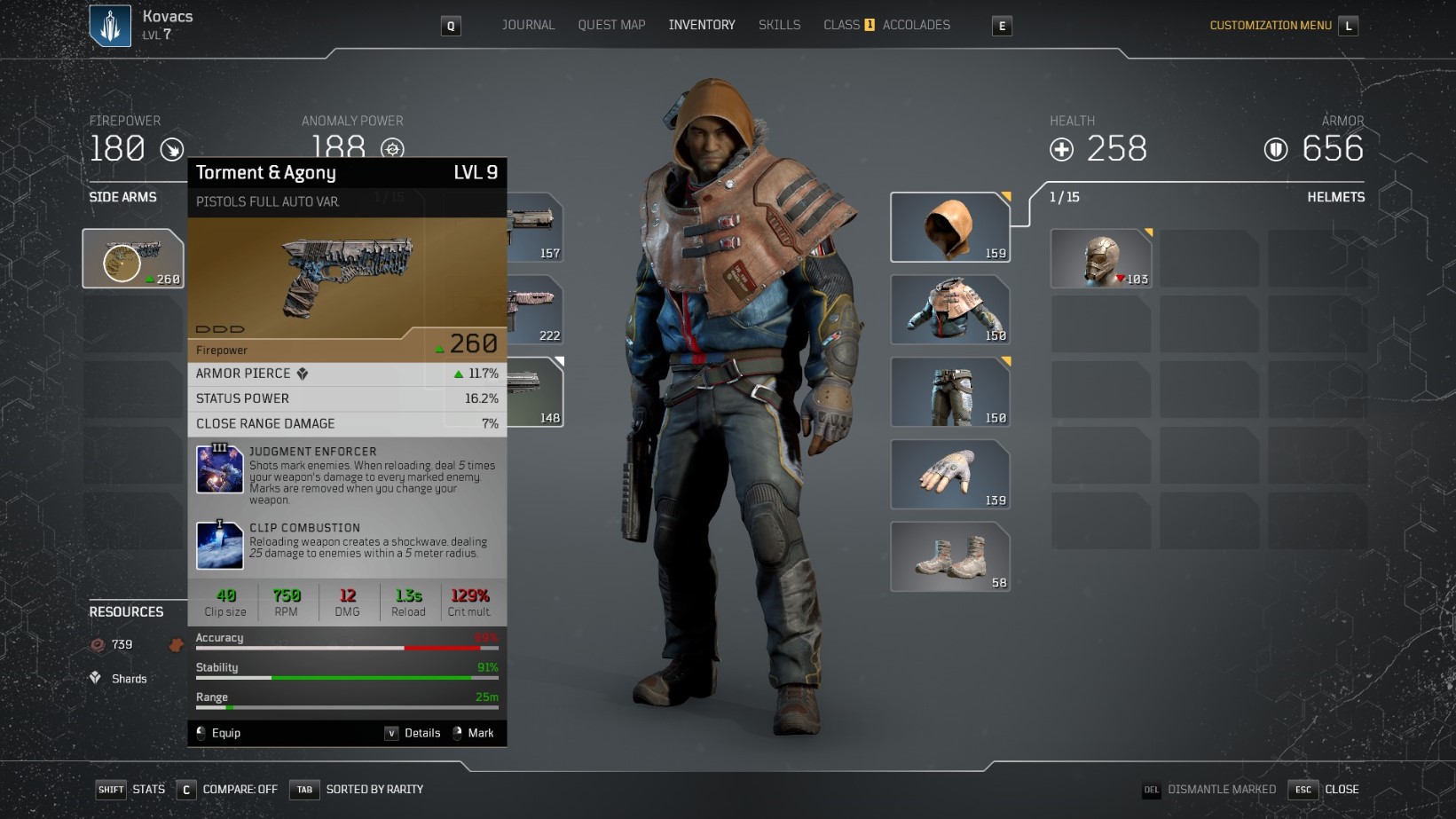 Below are all of the Legendary Weapons we know will feature in Outriders. Some we've spotted in the demo, but most have been revealed by the development team, People Can Fly, on Twitter.