Media Molecule’s Dreams started off as this seemingly unknowable, abstract thing. Only with the launch of the closed beta did it reveal its true nature as a powerful, accessible game engine. Now it's properly out and the beta is well and truly over, the truth is clear: Dreams is LittleBigPlanet on growth hormone.

Where Media Molecule’s cutesy platformer was restricted by its visual style, Dreams seemingly offers endless possibilities, allowing people to make games and movies in any genre with its tools, using both realistic and stylised visual designs. Ever since the embargo lifted on the closed beta, we’ve been impressed by the quality of stuff being made with its tools. Now it's fully out and people are playing and making some amazing things. Here are some of the best:

Not many developers make pure flight sim-style games anymore. Luckily, one Dreams creator has taken it upon themselves to make the Star Wars X-Wing game of your Dreams (and by that I mean "in Dreams", thanks).

Someone has remade a remake, collapsing time and space around us. We are all floating now. Floating in the void. Anyway, check out the footage of Final Fantasy 7 Remake remade in Dreams above.

Can you call it a remake when the game isn't out yet? Probably not. Luckily, this one is a demake. If you ever wondered what Cyberpunk 2077 would look like as a PS1 game, Bearly Regal has you covered.

Another demake from Bearly Regal, this one imagines The Last of Us Part 2 as a Silent Hill-esque PS1 horror. It's fully playable and really well made. I love the way Ellie puts out her hand near walls, just like in Naughty Dog's triple-A sequel.

Are you sick of Stardew Valley being so flat and full of gameplay mechanics? You're in luck. Created in Dreams by cTooshi, this experience lets you wander around Stardew Valley's Pelican Town in 3D.

Here someone has created the opening area of Fallout 4 within Dreams and you can roam around it pretending you're playing the Bethesda game, even though you could just buy the Bethesda game. Check out the link for Fallout 4 in Dreams to try it yourself.

Someone made Red Dead Online in Dreams from r/RedDeadOnline

Someone was bound to do it and someone has. Here's a little game made in Dreams that jokes about connection issues within Rockstar's multiplayer cowboy game, Red Dead Online. 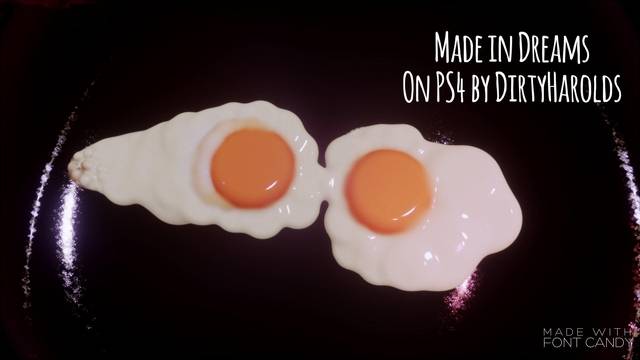 Not only is Dreams a gateway drug to game design, it’s also a place where 3D sculpture artists will be born. Take this picture of some perfectly fried and rendered eggs, created by closed beta participant DirtyHarolds - it’s just one example of how the tools can be used to add impressive, granular details to your creations. No doubt there will be people who just pump out assets like this to upload, ready to be used by the rest of the community.

This one is only a proof of concept and doesn’t show any gameplay, but it shows the incredible level of detail someone can put into a first-person setting with a realistic style in Dreams. In it, a hitman walks down a rainy American street as water pools by the edge of the road. You can hear a dog barking in a nearby garden, light reflects off his pistol, and the wind rustles through the trees. It apparently took a week to create, and I can’t wait to see what someone can do with months.

#DreamsPS4 A direct twitter upload of the Dead Space scene. I've decided to stop working on it. pic.twitter.com/dyk70zCMN4

I wouldn't be surprised if Sony started taking copies like this down, but this short clip shows how versatile the Dreams tools are, allowing someone to recreate the opening scene from Dead Space. It also hints at the potential Dreams offers for original horror games created within it. Maybe don’t make the enemies a banana, though. There's another scene from Dead Space in Dreams at that link there.

In another awesome instance of copyright infringement, someone recreated Konami’s playable teaser for Silent Hills, PT. All the assets are present and correct, it just looks like it took a slight graphical hit. With collaborations within Dreams, no doubt multiple creators could come together to add the finishing touches to this impressive creation. But like I said before, I’m more excited at the prospect of some original horror created with the tools.

It’s not all realistic-looking first-person games, of course. Divide shows that Dreams is also capable of creating arcade hits. In this, you collect items and avoid obstacles as a line that can divide with the touch of a button. It features high score tables and even has an achievements system.

This one gives us a glimpse of what a more stylised aesthetic looks like in Dreams. It’s a proof of concept for a Lovecraftian horror, basked in a red filter and with unknowable tendrils snaking across the sky.

This one’s a charming platformer that asks players to speedrun through its levels. It shows off some of the physics Dreams is capable of, as well as the fact creators can implement power-ups such as speed boosts. It looks a lot of fun.

Media Molecule did a stream recently that showcases some of the coolest creations made in Dreams so far. If this doesn’t sell you on the game, I don’t know what will. There’s fighting games, 3D adventures, first-person exploration games, platformers, mech combat games, sculpts, animation rigs, and loads more. Honestly, just watch it. Watch it all.

As a little bonus, someone has also created their own performance capture kit within Dreams, allowing them to act out scenes as characters.

Dreams is out now, exclusive on PlayStation 4. You can check out our hands-on with Dreams here.

Here is a relevant rap track: