This is what it's all been building to. 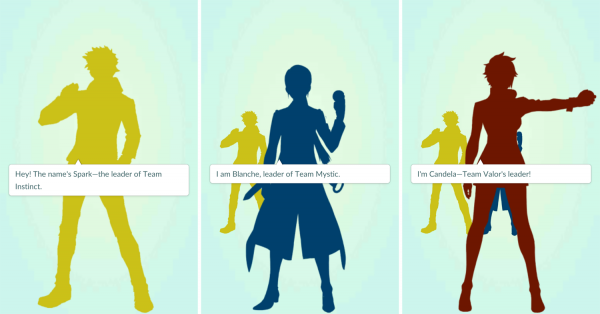 The quest for any would-be Pokemon Master comes to a head with one major point: hitting a gym. When your time comes, what should you do and what's in it for you? We explain.

In order to get into the gym-toppling and training game you'll have to hit at least level 5 - when you do, you'll be able to get stuck in to this, the first (and currently only) combat-driven part of the game. Find the nearest gym on the map and head over. Gyms will be obvious on the map - they're tower-like structures with Pokemon atop them. They'll be coloured red, blue or yellow for a team or grey if they're unclaimed.

When you first arrive at a gym at level 5 or above you'll first be prompted to join one of the three Pokemon Go teams. It's not possible to change teams at the moment, so coordinate with whoever you need to before making your decision. If you want to read a little more about the teams and your leaders, we've got you covered. Once you've made your pick, you can train at friendly gyms, or try to seize control of gyms controlled by other teams.

If the gym is neutral when you arrive, you can install yourself as gym leader.

Gym levels are related to their prestige. Gym prestige is built by friendly trainers battling their Pokemon at the gym to train, while prestige is chipped away by rival teams coming to the gym and defeating the Pokemon installed there. The higher a gym's prestige level the more trainers can be allocated to the gym in order to defend it.

If the level is higher than the number of players stationed there (level three gym with two trainers etc) you can just slot yourself in amidst their ranks, with your position determined by your Pokemon's CP in comparison to your teammates'. Each gym can house up to 10 Pokemon - when it has 10, it's maximum level and will be a huge challenge for a rival team to topple.

Challengers will work their way through the gym's team and if they win, the gym will lose prestige. If your gym's prestige hits zero, a trainer from another team can claim it.

The best way to earn XP at neutral gyms is to have your weakest Pokemon stay at the gym, and train against it with a much stronger team. Even if you're not looking to level up quickly, it's not a great idea to have your strongest positioned at a gym as you won't get it back until the team is defeated.

Every day that you have a Pokemon defending a gym, you'll receive a Defender Bonus that lets you pick up free Stardust and Pokecoins from the shop. Just head to the shop and then tap on the shield in the top right corner in order to nab your reward. These rewards stack per gym, so it's in your interest to be present in as many gyms as possible. You can claim your reward once every 20 hours providing your Pokemon hasn't been turfed out of the gym. 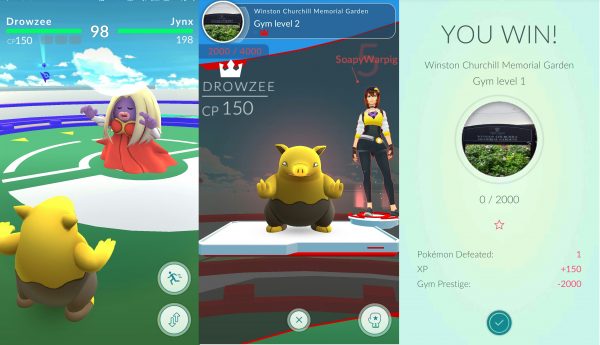 It should go without saying that before you rush over to a gym, you should do a little recon on what you're up against. You can check out the trainers at nearby gyms without having physically be in the vicinity. Just tap the icon on the map to have a snoop and then put together your team accordingly.

You can fight with up to six Pokemon and need to defeat all of the trainers defending the gym.

To use the basic attack, just tap your Pokemon. Performing basic attacks will also charge the special meter.

When it's ready, you can deploy a special attack by pressing and holding on your Pokemon to unleash a more devastating attack.

But don't just mash wildly at the screen. You'll need to evade incoming attacks as well. Swipe left or right to dodge.

At the moment you can only battle opposing teams at Pokemon gyms.