Marvel Ultimate Alliance 3 isn't interested in being subtle, or like the movies. It just wants to be dumb comic book fun - and that's brilliant.

The world of Marvel Comics is without a doubt one of the hottest entertainment properties around, and in gaming we've currently got two very different styles of game vying for our attention: Square Enix's lavishly-produced, MCU-alike Avengers title, and Nintendo's Marvel Ultimate Alliance 3, a game that absolutely relishes in being more like a Saturday-morning cartoon version of the heroes than those you might know from the movies.

These two games actually occupy very different spaces in a multitude of ways. Square Enix's Avengers title is clearly lavishly expensive and, from the brief glimpse we've seen so far, fairly well-polished. But it's fairly drab movie-inspired designs have left a lot of fans cold while the game's structure is still something of an unknown. Based on a first half-hour with Marvel Ultimate Alliance 3, Nintendo's title is almost precisely the opposite, in some ways feeling a little cheap and rough around the edges, but it's also a sort of brainless fun that anybody can jump into and fall in love with, complete with a colorful artistic flair to match.

The hands-on video embedded above sort of speaks for itself - Marvel Ultimate Alliance 3 is charming and damn good fun, but it also comes with its share of jank, primarily present in the demo I played in the form of a deeply uncooperative camera. The camera is fighting with both the environment and the players: in four-player cooperative play as demoed, the camera stretches back and forth, zooming in and out, trying desperately to keep everybody in shot. It often isn't very successful at that as players stretch the rubber band that is the viewable play area to breaking point in search of new goons to smash.

As the camera strains to counteract that, it gets tangled up on towering background elements of the environment. It's not ideal, and at best is annoying - but at worst the constant camera movement can be a little nauseating. There's none of the elegant co-op camera work of Traveler's Tales' Lego games here. To be fair, the camera is apparently strictly a local multiplayer issue - for solo play or online co-op you get a more dedicated solo camera, eliminating one of the major reasons it appears so broken in the first place.

At the same time, however, one suspects this sort of design is almost intentional, even when it's a bit broken. Marvel Ultimate Alliance 3 isn't about subtlety. It's about so many attack effects flashing and popping off on the screen that you can barely keep track of what you're doing. It's about multiple character team-up super moves that do 150,000 damage and almost tank the frame rate in the process.

It's the video game equivalent of Mjölnir crashing down on your skull to finally give you sweet release. So indoctrinated are you by the flashing lights and the big numbers that you sort of forget the bits that are slightly naff. 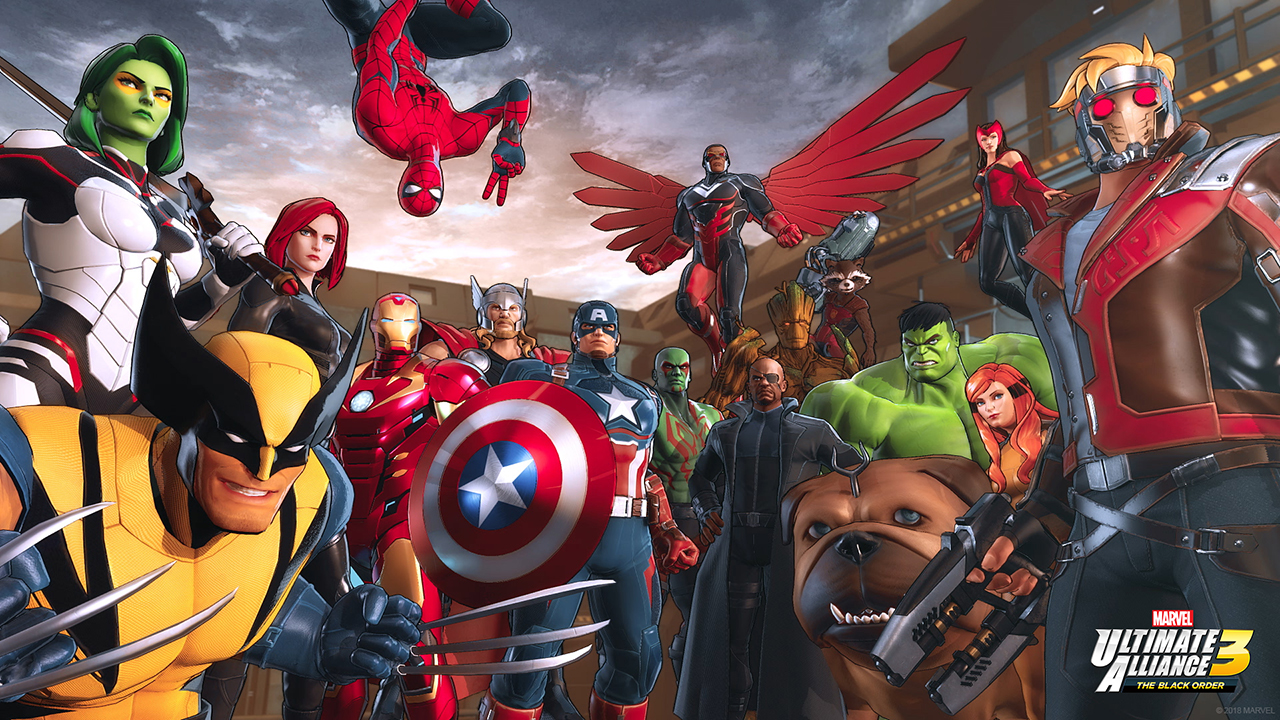 So you learn to take the rough with the smooth. The dodgy camera, the sometimes-iffy frame rate - you grin and bear them because there's plenty else to love. Like a character roster worth a damn, some charmingly cheesy comic book accurate dialogue and what looks to be a half-decent RPG progression system, with each character hiding surprising depth and a range of loot items to be found, equipped and experimented with.

There's even specific team bonuses for bringing characters with natural affinities together - so it appears there'll be a surprising amount of depth hidden away, and that depth is already set to grow over the months post-release with new character additions. Marvel Ultimate Alliance 3 might not be the most polished Marvel game that's releasing in the near future - but it seems a safe bet it'll be the most immediately fun.