Doom Eternal finally comes to consoles and PC later this March, so let's take a look at everything you need to know about slaying demons.

After a short delay, fans will be able to get their hands on Doom Eternal in the first half of 2020. The sequel to Doom promises to be just as fast-paced and violent as its predecessor and comes complete with a new soundtrack that's more metal than your maw's kettle.

You can check out our Doom Eternal preview here, or we can cut straight to the chase and take a look at everything we know about it.

Doom Eternal launches for PC, PS4 and Xbox One on March 20 - the same day as Animal Crossing: New Horizons, which is quite the juxtaposition. A Nintendo Switch port will also become available later in the year.

Players will receive Doom 64 as a pre-order bonus for Doom Eternal if you're looking for a quick nostalgia hit. Alongside a standard copy and its steelbook counterpart, there's also the Doom Eternal Collectors Edition and the Deluxe Edition.

The Deluxe Edition comes with:

The Collectors Edition comes with the same Deluxe Edition content plus:

Both of these copies come with the Rip and Tear pack which includes:

Much like it's predecessors, you'll be ripping and tearing enemies apart and coming up against more challenging enemies like the Doom Hunter, so your Slayer better be ready. Doom Eternal also comes with a new hub space if you fancy just chilling the fuck out and blinking for a moment after a particularly difficult level.

There are five confirmed locations you'll be visiting in Doom Eternal, which are Phobos, Mars, Earth, Heaven, and Hell. Heaven is set to be the most drastically different environment in the series, but don't expect it to be all peace and tranquillity - this is a Doom game, after all. You'll also be able to see cutscenes in the third-person, adding more dimension to the Doomslayer. You'll also have the chance to uncover more lore about the Doom Marine as you progress, though you'll need to do some digging.

Pickups will also be floating in a bid to make things more straightforward for players, especially since you'll be sprinting and climbing at a furious rate. Alongside checkpoints, you'll also be able to pick up extra lives that will keep you in the fight longer. The UI feels bigger and bolder in Doom Eternal which actually makes things easier for players as one glance at the power wheel lets you keep track of your resources and hopefully avoid untimely death. 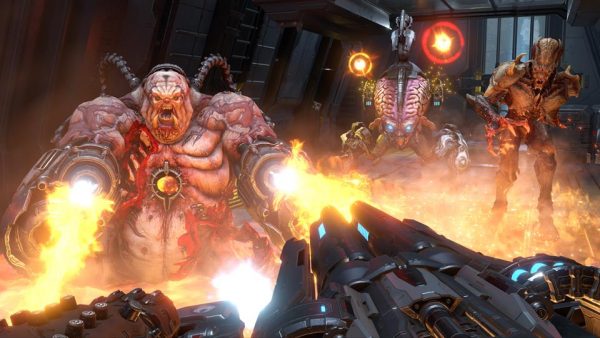 Deathmatch won't be available in Doom Eternal but worry not, as there are two other multiplayer modes to sink your teeth into. Battlemode is the 2v1 multiplayer mode where two player-controlled demons are pit against a single player-controlled Slayer, which should prove interesting. It'll likely be an endgame activity for veteran players that'll weed out the noobs from the pros.

There will also be a new invasion mechanic, where demons will be able to choose from a large pool of enemy types that will be let loose in another player’s game. Not all levels can be invaded, but it'll certainly ramp up the challenge for master-level players who want to play as demon or Slayer.