I recently wrote an article about how Doom 2016’s lore enhanced the experience. Doomslayer has been transformed from a generic grunt to a mythical figure, but he’d still rather talk with his hands.

In the Doom Eternal reveal trailer, we see him walk through a control room full of terrified humans, each of them visibly recoiling at his presence. This is where my hands-on demo begins: with him ripping the card from a scientist’s neck, scanning it, and stealing a gun from a nervous security guard. 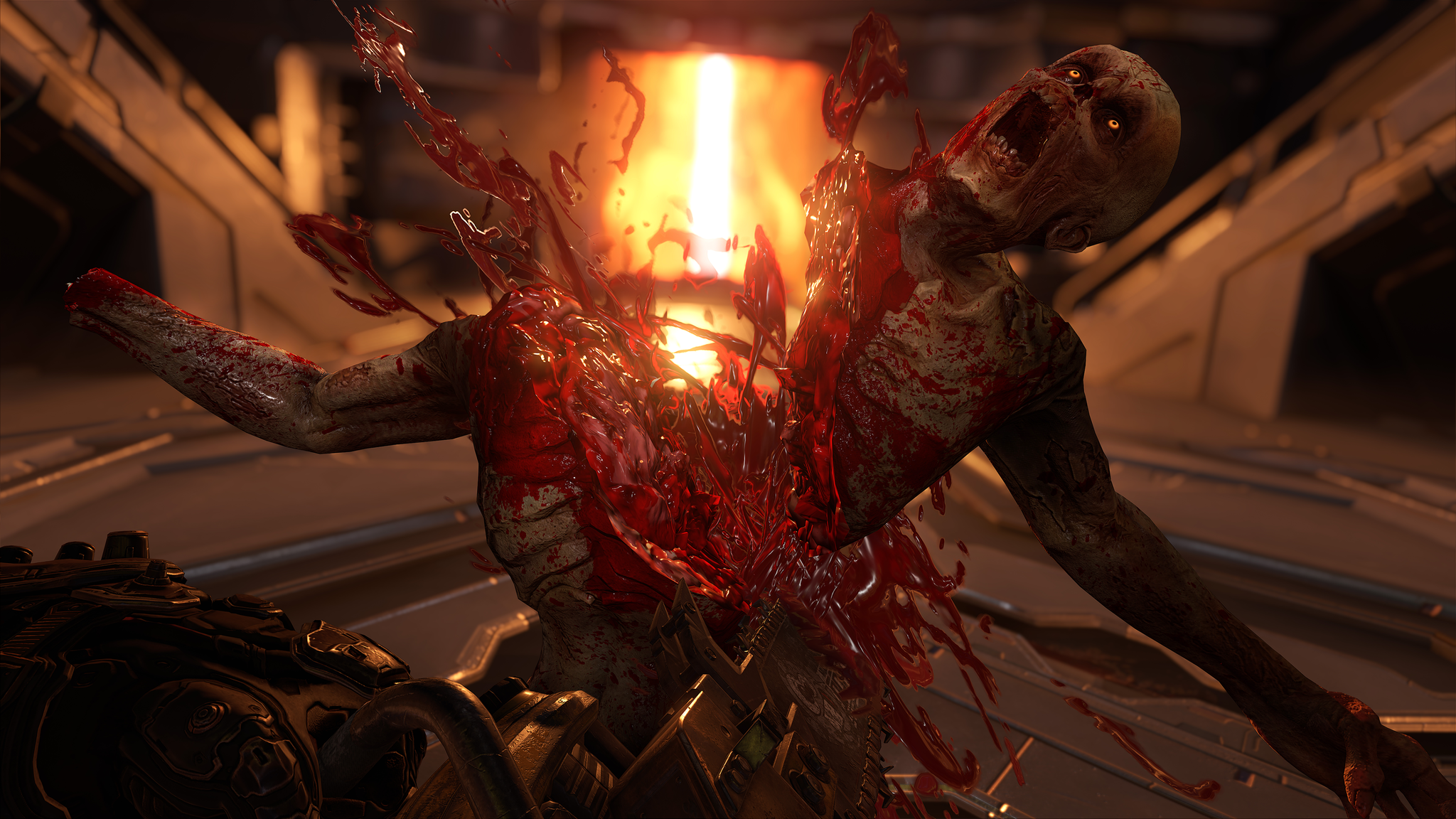 After this, we’re straight into combat across Phobos, battling the hordes of hell with a range of over-the-top weaponry. The little character flourishes won’t get in the way of this - Doom Eternal is as single-minded as ever. Id Software is just aiming for a unifying experience in both cutscenes - some of which now briefly play from third-person - and combat.

You see, combat is exactly like that control room scene: Doomslayer takes what he wants. If you need armour, you use the new shoulder-mounted flamethrower to set an enemy alight. If you need health, you damage an enemy until they’re opened up for a Glory Kill - an instant melee finisher that punches heads through necks, or uses wrist-mounted blades to sever limbs. If you need ammo, you pull out your chainsaw. Rip and tear, take what you want, ever forward.

It’s basically Doom 2016 cranked up to 11. Every gun feels more impactful because of a new gore system that sees chunks of meat fly from enemies with every shot, drilling through layers of degradation. You can also destroy enemy weapons to reduce their capabilities, making each shot more of a tactical consideration. Then there are the guns themselves, which have also had an overhaul: the plasma rifle in particular feels incredible, turning enemies into goo as they fill with an electrical charge.

You’re forced to cycle through your arsenal to cope with different enemy configurations, and arenas are much more varied this time as well - not just in terms of layout, but also in how some are peppered with portals and launch pads, allowing you to circle around and keep the enemy guessing. Stopping equals death. Then there’s the meat hook - a new attachment for the super shotgun - that allows you to pull yourself towards enemies like the flying cacodemons, adding more verticality to each encounter. Just make sure you’re not reloading first, eh?

Because there are more tactical options, a greater variety of enemies, and more complex arenas, Doom Eternal feels like you’re constantly clenching your asscheeks. The pressure never lets up and it feels much more difficult, moment-to-moment, than its predecessor. However, this difficulty is offset by a new extra lives system which can save you when overwhelmed. 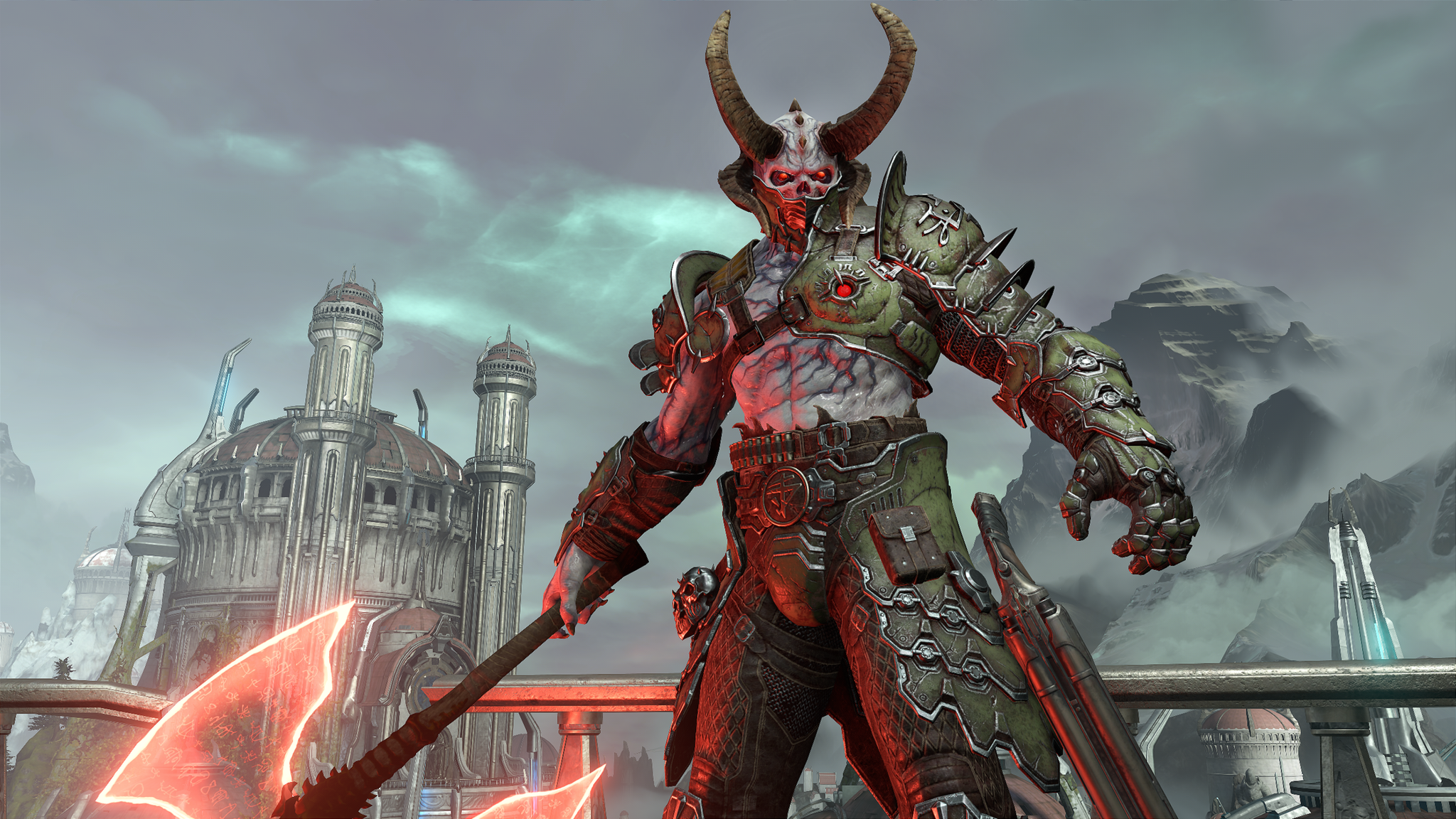 You also don’t die from falling into the abyss, which is handy since you have that meat hook, you can swing from pipes, and you can climb certain surfaces, so you’re not always planted. The latter feels like a bit of a strange addition, in all honesty, taking away from the pace of the thing. I understand that id doesn’t want the game to be entirely one-note, but it feels like that’s what the excellent cutscenes are for: a moment to breathe. In one such breather, Doomslayer kicks a man-sized shell from the barrel of a 200-foot cannon, climbs in, and fires himself into a demon-filled base. It might be the most badass thing to ever happen in anything.

If Doom Eternal can be summed up in one new mechanic, it’s the dash - previously seen in Doom VR and Rage 2. It’s a tool that initially seems to be useful for getting out of trouble - and indeed it’s handy to backpedal and fire in a pinch - but is actually often best deployed to get in close and super shotgun a demon’s face off. Doom has always been about constantly pressing the fight, and Doom Eternal feels like a confident stride forwards.