Pokemon Unite is a barnstormer right out of the gate.

The world of Pokemon has been applied to many genres of video game, but I think it’s pretty fair to say that only a handful of them have been runaway successes. There’s the original turn-based RPGs, of course. There’s the photography simulation of Snap, and the augmented reality adventures of Pokemon Go.

These aren’t just successes, but in most cases are also milestone titles - but for every game like this, there’s something that’s just sorta fine - puzzlers, fighting, and a slew of mobile money-spinners. To be quite honest, I'd thought Unite would be like these - a good idea that'd result in a fine if slightly tepid spin-off. Not quite a Pokemon game and not quite a MOBA, just a little bland combination of the two.

But y’know what? Pokemon Unite just might be another one of this series’ staple moments. It just might be the most important Pokemon game since Go. 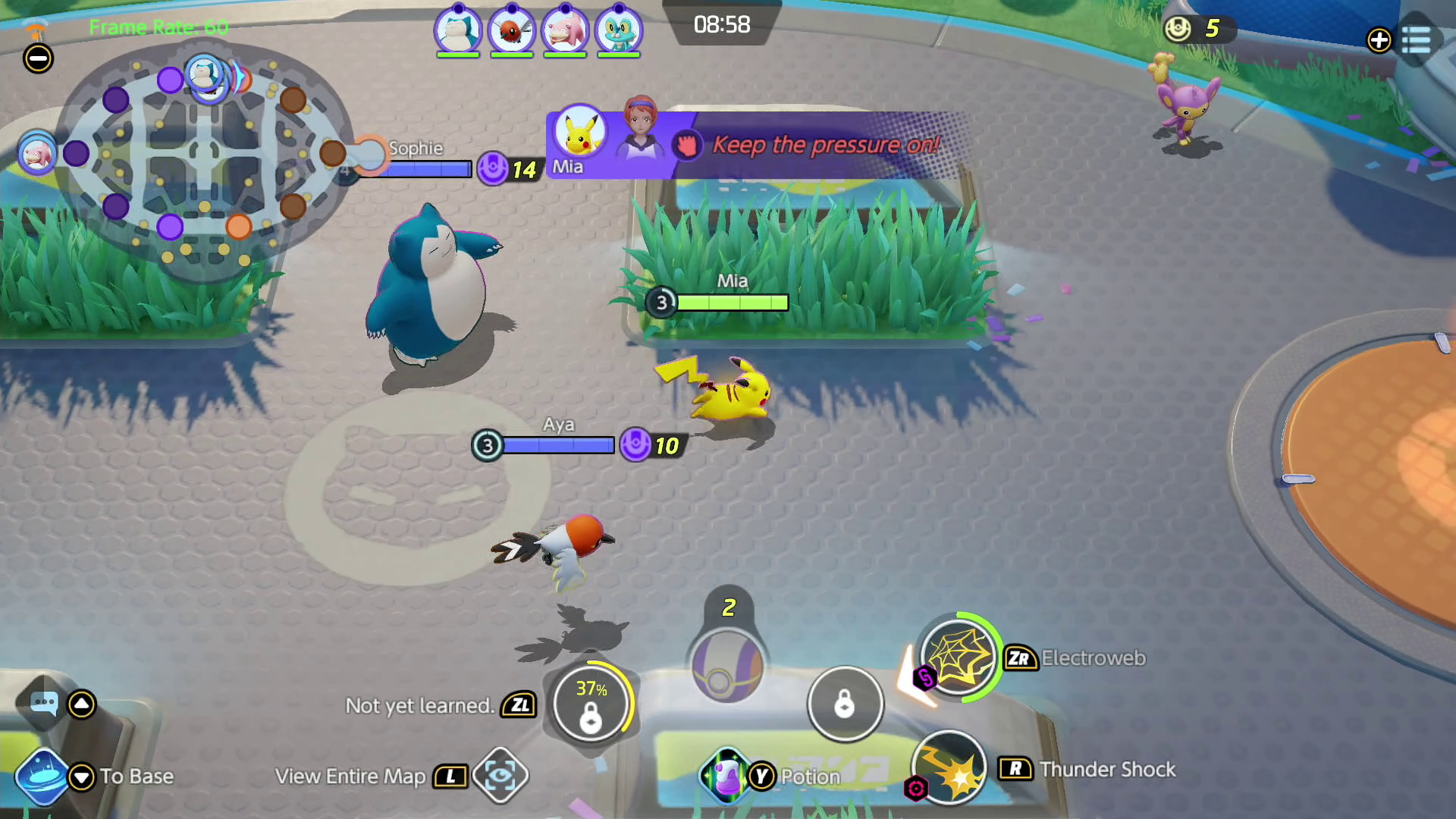 The idea for Unite is hardly the greatest jolt of lightning bolt genius. In fact, it’s obvious: games like League of Legends and DOTA 2 are absolutely huge, so why not adapt them with some of the most beloved characters in gaming? These sorts of games require a varied cast of characters with wildly different and interesting abilities - and Pokemon has those in abundance. It just makes sense.

This isn’t a guarantee for success, though. The MOBA genre is complicated and often confusing and difficult for newcomers to follow. A franchise like Pokemon is sure to bring many newcomers, as well as younger or more casual players - and this game needs to be playable comfortably on touchscreen devices. Unite gets a flying colors pass on all of these fronts.

The smart design carries through to the ways in which it doesn’t follow the traditional structure of the genre. One thematic difference is rather than being focused on destroying the opponent’s base, you’re instead scoring points. An overflow of points can remove certain base elements, which means the overall effect is the same - but the absolute numbers you’ll need to dump into the goal to move forward are inherently easier to understand. This fits the framing of the game in the Pokemon universe, where Unite is some far-off region’s beloved sporting event. Also fitting to this is one of the best changes - a hard ten-minute time limit which means matches can’t meander on or descend into a stonewalled stalemate. In fact, matches are frenetic and fierce, often ending well before the timer expires.

In some ways, it’s hard to believe what a good fit Pokemon feels for this genre. Of course the various non-player creatures you can encounter and battle out on the map to gain an advantage are simply wild Pokemon, and of course as the match wears on more powerful variants appear. That just tracks. The power creep as your character levels up and grows more powerful over the course of a match feels completely natural to the franchise, and the thrill of seeing a Pokemon evolve to their next form right in the heat of battle is just… look, it’s good, alright?

All of this is about the broad feeling of the game, but it also feels pretty good to play, too. I’m the sort of person who has always been able to appreciate the challenge and fun in the delicate ballet of chaos that is MOBA action - to an extent it appeals to my RTS-loving nature - but at the same time, I’ve always struggled with actually getting into and enjoying the genre as a player. Not so with Unite; it’s streamlined well, nipped and tucked in all of the right places to make it eminently accessible.

Co-developer TiMi knows what it’s doing, and has a solid track record of creating huge mobile games. That makes that Unite does feature some pretty aggressive monetization - probably the one dark cloud hanging over the game. None of it is pay-to-win stuff - it’s mostly cosmetic, and with plenty of chances to earn enough currency to buy things for free - but it’s still constantly eagerly dangling shinies in front of you, keen to get you to open your wallet.

There’s a sinister sort of undertone to some of this, like how you can unlock costumes for Pokemon you don’t even own, thus goading you to spend money to unlock that Pokemon in order to use the costume. You just know there’s psychologists working on this, figuring out the best ways to ‘encourage’ - that is manipulate - users into spending more. That makes me uneasy, just as it does in some of the ridiculous monetization Niantic has deployed in Pokemon Go. That’s less ideal. But the core game is at least free, and will soon also be on mobile with cross-platform progression.

...and yet, the game is good. There’s a lot about it to love. And this is exactly what happened to me with Pokemon Go and Genshin Impact, two other well-designed free-to-play games with cheeky but not quite over the line monetization. Could it be that Pokemon has actually done it again? I dare say The Pokemon Company has got another mobile revenue chart-topper on its hands. Maybe the obvious ideas sometimes are the best, after all.