After being teased and shown at trade shows, Nividia's RTX ray tracing is coming to Minecraft on PC in a beta form later today - and it looks stunning.

We got a chance to check out the beta build that's releasing today ahead of time, and it's particularly impressive as a showcase of the ray tracing technology that Nvidia has been pushing since the release of its RTX series GeForce graphics cards.

Minecraft makes a lot of sense as a ray tracing showcase - as well as the best-selling game in the world, it's also a deceptively simple game which can have a large degree of complexity layered on top of it - perfect for showcasing new technology such as ray tracing.

One quality ray tracing has is in Nvidia's Minecraft implementation is that it begins to give everything that hyper-real quality that was previously only the realm of pre-rendered CG and flashy, non-playable GPU demos. It perfectly fits this game - you could imagine Buzz and Woody cutting about these ray traced environments. While that look isn't ideal for every game, it's a very useful demonstration and benchmark. The simplicity of Minecraft essentially makes it the perfect ray tracing demo.

For an example, here's two screenshots of Minecraft with RTX - the first with ray tracing turned off, and the second with it turned on: 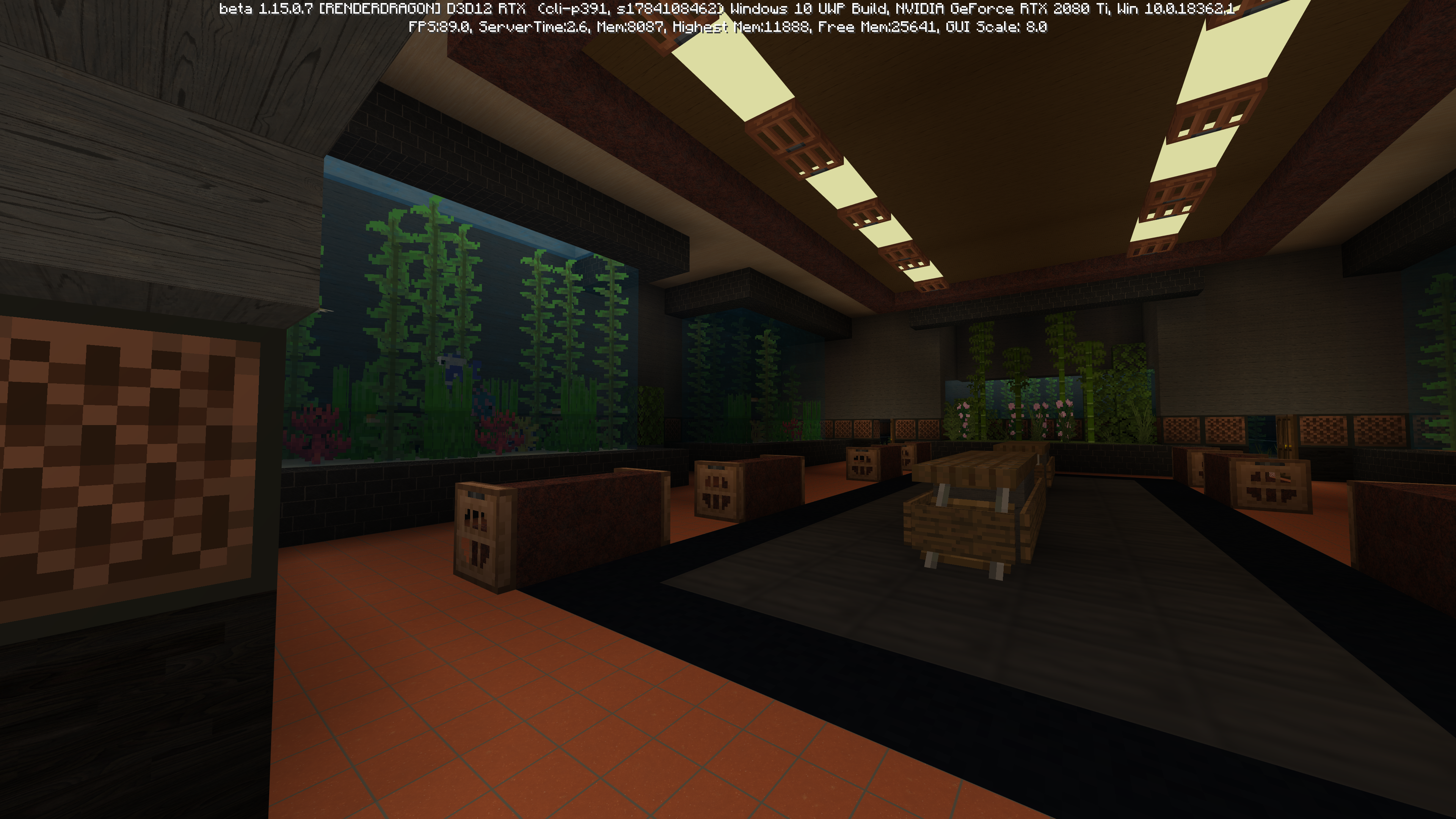 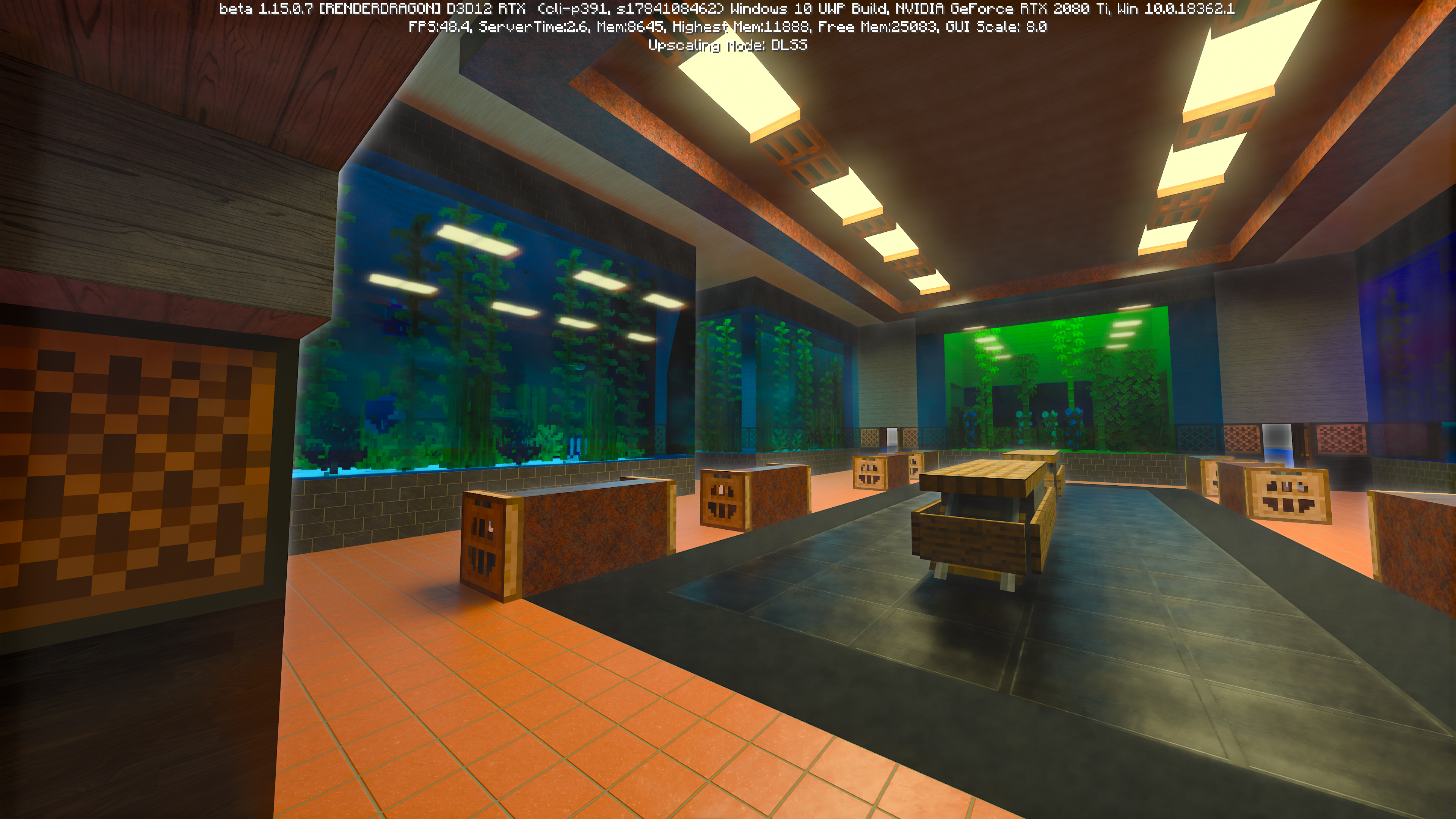 As you can see, that's quite the difference. This build basically brings a few different features to Minecraft, all of which work in tandem using the dedicated ray tracing cores in Nvidia's RTX hardware to deliver a completely different visual look.

For a start there's ray traced lighting, which we've talked about lots on the site before. Ray tracing basically follows the path of beams of light to trace their movement, allowing for far more realistic and true-to-life lighting, reflection and shadows. In Minecraft with RTX this goes deep: light actually shines through colored glass and changes color as it passes through it, making stained glass windows with realistic effects possible. Lava doesn't now just light a room - it bathes it in a deadly-feeling orange flow, meaning caves take on a whole new appearance and feeling. Meanwhile, physically based rendering gives surfaces a realistic touch - so a polished marble floor will reflect light, while coarse surfaces will not.

Given Minecraft has a built-in and integral day-night cycle, one of the most impressive uses of ray tracing in this build is its use of shadow. This is ray tracing at its best. A lot of these demos are in your face, but the shadows are a subtle change that you don't initially notice until you see sunbeams streaking through gaps in trees or open doors, or imposing shadows cast by huge buildings. A favorite trick of the builders behind the demo worlds is to create huge skylights that at certain times of day completely fill a room with light.

By far my favorite, however, is the use of mirrors. This is just a matter of the ray tracing technology in action in a very specific way. One room of the demos Nvidia has prepared features a fully-fledged mirrored room that with ray tracing off just looks like a tiny box room - but when ray tracing is on and one particular block becomes a mirror, the room seems to extend for miles. Take a look: 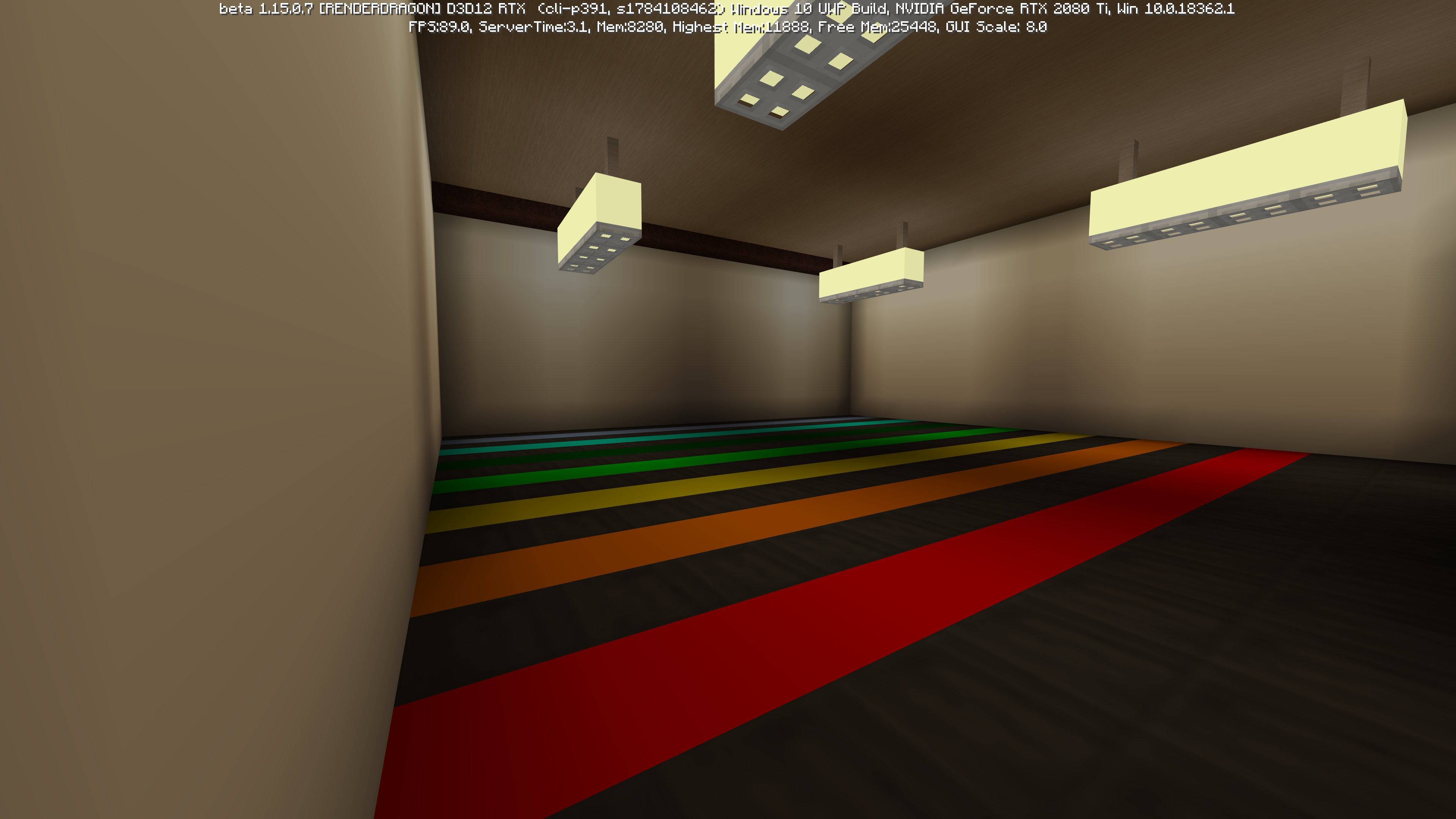 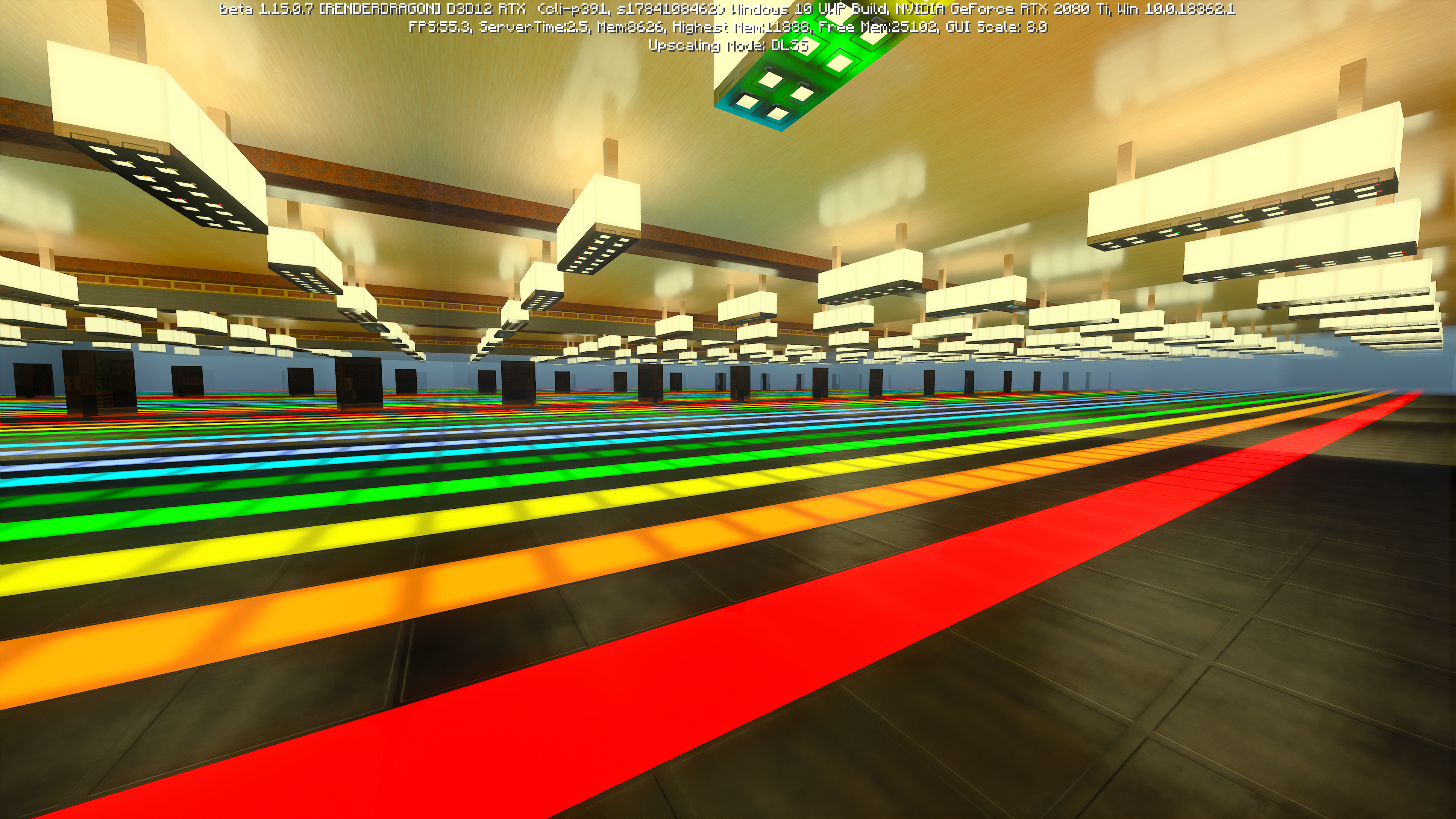 I'm sure you can agree that on paper the difference is stark enough to be happily called bananas. Ray tracing has been a staple of movie visual effects for years, but something like this mirrored room allows you to quickly imagine implications unique to video games. Imagine a boss encounter in a similar room where you have to work out which never-ending horizon is real and which is simply a reflection. Imagine a hall of mirrors showdown where every twitch movement could be a real threat or simply yourself. These are exciting prospects, perfectly demoed by Minecraft with RTX.

So - what about performance? Well, Minecraft with RTX supports both DLSS and DLSS2 - and the beta's performance hinges on this quietly revolutionary technology to keep the frame rates up even as the game forces your GPU to crunch some serious numbers. Without DLSS, this exercise would be something much less playable - but with it, as it is, it works brilliantly.

You'll still need access to a graphics card of the GeForce RTX series to have the power to properly run this beta, but I found on both a GeForce RTX 2060 Super and the vastly more powerful 2080 Ti with either DLSS solution turned on it all ran pretty well, always in excess of 30fps, sometimes close to 60fps. I experienced some chugging when doing some serious building with ray tracing intensive elements like glass, iron bars and other semitransparent blocks - but these hitches would stop as quickly as they started.

This is a beta in a very real sense as opposed to in the promotional demo 'dressed up' as a beta sense - and so some performance hiccups make absolute sense. I honestly think it's astonishing how well it does run at this relatively early phase - You can see performance in action complete with toggling ray tracing on and off in real time in video form below.

It's honestly all very impressive, and though it is indeed early days, it adds Minecraft to a list of games with great ray tracing implementation like Control, Metro Exodus and Battlefield 5, among others. In execution of a high-end feature on a simplistic game, this release probably has most in common with the recent release of an RTX compatible version of Quake 2.

The Minecraft release is particularly clever, however, because Nvidia is leveraging the user-creation aspect of the game to put the benefits of ray tracing in the hands of creators. The hardware manufacturer has released a suite of worlds to help inspired and demonstrate - with these worlds from master Minecraft builders, Mojang developers and Nvidia technicians serving to demonstrate what the ray tracing technology can do. Some of these worlds are built as pure tech demos, while others have puzzles and actual gameplay challenges built around the ray traced visuals. The levels are a great showcase, and are free to nab for anyone who owns the Bedrock version of Minecraft.

It's worth keeping in mind that while this is a version of Minecraft built by Nvidia and Microsoft to showcase the former's RTX solution for the feature, it's going to have wider-reaching implications. The Xbox Series X will support ray tracing as a major feature, and Minecraft is one of the few games that's already been shown running on the Series X with ray tracing. In this sense, this demo is also curious for non-PC gamers, as it gives a deeper glimpse of what is possible with more customization.

Regardless of if you're in the market for a big PC graphics card upgrade, a new console, or neither, this demo remains fascinating. Well-constructed showcases of ray tracing continue to feel like a glimpse into a future where this sort of lighting, shadow and reflection fidelity is standard across all games - and Minecraft might make one of the easiest to understand demonstrations yet.