As Mono and their new-found friend leave the dark forest behind, they find themselves in a mysterious city - seemingly deserted - with the nowhere to go but forward.

In the alley, both of you grab the dumpster to reveal a hole in the fence into the playground. 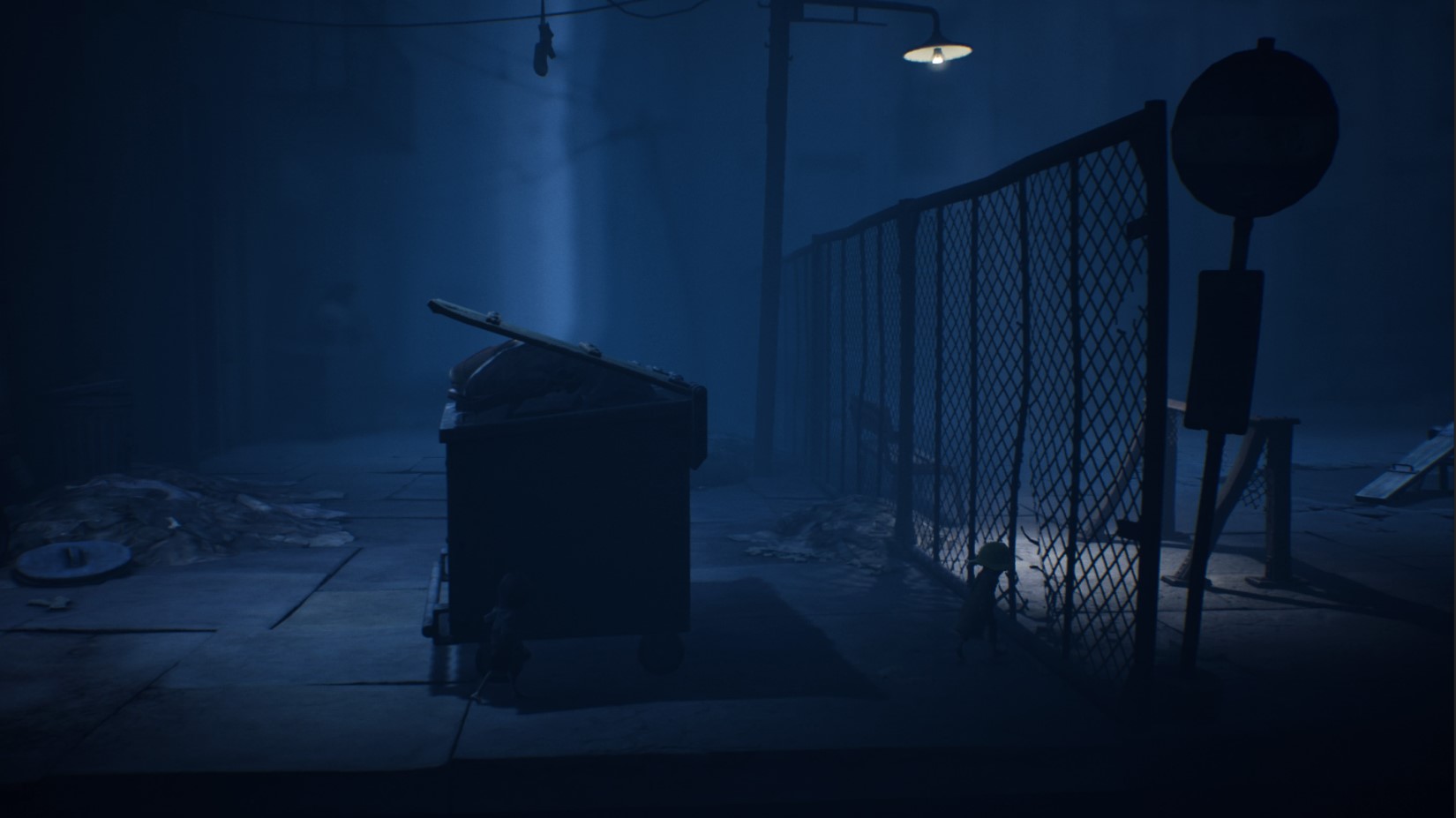 Next to the door, climb onto the dumpster to collect another hat, then climb up the white sheet into the window. 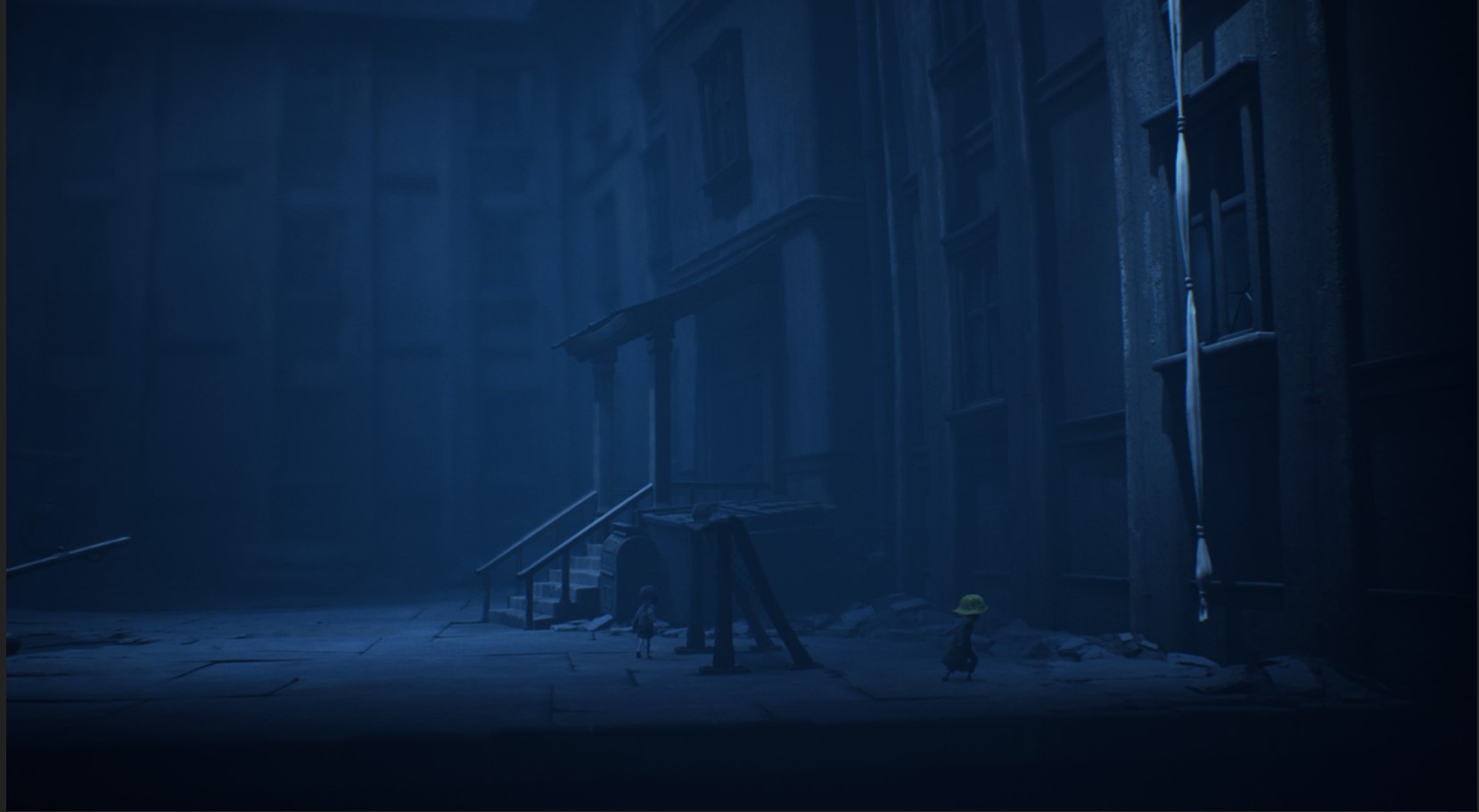 Inside, go over to the right and jump up to pull the lever, then go up the hallway and into the doorway on the left. 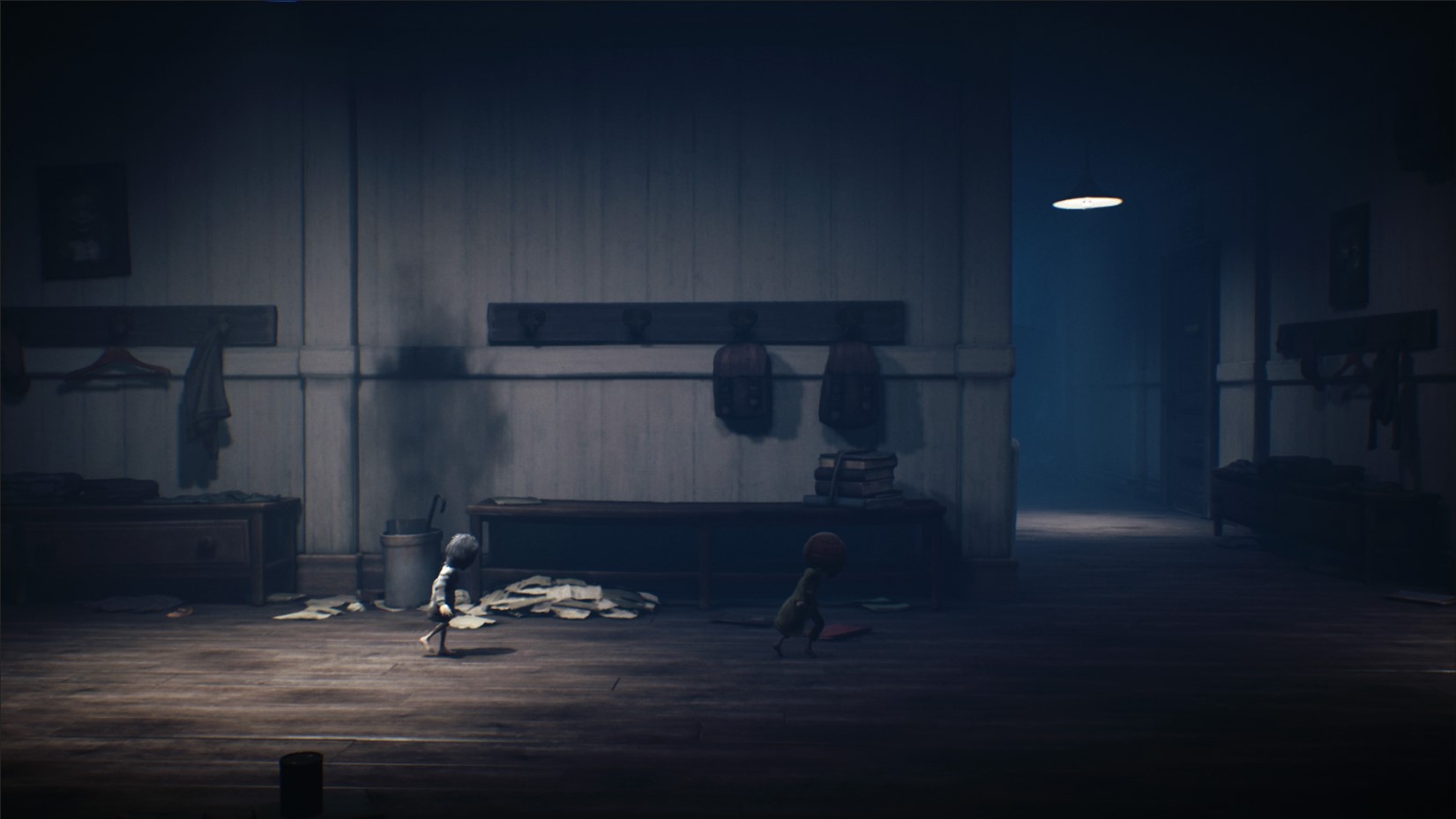 Here, you’ll see a ball in the middle of the room, grab it, keep hold of it and return to where you pulled the lever.

You can see light coming from the eyes of a picture on the wall, so throw your ball at the picture and it’ll fall down to reveal a path forward. 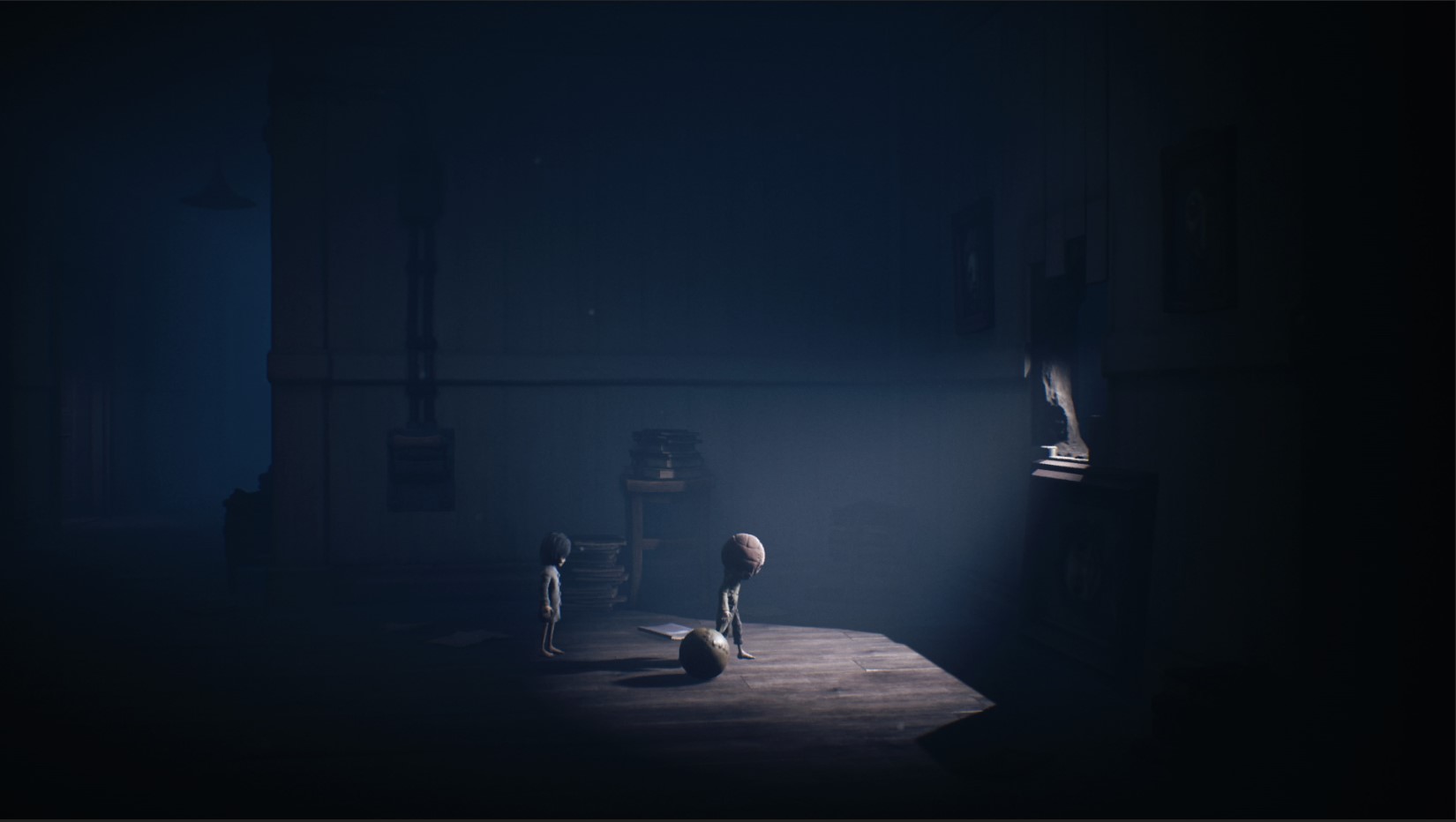 In the next room, jump on the weak floor in front of the chair to drop down. 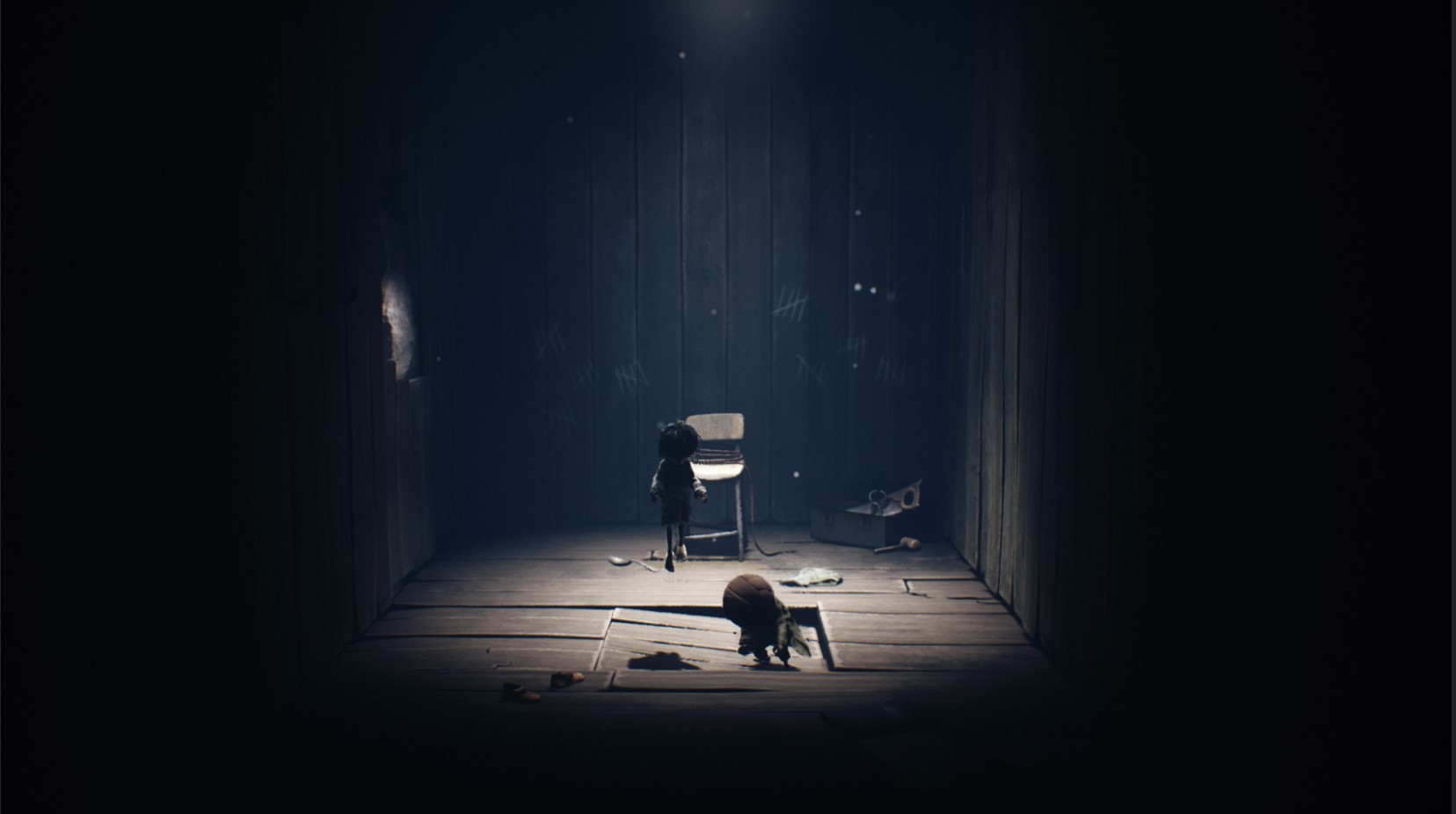 Then skulk through the tunnel you find yourself in until you reach a place to drop down. Yank off the grate at the bottom of here, then proceed through the revealed tunnel.

In the hallway, walk towards the light, but watch your step in the next screen.

Step on the raised floorboard near the top or bottom of the screen, then continue forward, still watching out for the paint can swinging Home Alone-style. 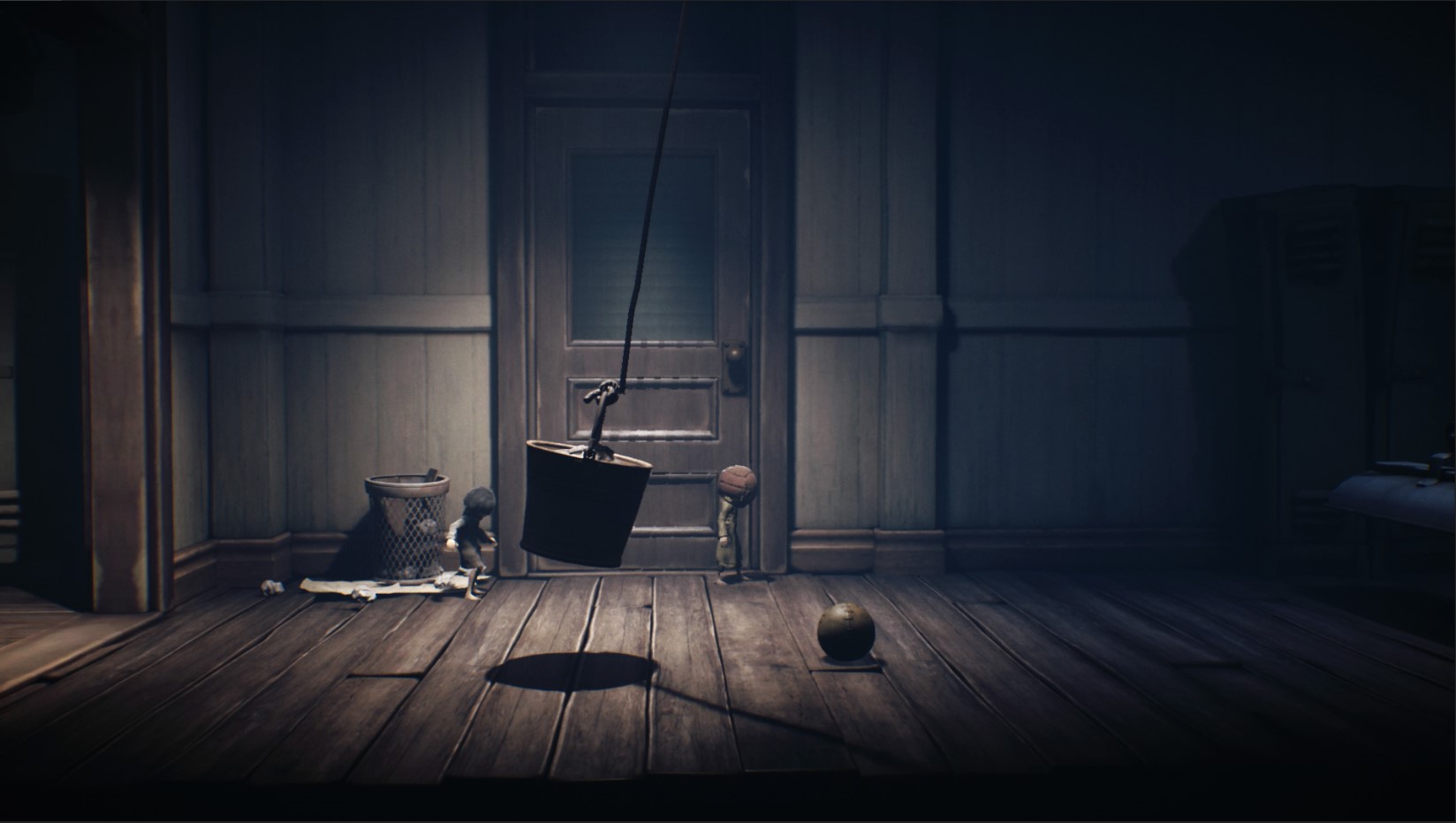 Crouch underneath the descended light and the lockers as well.

Then on the next screen, step on the raised floorboard at the top of the screen again to avoid more traps. 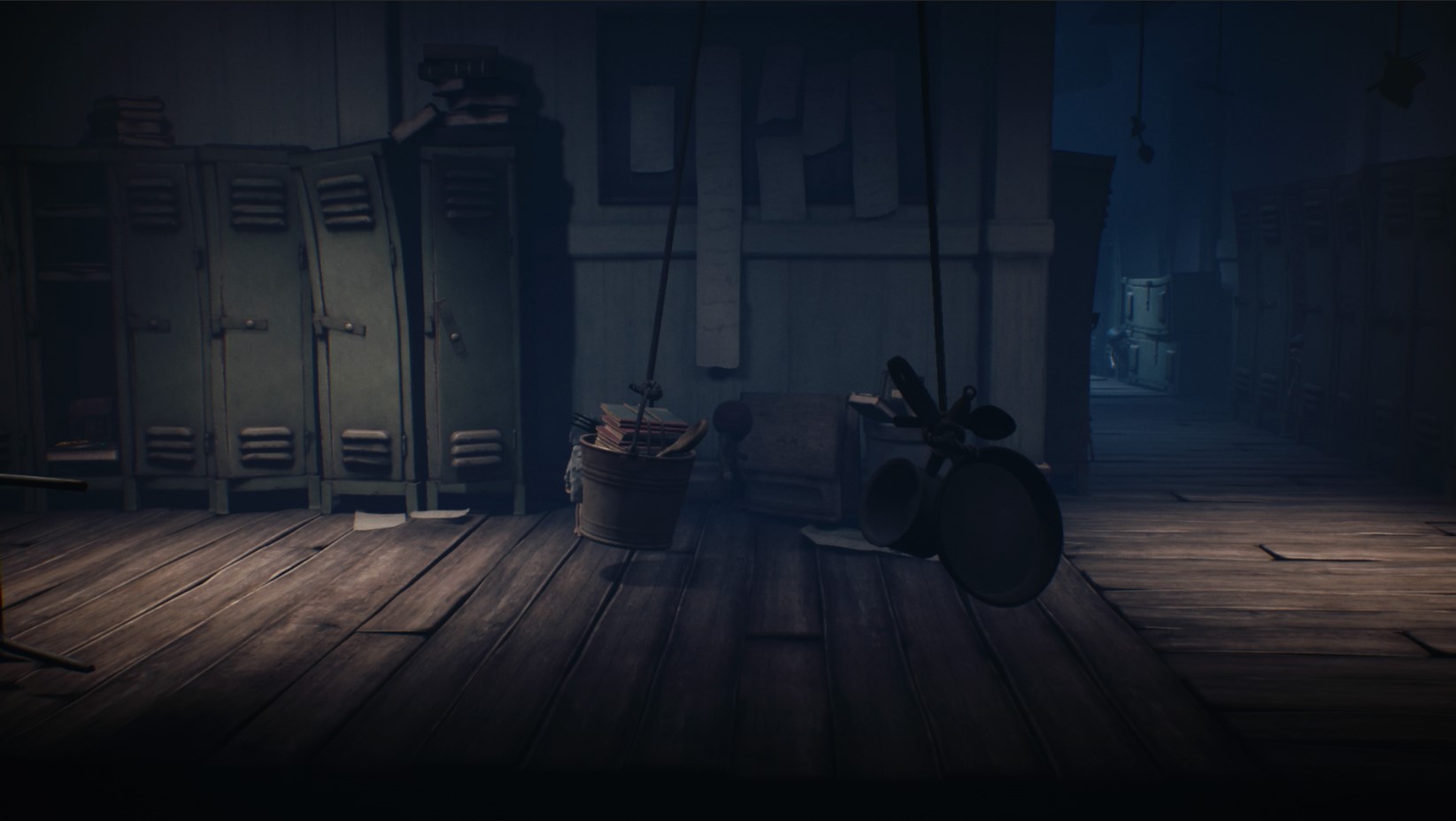 Now go up towards where you can see the peeping kids in the next hallway, making sure the locker doesn’t fall on your head when you step on another raised floorboard - before advancing through a hole in the wall on your right. 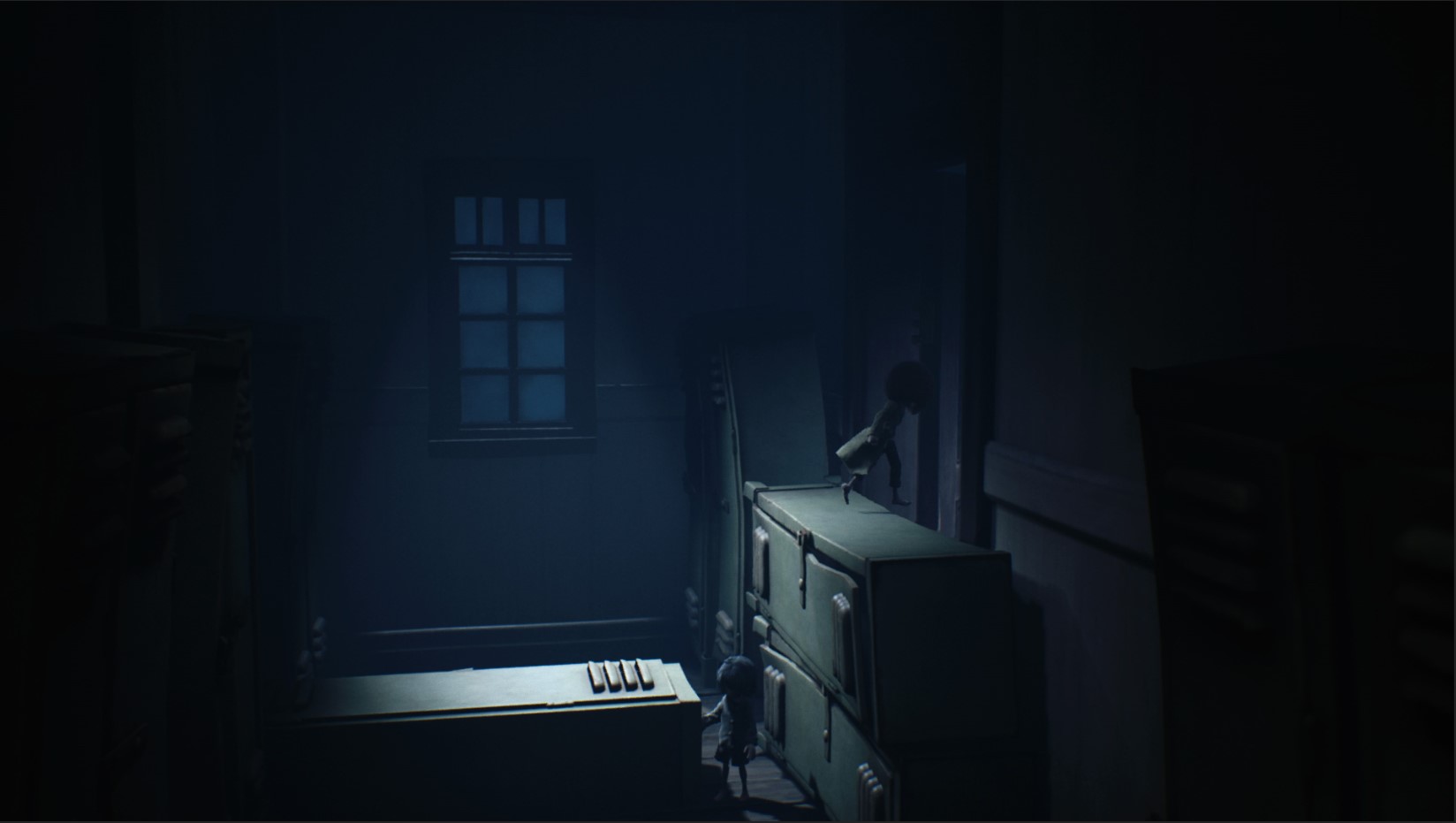 The next floorboard is a naughty trick. The raised one isn’t a trap, but the one that’s two down from it is.

Jump over the trapped floorboard to where the duck is. Then run and jump back to where your friend is, triggering the trap as you go, so that it swings past you and you can use the light to climb up the table. 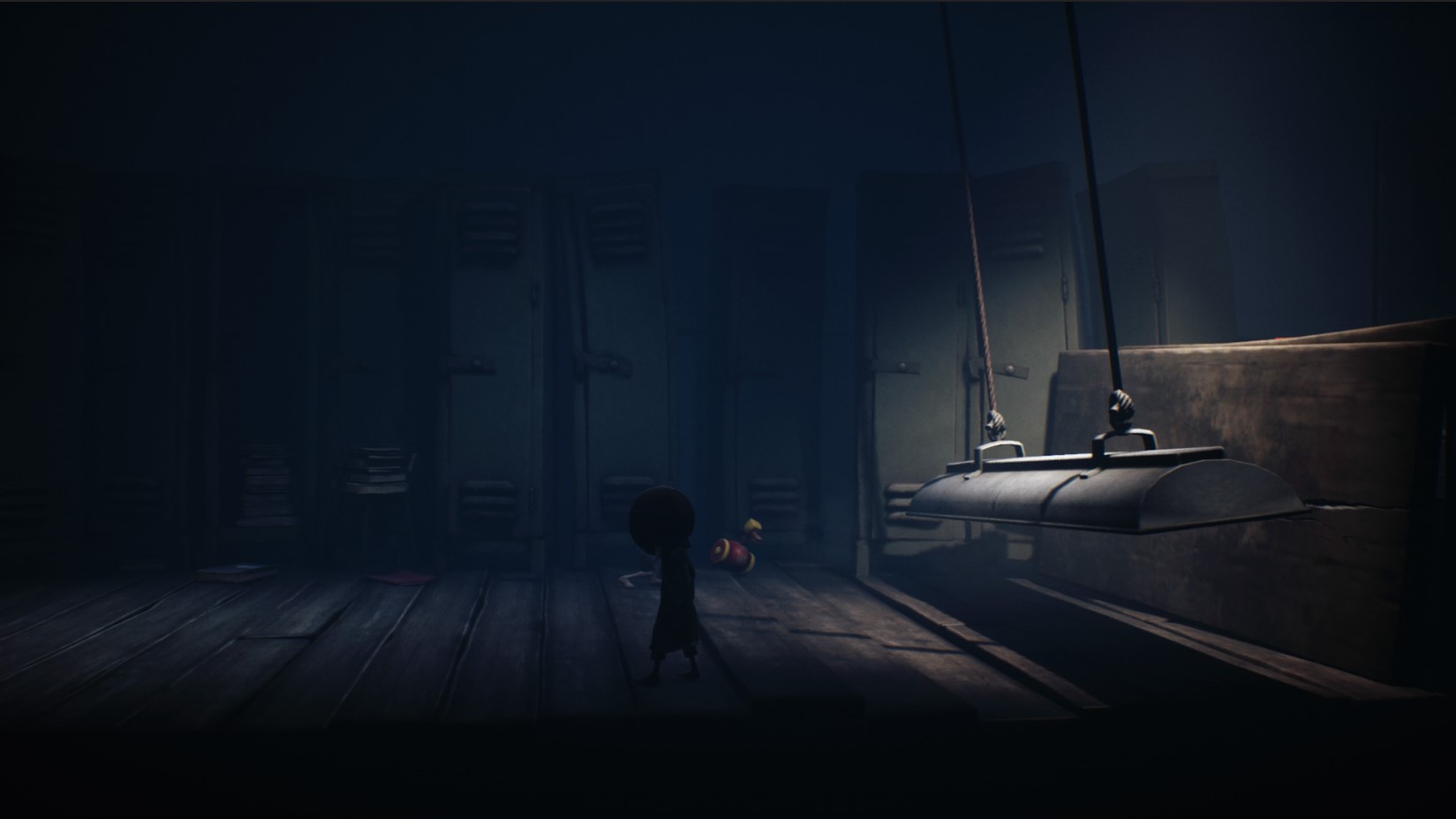 Continue through the next corridor and watch the cutscene.

When you regain control, jump over the locker and grab the hammer. 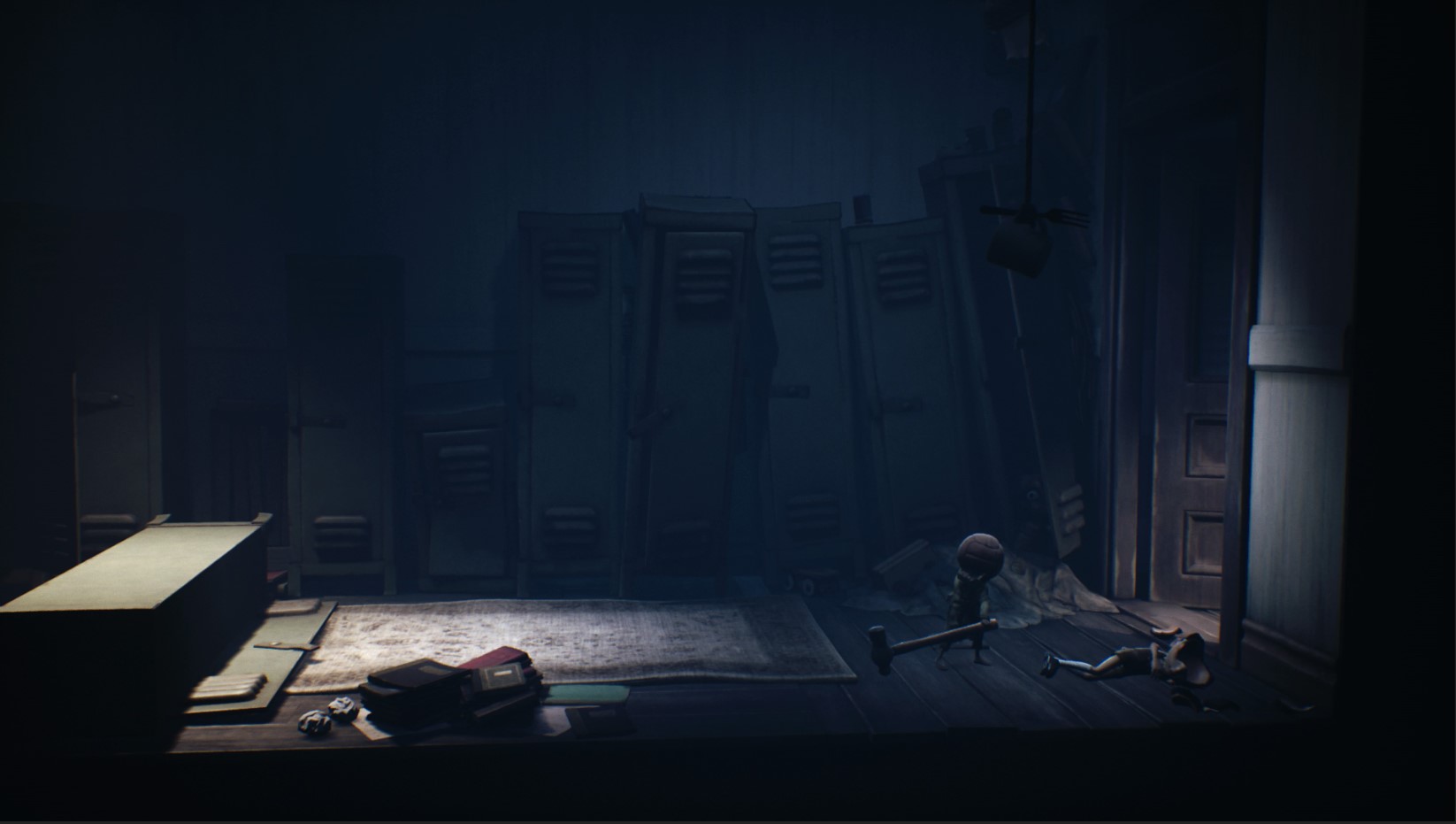 You can press jump while you’re holding it to swing it and smash the little doll dudes.

Do so with the one peering around the door on the right.

Go through the door and in the next room, hide under the desk on the raised floorboard to trigger a trap that swings and smashes the next doll. 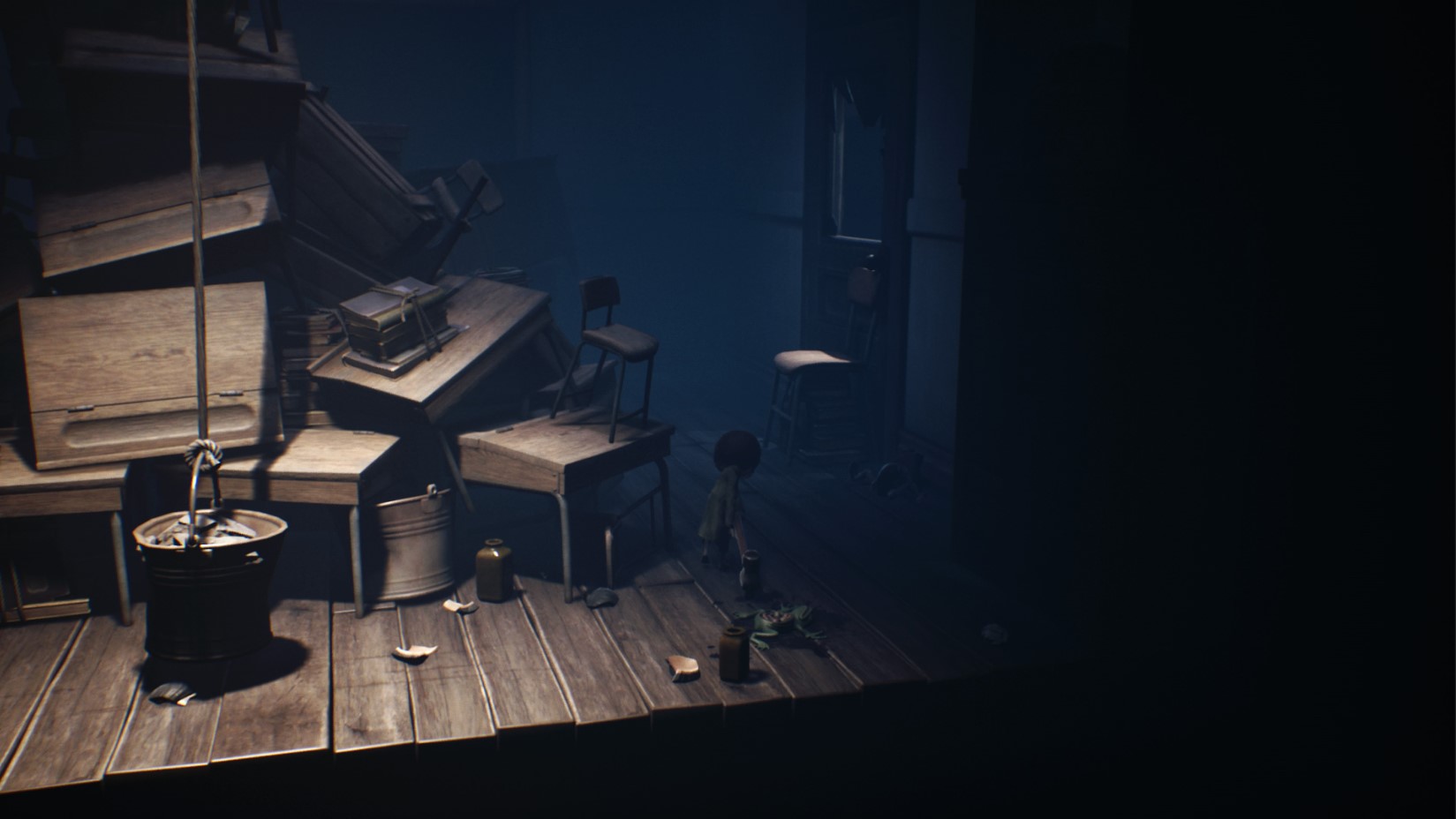 Climb up the chair and pile of books to get into yet another corridor.

Continue along the hall and you’ll reach a classroom.

Give the dolls in the chairs and wide berth, but use their desks to shield yourself from the teacher’s gaze. 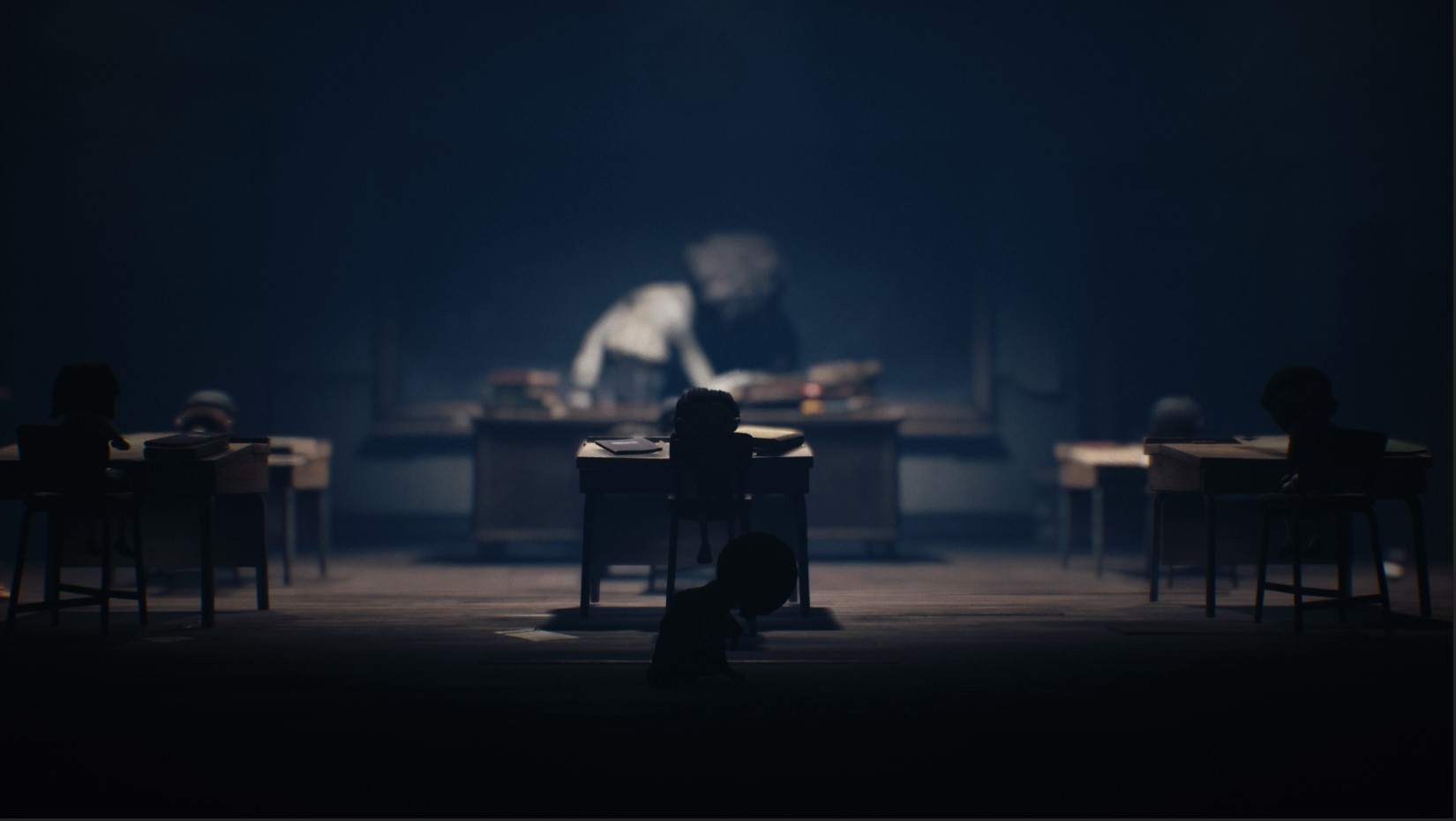 Only move between the desks when she’s writing on the blackboard - you’ll know when she’s about to turn around when she slams the chalk on the board.

In the side cupboard, climb up the bookcase on the far side a little and it’ll tip over.

Jump over to the side of it as soon as it starts to tip and you’ll be out of the crush. 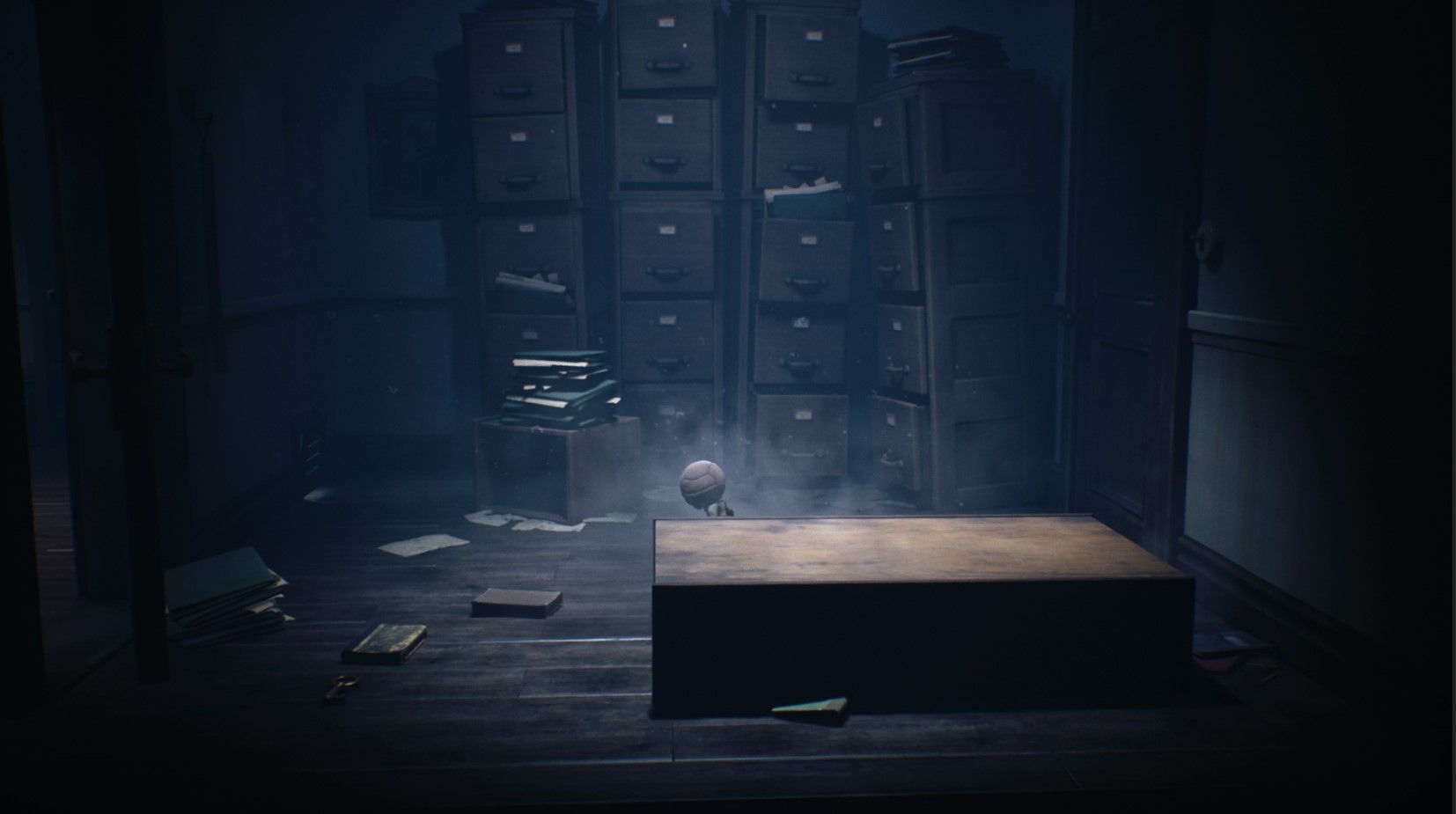 When spooky mama comes to investigate, hide in the open box with files on top of it, towards the top of the room.

When the door is closed, grab the key and retreat through the grate that opens.

In the classroom, you need to stay out of the gaze of the teacher while the dolls have their heads down working. 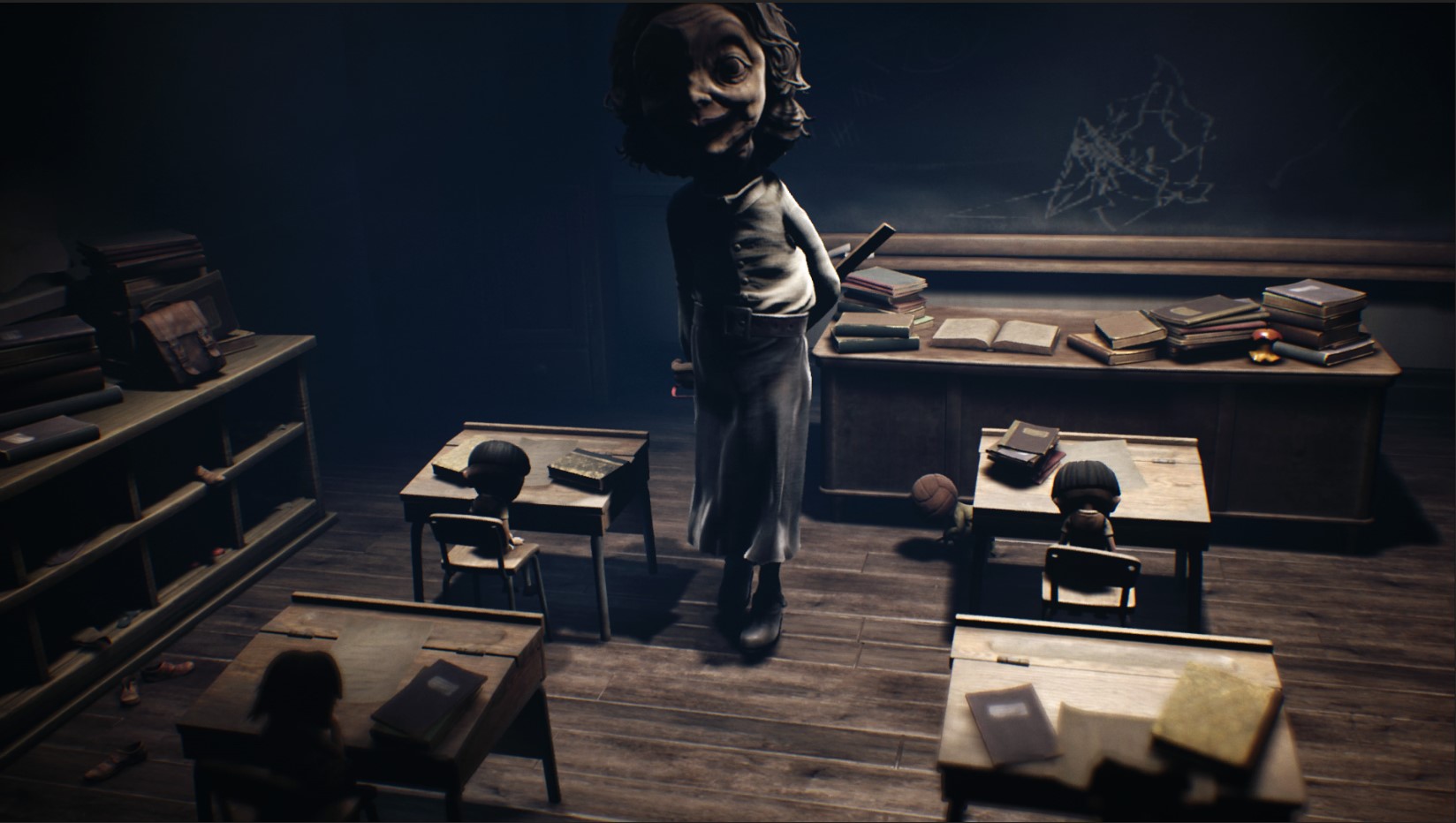 This bit is tough to work out, but you need to follow behind her as she walks across the room, then when she leans over to look at the doll, slip past her towards the bottom of the room. 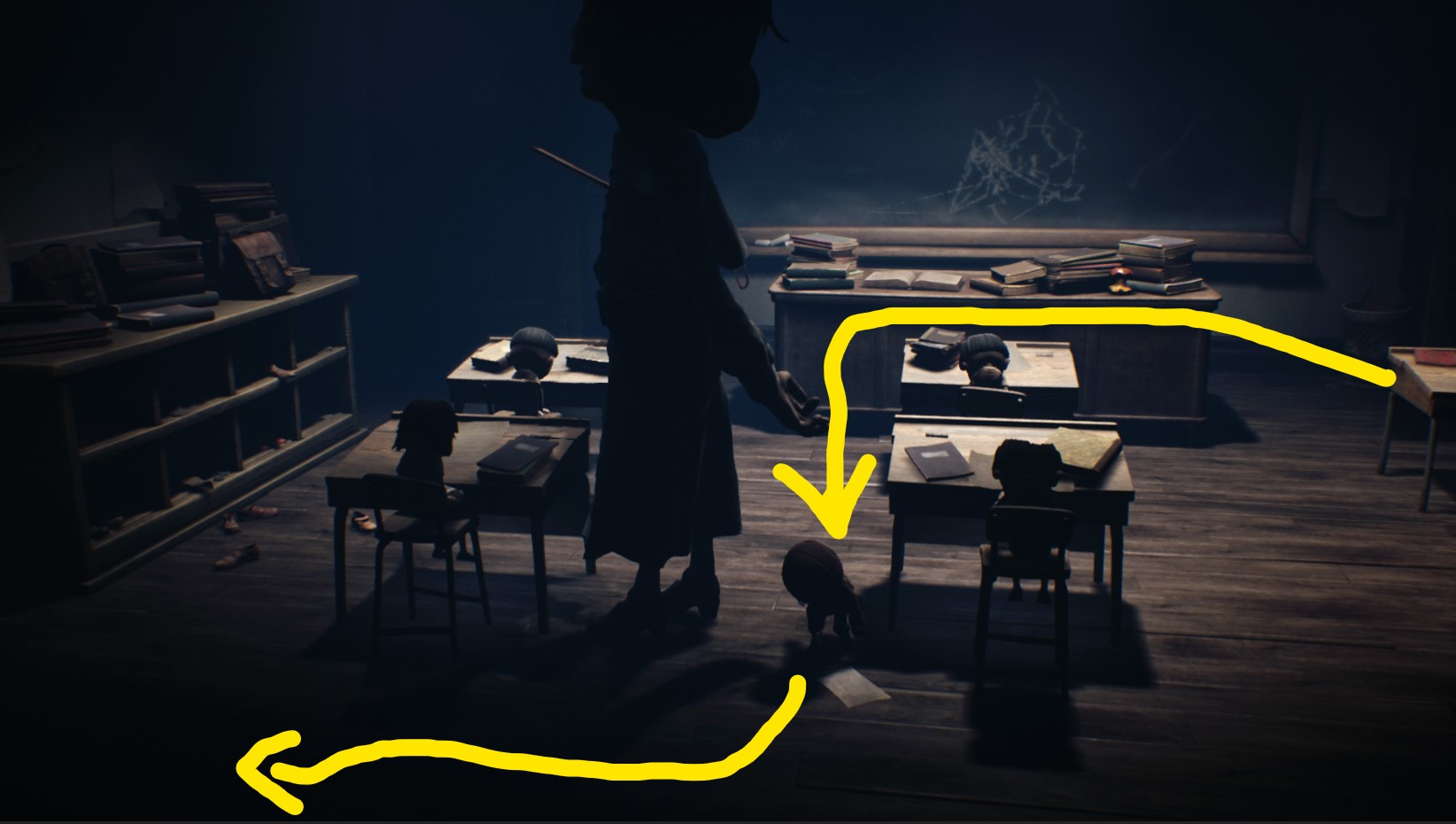 Then when she turns around towards the front of the room again, make your way for the door. 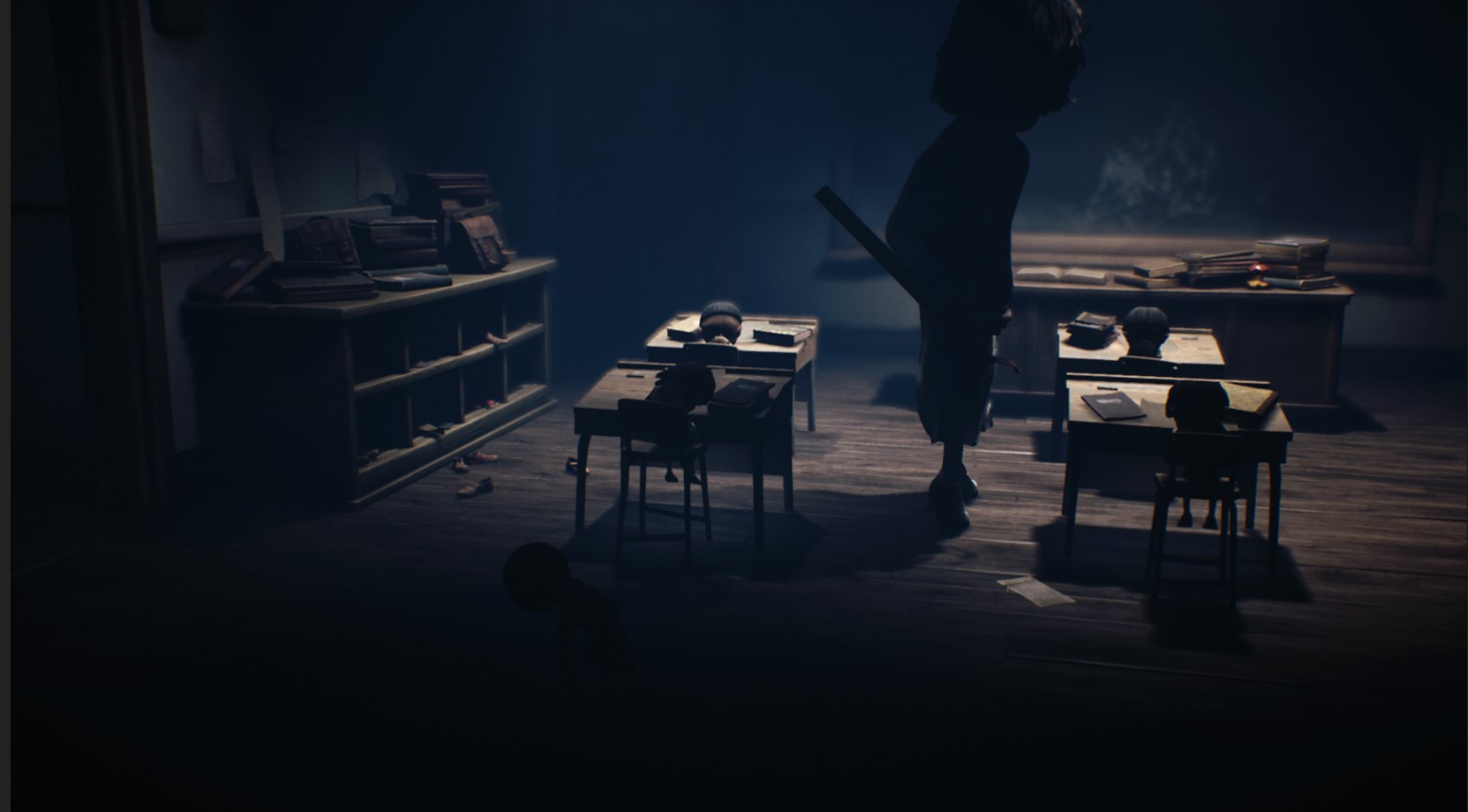 At this point she might spot you, but if you sprint, you should be able to make it to the locked elevator without her catching you.

When you reach the top, head right into the next room, where you’ll find a doll drawing. 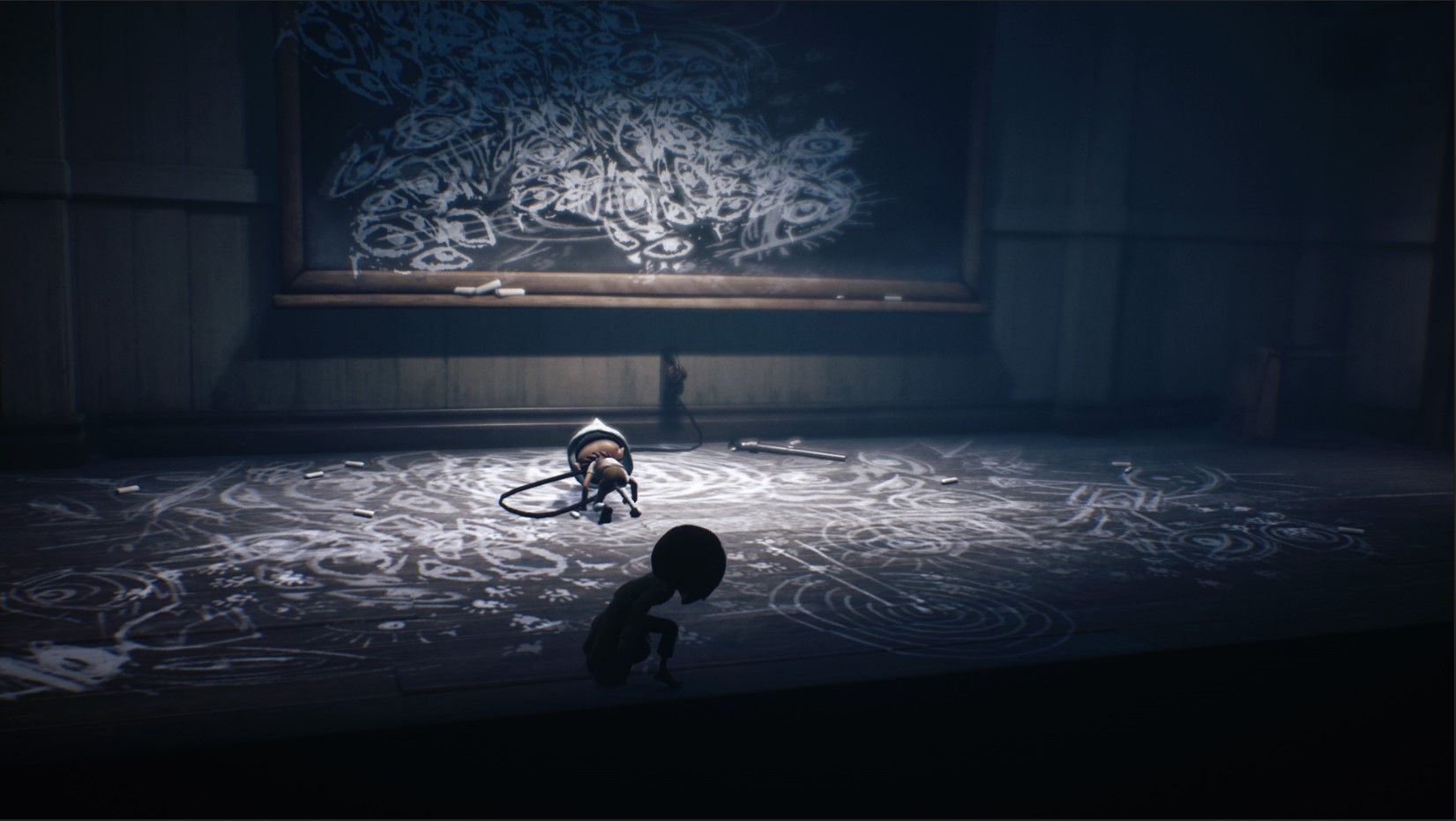 You need to trigger him to attack, then get him to fall over at the end of his leash.

When he’s down, sprint in, grab the pipe, then bash his skull in with it. The timing for this is difficult, and will likely take you multiple attempts even though you know exactly what to do.

Then use the pipe to break down the door on the far wall and climb up the drawers to get into the pipe.

As you drop down you’ll trigger the teacher. Carefully walk around to the other side of the room and pick up the jar in front of you to stop it from falling.

Then, hide in the box at the front of the screen when she cranes up to look at the other side of the room.

Climb up the knotted blankets, then tiptoe to the far end of the screen and push the plank to give you an exit. Go fast when you push it over to avoid the teacher. 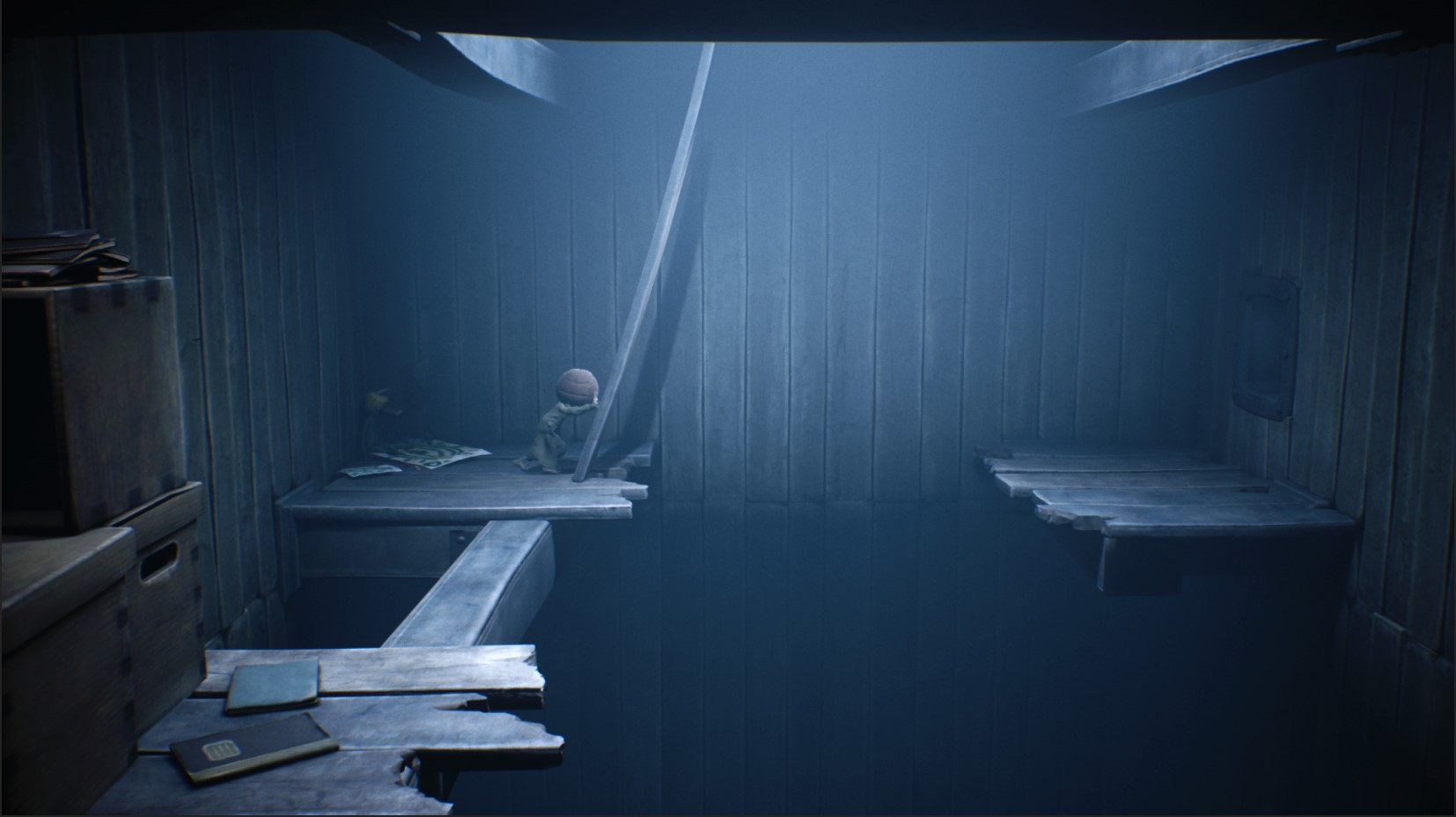 Make your way through the tunnel and you’ll drop into a library.

Use the shelves on the near side of the screen to drop down, then roll the wheeled ladder over to the bookcases to climb up. 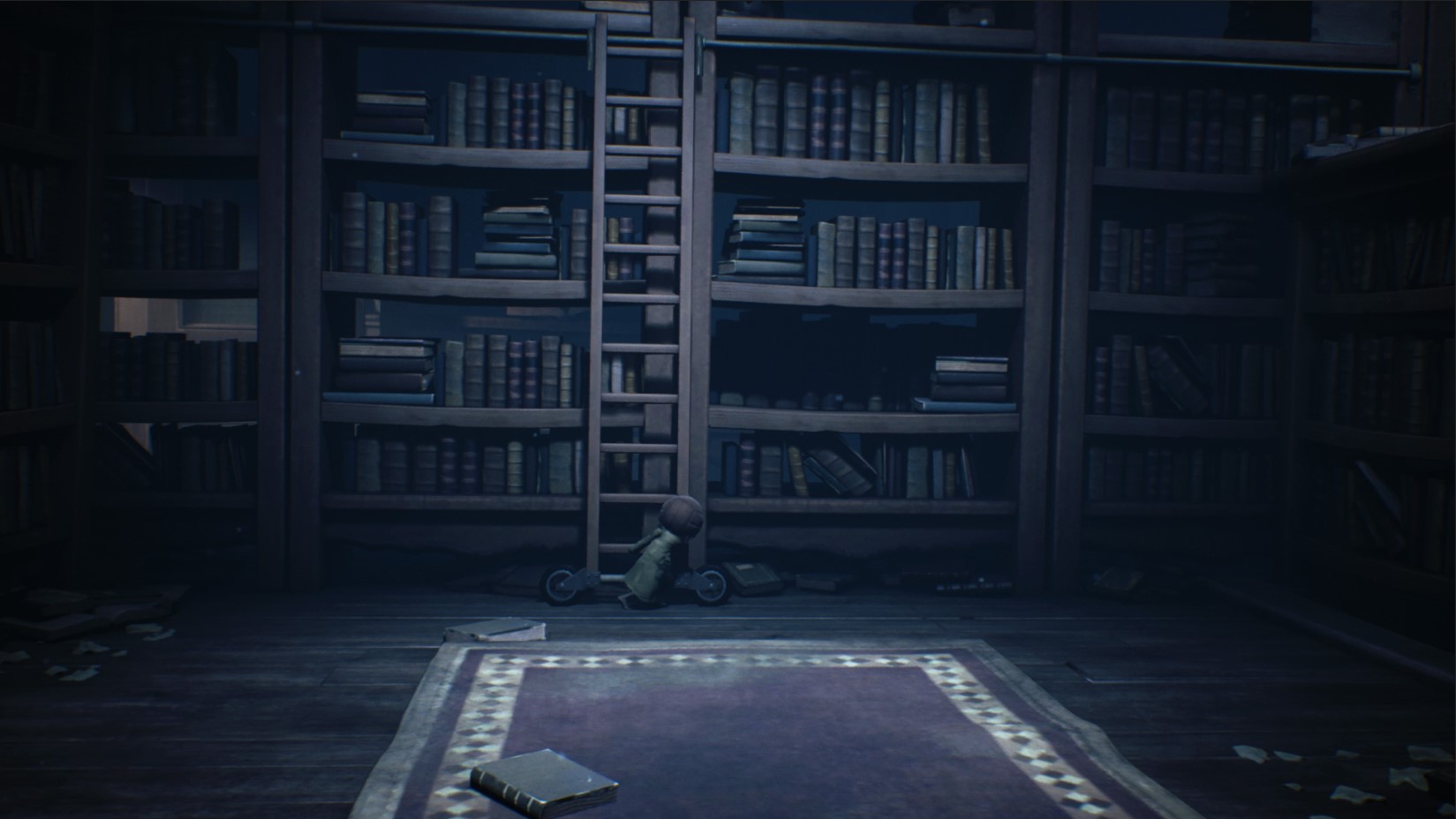 On top you’ll trigger the teacher again, so get ready to run.

Hop up the step then run as fast as possible to the gap in front of you, pressing crouch while sprinting to slide. 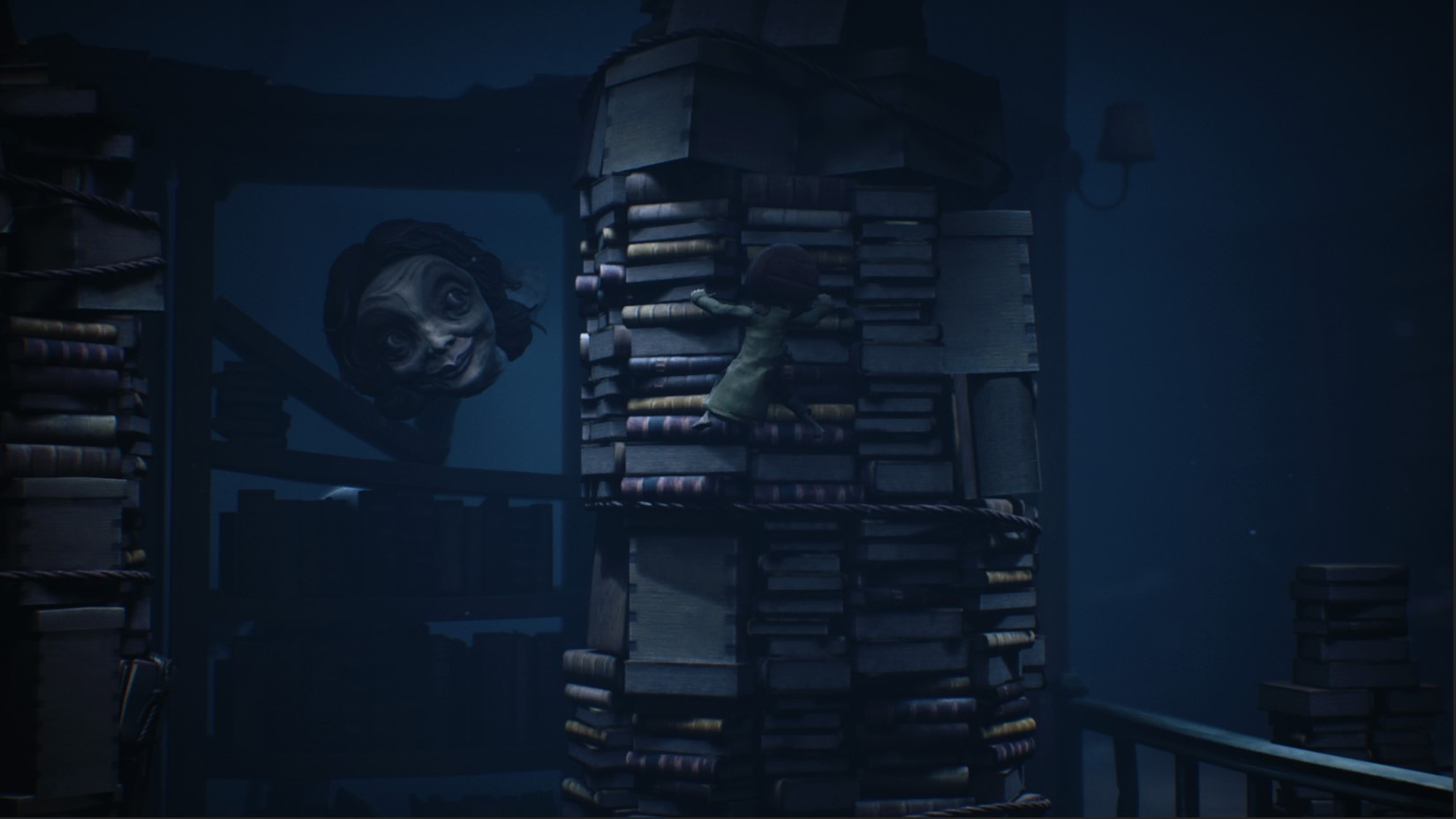 On the landing, hide in the box towards the top of the screen and wait for the teacher to open the door on the right for you.

Drag the box full of books to your left to the door then jump and grab the handle to open it. 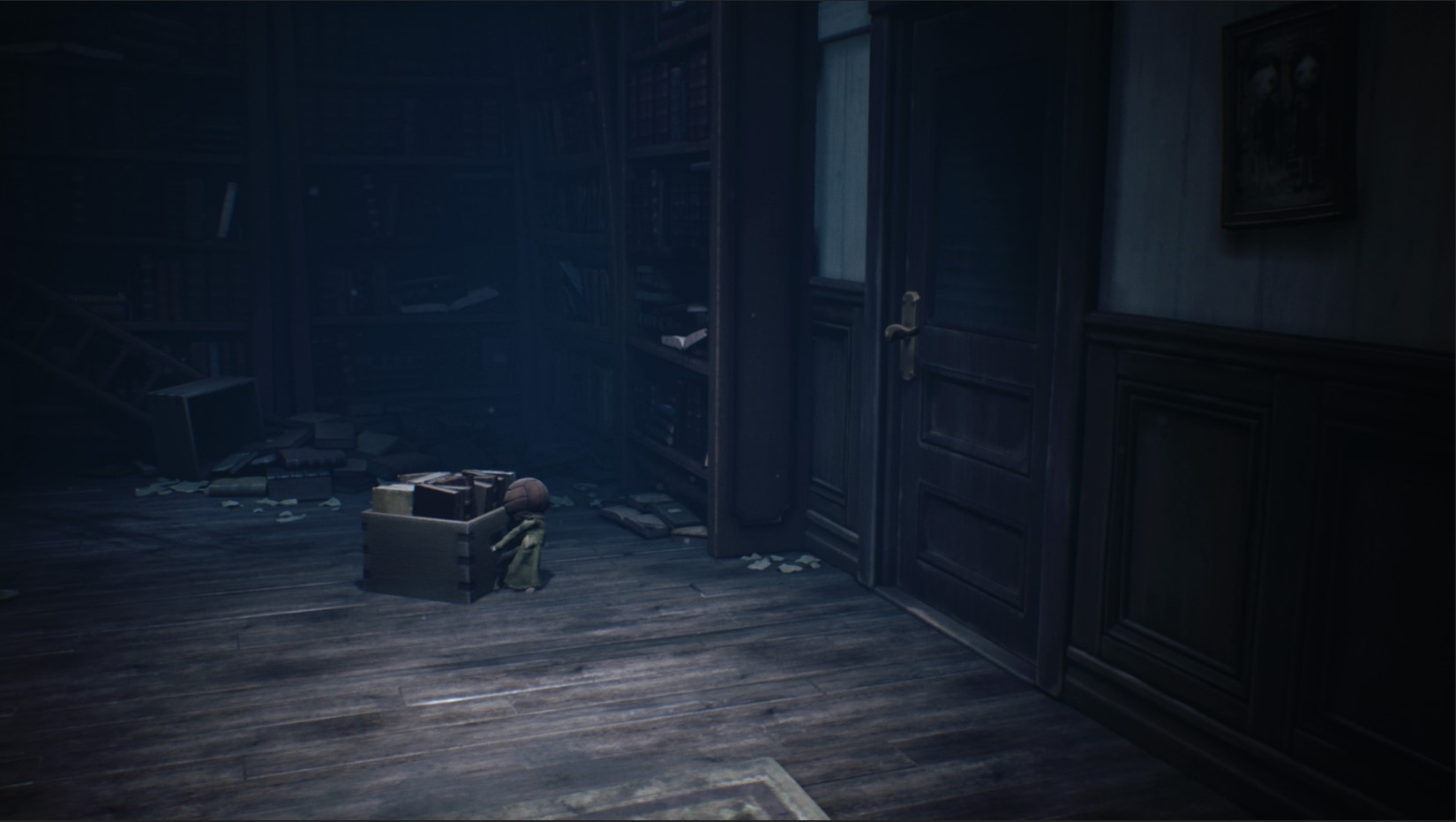 When your pass through the door, you'll be into a new part of the school, so follow on to the next part!