A first teaser trailer has confirmed a "fall" release for Battlefield 3, after Game Informer revealed the hugely-anticipated shooter as its March cover last night.

This is the twelfth main entry in the Battlefield series, not including expansions.

DICE will not support Windows XP with BF3.

Set in US, Europe and the Middle-East.

A beta will take place this year.

The game's first trailer was due to release today, both on GI and at the Battlefield 3 site, but leaked to YouTube this morning.

EA has now released the footage on the game's official site.

Game Informer has published some first details on the game, such as "64-player multiplayer on PC, jets, and the ability to go prone."

A Swedish retail listing (via the EA forums) has posted the shooter's box-art.

The game will see you play as the US Marines in locations like the US, Europe and the Middle-East around "claustrophobic streets, metropolitan downtowns, and open, vehicle-friendly landscapes as you fight your way through the war of tomorrow."

The mask finally comes off

Battlefield 3 will make its first appearance a full year-and-a-half after it was first mentioned. A more formal reveal will take place at GDC on March 1 as part of an EA Partners presentation.

The game will release in the final six months of 2011, according to EA CEO John Riccitiello.

Yesterday, DICE GM Karl Magnus Troedsson confirmed that PC versions of Battlefield 1943 and the Onslaught mode for Bad Company 2 were canceled so that the studio's full attention could be on Battlefield 3.

The third Battlefield is the first to use DICE's new Frostbite 2.0 engine, and is expected to go into beta before October 2011, thanks to a 12-month limited cross-promotion with last year's Medal of Honor. 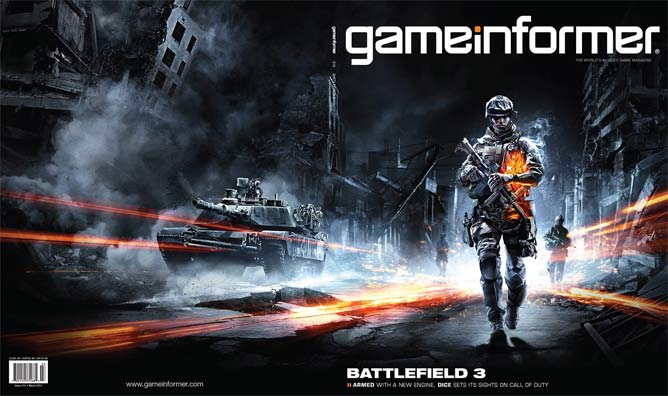