Battlefield Portal represents a bold move for the series, and one that could only come from Battlefield fans.

It is not a stretch to say that Ripple Effect Studios (formerly DICE LA), has had a lasting effect on the Battlefield series. The once small support studio turned Battlefield 4 around. It fixed many of its problems, built a solid feedback mechanism with the community in the process, and supported the game well beyond what anyone had expected.

Ripple Effect has contributed to other Battlefield games since, but the team has built up a lot of goodwill with Battlefield players and fans over the years in large part because of that work on Battlefield 4. The idea that this team is creating a big component of Battlefield 2042 was always exciting, and now that Battlefield Portal has been revealed, I wanted to explore how we got here.

Battlefield Portal is a suite of modding tools that allow players to design their own experiences, using content from BF2042 itself, as well as select maps, modes, weapons, vehicles, and gadgets from BF1942, BC2, and BF3. Portal also comes with discovery tools that include a standard browser, and featured lists curated regularly by DICE and Ripple Effect.

At a preview event this week, I spoke to Ripple Effect senior design director, Justin Wiebe, to try and get a sense about what lead to Portal's creation, where the studio wants it to go, and how to manage that much content in a single game.

But how did Ripple Effect arrive at those specific three? According to Wiebe, a combination of "some emotion, some gut feel, and a lot of data."

"It was a fairly gruelling process. It's like going to Disneyland - you plan on a family trip, and you've got ten kids, but you can only bring three, you know. It's like, oh my goodness, how do you make that choice?" Wiebe revealed.

"We knew [BF]1942 was a shoo-in, right off the bat, because that's where it all began, so we knew that was going to be part of it. But after that, it got a lot harder. So we went through and said, 'Well, we don't want to pick anything that was just released over the past little while that people are probably still actively playing. Let's go look a little bit more in the past library to see games that people wished they can play or remember a little more longingly.'

"And so when we started narrowing that field, there were probably only about four or five true contenders. And then we just kind of went through not only [how] we felt about [them], and what we heard from the community, but also looking at the data of what were the most popular experiences played by fans, and that ultimately formed kind of the decision-making process for a lot of these."

But pulling from Battlefield's storied history presented a different challenge. The three chosen games are from different eras of Battlefield - BF1942 was even built on a completely different engine - and each one has a particular game feel. While you could, with enough tweaking, recreate some aspects of how these games felt to play - such as disabling prone in Bad Company 2 playlists - some things will inevitably default to Battlefield 2042 mechanics.

"The team has done a tremendous job of trying to recreate the feel, as close as they can. I mean, are we gonna get a perfect side-by-side comparison to all of these things? The goal is to try to say, Yes! But as we go through, there'll be some nuances that will be hard to replicate," he explained, adding that players will have control over some finer details that'll further help in replicating those experiences.

"So what we have done is to try to give players the ability to choose either historical or modernized settings for things like weapons, where if you want the weapon to behave and do the [vanilla] damage with all the recoil and everything that they had in those in those other games, you can do that. Or, if you want them to be a little more competitive, where you want players to use those [classic] weapons, but maybe you want them to [be used] against [BF]2042 weapons, well, then you can set it to more modern, in which case they're balanced to be competitive - mostly competitive." 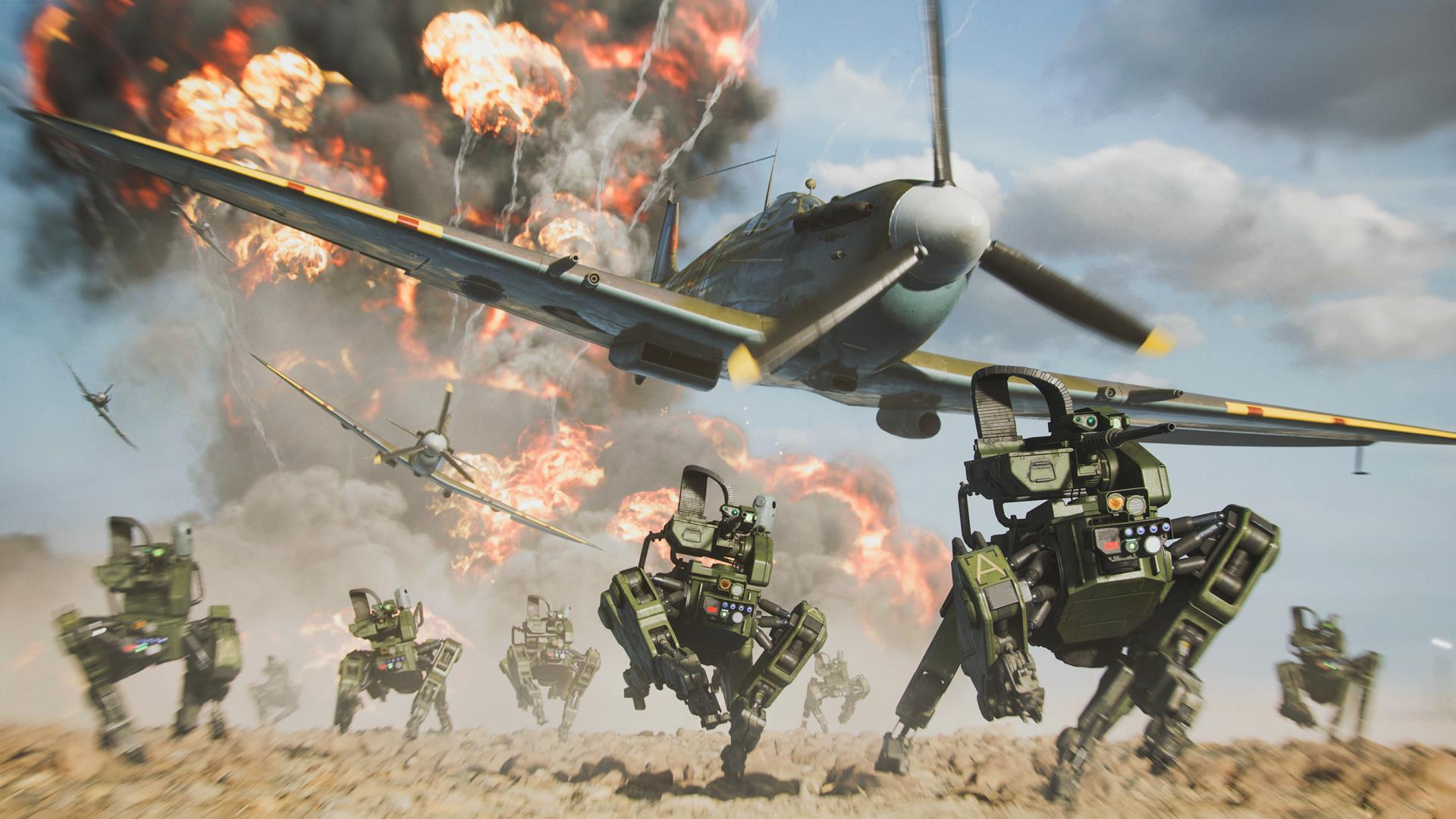 Rebuilding content from those games in the most modern Frostbite engine wasn't enough, and Ripple Effect didn't want all that work to only manifest in the two maps recreated from each game. So the studio started experimenting with bringing some of those classic weapons and vehicles into Battlefield 2042 maps, and kept on pushing from there, creating different ways for players to manipulate the sandbox.

This is also what lead to the creation of the logic editor, which allows players with the know-how to script custom rules and tweak the different variables in ways not possible with the standard options. Battlefield Portal does not, however, currently have a spatial editor, which is what would allow players to edit existing maps, and control things like spawn logic. There's also no way for players to create maps from scratch. Ripple Effect knows that these tools would give builders even more power, and Wiebe hinted that they could make their way into Portal eventually, just not at launch.

What does add an interesting wrinkle to all this is the addition of AI soldiers, which could end up playing a larger role in Portal than you might think.

"You're gonna be able to set things like the difficulty of [the AI], and there's certain things that you can tell them: you're allowed to do this, you're not allowed to do that. But because we don't have a spatial editor, you're not gonna be able to say, spawn AI over here and perform this ability. So trying to replicate something as complicated as a Destiny sandbox is probably not on the table right now," Wiebe revealed, when asked about the possibility of creating a PvE Destiny clone within Portal.

"We've tried to put a lot of effort into making them play just like a player would. So it would be really hard for people to tell the difference between an AI and a real human player because they will run around, they will drive vehicles, they will pick each other up, they will drop [each other] off at objective locations and things like that - it's a very intelligent system. And then you can tweak and tune some of the things they are and aren't allowed to do, including how difficult they are to play against."

When you create and launch your experience, it will exist on a dedicated server and live there as long as there's at least one player in the session. You won't be asked to pay any server rental fees, regardless of how big or small your creation is. You'll have control over cross-play functionality, and you'll get basic admin rights to make it private, kick/ban players, send server-wide messages and so on.

"Everything is gonna be launched through the cloud server system," Wiebe confirmed. "It's very similar to how you would host a custom game on Battlefield 5."

"When you create an experience, all the data is kept on a server, which is accessed by both the the web builder as well as the [BF]2042 game. So no matter where you log in, any experience you've created will be listed and stored there. The moment you choose to deploy the experience, that is when we will run it on our dedicated hardware based on region."

My biggest worry coming out of this event wasn't about the quality of Battlefield Portal, the number of options Builder has for players or really anything specific to the experience. It seemed to me that Battlefield 2042's various components might be competing against one another somewhat. The two revealed so far appear to be fleshed out enough that they could stand on their own. Then you add to that whatever Hazard Zone is, and you get a pretty meaty package that seems to be pulling players into different directions.

Wiebe and team, however, choose to look at it a different way.

"The way I like to look at it is: players are going to almost flow through the game at various points in their interest," Wiebe posited. "Every player is different, but my expectation would be [that] most players would come in, they'll play [BF]2042 to start, get a feel for all of the new maps, the dynamic weapon swapping system and things like that. And then, after they've kind of gotten used to that, I could see them starting to transition."

"Maybe if they're more interested in high stakes gameplay, some players will transition to Hazard Zone," he went on. "We are emotional creatures, sometimes people just want to take a break from the high stress, high tension experiences. And that's where Portal can kind of pick them up and come in and say, 'Well, we don't take ourselves too seriously, this is the place where you can go to have a little more fun, to have something a little more unexpected.'"

A key part in managing that much content is also going to be live and limited-time events, which Ripple Effect hopes will more organically bring players to the different facets of Battlefield 2042 without any one of them having to fight for their attention.

"I think that if we plan it properly, we can kind of push players to different parts of the game at different times, rather than everything trying to compete for players attention all the time," he added.

Wiebe wouldn't confirm what other content Ripple Effect has in the pipe for Portal, or whether that'll take the form of more maps from the three games, or new games altogether. He also didn't specify whether Portal will be Ripple Effect's sole responsibility post launch.

Beyond supporting Battlefield 2042, and Portal post launch, Ripple Effect is also working on something new. My attempt at trying to get even the tiniest of hints about what it could be sadly failed.