Divine Beasts are the closest things to typical Zelda dungeons in Breath of the Wild, and Vah Medoh is the easiest - but it still has brain teasers.

You've made it - it took a ton of flying about in updrafts and some expert bow skills, but you're aboard the gigantic flying divine beast. The view of Hyrule from up here's amazing, and despite the Rito hero's best intentions you find yourself alone. We think this dungeon might be named after Wind Waker Rito sage Medil, for the record.

We've got lots more help for Link's grand adventure if you want it - simply check out our full Zelda Breath of the Wild guide. 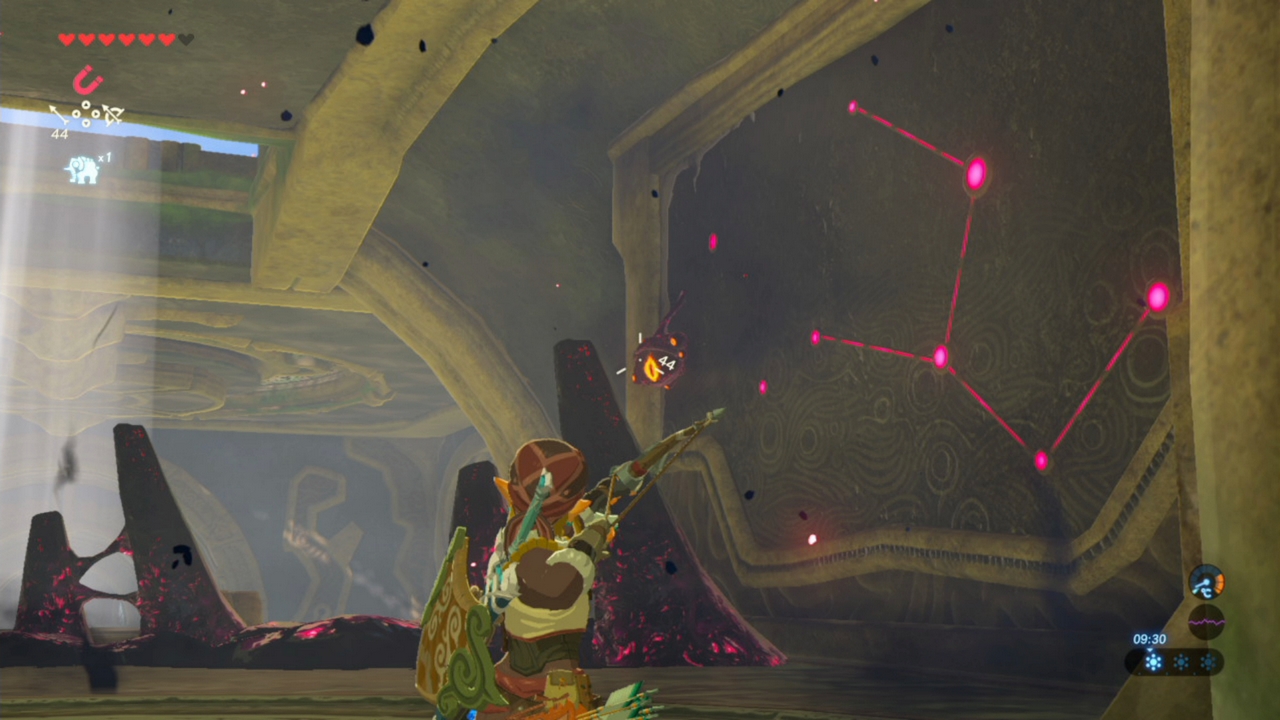 In previous Zelda outings this would've been named a dungeon or temple, though this is still pretty different to those concepts in previous games. There's still the basic dungeon layout going on here: a series of puzzles to complete and an over-arching theme to the style of the dungeon. For Vah Medoh, this is wind. Think of this as the wind dungeon, in finest Zelda tradition.

Rather than keys and locked doors (as in previous Zelda games), your goal here is simpler. You need to activate 5 different terminals scattered around Divine Vah Medoh. The dungeon layout is quite open, so the challenge is in getting to or activating these terminals rather than opening locked doors and such.

Once you get access to the map you'll also be able to make Vah Medoh move its wings, and doing this tilts and twists the whole dungeon, moving objects around. This is absolutely vital for completing the Divine Beast Vah Medoh dungeon - so as the voice of the Rito champion tells you, you'll first need to grab a map from the map room. So.. let's get that map.

Inside Divine Beast Vah Medoh: Getting a Map

Once the cutscene has played out and you have control of Link properly once again, you'll be aboard Divine Beast Vah Medoh. Turn around and look behind you towards Vah Medoh's tail. There's a chest back here, and some Ganon corruption gunk. This stuff will be encountered frequently, so get used to it. This is a nice easy start to the dungeon - just walk back there, use the short ramp to jump over the corruption, then grab the chest.

Once you've opened the chest, look to the right of it. There's a Ganon's corruption eye thing (what are these things?!), and if you shoot it with an arrow the corruption that was previously in your way will disappear.

Turn back and head through the entrance proper. Into the belly of the (divine) beast! There's Ganon's corruption ahead, but if you look to the right hand side of it there's an eye you can shoot to get rid of it, just like with the chest.

Walk forwards - there's an updraft here, as you found lots on the way here. Ride the updraft with your paraglider, and when you end up at the middle area with metal blocks keep in mind if you need to you can use your Magenesis rune power to drag them into a better position.

Run and jump across, kill the lone guardian, then download the map at the terminal. Now for the actually difficult part... we need to activate 5 terminals. The terminals are scattered throughout Vah Medoh, and so your path to activate them is through completing various puzzles and making use of the new control you have over the Divine Beast Vah Medoh via the map screen.

If you head out of the map download room and hook right you'll find a ledge you can drop down onto - on this ledge there's a chest you can get. Drop down once more and there's a chest covered in Ganon corruption. The eye in the middle is a hard bow shot to make, but you can also get it by tossing a bomb into the middle and detonating.

Take the updraft back to the main hall, with the metal blocks you can move with Magnesis. They're all well and good, but it's the stone ones we want to move... and we can. You can either use stasis to freeze and hit these blocks or tilt Vah Medoh on the map screen to make them move - either works.

With that noted, use that to head to the opening towards the right wing of Divine Beast Vah Medoh. One of the stone blocks can be moved right to that opening to provide a platform.

In this room there's some purple corruption gunk on the ceiling that'll spit out enemies at the far end, so run down there and take that out with a well-placed arrow first.

Now hit the switch in the middle of the room. That switch will open a window, sending wind gushing in. There are fans on the ceiling... we know what to do, right? Very Wind Waker.

One of the fan switches is already in the air's path, so leave that for now. The other needs to be pushed there. Hit it with Stasis, then with a bomb arrow - you should have some of those left. It may take two goes, but you'll get it into place. A small gate will open.

In the path of the air behind the fans is a giant battering ram, and up the way from it is a switch. By lowering the barrier we can now use those two together.

Once again it's stasis or tilt - either tilt Divine Beast Vah Medoh one way then the other to make the ram draw back and slam the switch or freeze the ram with stasis and slam it a bunch with a heavy weapon. I actually found stasis a little easier/quicker.

Behind the door that opens is your first terminal. Onto the next! 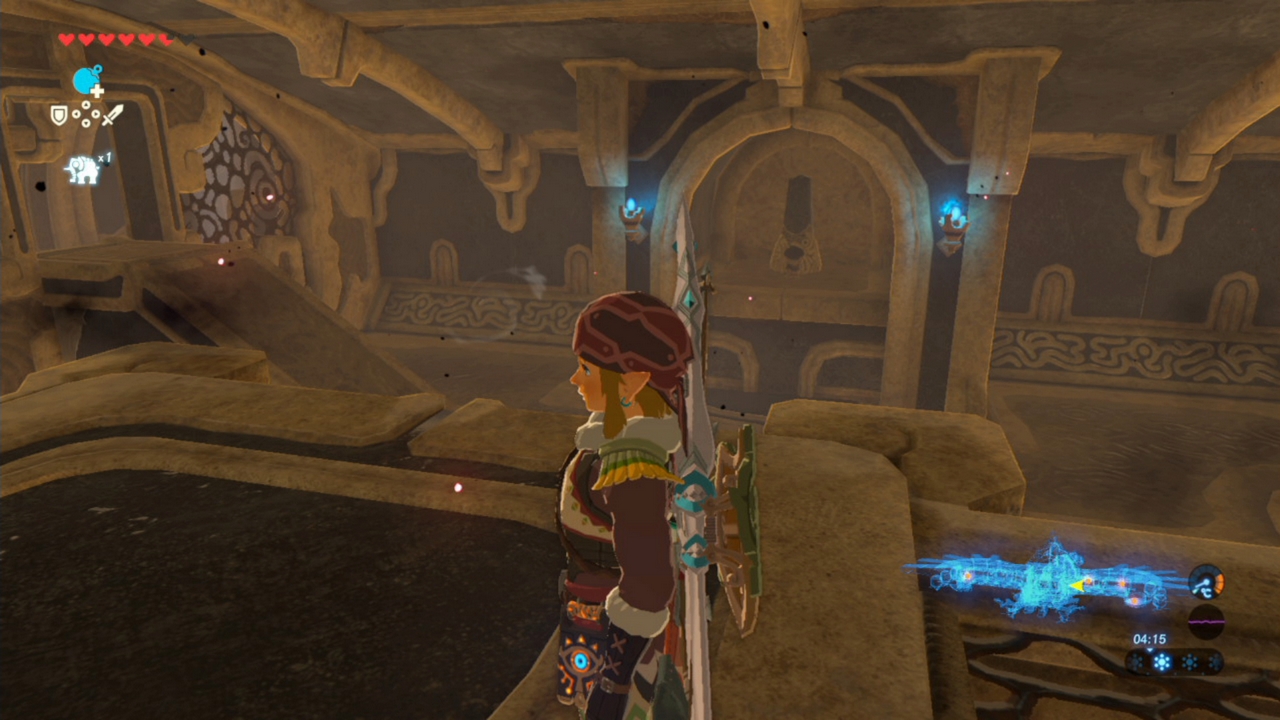 Head back to the main room. Use either stasis or bird tilting to position one of the blocks as such that you can jump onto the grill at the other side of the room.

Climb it, open the chest at the top, then shoot the eye to remove the Ganon corruption preventing access to the left wing of the beast.

Head into the left wing of Vah Medoh. Take out the eye behind the corruption with a careful shot so you can work in peace.

Hit the switch in the right corner of the room, then head up the ramp and around until you're above the current of wind. Jump and paraglide across to the second terminal. That one was easy!

In the same room as where you got the second terminal, head to the far corner where the switch is. Hit the switch and then drop a bomb through the little hole. It'll roll down (you can tilt the wings via the map screen to speed up the ball via gravity) and then hit an cracked-looking blockage. Detonate.

Repeat this again, this time winding the bomb around the path by using wing tilting (tilt the wing down, then have the open window blow the bomb across the room.

The bomb will end up at another wall you can blow to smithereens, so do that. You free a large metal ball.

Tilt the wings down to free the ball of its cage and then grab it through the window(!) with Magnesis.

Place it on the tracks the bomb was on - you can see the switch the other side of the room, right? Tilt the wings and watch the ball roll and hit it hard.

The door will open. Head right in and grab terminal three. 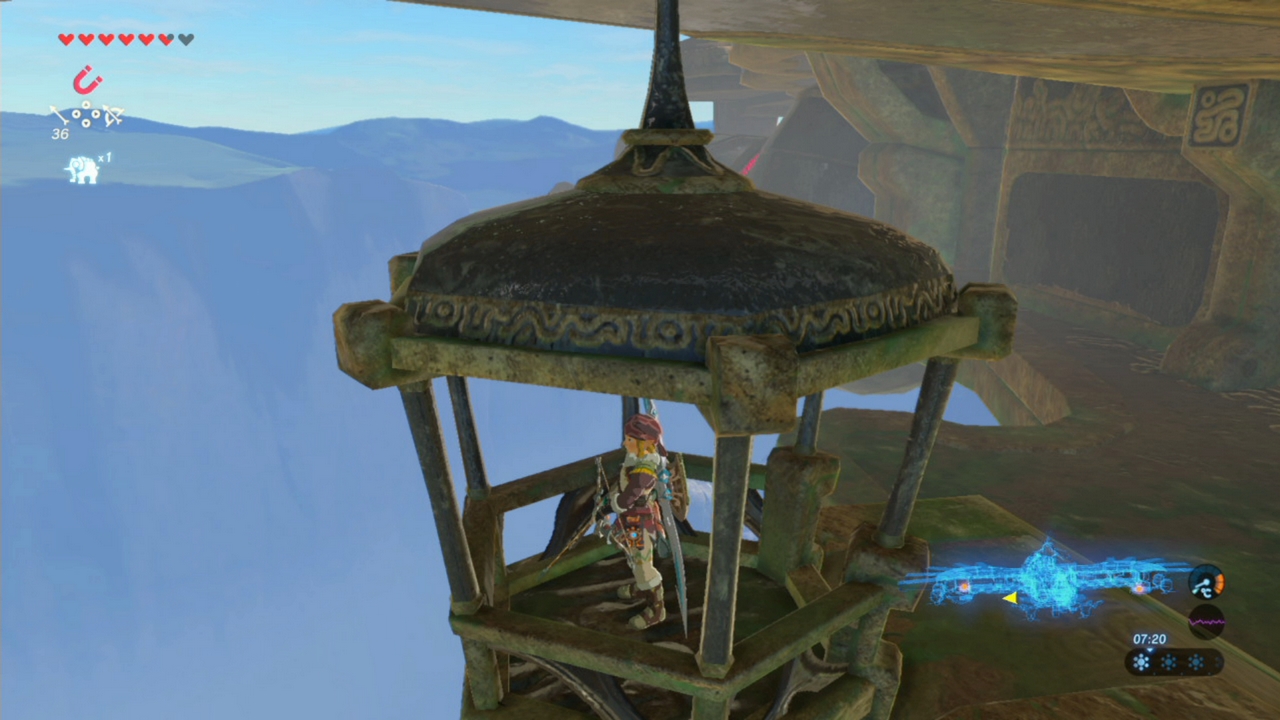 Leave this room - go back to the main hall and drop down to the lower floor. Take the one path that isn't covered in ganon's corruption out to the outside and underside of Divine Beast Vah Medoh's wings. That's... quite the drop. Don't fall.

There's a small basket right in front of you - look and notice it's on the same type of railing as all the stuff you've been moving with the wings or with stasis.

From a distance (yes, it's a tough shot) hit the eye on the corruption to clear it away, then get in the basket and tilt the wings so the basket will carry you to the other side.

Head up the stairs here... and there's a terminal right there! Terminal four is down. One to go.

Terminal five is on the other side of the underside of Divine Beast Vah Medoh from Terminal four, except where Terminal four had a lovely, simple basket to carry you across this terminal isn't so kind - it's just hanging out, and the only way to get there is some precarious gliding.

Remember a tilt of the wings will make the platform a little lower - for me this made it easier to reach.

Download Terminal 5, then prepare yourself. Glide back to safety (again, tilting the wings so that your destination is lower is handy if you're nervous) and then set the bird's wings flat again.

It's time to take back this Divine Beast. From here on the underside of the bird you'll be able to glide onto the top of its wings on an up-draft. Here you'll find the main terminal. Activate it. 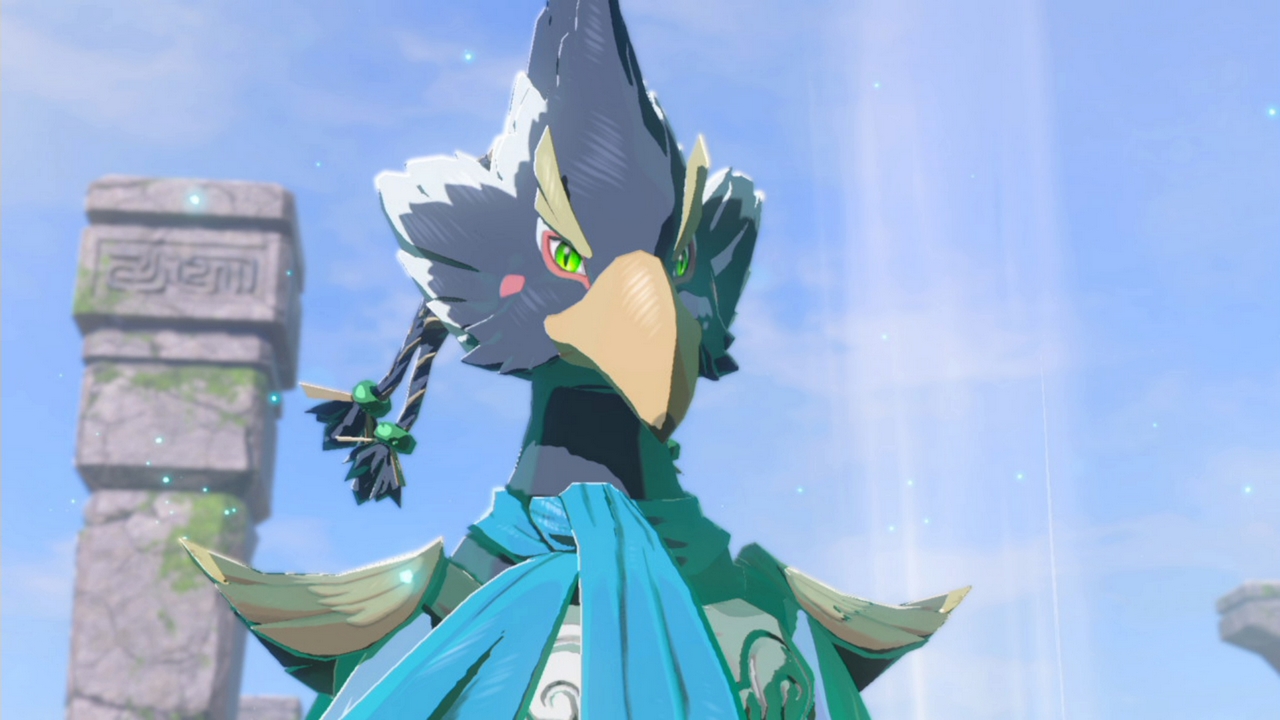 Windblight Ganon flies, and you're atop the wings of a flying beast which is all... well, it's all very appropriate. This boss warps around the battlefield and has a strong slate of both up-close and long-distance attacks.

You do have one slight advantage, however - remember how you got onto Divine Beast Vah Medoh in the first place? Fans with updrafts are scattered around Vah Medoh's wings, and if you get in one you can jump and deploy your paraglider to get high in the air.

Once you're floating, get a bead on Windblight Ganon and aim for its eye, making use of the slow-motion firing-while-mid-air bonus that you get when pulling you bow out mid-glide. Keep doing this. If you've got leftover bomb arrows from your assault on Vah Medoh earlier, now is the time to use them.

When Vah Medoh switches phases you should really pull out the big guns. The drone-like enemies it deploys to help itself can make things really hazardous, and they actively work to prevent you from using the updrafts. Focus on your most powerful tools, and if you knock Vah Medoh down waste no time in getting in there with a sword.

Don't forget to use food and elixirs to buff yourself too, especially in the second phase.

When the fight is done there'll be another lovely cutscene and you'll get Revali's Gale, a new ability that lets you perform three super-high jumps. When you've done three, the ability will take some time to recharge.

With Vah Medoh conquered, you can now consider your next destination. For story purposes we suggest heading up Death Mountain and to Goron City - or you can go ahead and explore Breath of the Wild's huge open world.