We're Goron a journey up Death Mountain for an adventure to an Abandoned Mine - but to do that we'll need Fire Resistance.

To get the Goron portion of the Free the Divine Beasts quest underway, you'll need to head to Death Mountain. Everything's about to get warm. To go up Death Mountain start at Eldin Tower and follow the path to the west and then north. Death Mountain is a classic Zelda location and it appears in Breath of the Wild in all its familiar glory - but there are slight differences this time around that'll have a significant impact on your adventures there. 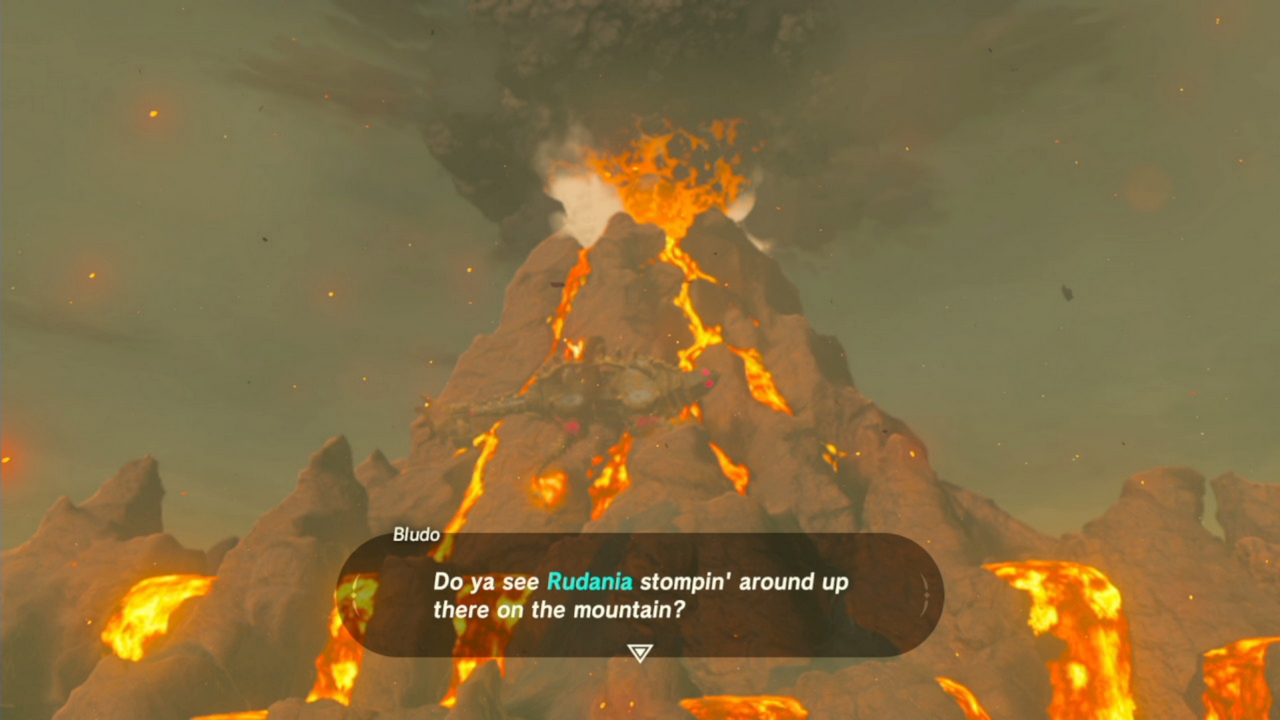 Before you go, keep in mind it gets real hot up there. You're going to need some heat-beating elixirs to put out the flames. It's important to remember that the heat-resistant effect (indicated by a Sun and a downwards arrow) isn't the buff you need for Death Mountain. You actually need Fireproof, which is a buff indicated by a flame icon on your UI.

There are a few different ways to make yourself fire resistant - there's special armor, a fireproof elixir, and fireproof lizards - but we recommend the Elixir, at least initially. That'll get you up the island so that you can then grab the necessary armor. 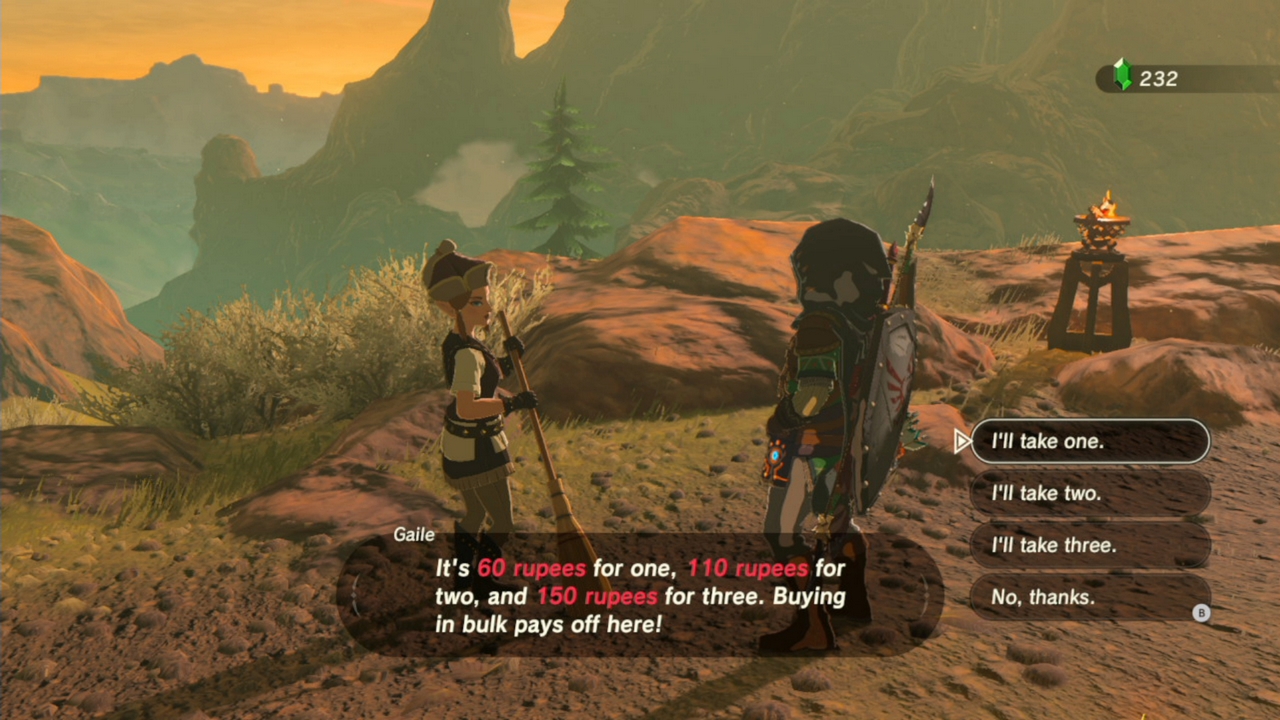 If you need access to some of these elixir and are struggling to create them, head to the Foothill Stable, just down the road to the south of Eldin Tower and next door to the Mo'a Keet Shrine.

There an NPC named Gaile (she's usually carrying a broom) will sell you some: one for 60 rupees, two for 110 rupees and three for 150 rupees. Buy three.

When ready, start heading up the path to Death Mountain. You'll pass through the Southern Mine, then Goron City. Head past Goron City a little way to find the Shae Mo'sah Shrine. It's worth at least activating (if not completing) this so you have a warp point. Once you're in Goron City, you can head to the shop and find the Firebreaker Armor Set for sale. Two pieces of this armor set will give you sufficient fire protection - removing the need for further Elixirs.

Head back down into the city and talk to Bludo - the older, bearded Goron. He'll give you a new objective - a younger Goron called Yunobo has a history of doing battle with Divine Beast Vah Rudania, and he's gone missing after heading to the Abandoned North Mine.

Looks like we need to help out... so let's step to it. 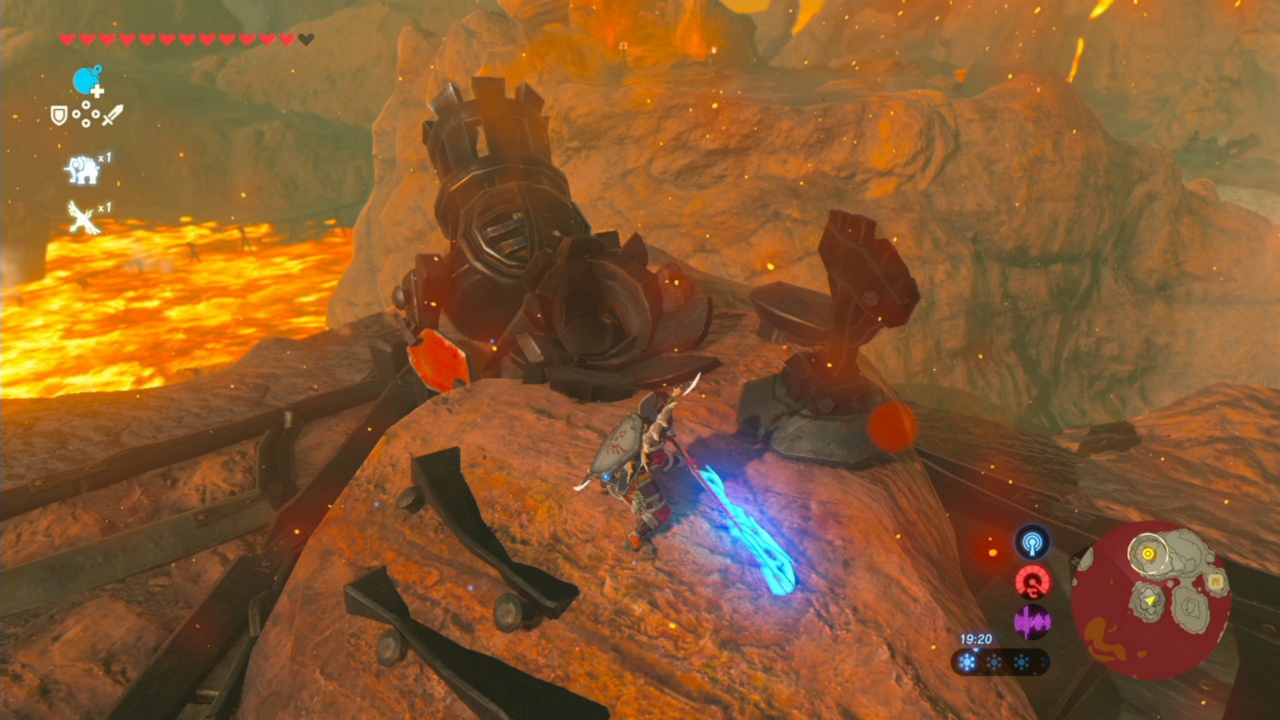 The Abandoned Mine is even hotter than Goron City, and so in order to survive there you're going to need two layers of protection.

The easiest way to get this protection is a combination of Fireproof Elixir (available for purchase from Gaile at the Foothill Stable next to Mo'a Keet Shrine) and a piece of the Goron-made Flamebreaker armor set. If you've got the cash you could always buy two parts of the flamebreaker set - that'll be enough protection for you to walk around up there.

Head up the hill out of the city, past the Shae Mo'sah Shrine. Follow the path towards the Abandoned Mine. Oh, and - if those Octorocs with rocks on their head give you trouble, here's a tip: stasis will beat their fast reflexes.

When you reach the Abandoned Mine chat to the Goron at the entrance. Beyond him, there are a lot of enemies with fire arrows - they're tough.

Here's the key here - Ice arrows are your friend in a big, big way. Anything ice, in fact - melee weapons too - will one-shot the enemies here by freezing them to death. The volcano's heat will then make them shatter. That's the way to go.

One way you can take our enemies in the abandoned mine is using the cannons scattered about. The way these work is pretty simple - drop a circular bomb into the hole to act as a fuse, and detonate to fire. The switch on the right of the cannon can be hit with weapons to make each cannon switch between two positions. 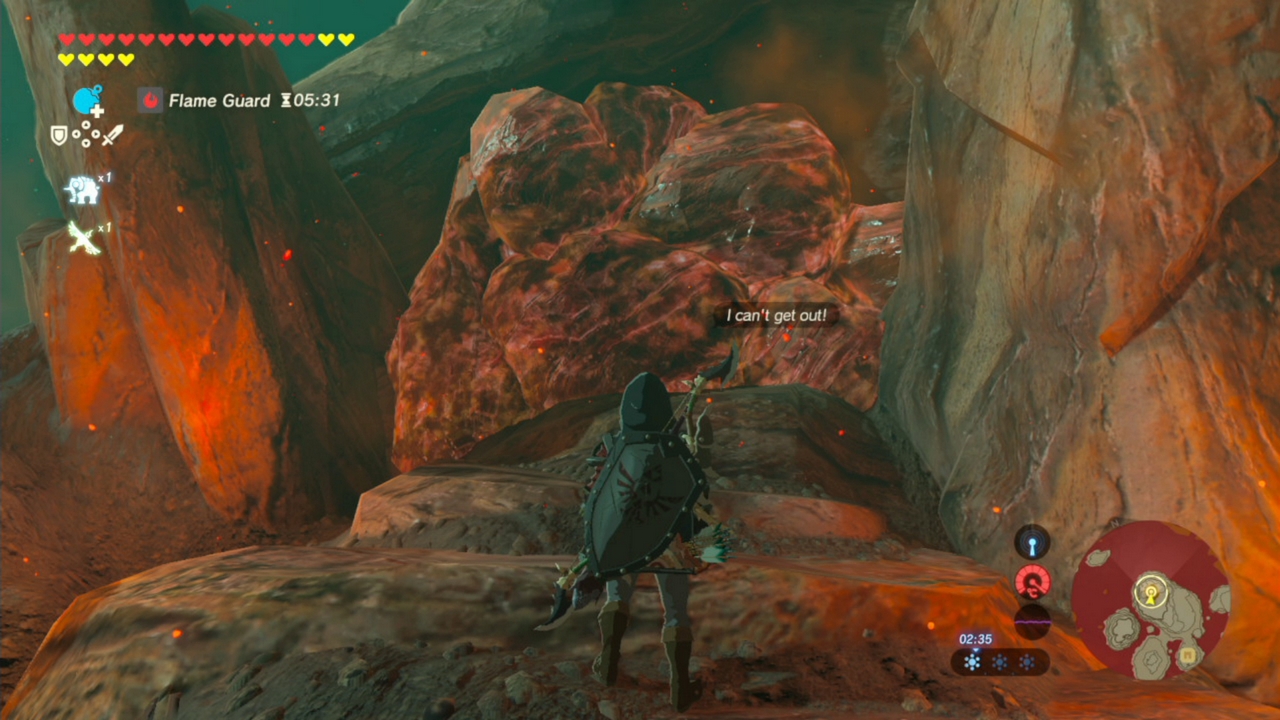 Any bright red rocks in this area can be shot and destroyed with the cannon. Some have loot underneath them, while the main one atop the hill is your objective. Yunobo has gotten trapped inside a mountain at a peak - the tallest place in the mine, obvious to find - and you'll have to blast the red rocks away.

Several of the red rock deposits including the one trapping Yunobo will require you to detonate a cannon's fuse when it's mid-way between turning between positions, so look and aim carefully. If you want the optional loot be sure to check out every cannon, as each has a use.

When you rescue Yunobo he's very grateful. The next step is to return to Goron City and the boss - there the boss will remind you of the Goron's champion and push you onto the next phase of the quest: go meet Yunobo at the Bridge of Eldin.

Fight your way up the hill. Remember my tip about using stasis on Octoroks. When you reach Yunobo he's surrounded - beat them to a pulp. Once that's done, Link will be able to explain his plan.

Yunobo hops in the cannon. Put a bomb in, move the cannon, detonate... the Bridge of Eldin will lower. It's time to board Vah Rudania. Prepare yourself for... well... some stealth. Uh-oh.