It wouldn't be the Wild West without some spectacular gunplay and shiny new weapons.

There are 59 weapons to be found and used in Red Dead Redemption 2, with some being easier to unlock than others.

Weapons fall into three categories, which include standard weapons you are given during the story or that can be bought from a Gunsmith in any major town. You can also find Rare versions of these standard weapons throughout the story campaign and world.

Unique weapons that can be found by following treasure hunts, killing gunslingers or completing other side missions.

And then there are a few extra weapons that can be unlocked by pre-ordering Red Dead Redemption 2, or by playing GTA Online, including the double-action revolver and the stone hatchet. 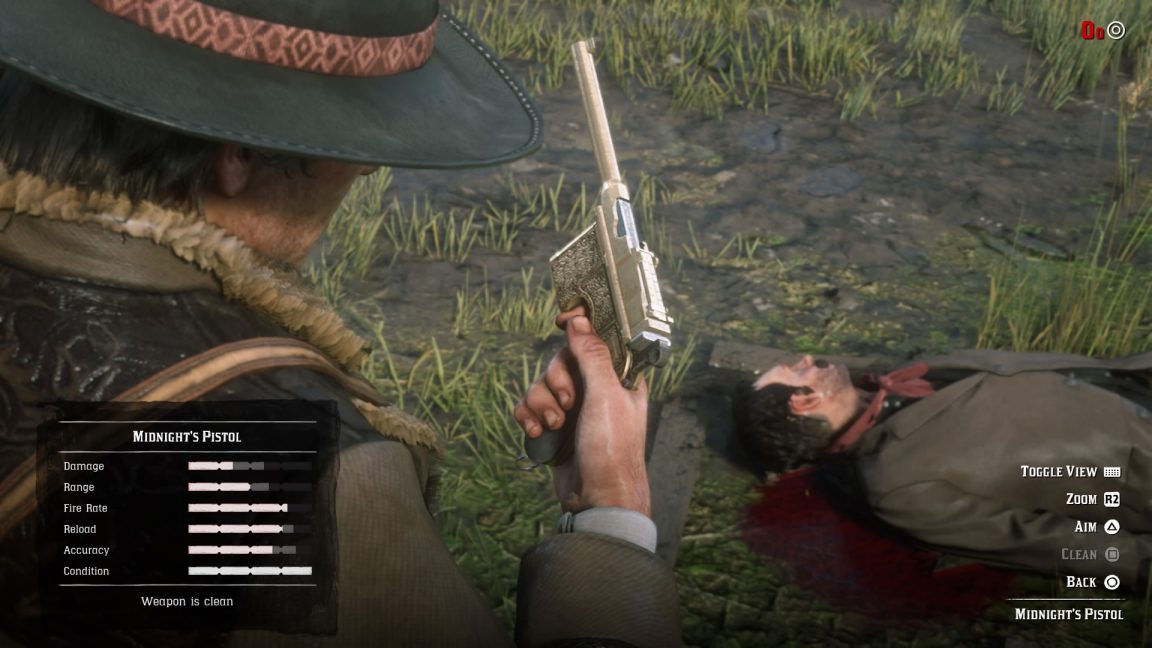 All weapons can be deadly if you're a good shot, using Dead-Eye correctly or just getting up close and personal. But if you don't look after your weapons their performance will decrease significantly, even for Unique weapons. You need to keep a healthy stock of Gun Oil, which you can buy from a Gunsmith or find by looting dead enemies. Whenever you get a little downtime, be sure to clean your guns.

Buy the Upgraded Holster from a Gunsmith as soon as you can it will slow down the degradation of all weapons by 20%.

Head to the Gunsmith and select Customize from the menu. You can now swap out the Components: barrel, scope, iron sights, stock and wrap. With pretty much every weapon, adding a new scope, longer barrel, iron sights or stock will improve its range and handling. Whenever you get the chance you should mod these. The wrap will just change the look of the weapon and not any actual stats.

How to holster and pick up weapons

If you're walking around a peaceful neighbourhood with weapons drawn you'll attract the wrong type of attention and get funny looks, which can affect your Honor rating. It also increases the chances of accidentally firing your gun when you only meant to say howdy to an old lady. Holster your weapon by tapping the left bumper (LB/L1). If you see a weapon on a body that you want to pick up just hold down the right bumper (RB/R1) and you'll swap it for the one you currently have in your hands. Be careful with this as you can end up leaving behind one of your favourite or customized weapons.

To carry more ammo, buy the Upgraded Bandolier and the Upgraded Gunbelt from the Gunsmith as soon as you're able, or complete challenges and get reinforced gear from the Trapper.

Best revolver
There are three revolvers to choose from. The $84 Schofield Revolver is the best, dealing decent damage and it has good accuracy and fire rate.

Alternatively, you can rob the Doctor's shop in Valentine. You will need to peer through the back window first in order to gain the ability to rob the place. Once inside, force the doc to take you to the back room, kill everyone, and loot the box on the table. You can Customise it to improve it and you've got a good early game firearm. Get a second one as soon as you're able to dual wield.

The Volcanic Pistol does the most damage and it's the cheapest at $150. The Semi-Automatic is best for fire rate and reloading, and the Mauser holds a lot of bullets and spits them out quickly.

It's a toss up between the Springfield Rifle and the Bold Action Rifle. But both are slow. The Bolt Action is a little more accurate and the Springfield does slightly more damage. Alternatively, the Lichefield Rifle is the best repeating rifle you can pick up for $145 if you're using a rifle as your main weapon.

The Repeating Shotgun does the most damage, but the sawn-off can be dual-wielded so get both.

The Carcano Rifle is the best sniper rifle so go for that. It has great range, will bring down an elephant and is pin-point accurate.

The Tomahawk is a brutal weapon that can kill with one throw at close range, and should be used for silent attacks. Just remember to pick it up again.

Even better, once you get to Saint Denis you can purchase the Homing Tomahawk Pamphlet from the fence. It might not be authentic, but attaching an owl feather to the regular tomahawk now makes it more likely to hit the target when thrown.

All Unique and Rare weapons

If you take on the Gunslinger side quests, you'll hunt down an old shootist called Billy Midnight. Kill him and you can take his rare Mauser Pistol, complete with gold engravings. It has a great fire rate, reload and accuracy. Although its damage is average, it's a good early-game gun and fairly easy to earn.

Another weapon you find by completing the Gunslinger side quests, this pistol isn't amazing but it's a nice replacement in the early game for your rusty old shootin' iron. Kill Flaco Hernandez and it's yours - he ain't gonna need it anymore.

Another weapon picked up after killing the gunslinger Emmet Granger. It has a beautiful pearl handle but isn't as good as Flaco's Revolver.

This is the final revolver you'll pick up by completing the Gunslingers side-quest. Don't forget to loot it after you've killed the final gunslinger. It's engraved with Canis Cane Edit, a nice little nod to Rockstar's open-world school caper, Bully.

This pearl-handled beauty is your reward for completing all the tasks in the Dutchesses and Other Animals challenge which tasks you with tracking down exotic items for a chap called Algernon Wasp. You won't meet him until Chapter 4 when he can be found in Saint Denis. Algernon's Revolver has an amazing rate of fire.

Here's how to unlock the Stone Hatchet by completing challenges in GTA Online.

This is a special revolver you can earn by completing headshot challenges in GTA Online.

This is a great sniper rifle that you earn during the end of the Magicians for Sport story mission. One of the guys who has kidnapped your friend will be carrying it so make sure you search all the dead bodies.

There's a cave on the far west of the map, north west of Big Valley, or west of Hanging Dog Ranch. Inside you'll find the mysterious hermit who wields this Rare Shotgun. It doesn't seem to be any more powerful than the regular double-barreled shotgun, but it looks amazing.

You'll have to kill a man for this one. Open up your map and set your waypoint below the letter "a" in Manito Glade. In this area, you will find a settler's home in the woods, and he's packing the Rare Double-Barrel Shotgun. Kill him and it's yours. Just be sure to loot him, otherwise, you won't collect it later in the game. The weapon is rather decorative, has a two-round capacity and can use a variety of shotgun ammo.

Hunter Hatchet
South of the "k" in Window Rock and north of the tracks in the Grizzlies, you will see a building. Go to the right of it, and embedded in a tree stump you will find the Hunter Hatchet. It features a long-bearded axe which allows for greater control when planing or shaving wood.

A melee and throwing weapon, the Viking Hatchet features really neat handle bound in leather with Nordic patterns. Here's a guide to getting the Viking axe and Viking helmet so you can strut around looking completely out of time.

This goes with the pirate hat, and we have a full guide to finding the pirate sword here. It's a knackered looking thing, but it's pretty lethal in a close-up fight.

Dead Eye targeting is the ability to slow down time and pick off enemies with specific shots to the head and other critical body parts. We have a full guide and tips to using Dead Eye for those that want to master it.

If you want to get rich quick, find a fence or want to know where to hunt legendary animals, then check out our complete Red Dead Redemption 2 guide here.