The Galar region is expanding with the new Pokemon Sword & Shield Expansion Pass, new DLC adding the new Isle of Armor and the Crown Tundra areas.

While Pokemon Sword & Shield had its shortcomings, it was still in many ways the most ambitious Pokemon game ever released. In many ways, those shortcomings whiffed of a game that was perhaps pushed out of the door with a little haste in order to meet a certain release date. That might have been true - we'll likely never know - but regardless we're now getting a bunch of additions to the game as DLC that are really going to help to fill it out - be that in terms of new zones to explore, previously missing Pokemon to catch, even more all-new Pokemon and a continuation of the story of Sword and Shield. With that said, being Pokemon, this stuff is never strictly straightforward - so here's what you need to know.

Okay, here's perhaps the most important single piece of information about the upcoming Sword & Shield DLC, so let's get it out of the way up top: the DLC will release in two parts, the first in June 2020 and the latter at some point in Autumn 2020.

We'll talk more about the way the DLC is split in the next few headings, but just know that the Isle of Armor is the first new area, and will be available in June 2020. Then the Crown Tundra will release later on. The two DLCs offer two different areas with unique focuses and a variety of different Pokemon to catch.

The DLC is available for pre-purchase from the Nintendo eShop right now, and costs $29.99 / £26.99 for the pair. Because the two pieces of DLC content come as a sort of pair and directly relate to each other, it won't be possible to buy just one of the two. It's all or nothing!

There's some confusion going around here because a Nintendo announcement mentioned the DLC being "$29.99 each" - but this refers to the slightly different versions of the DLC, as there'll be one expansion pass for Sword and one for Shield. If you own both games, you'd have to buy both at $29.99 each to access the new DLC content for both games. If you just have one game, it'll cost you one round of $29.99.

Where do the Expansion Pass DLCs fit into the Sword & Shield story?

This is perhaps one of the most interesting and exciting things about the Pokemon Sword & Shield DLC that's releasing as part of the expansion pass - they slot in pretty much anywhere in the story. That means the DLC will be ready to give you a new challenge if you're already in the post-game, but even those starting out Sword & Shield for the first time will find they can jump into the DLC from early on.

Specifically, you'll be able to head off to the Isle of Armor in June 2020 on any save file that has accessed the Wild Area - which happens very early in the game, no more than a few hours in even if you're taking your time. From there, you'll be able to go back and forth with the original game's content and the new DLC stuff.

Here's the hottest news of the day for hardcore fans - the DLC will usher in the return of a bunch of older Pokemon that haven't yet appeared in the Galar Region and thus were absent from Pokemon Sword & Shield thanks to the decision to not include the national Pokedex in the game.

Pokemon you'll be able to catch in thanks to these additions include the likes of Garchomp, Chansey, Magnezone, Horsea, Volcarona, Nidoran, Beldum and Crobat, just to name a few. In all, 200 classic Pokemon will make their return in the two DLCs that make up the expansion pack, with when each Pokemon shows up determined by where it'll more naturally fit in to the new areas - some will appear on the Isle of Armor, while others will show up in the Crown Tundra. There will also be some version exclusive differences between Sword & Shield, as always.

Oh, and a good chunk of the 200 newly added Pokemon are legendary Pokemon from past titles - practically every classic legendary can be caught in the new zones of the DLC, be it through Wild Area style raid battles or through other means.

If you don't want to buy the DLC, a free update is coming to the game, too. This free downloadable update will allow players to transfer in the 200 newly-added from other sources like Pokemon Go and the soon-to-launch Pokemon Home, which will let you bring in Pokemon from other past console titles if you so wish.

New areas bring with them new Pokemon, of course, as is series tradition. Even though this is the first ever DLC expansion in the history of the series, it's also adding new Pokemon as if it were any other new game. These New Pokemon will take a few different forms - some are all-new Pokemon, while others are new forms of old favourites. Here's the ones we know about so far: 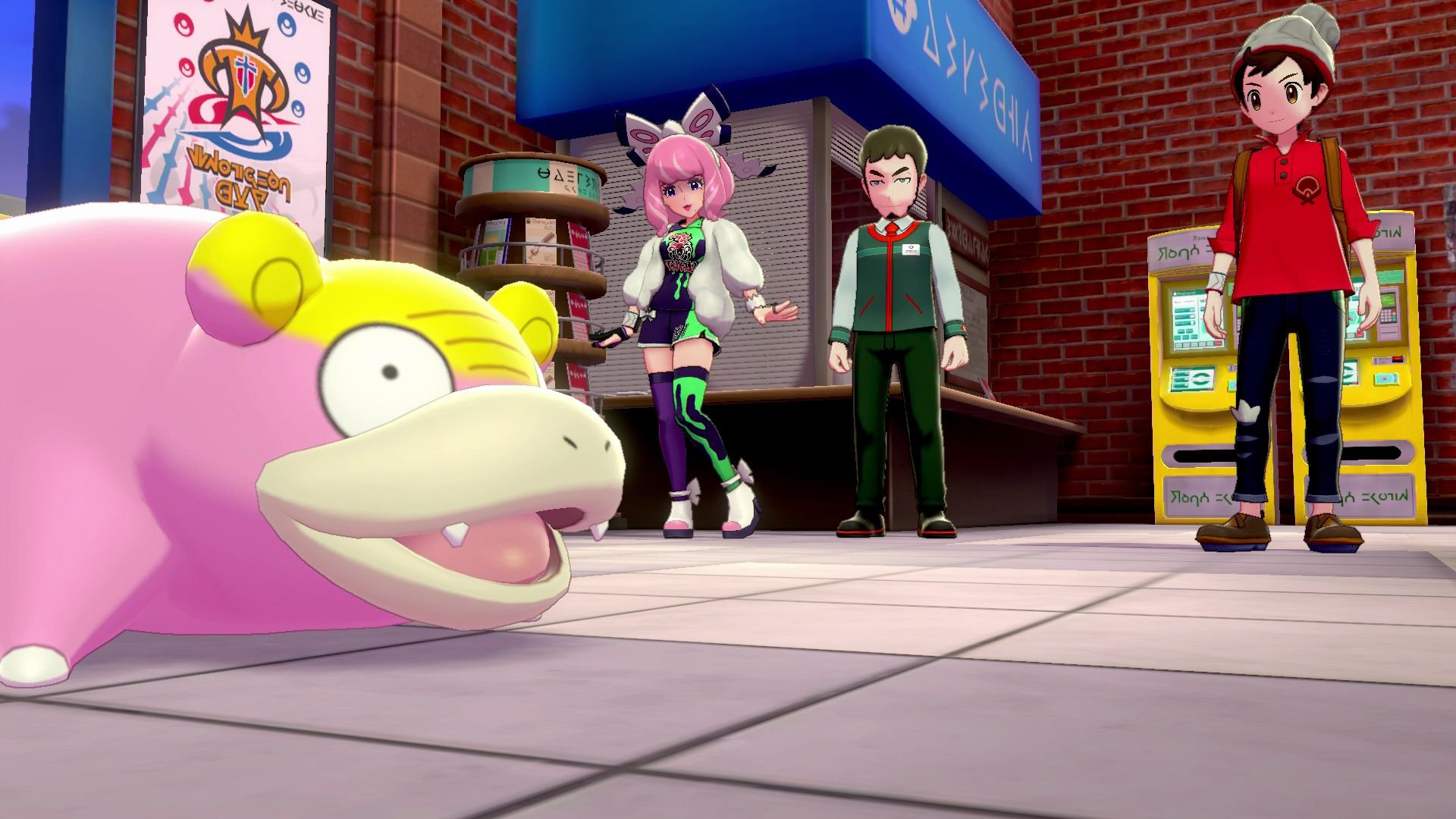 We got a few all-new Galarian forms in Pokemon Sword & Shield, and here's another to add to the list - a new regional variant of old favorite Slowpoke. Galarian Slowpoke will appear as part of the DLC, and is actually found in an encounter in the game now thanks to an update as a little tease for DLC - just visit Wedgehurst Station and chat to the new character there for a chance to catch one before the DLC releases.

Galarian Slowpoke can evolve into Galarian Slowbro using an item that can only be found in the DLC Isle of Armor region, out in June, while you can also evolve it into Galarian Slowking with an item (you guessed it) only available in the Cloud Tundra, out in the Autumn. 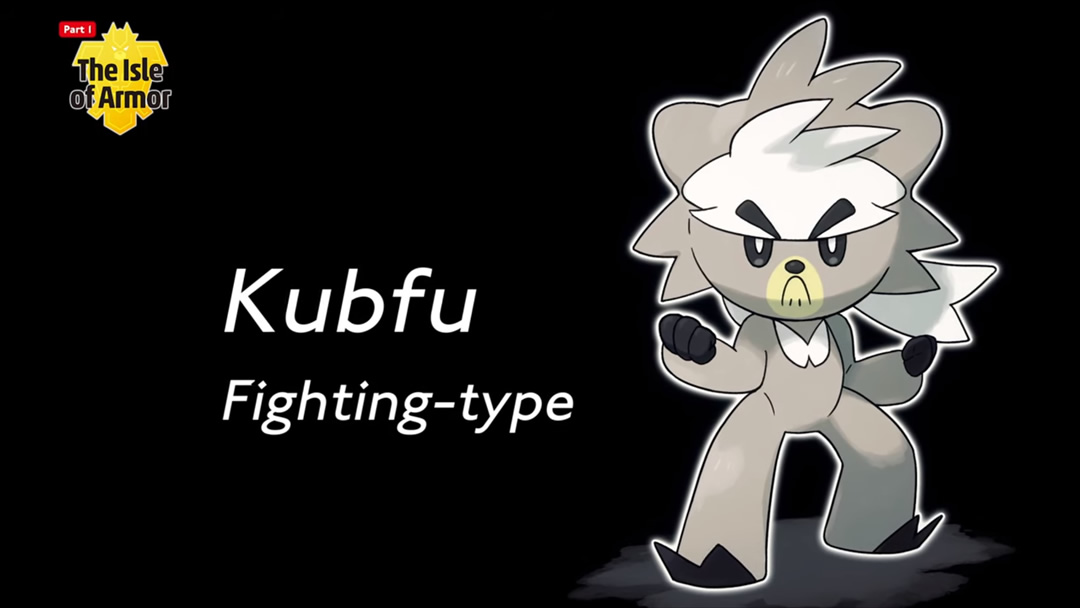 Kubfu, the new Wushu Pokemon found on the Isle of Armor

Kubfu is an all-new Pokemon found on the Isle of Armor. Interestingly, the official description says that this Pokemon isn't from the Galar region, and is in fact from "a faraway land"... which, with the mention of Wushu and its martial arts styling calls to mind China. Perhaps the next new Pokemon generation will take place in a land based on China, just as Galar is based on the United Kingdom?

Anyway, Kubfu is a new fighting-type Pokemon that you'll be able to meet and catch on the Isle of Armor. Here's the official description:

"A serious Pokémon dedicated to its training: This Pokémon is hardworking and strives to train both its body and mind. It uses each defeat as motivation, training itself with even more vigor after a loss in order to grow stronger. It has an organ that produces “fighting energy” in its lower abdomen, and before heading into battle, it will increase this energy through unique breathing techniques and intense focus. Wild Kubfu live in mountainous areas far away from the Galar region today, but it was once a species that called Galar its home. It’s noted in historical texts that this species used to head to uncharted lands with people as they set out to trade or explore. Records suggest that the Kubfu living in faraway mountains today may have descended from Kubfu that became naturalized to the distant lands they visited in their journeys." 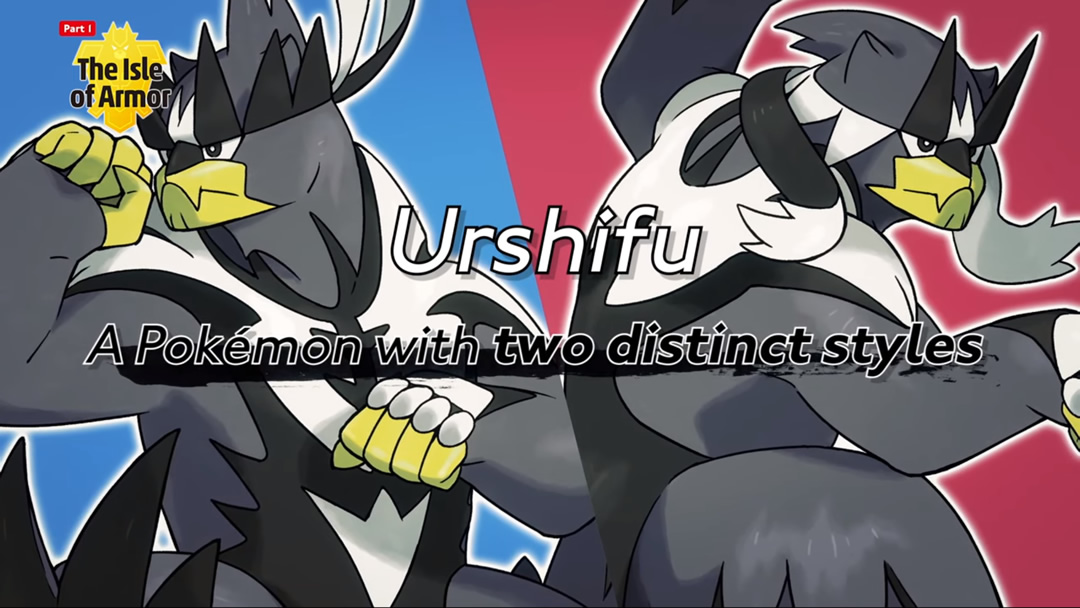 Urshifu, the evolution of Kubfu

After starting out with a typically cute first form, Kubfu evolves into this martial artist that has two forms - the Single Strike form and the Rapid Strike form. Rather than somehow being able to switch forms, which form of Urshifu that you get from evolution will depend on choices you make on the Isle of Armor adventure with your Kubfu. There's a Gigantamax version of both forms, too. Here's all about the two versions: 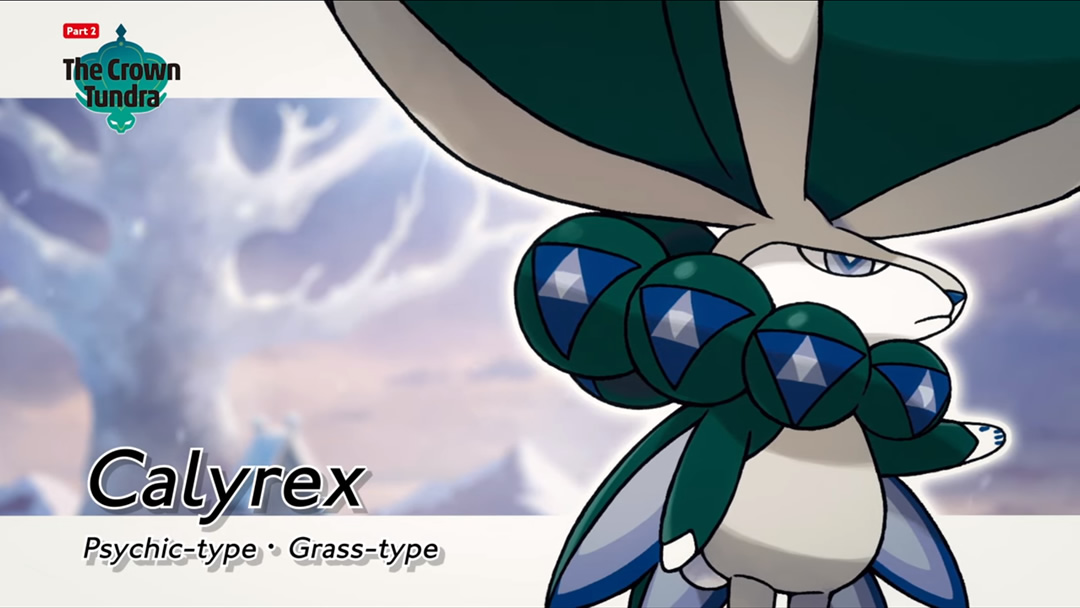 There's a new plot of sorts in these new DLC areas as part of the expansion pass, and in part two, The Crown Tundra, you'll ultimately be hunting down Calyrex, a new legendary Pokemon for the expansion pass. Calyrex is even the mascot Pokemon of this expansion, and will appear on the imagery advertising the expansion.

"This Pokémon ruled all of Galar in ancient times. Though it appears delicate and slight, its every move is filled with grace and dignity. It also has extremely high intelligence, and it’s said to see every past, present, and future event." 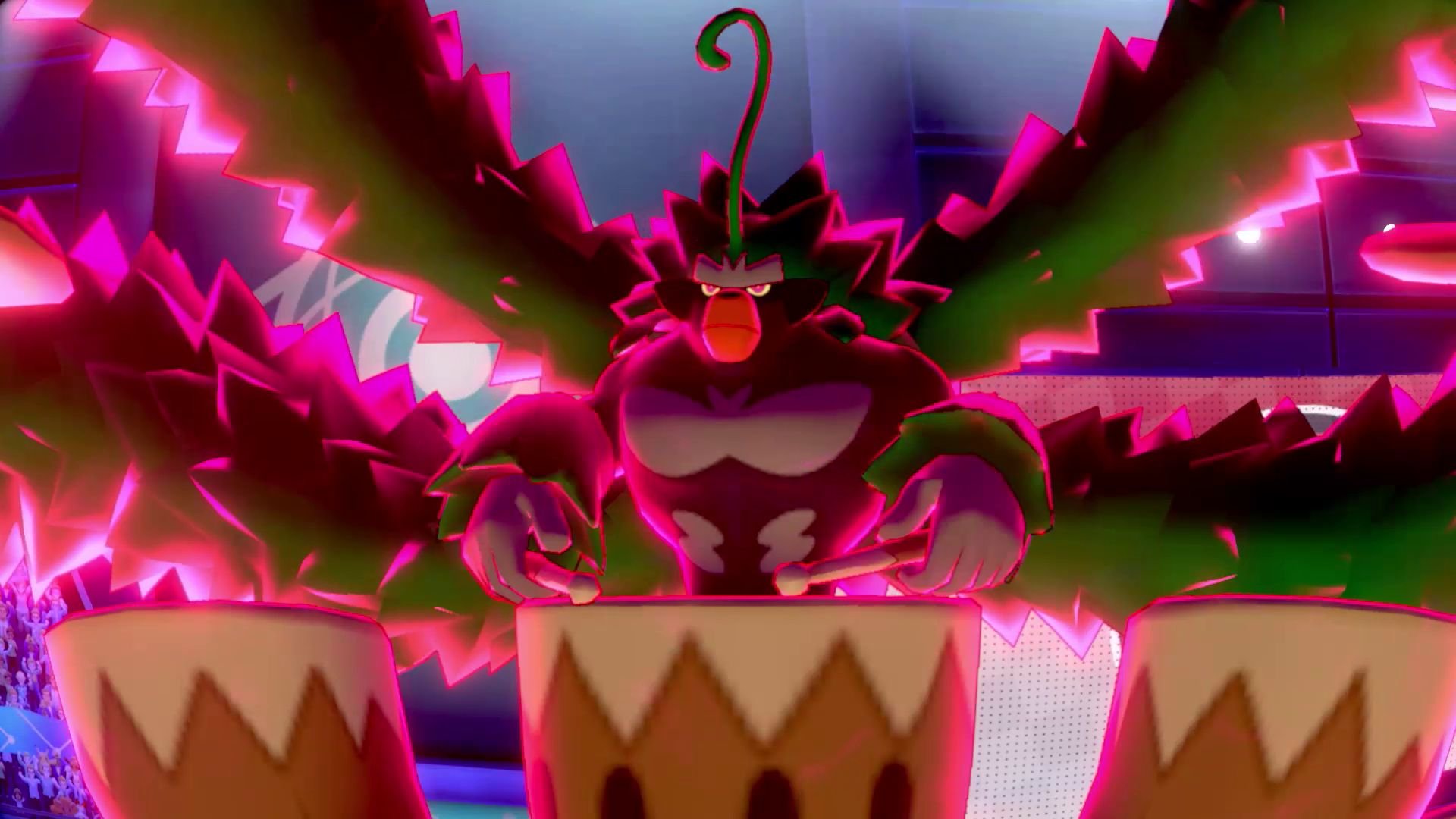 In addition to all of the above, the expansion pass DLC will also bring with it new forms for some of your favorite Pokemon in the game. If you ever thought it was weird you could only Dynamax your starter Pokemon's final evolution and not Gigantamax it, it's weird no longer - Rillaboom, Cinderace and Inteleon will all get Gigantamax forms. Here's all about those three new forms:

In addition to these three, other Pokemon will also get Gigantamax forms - though we're not sure of a full list yet. This includes some of the new additions to the Galarian Pokedex for the DLC, however - so we already know that Blastoise and Venusaur, available in Galar for the first time via this DLC, will have Gigantamax forms. 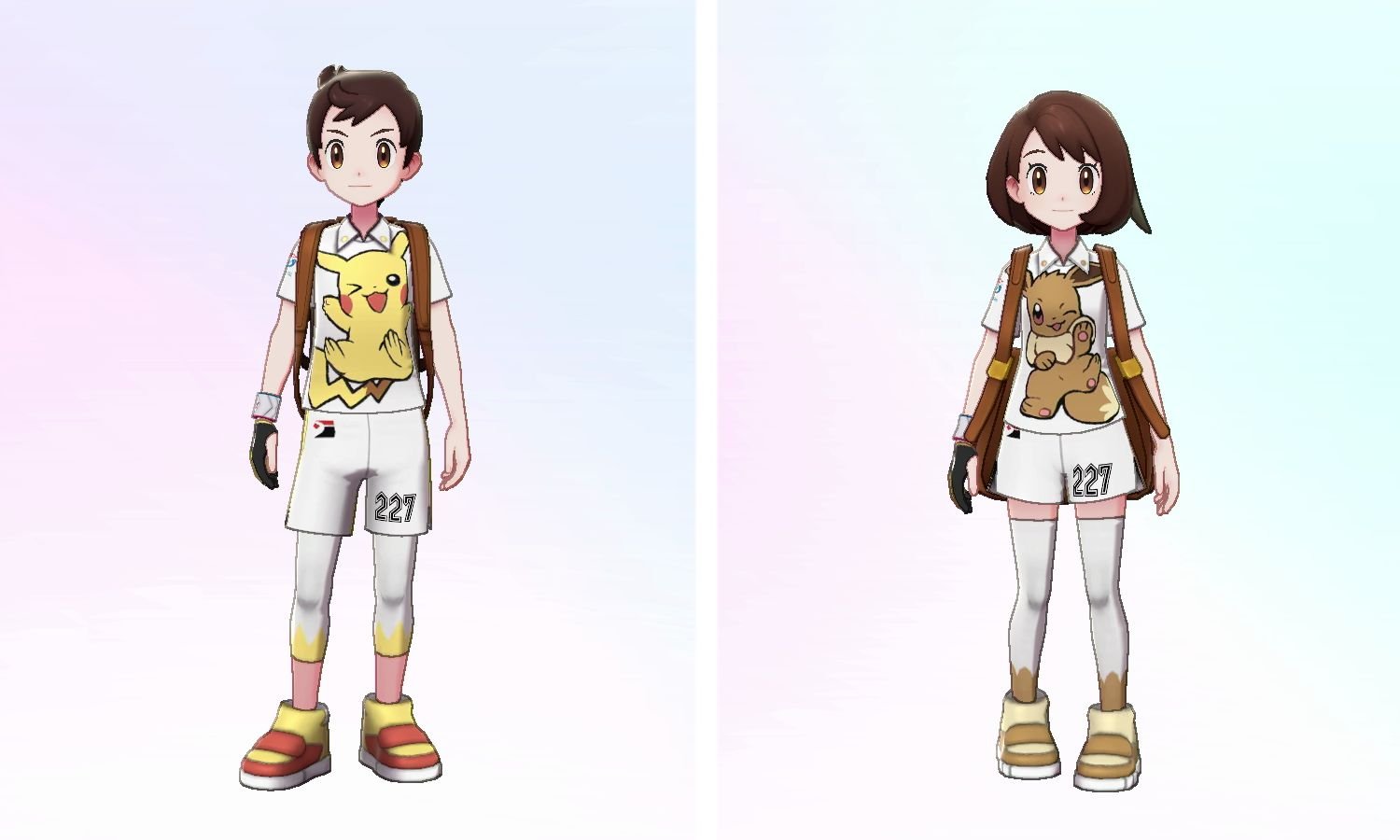 On top of everything else - the really important stuff like new Pokemon - the expansion pass will also bring with it a range of other additions. There'll be new characters in both expansions, and the characters you meet will differ slightly from version to version, just as with Pokemon themselves - so a Shield player will have a slightly different expansion experience to a Sword player.

As well as new characters, a bunch of new clothing items will be added, adding hundreds of new potential combinations to dress up your trainer.