Let us simply say that it’d be profoundly meta if there was any reason to pay attention to the world building but, alas, the real reason we are here is to get our Battle Royale murder-times a-rolling in the lavish city of Neo-Arcadia. And as we’ll see, there really is some literal rolling.

Step with me now through the glowing hexagon portal and we shall survey the landscape of Hyper Scape. It is, as you are probably already aware, Ubisoft’s big budget free-to-play Battle Royale, intended to compete with the Apexes and Fortnites of this world. And I can tell you that it does compete, at least from what initial chaotic forays into its vast city map can tell us.

The game (of what they call “Crown Rush”, which is a trios mode) begins with the now-traditional leaping, emoting, and waiting phase in a lobby above the virtual metropolis (one lobby at each corner of the map, just to mix up the formula). You will notice at this point (or possibly earlier, in the tutorial or cosmetics rooms) that this is a game of mantling and double jumping. You are expected to leap up the side of quite tall buildings, and you will, because there is no fall damage.

Once the population arrives, we plunge directly from our lobby into the city in some kind of pilotable pod thing (replacing parachutes or gliders) which then dematerialises before we hit the enormous city below. It’s worth mentioning that there is a great deal of dematerialising in Hyper Scape, because, as we said, it is a simulation, which means everything is in some way made of triangles, including you, your weapons, the environment, and especially windows, for some reason. Anyway, assuming you make it to the ground alive, then it’s time to enjoy the next phase of Battle Royale: racing about inside multi-storey buildings in search of the things. 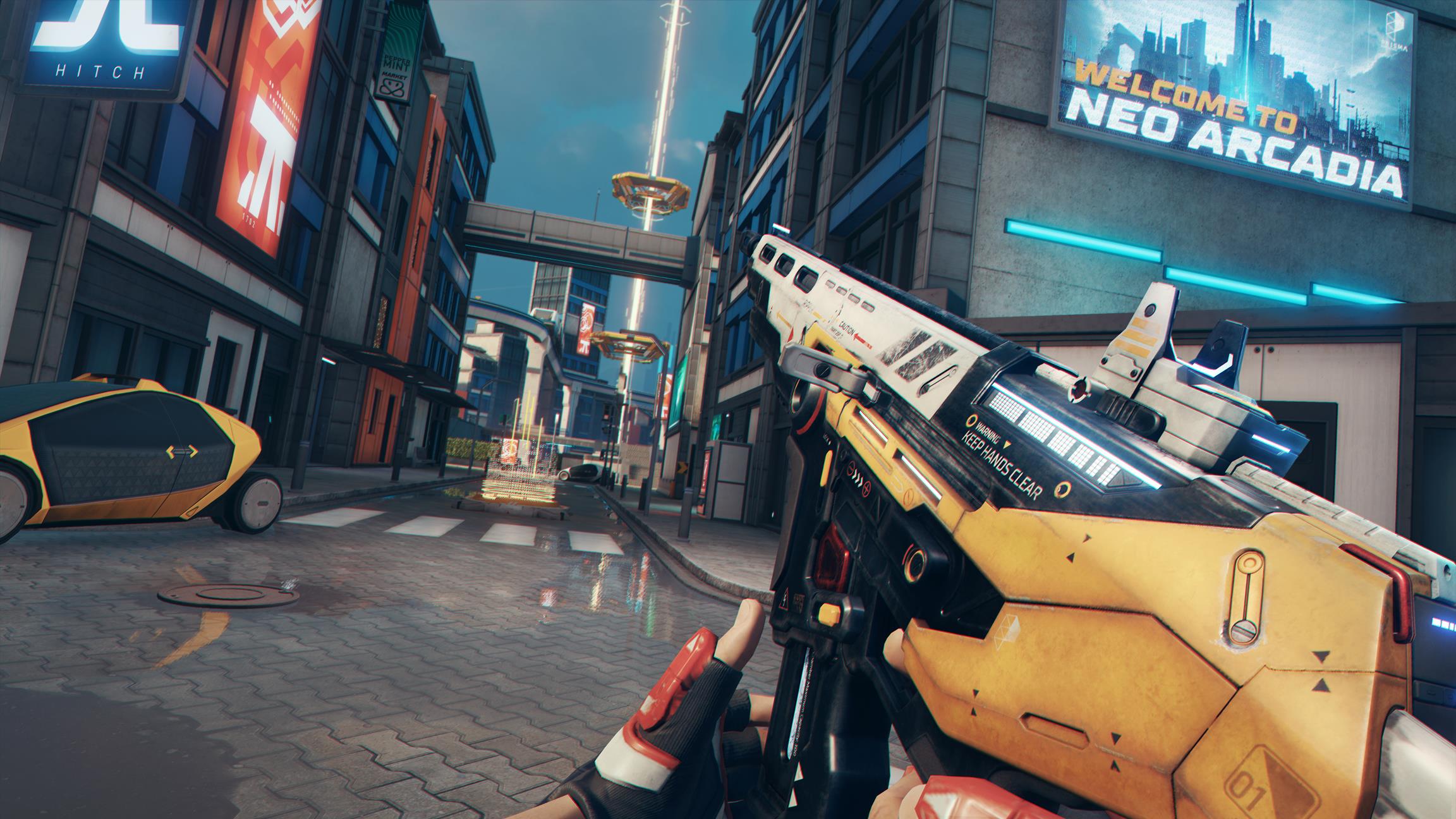 It won’t surprise you to learn that many of the things inside Hyper Scape’s excellent buildings are guns. And not even guns of different colours, but simply other guns. This is the first of Hyper Scape’s innovations (and its answer to campy approaches to play), which is that you must upgrade your gun by finding another copy of it. Want to be able to win a fight? Sure you do, and that means finding more guns. Not the best guns, but just more guns. It’s one of those simple design ideas that seems so obvious, and I like it a lot. A “fused” version of your gun is always better than the basic one you picked up, so your search will need to continue to make that happen.

Just to give you an idea of the guns: these cover a range of shooting possibilities such as sniping, spraying with automatic pistols and rifles, shotgunnning, as well as a bouncy grenade thing and two different magnitudes of plasma-blasting. One of those is a huge AoE cannon thing which I have so far been spammed to hell with so often that I am no longer amused by its existence. All of these are improved by “fusing” them with copies of themselves.

(As a relevant side note: the default melee weapon, which is a baton, but can obviously be swapped out for more exciting cosmetics, is by default relegated to a “quick melee” once you picked up a weapon, and I couldn’t select it when I ran out of ammo, which seems like an odd choice?) 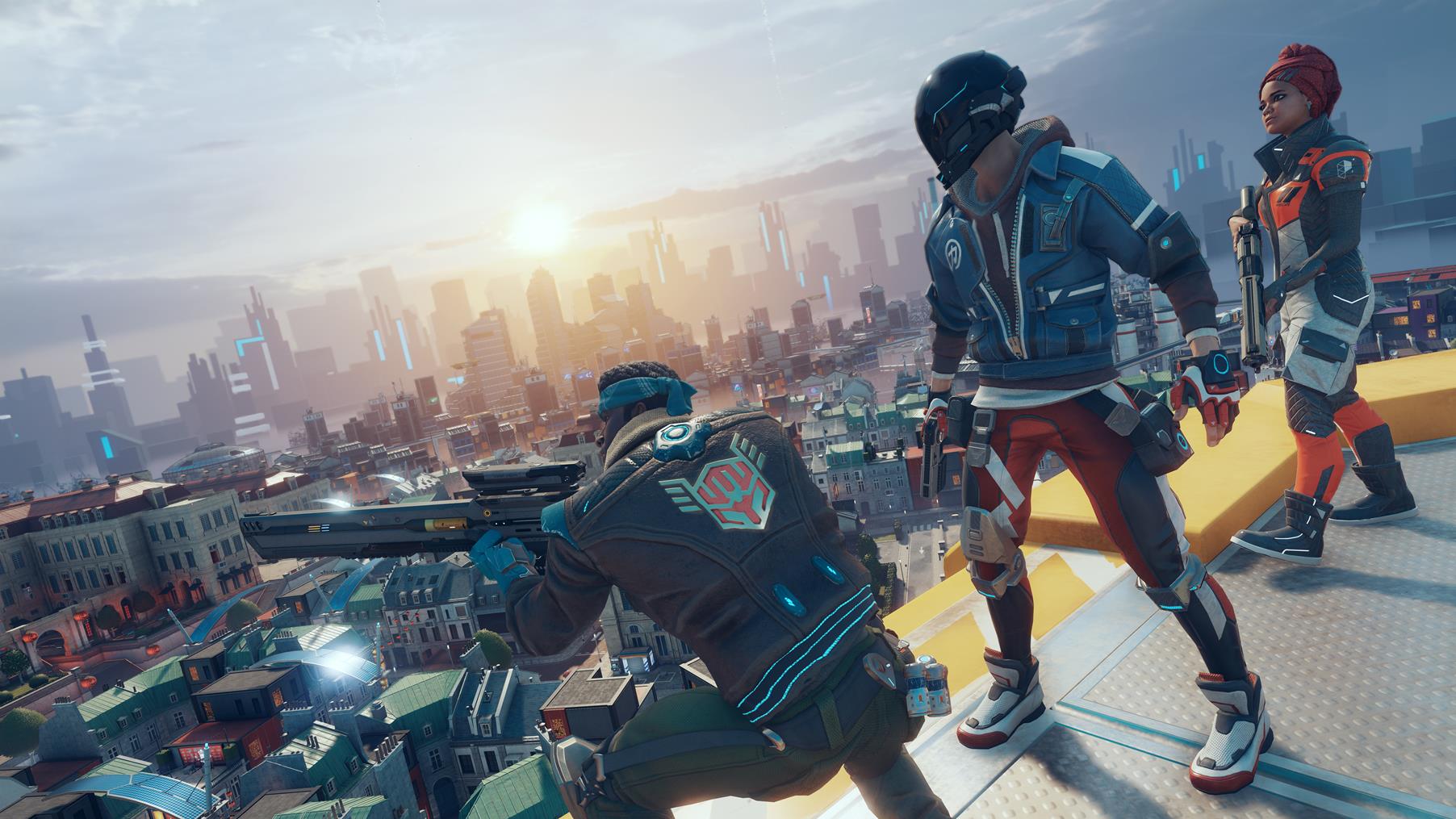 But there are not just guns in here, no indeed. What sort of shooting game would this be if there were just guns? A different one, that’s what. In Hyper Scape there are also abilities called Hacks, and you can carry two of these. Hacks include a healing circle, for healing, invisibility, for not being seen, an area of effect blast, for blasting things within an area of effect, a wall for blocking incoming fire, a neat “slam” thing which throws you into the ground from a jump with damage effect on enemies, and some armour. You will be familiar with the concept of armour, I feel certain.

One of the “hacks”, however, is a large metal ball.

“THE BALL! THE BALL!” we shrieked when it appeared for the first time. Yes, you can turn into a ball. This is the rolling I was talking about earlier. The reason for the ball, it seems, is because it is hilarious. It is invulnerable, can somehow jump, and it works extremely well when it pings off jump pads. Rolling towards your enemies is the good stuff. I can say no more about the ball, but it was certainly a highlight. 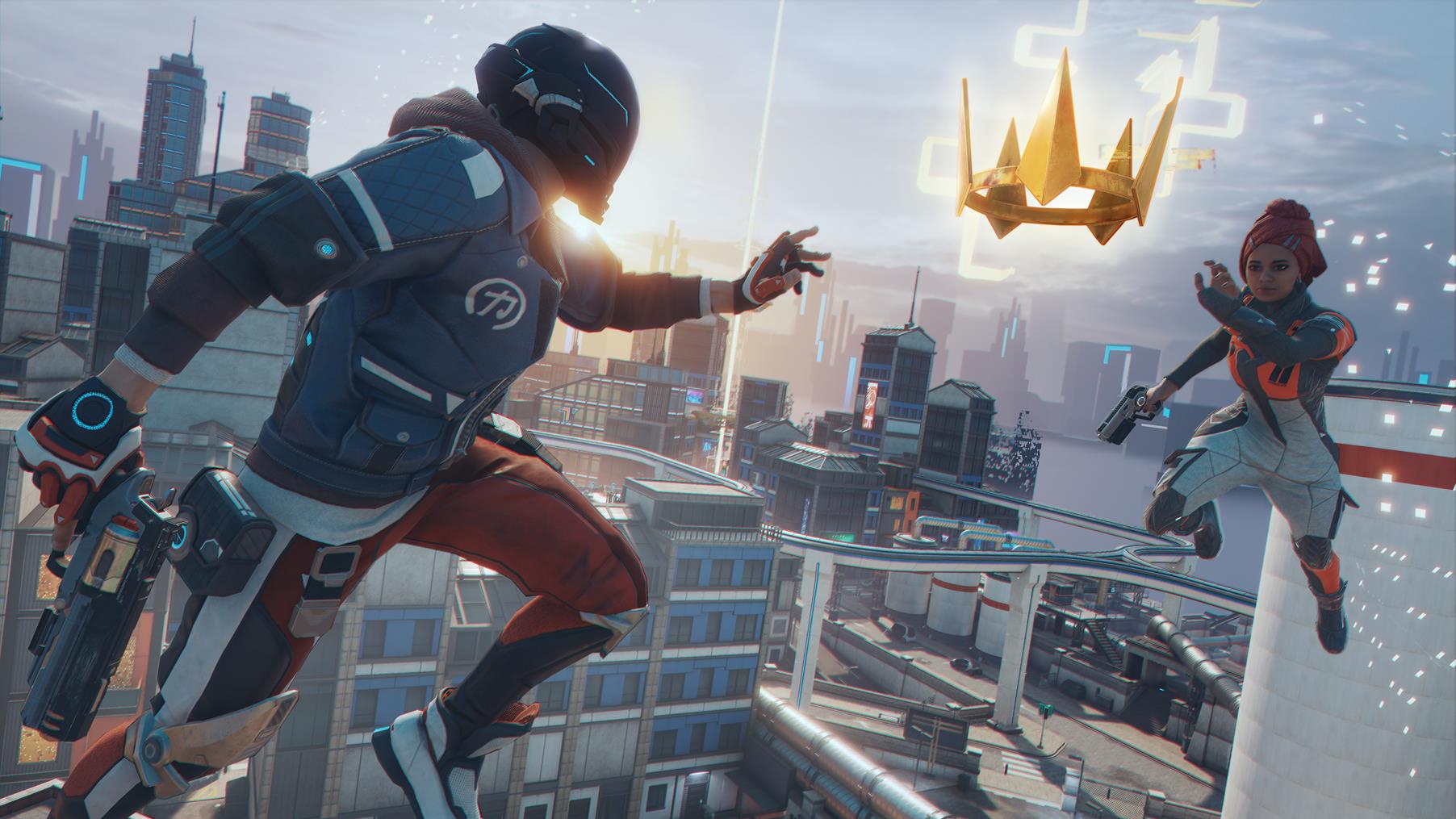 What I like the absolute best about hacks, though, is that when someone complains that they lost because of “hacks”, the chances are that it will be literally true.

Anyway, by this stage in your game it is highly likely that the circle will begin closing. Except - gasp! - there is no circle! (Or minimap? Odd). Instead, districts of the city dematerialise (there it is again!) and you have to flee them lest you (probably) be turned to triangles and deleted from the simulation. This doesn’t hugely change the Battle Royale formula, though it feels a bit more like Hunt Showdown’s triangulation to a limited area than the steadily diminishing play area of other games.

Perhaps more important than any of these things, though, is the general feel of locomotion and combat around a complex, surprisingly vertical game space. It’s slick. It’s intense. I always felt like I could understand how things were going to respond, and I was almost immediately able to judge the huge double-jump leaps I was going to make. If you think you can make it, then you can, and that’s a pretty strong indication of how good both the character control systems and the level design are in this game world. It also has a superb slide function, with convenient low gaps under half opened doors for you to slide under. Perfect.

And look, I said that there wasn’t much reason to care about the world-building, but I am enjoying that level design! The Euro-modernism-hi-tech fusion is fun and colourful and entirely suits the theme. There are jump pads and endless rooftops, and car alarms on the teardrop-smooth concept cars which are parked outside future cafes beneath the future monorail. It’s fresh and I am okay with it. 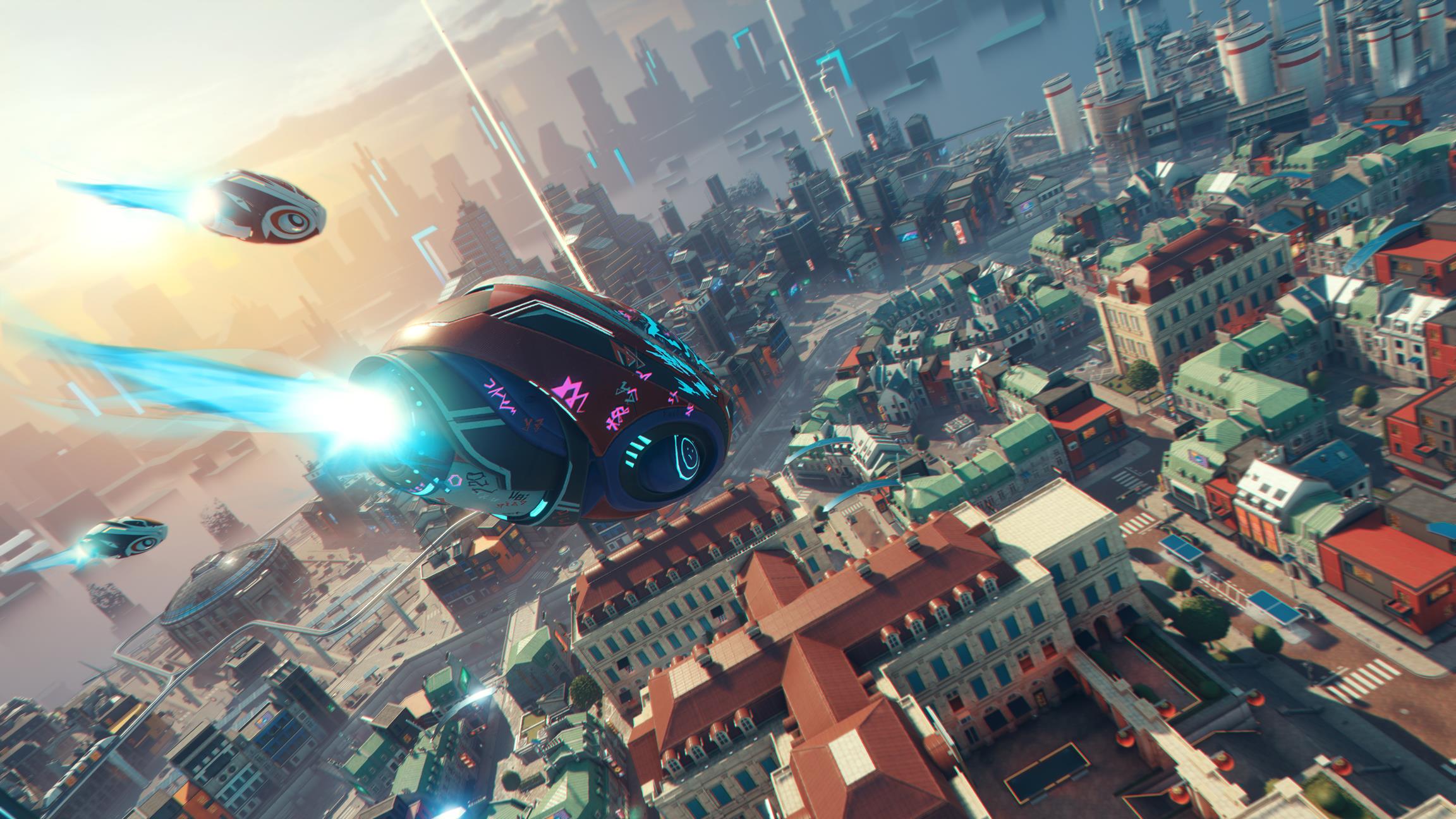 It is traditional to end an article with some form of summary or conclusion, rather than letting the words just trail off or suddenly stop, so let me say this: the express elevator to Free-To-Play success is a crowded one indeed, and whether there is room on board for Hyper Scape remains unclear. Fortnite is getting off at the penthouse because it offers so much raw stuff: it has long been packed with characters for you to burn money on, and offers a kick-around-with-mates level of creativity that we struggle to find anywhere else. Warzone, likewise, arrived in a blaze of macho playability and martial ludicrousness which it was hard to ignore. Hyper Scape certainly seems to have the technical chops, but I am not sure, even with the lovely city and the unexpected ball, that it has the character.

On this point I have to say that the starting characters, the defaults of this world, while pleasing in their diversity, are also remarkable in their blandness. That felt like a very deliberate decision. I mean, yes, assuming you stick around then you are going to want to customise your way out of their blandness into a wonderful customised cyberperson - that’s surely the reasoning. But that’s also a big assumption. Given how much else out there is already demanding your attention I think it’s safe to say that Ubisoft is going to have to unveil some tantalising extras to make this magnetic. I’d probably give Hyper Scape some of your time, for sure, it’s free to play, after all. But there’s something missing, and I am not yet convinced it’ll be sipping cocktails on the balcony a few years from now.

Oh, and for those who were concerned about the name: I typed Hyper Space seventeen times during the making of this article. Much to think about.

Check out our impressions of Watch Dogs Legion and Assassin's Creed Valhalla for more.