After years of speculation, God of War Ragnarok was confirmed as the real title of the game, rather than just a fan nickname for the untitled sequel based on the ominous warning from the trailer, “Ragnarok is coming.” Fans also occasionally call it God of War 5 or God of War 2 because of the confusing chronology stemming from the previous God of War in 2018 not having a number after God of War 3 in 2010.

Cory Balrog apparently teased the Ragnarok title before it appeared in the trailer in a lengthy tweet thread where the first letter of each post combined to spell “Ragnarok is coming.” Coincidence? I think not. Still, we’ll have to wait to see what Ragnarok exactly means to the upcoming God of War installment.

Here’s everything we know so far about the supposed God of War Ragnarok.

God of War Ragnarok has a release date

Sony originally revealed God of War Ragnarok with a teaser at the end of a PlayStation 5 showcase. Santa Monica Studio teased an initial release date sometime in 2021. However, the trailer debuted in September 2020 during the pandemic. Unfortunately, God of War was one of the many games delayed because of Covid complications.

In the middle of 2021, the studio pushed the release date back to 2022. Herman Hulst, Head of PlayStation Studios, claimed this was to ensure a higher quality product.

“So we have, currently, two very big, very narrative-driven games in development: Horizon Forbidden West and the next God of War. And for both of those, they’re frankly affected by access to performance capture and talent,” Hulst revealed in a PlayStation Blog interview.

Sony recently announced God of War Ragnarok is set to be released on 9th November 2022 and pre-orders will be available in the UK from 10am on 15th July 2022 at Game.

God of War Ragnarok is cross-gen, meaning it’ll be available for both the PlayStation 4 and PlayStation 5. Hulst also confirmed this information in his PlayStation Blog interview.

"Where it makes sense to develop a title for both PS4 and PS5 — for Horizon Forbidden West, the next God of War, GT7 — we’ll continue looking at that,” he said. “And if PS4 owners want to play that game, then they can. If they want to go on and play the PS5 version, that game will be there for them.”

He stressed that PlayStation console games remain a priority. However, Sony hasn’t ruled out expanding its games to other platforms such as PC in the future. For example, Horizon Zero Dawn was eventually released for PC two years after its original launch.

God of War Ragnarok follows the story of God of War, the most recent installment of the series starring Kratos and his son Atreus. This sequel reportedly takes place a couple of years after the first game. 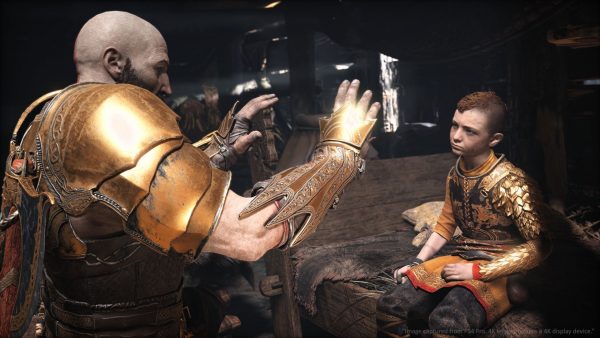 Fans predict that Ragnarok will include Thor as a major antagonist because his children were slain during the events of God of War. However, this hasn’t been confirmed and only teased in the original game's secret ending.

It’s likely that some family members will hunger for vengeance considering the nature of the series, though. Revenge, family, and war mean that these hunches could add up into an actual plot point.

God of War Ragnarok gameplay is still mostly a mystery. Presumably, it’ll build off of elements from God of War. However, it’s still not clear exactly what the sequel will change and what it’ll keep. Likely features include upgradeable weapons, foraging for materials, skill trees, and other common RPG elements.

From the reveal trailer embedded above, we can see that the open-world elements - where Kratos and Atreus explore using a longboat - return in Ragnarok. While we also see Kratos use both his Norse axe and Grecian Blades of Chaos.

There will be five different editions up for grabs: Standard, Launch, Digital Deluxe, Collector's and Jotnar Edition.

More On God of War Ragnarok