Assassin's Creed 4: Black Flag is now available for pre-order at GameStop, and if you drop cash early, you'll net The Black Island Pack.

According to the description, the immortalized rum spokesman and real-life Welsh privateer Sir Henry Morgan has a ship sink off the coast of Black Island full of legendary sailing equipment.

Players will need to explore the Black Island and retrieve these items that the pirates have been "desperately searching for."

It's a way to get the pack without having to drop a load of cash on the Black Chest Edition, if that's all you were wanting at any rate.

To life, love and loot, etc.

Assassin’s Creed 4: Black Flag lands on PS3 and Xbox 360 October 29 in North America, and November 1 across Europe. The PC version is due on November 19.

The PS4, Wii U and Xbox One versions will be made available on November 22. 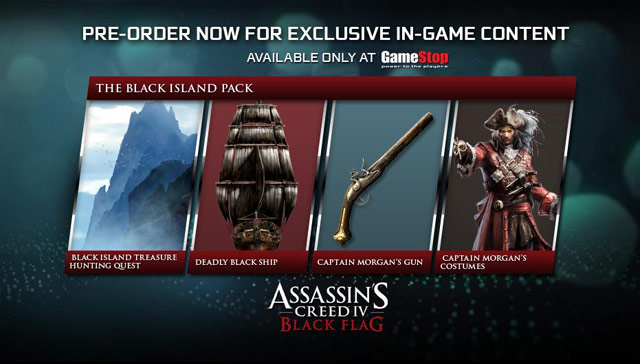