Assassin's Creed 4: Black Flag has received its first gameplay trailer, along with a list of collector edition bundles and a VIP pass called "The Watch" that are heading to retailers near you. 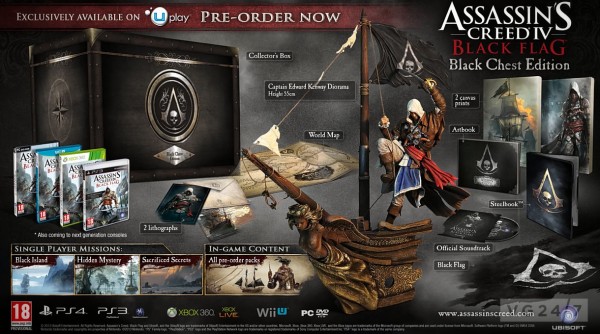 In a release sent to VG247 today, Ubisoft confirmed that the PC, PS3, PS4, Wii U and Xbox 360 editions of Assassin's Creed 4: Black Flag would each receive collector edition bundles.

Pre-order customers will also gain access to "The Watch", a VIP programme that gives players a special activation code that unlocks bonus content. UK and Ireland players can only get the code from can only get this code from Game, Amazon and GameStop and direct from Uplay.

VIPs will get a special bonus mission, extra rewards and access to an exclusive social hub where you can chat about the game, compare achievements and more. You can check out the Assassin's Creed: The Watch hub here.

You can also pre-order a limited Edward Kenway: The Assassin Pirate figurine on Uplay from today, ahead of its October release. Buying the figure will also net you a DLC code for bonus in-game weapons and skins.

Now then, those collector editions are as follows:

The Skull Edition (available across the UK)

That's a nickel and dime proposition if ever I saw one. Now then what you really came for, the new gameplay trailer: