Your journey through The Outer Worlds isn’t straightforward. As you make your way throughout the colony there are multiple factions vying for your attention, loyalty, and service. One early dilemma is the “Comes Now the Power” quest, which puts you in the middle of an old dispute between the town of Edgewater and a group of Deserters.

Reed, the town mayor and overseer of Edgewater’s saltuna cannery, wants you to bring the breakaway group home to bolster his workforce, but the Deserters have other ideas.

The crux of the Comes Now the Power quest is whether you ultimately decide to throw your lot in with either side and reroute power to Edgewater or the Deserters.

Obviously, this guide is going to contain key story missions, so consider this your spoiler warning.

And The Power Quest Guide

To begin the quest, visit Reed by taking the elevator up to his office in the saltuna cannery. 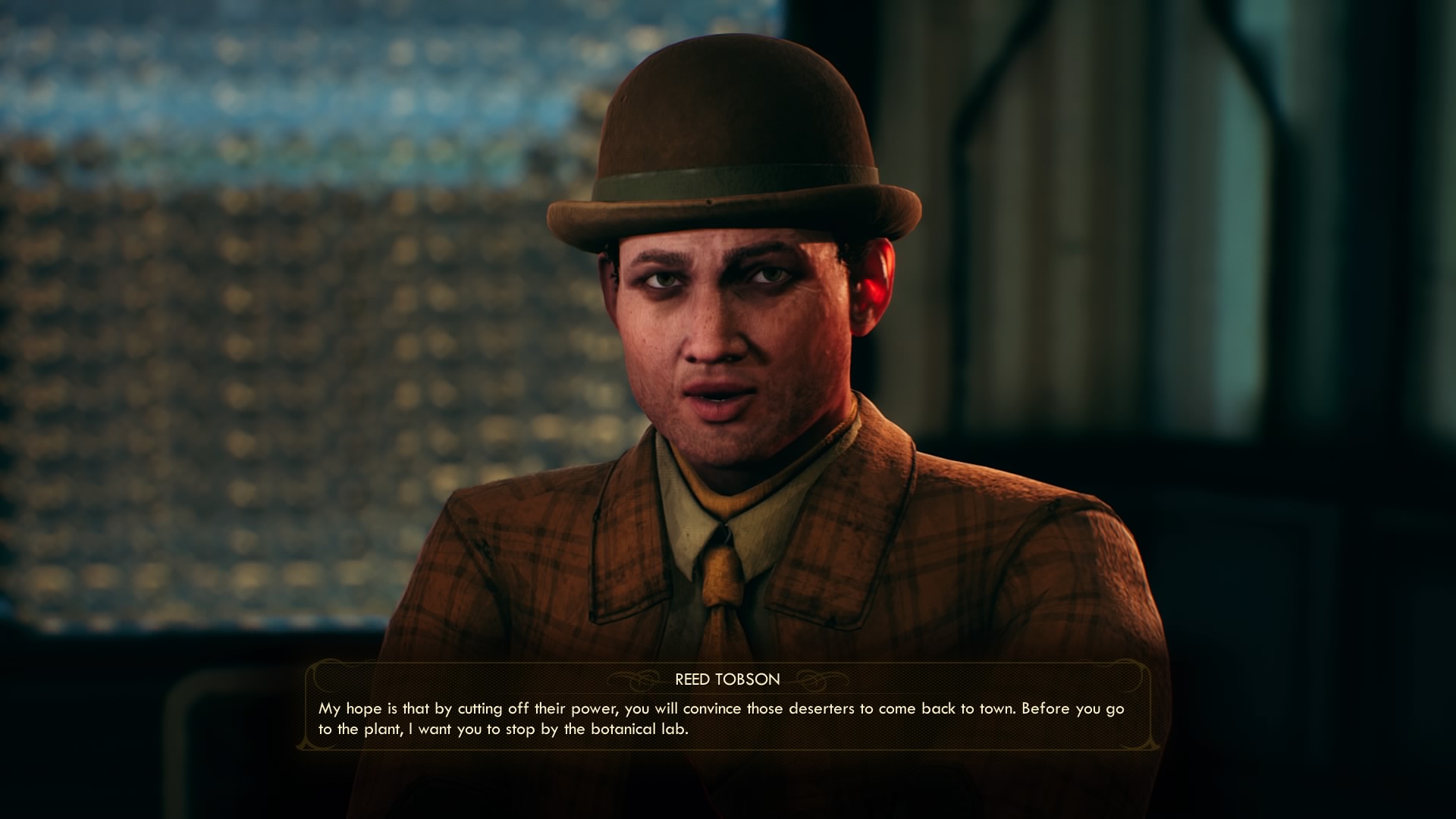 During the conversation, agree to bring Parvati along with you and she’ll join your crew as a permanent companion.

She’ll ask you to seek advice from the town Vicar before you set out. Go and see him at the chapel and he’ll set you on another quest - The Illustrated Manual - which will lead to him joining the crew as well.

Now it’s time to make your way up to the Deserter’s camp by following the quest marker to the north of the area.

Once you’re there, speak to Grace Romero at the entrance and say you’re looking for the Geothermal Plant. She’ll tell you to talk to Adelaide, so head into the greenhouse ahead and do so. 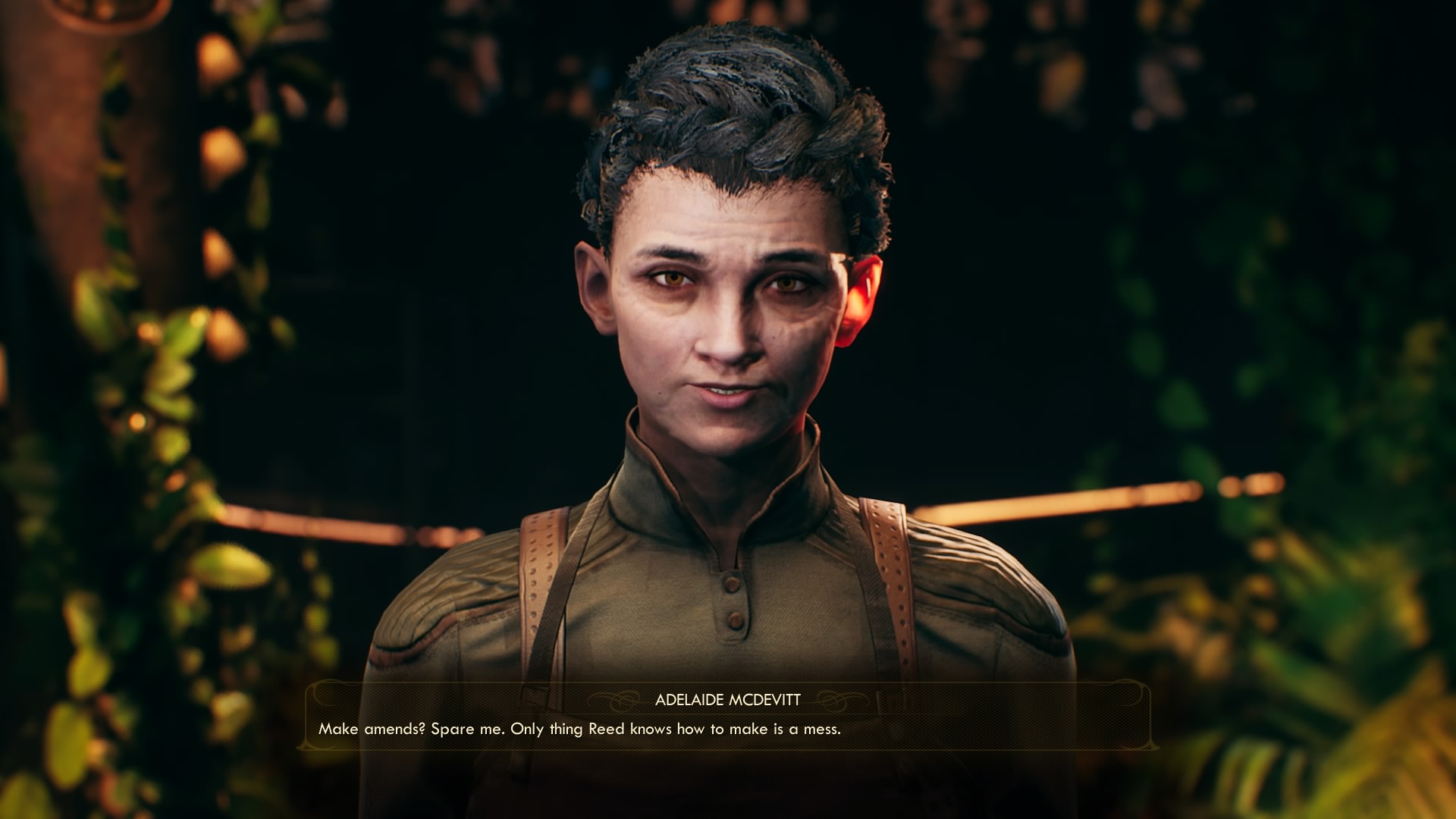 During the conversation tell her about Reed’s offer, then tell her you’re going to turn the power off. She’ll give you the option to turn off the power to Edgewater instead.

At this point, I’d recommend talking to Thomas by the workbench and Grace Romero at the camp entrance to get their Faction quests. These are simple to complete and will make a palatable outcome much easier to achieve at the end of Comes Now the Power.

You need to find Thomas a few books, while Grace wants you to track down a missing woman. All you need to do with both is follow the linear markers, but they’re fun. Doing this will increase your positive reputation with the Deserters which is vital later.

Once this is done, head to the Geothermal Plant on your map. This area is filled with tough automechanical enemies. Their armour is thick and resistant to conventional weapons, so aim for the small blue light on one side of their chassis - which is their weak spot. 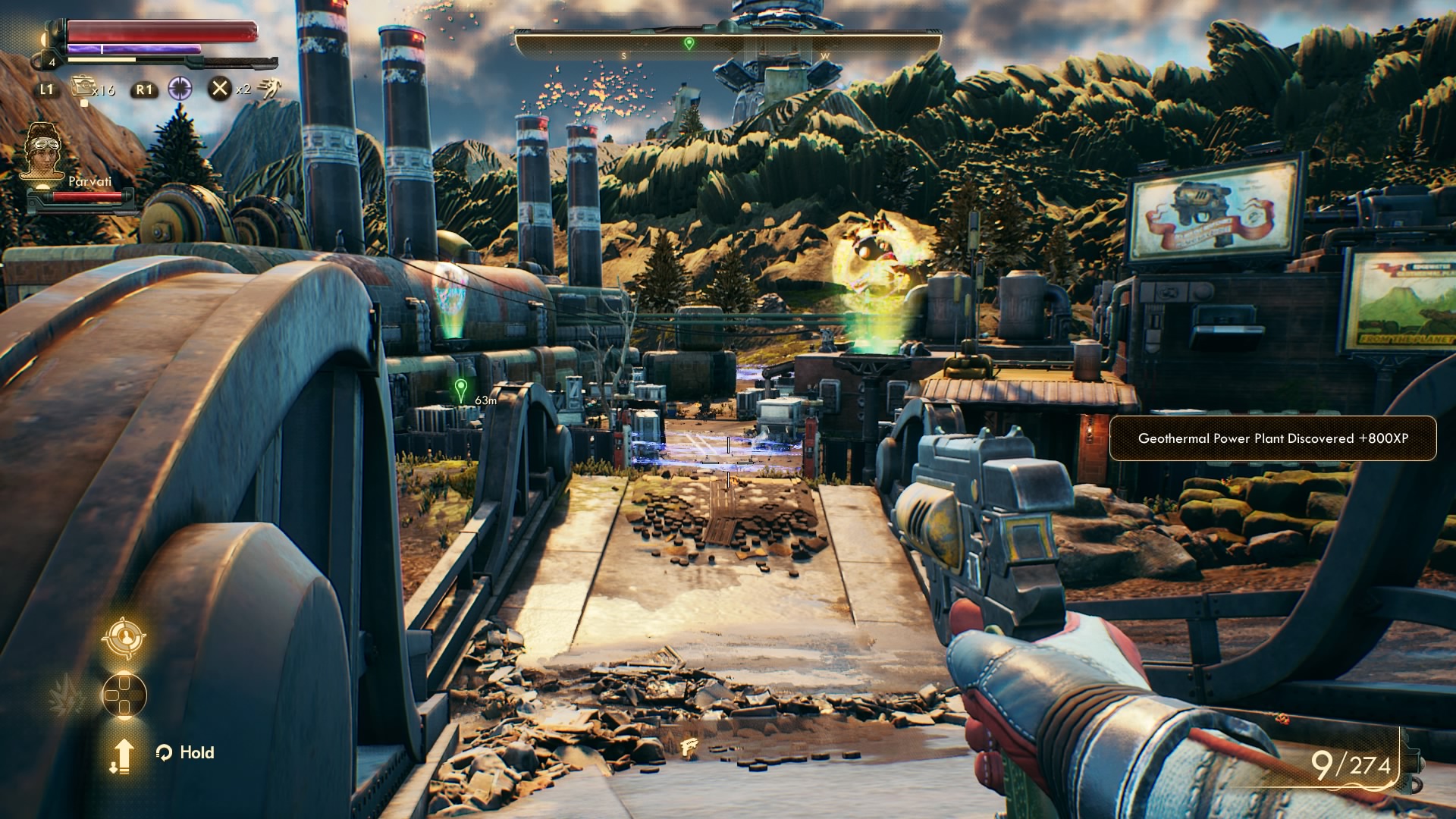 Head inside and you’ll find yourself in a lobby with a vending machine. Jump up through the glass on your right to get out into the main plant.

Head over to the right to get to the main computer terminal you need, which you can unlock with the key that Reed gave you. 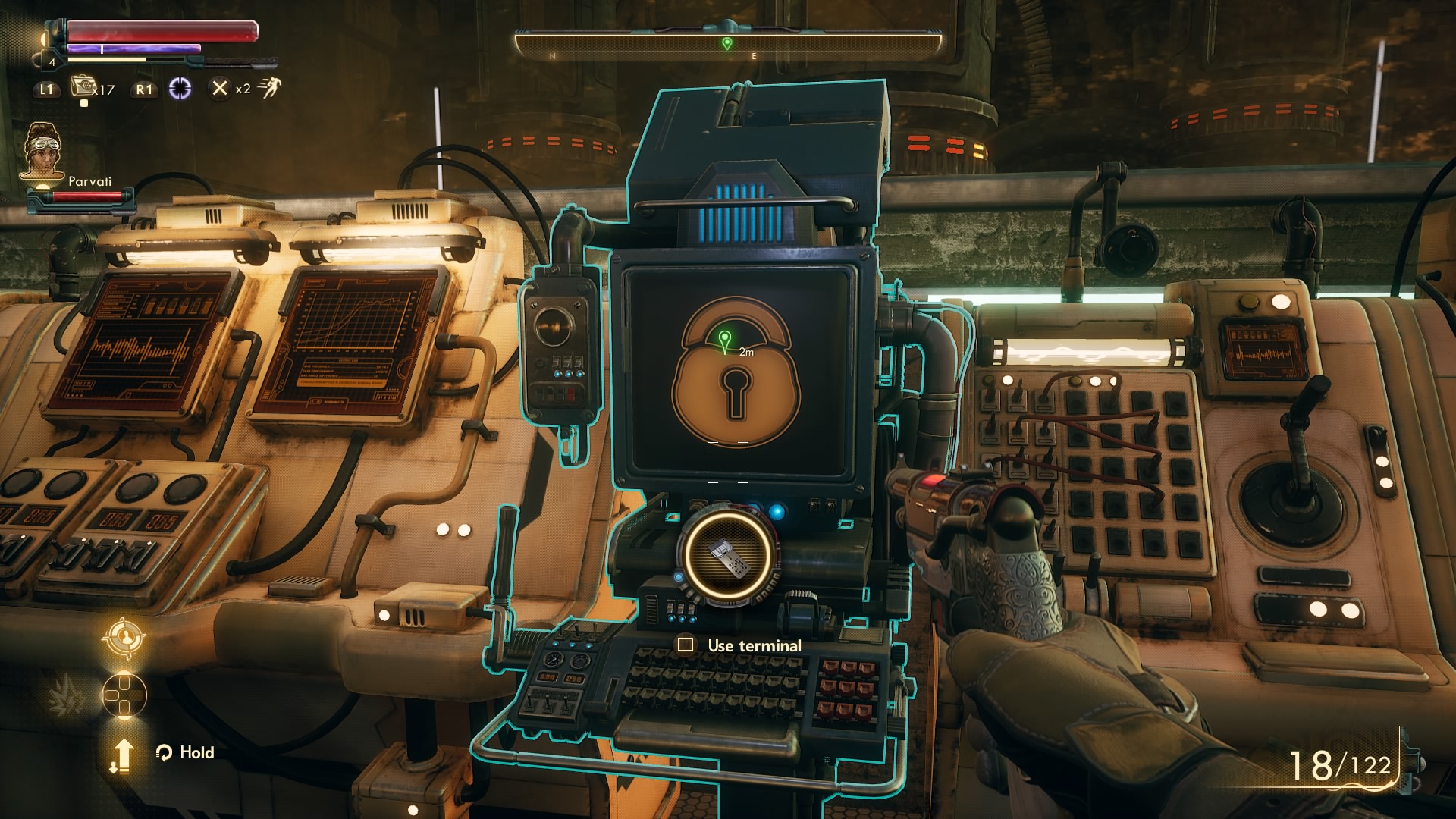 Unfortunately, you'll now have to flip three switches throughout the plant to get it to work.

Follow the marker to the first switch, defeating the automechanicals along the way. Flip it, then keep going further in. 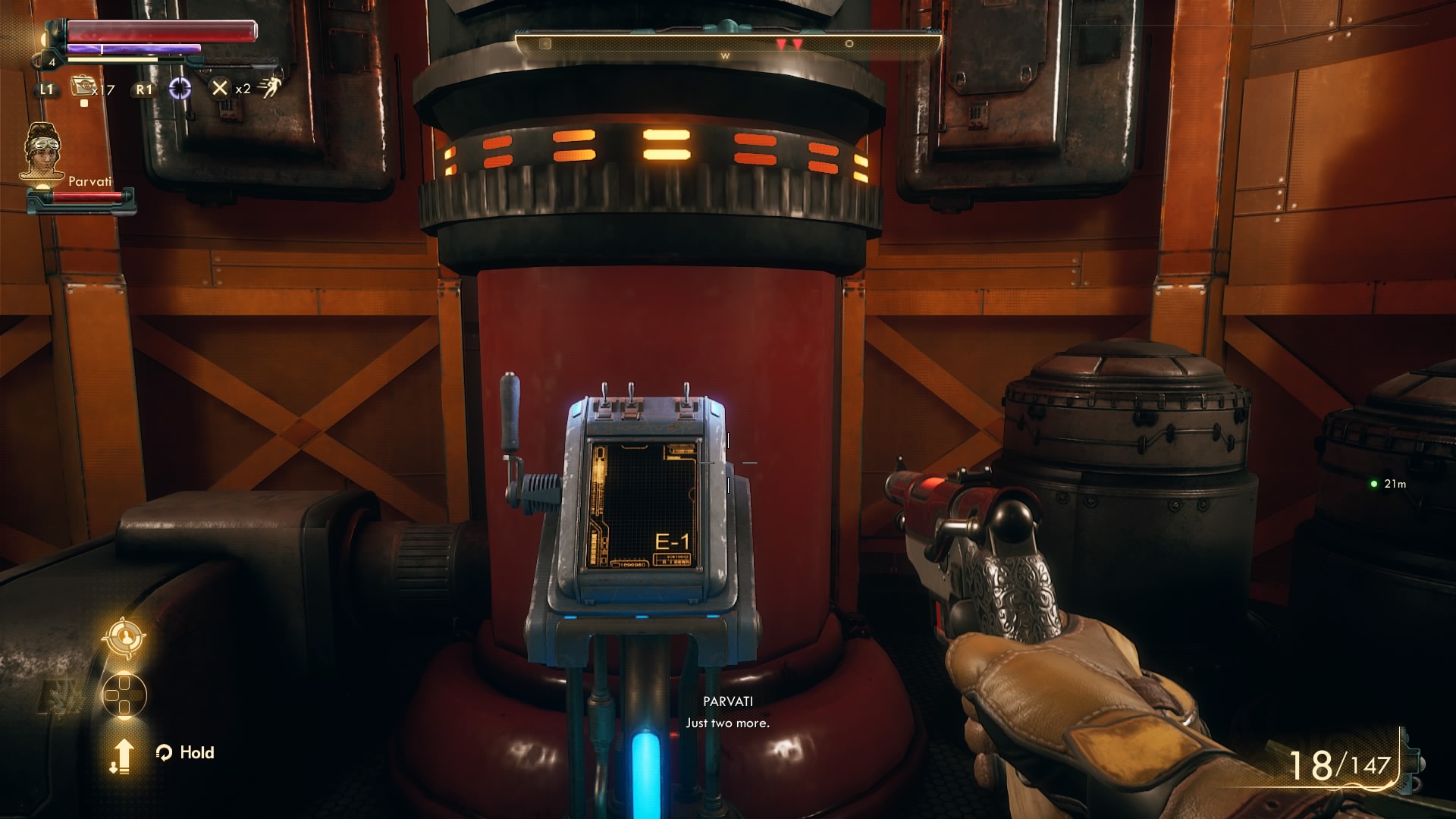 Under the Spacer’s Choice sign just in front of you, there’s a room lit with a red light. Go down one flight of stairs then climb down the ladders on the “02” floor to speak to Higgins. 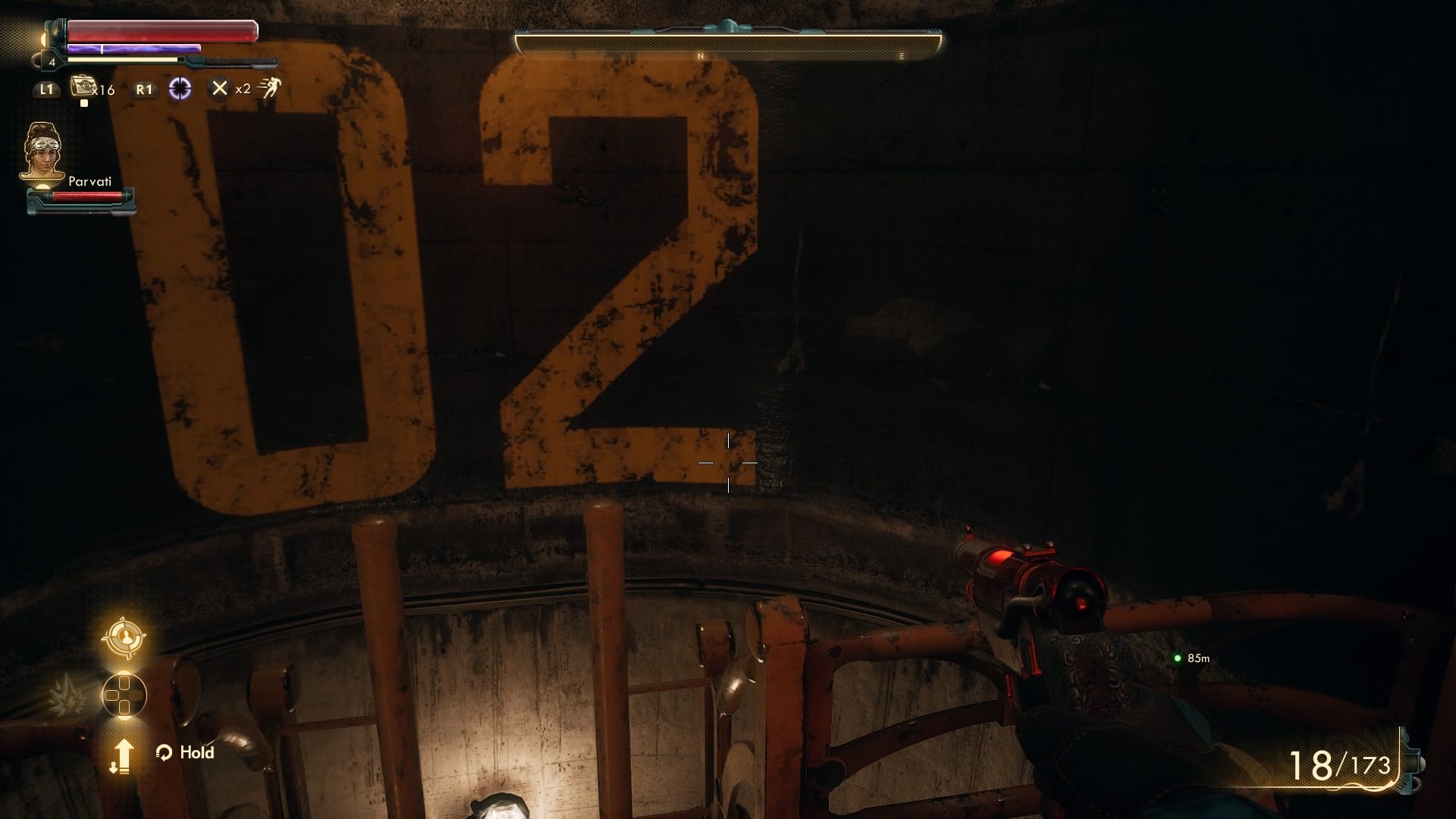 Persuading him allows you to reprogram the mechs in the plant to destroy each other. The terminal to do this is back up the ladders, just next to the room with the first switch. 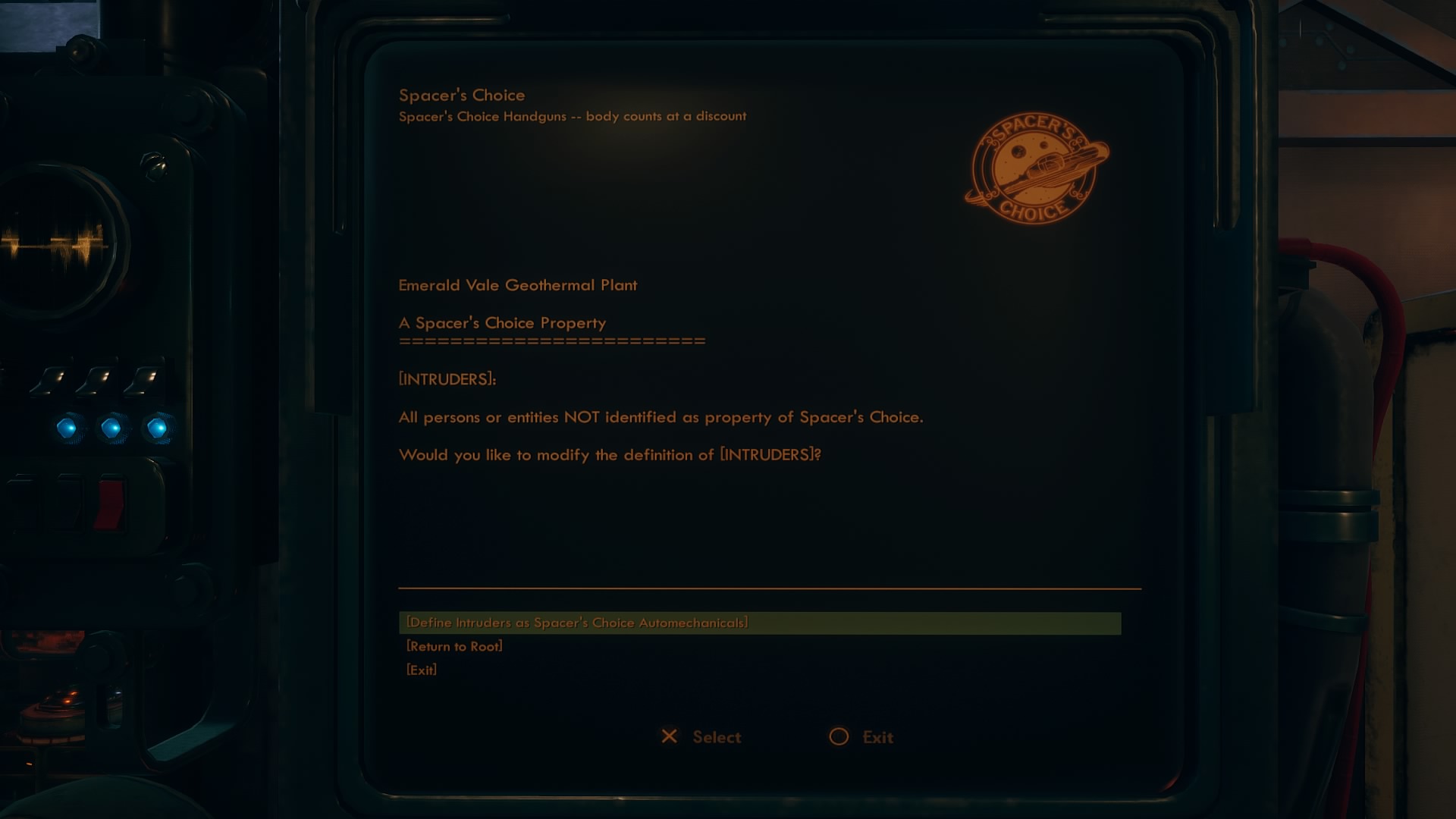 This isn’t a requirement, however, so you can skip it and just beat them up yourself.

Continue through the “02” room and head right towards the workbench on the other side. Then use the ladder to get up over the steam and hit the second switch. 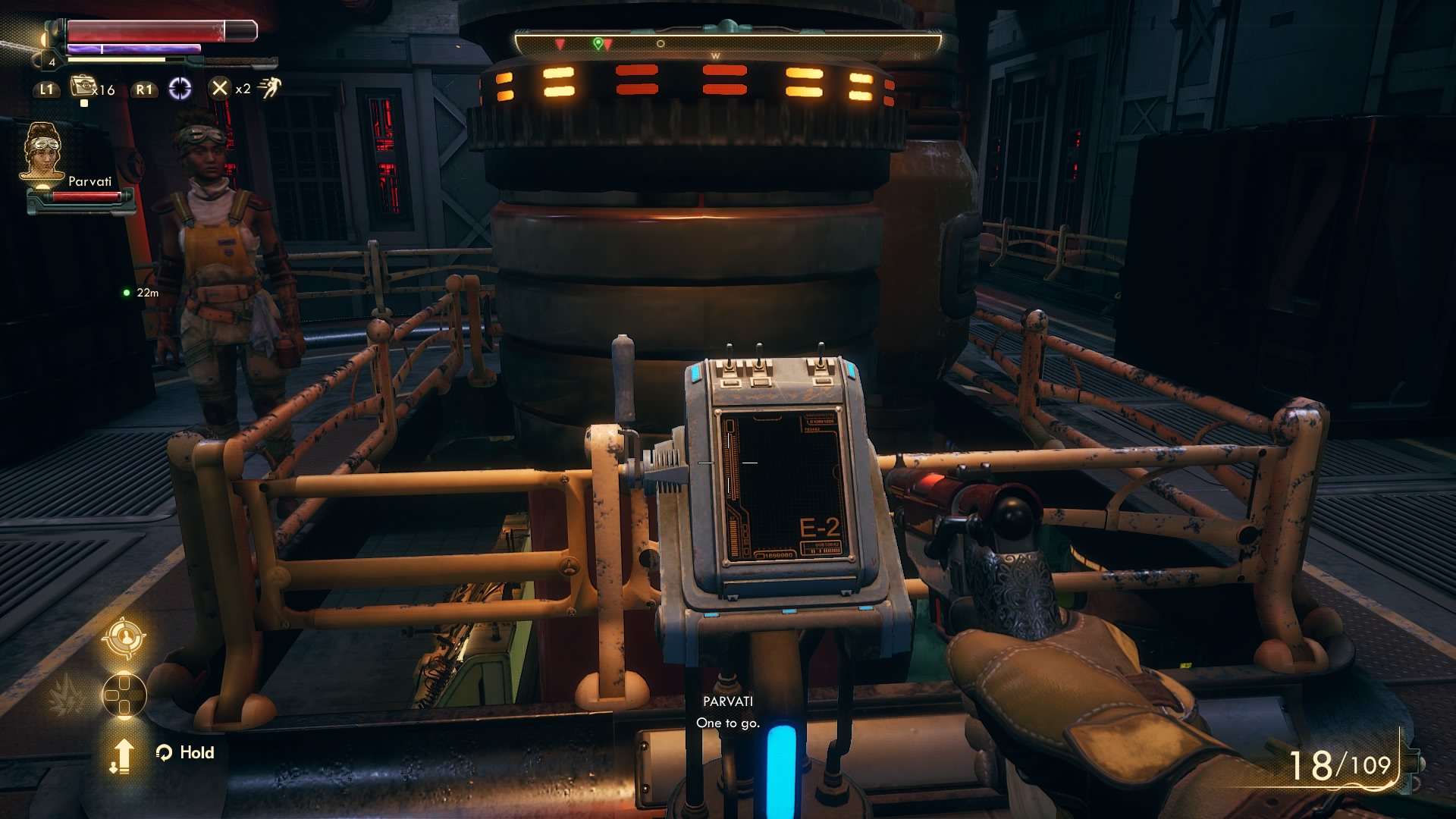 Now go left into the room with the final switch. 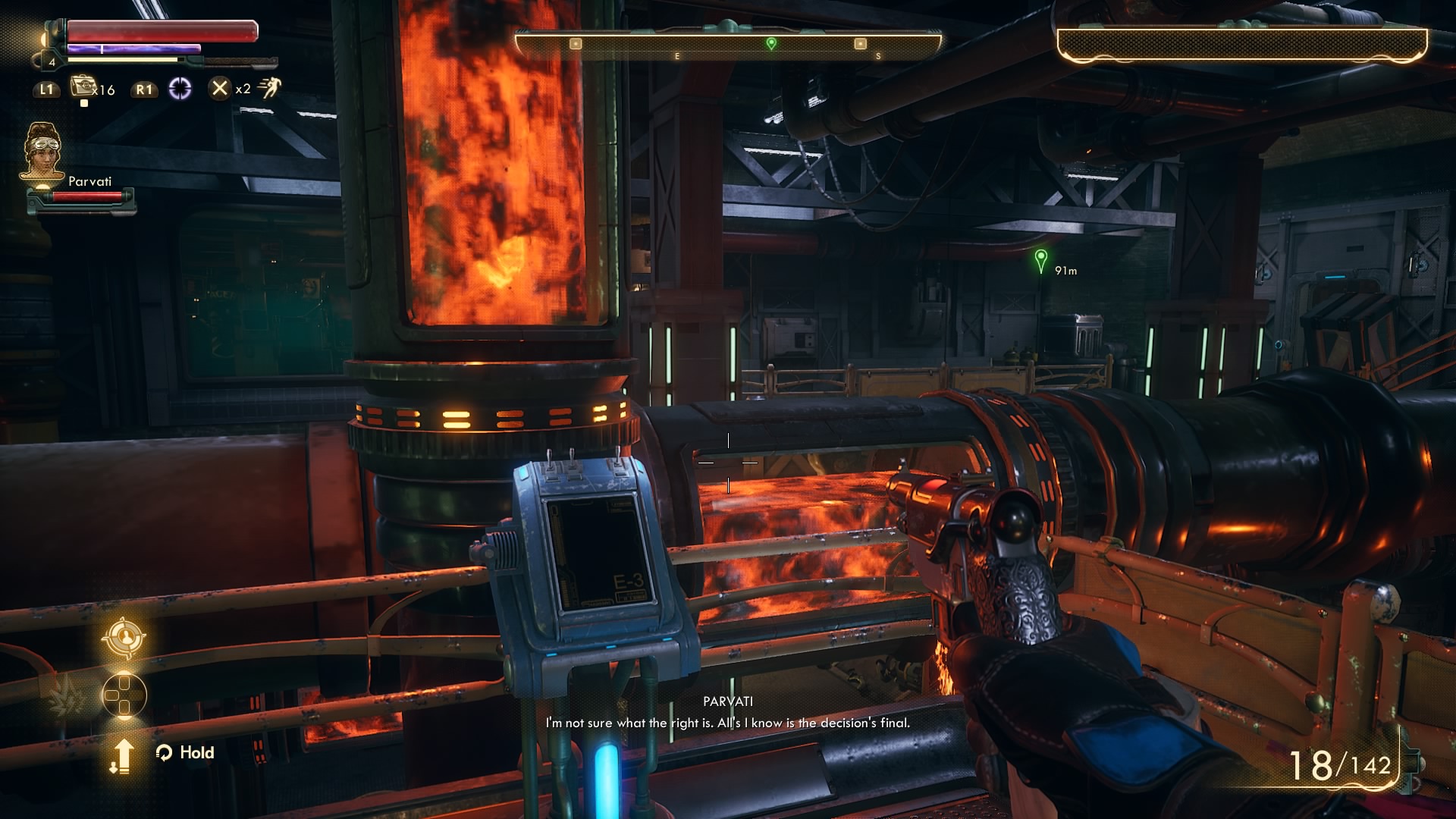 With that done, return to the terminal to make your choice.

Should you reroute power to Edgewater or the Deserters?

This next section is loaded with spoilers, so consider this your final warning.

It’s a difficult choice to make, so we’ll go into more detail below.

There are many different ways you can play this:

Reroute to the Deserters

If you decide to reroute power to Adelaide, upon your return to Edgewater you’ll be met by a mob outside the cannery and Reed confronts you on the way to the power regulator with armed guards. You then have to pass an intimidate check to avoid violence.

This path increases your reputation with the Deserters, but damages your standing with Spacer’s Choice and The Board. Despite the sticking it to corporate overlords and all, I’d probably call this the “bad” or chaotic ending - I won’t ruin why, but speak to Adelaide about how she tends her garden.

Take your regulator from the cannery basement and head back to The Unreliable.

If you reroute power to Edgewater and want all of the Deserters - including Adelaide to return home, then you need to convince Reed to leave. 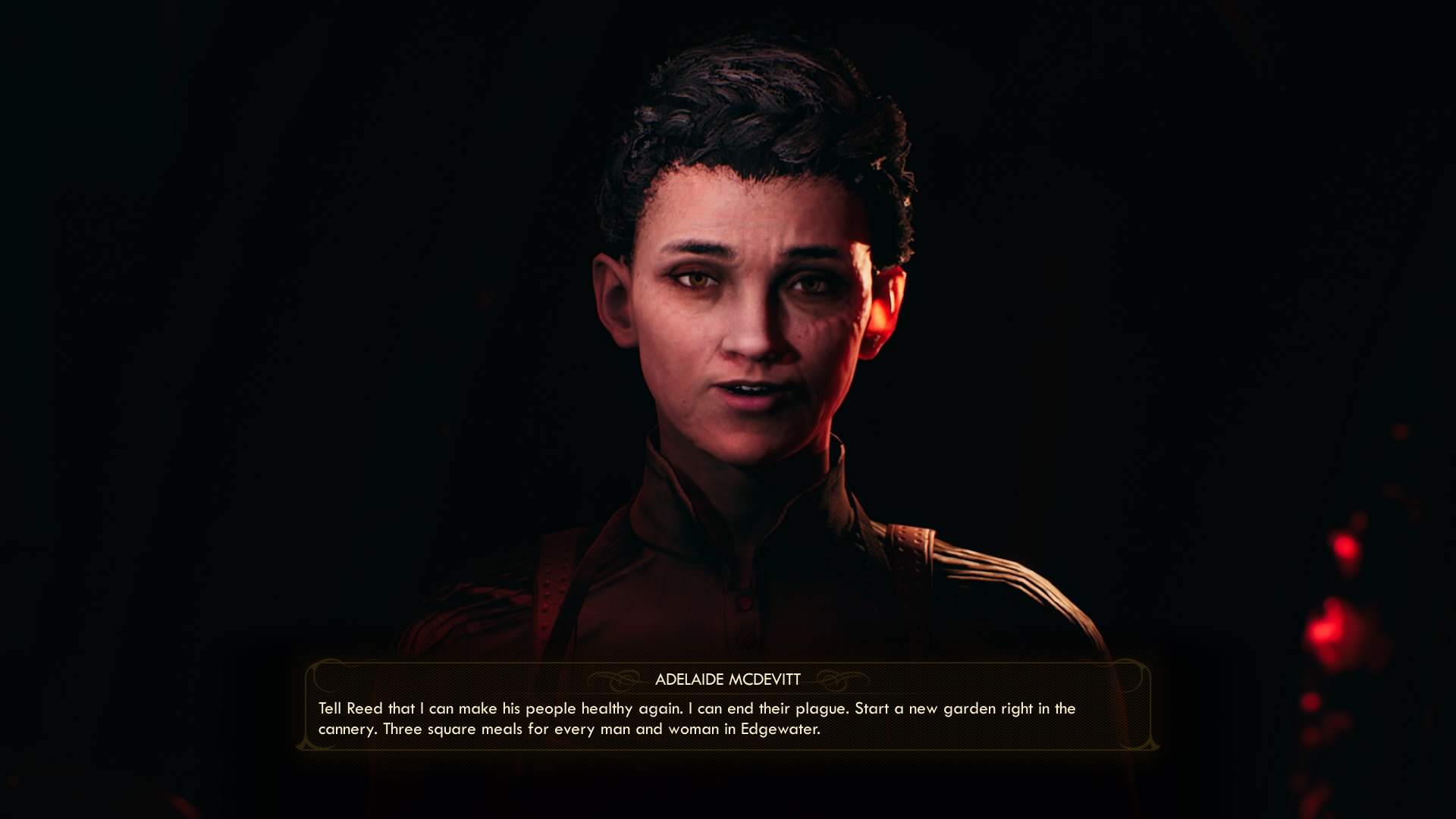 First, head to the Deserter camp and take the power regulator. Speak to Adelaide and implore her to come back to Edgewater. She’ll agree under the condition that Reed is gone.

You can achieve this with violence, or by passing the appropriate persuade and lie checks when you speak to him after returning from the Geothermal Plant. Ask him about the animosity between him and Adelaide, say that he let her son die, that the town is falling apart and that the Deserters aren’t sick. You can then persuade him that the townspeople need the garden and that he should go.

This decreases your reputation with The Board but gives you Adelaide’s Watch, which is a Junk item worth 1,750 bits.

The ending where you bring most of the Deserters home without Adelaide and leave Reed at the head of the cannery keeps the majority of folk happy and gives you the best reputation boosts. 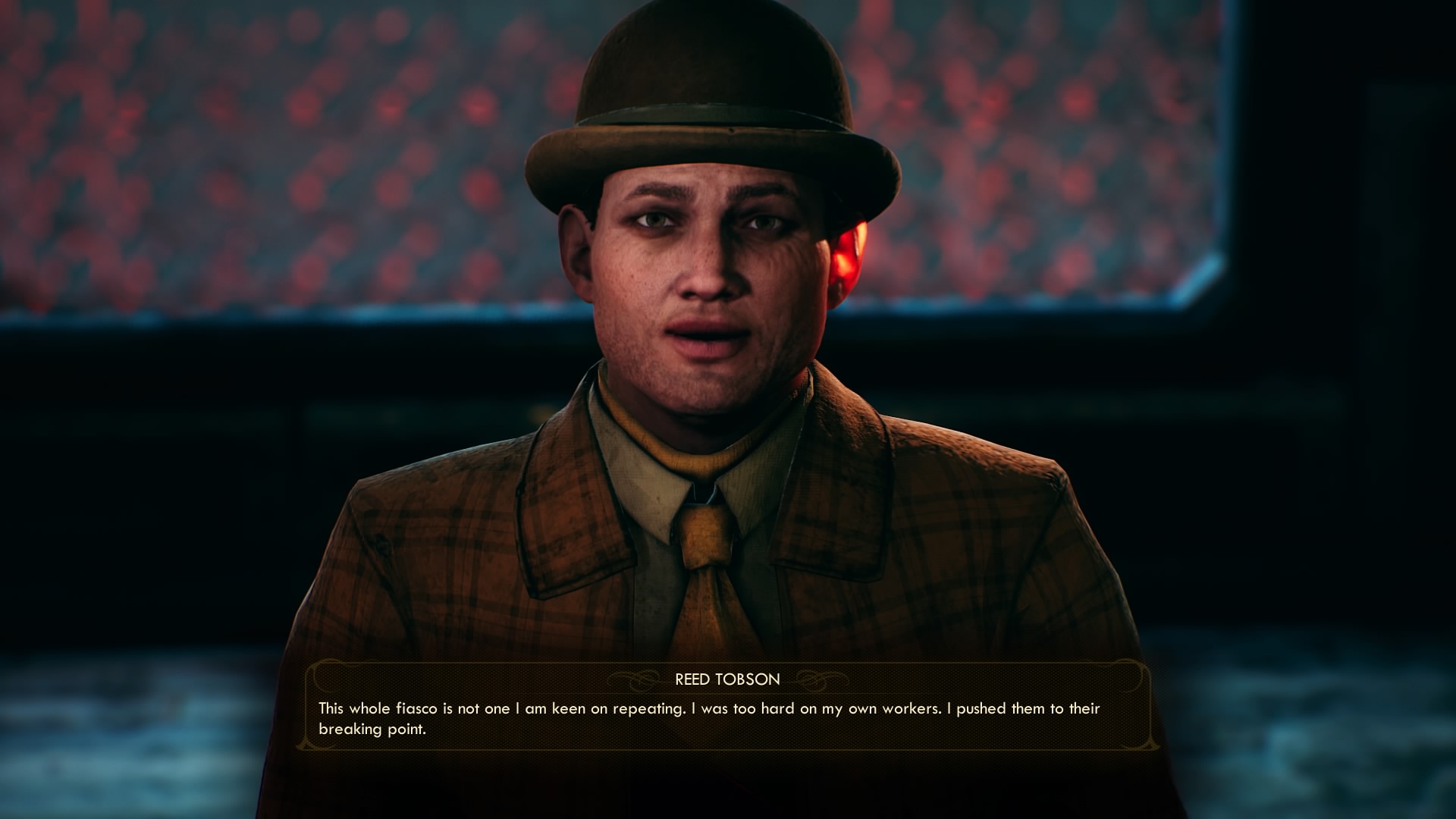 To do this ending, go to the Deserter camp before returning to Edgewater and convince Thomas and Grace to come back. They should be willing since you helped them with their individual quests. Take your power regulator and go.

Now when you return to Edgewater, Reed will commend you for your work, pay you, and your standing with The Board will increase.

In the ensuing conversation, you can lobby for Grace and Thomas to be given their favoured jobs in the town rather than going back to the cannery, so they’re happy too.

You’re then free to skip off into the distance.

If you really want, you can also just leave the Deserters without power in their camp and run off with the regulator. Sayonara, suckers!

Whichever path you pick, it’s time to repair your ship and set off into space. Here’s where you can find all of The Outer World's Science Weapons from the Void, and recruit every companion for your crew.