The Outer Worlds’ colony is filled with corporate excess, but none more so than the harebrained Science Weapons that lurk in abandoned research facilities that galaxy over.

Science Weapons are different from all others, in that their damage is linked to your Science skill, rather than purely your ranged combat. There are also several perks that increase their damage output.

While experimental power weapons are all well and good, tons of The Outer Worlds’ best weapons are unique variants of basic weaponry that you can find through interesting means scattered around.

So, let's take a look at how to get your hands on each and every Science Weapon in The Outer Worlds.

Weapons from the Void Quest Guide

The overarching quest that points you in the right direction of the science weapons is called Weapons from the Void, which unlocks when you rifle through Hawthorne’s private terminal in the Captain’s Quarters of The Unreliable.

The first Science weapon is also the easiest to find. All you need to do is head to Phineas’ lab and grab it from the counter next to his workshop. He doesn’t even seem to mind. 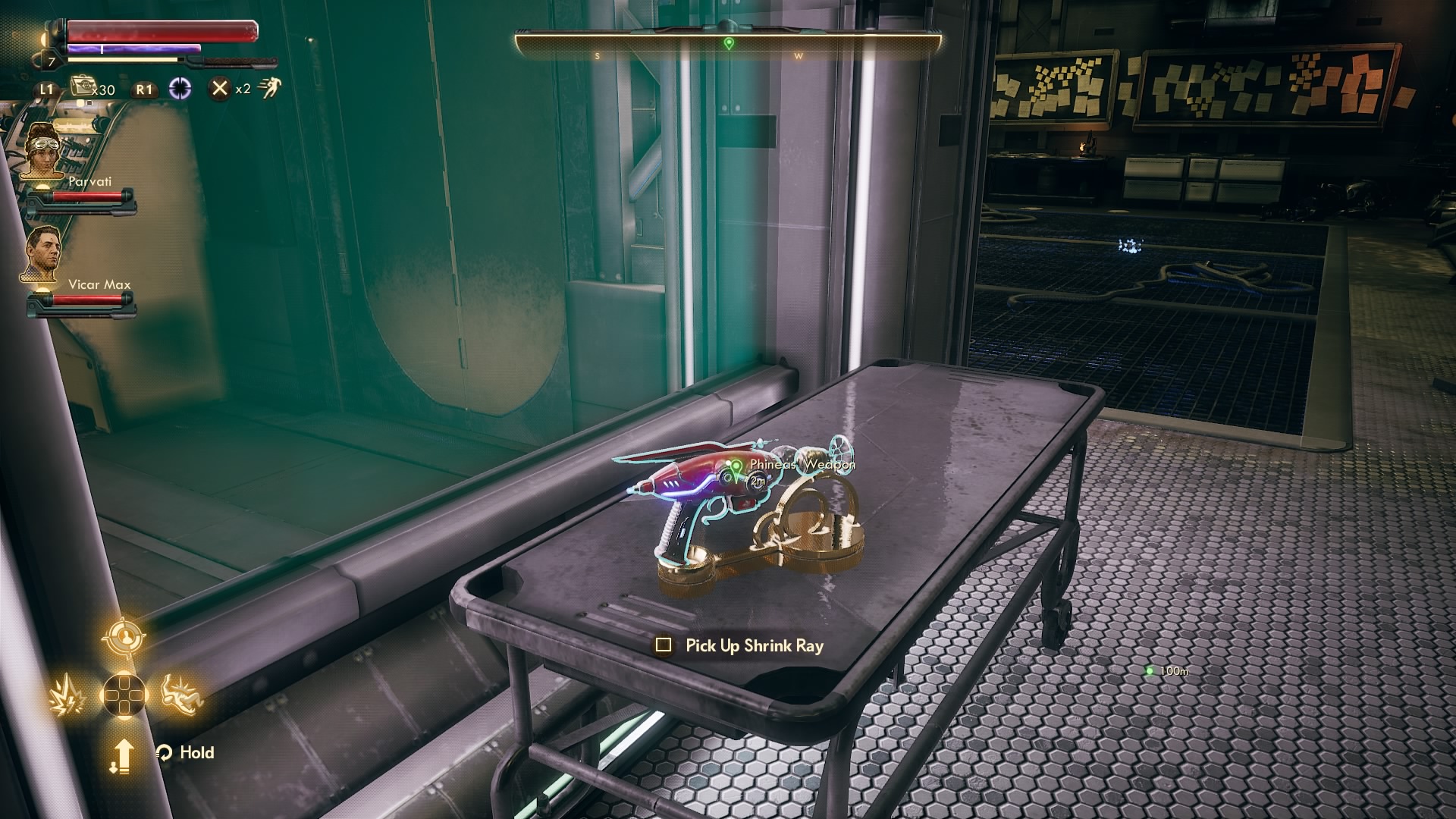 You’ll then need to go back and read the logs on Hawthorne’s terminal, which will point you towards The Groundbreaker.

There, you need to buy the datapads from Gladys the Smuggler at the Rest N Go in the Groundbreaker Promenade area of the space station. Reading these points you in the direction of the Science Weapons on The Groundbreaker and Scylla.

The location for this one is a little weird because it requires some light platforming, unlike pretty much everything else in the entire game.

You need to go to the soldier’s locker room just to the south of the Promenade. 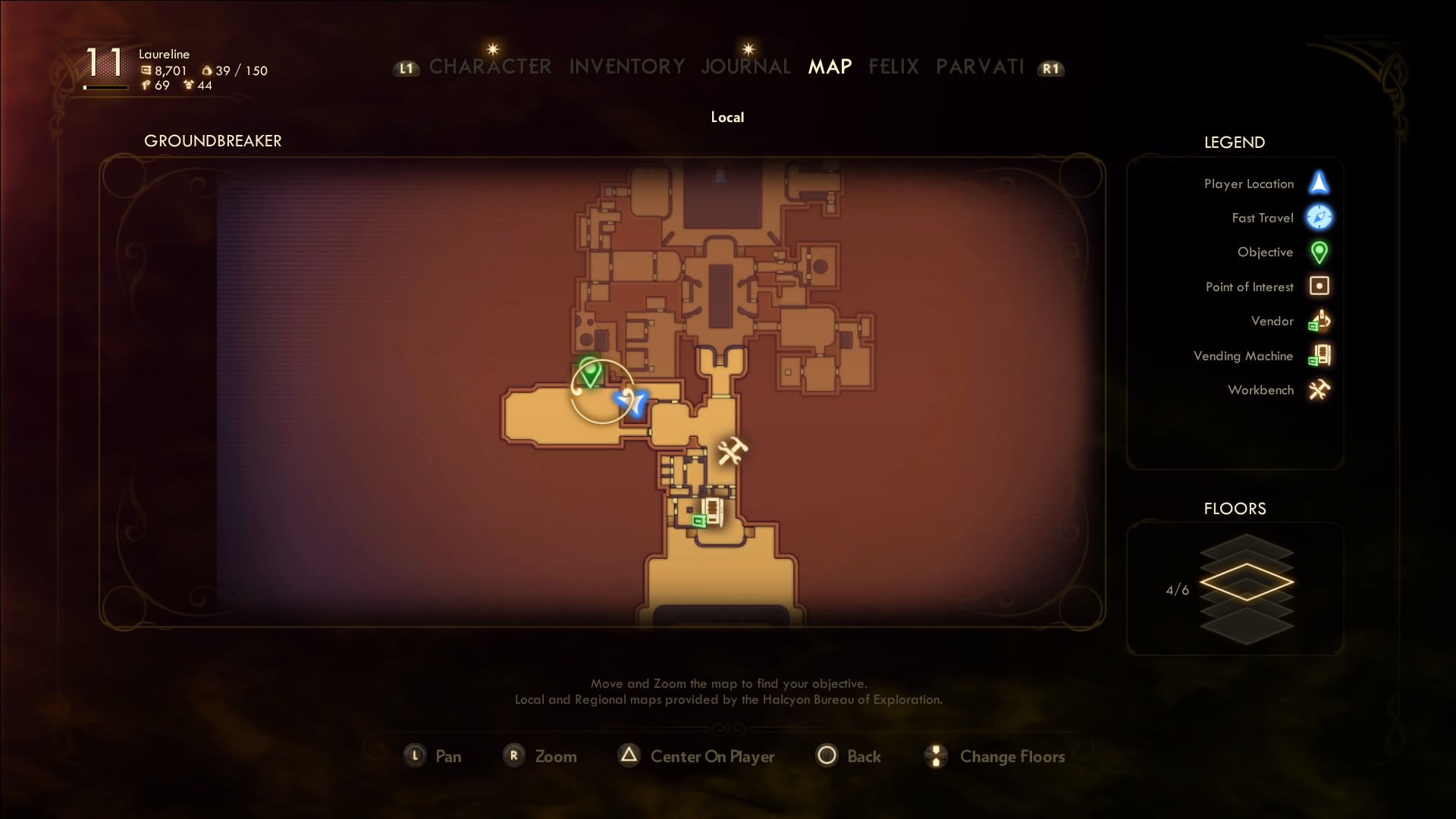 Then jump up on top of the lockers and crouch through the hole in the wall to enter a hidden room.

In this room, you’ll find a load of outlaws, but also the locked door to the Science Weapon Room. 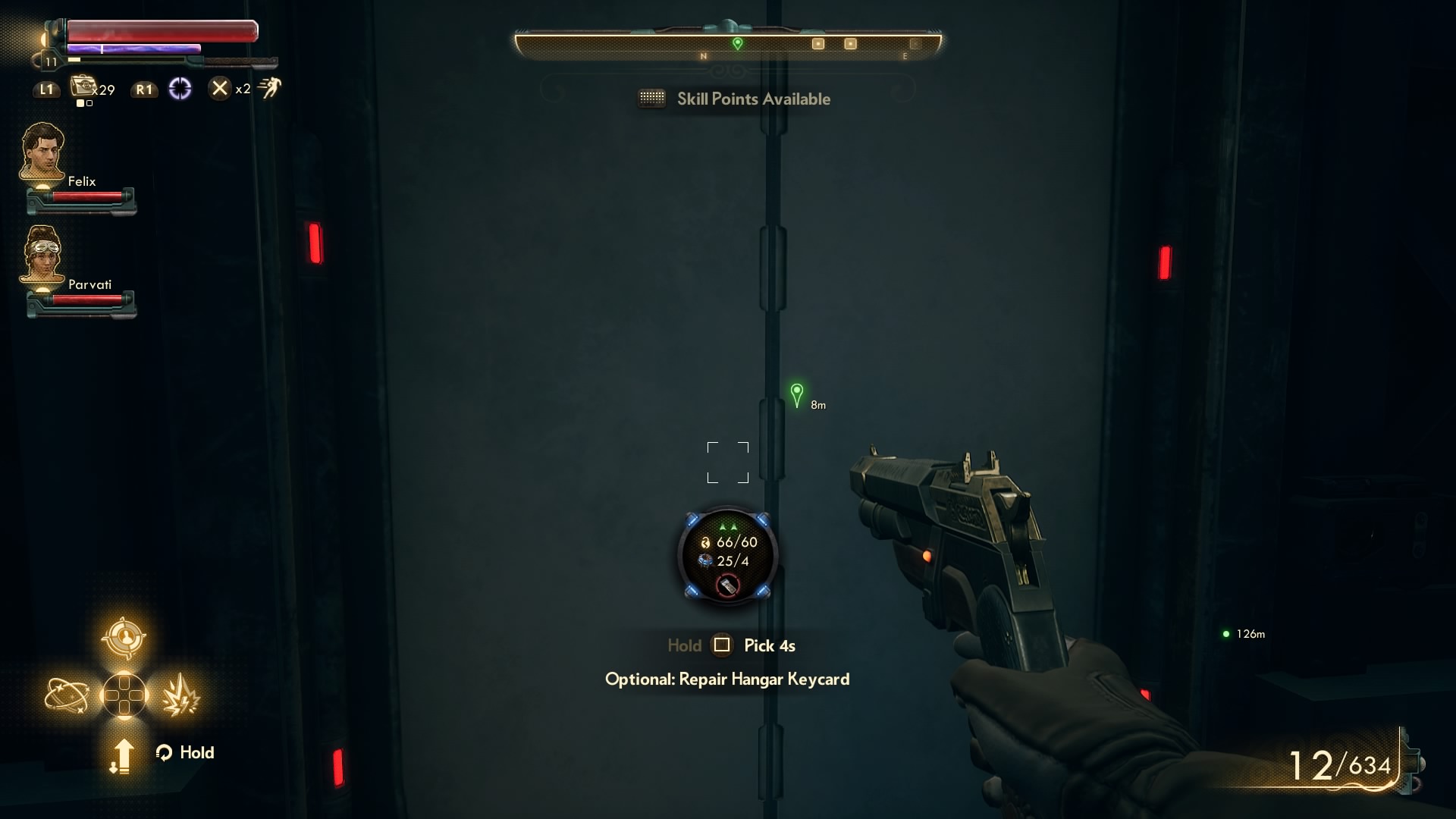 Kill the outlaws and lift the key to the room from the Squad Leader. Inside you’ll find the Prismatic Hammer! 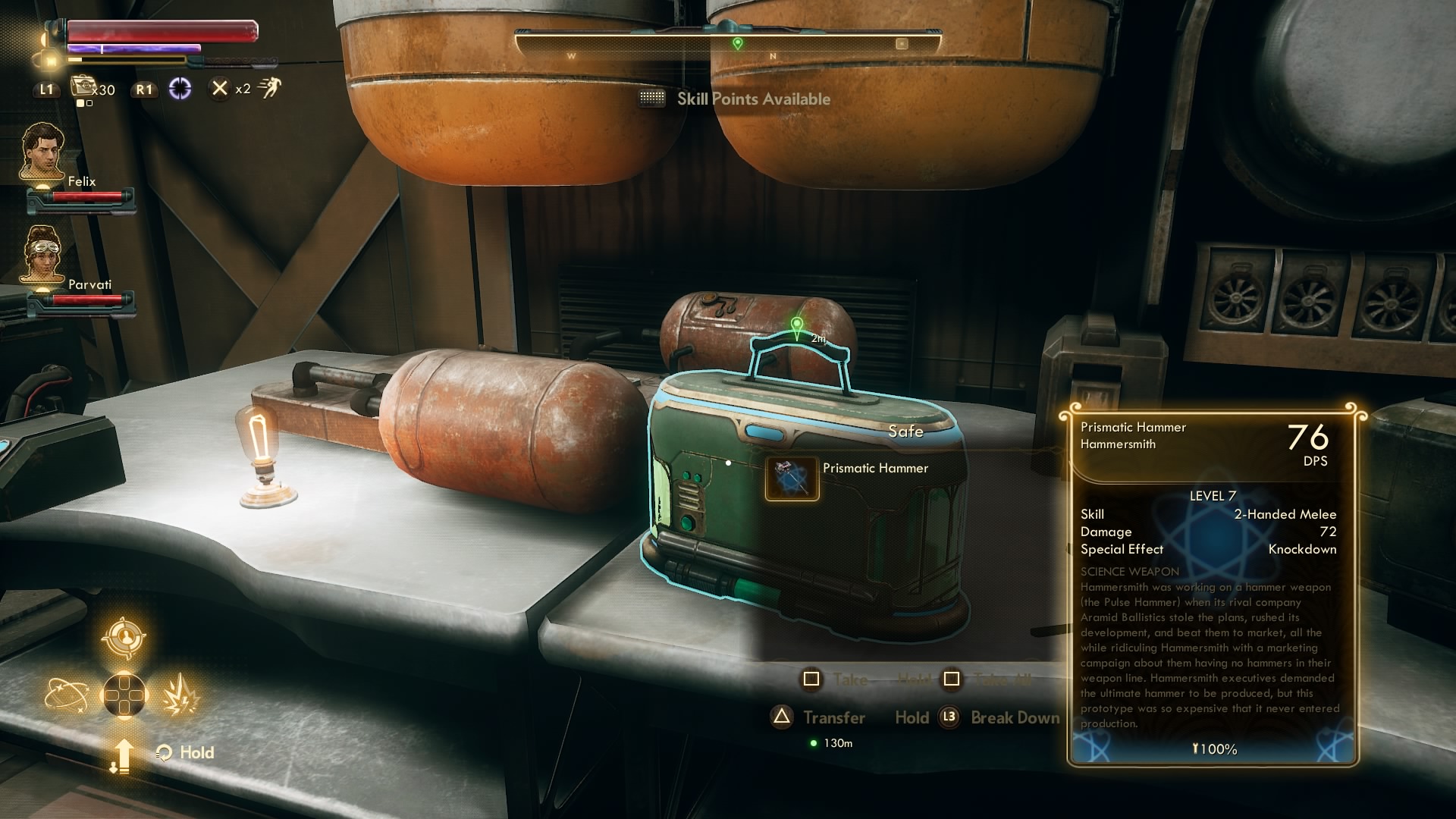 This is another easy one. All you need to do is travel to Scylla and follow the quest marker, the weapon is just in a crate in the northeast of the area. 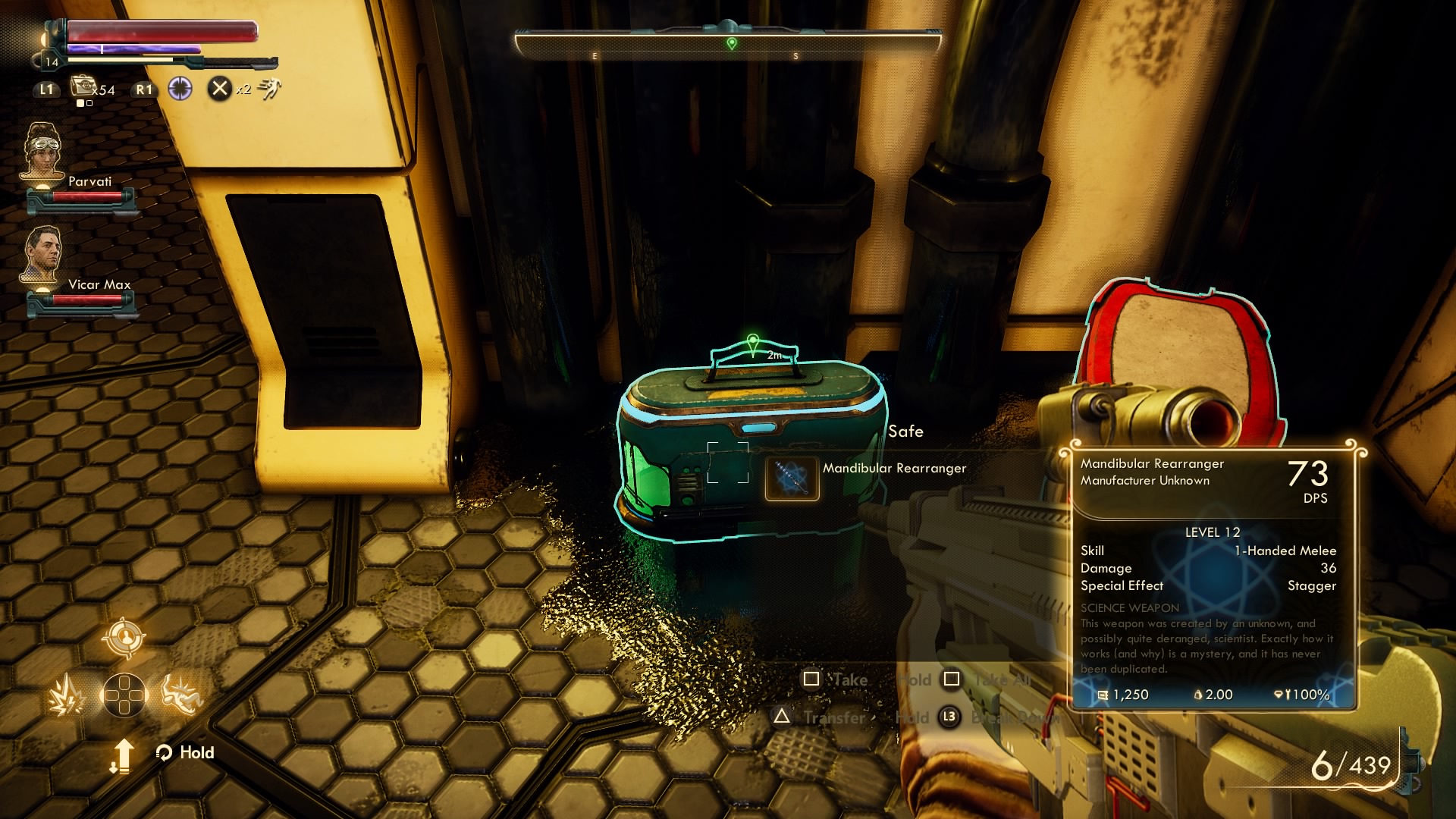 Your next steps are more difficult, however. To get info on more weapons you need to buy a Navkey to Stellar Bay from Gladys, head there, then travel southeast out of the city to the town of Fallbrook, where you’re sent for a fair few other quests too.

Here you’ll find a merchant called Duncan who you can buy two more datapads from. These lead to the final two Science Weapons on Monarch.

This is the same Abandoned Facility that you visit during the Space-Crime Continuum Sublight Faction Quest, and the Science Weapon is deviously placed.

It’s best if you bring the Doctor Ellie and Parvati as Companions for this quest because they can help out.

As you approach the Cascadia facility the door is locked tight, so head left and crouch under the wall.

Take out the marauders and follow the quest marker to the nearby building. To open the door you need to interact with the terminal in the same room.

Once inside the facility, you basically need to fight your way to the end or use devious means to incapacitate the enemies.

As you make your way through the first rooms of the facility you’ll come to a corridor where you can either head left into a larger room filled with raptidons, or go straight forward into a mined corridor with electric fences.

Shoot the mines and jump over and crouch under the fences and you’ll square up to some more raptidons. Defeat them then go through the room to the door on the other side. This comes out into a corridor filled with steam.

In this room, you’ll find a terminal that Ellie can rig to make the rest of the raptidons fall asleep and make your life much easier.

Now make your way through the rest of the lab, back through the room you ignored earlier. If you’re doing the Space-Crime Continuum quest at the same time, follow the marker to the terminal where Parvati can help siphon the gas.

Once you’re there, look for a gap in the wall just behind the terminal. 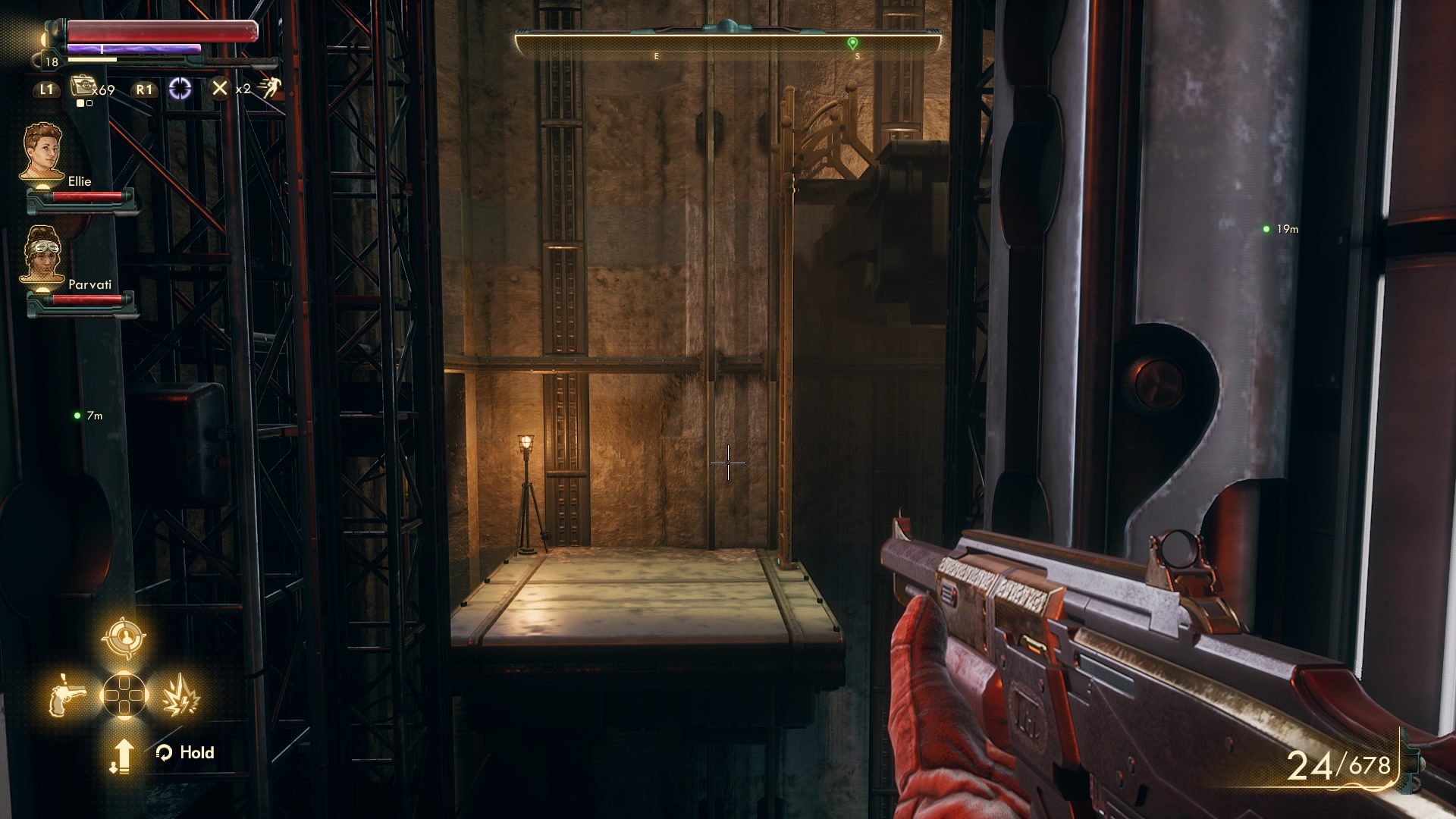 On the other side, you should see a ladder. 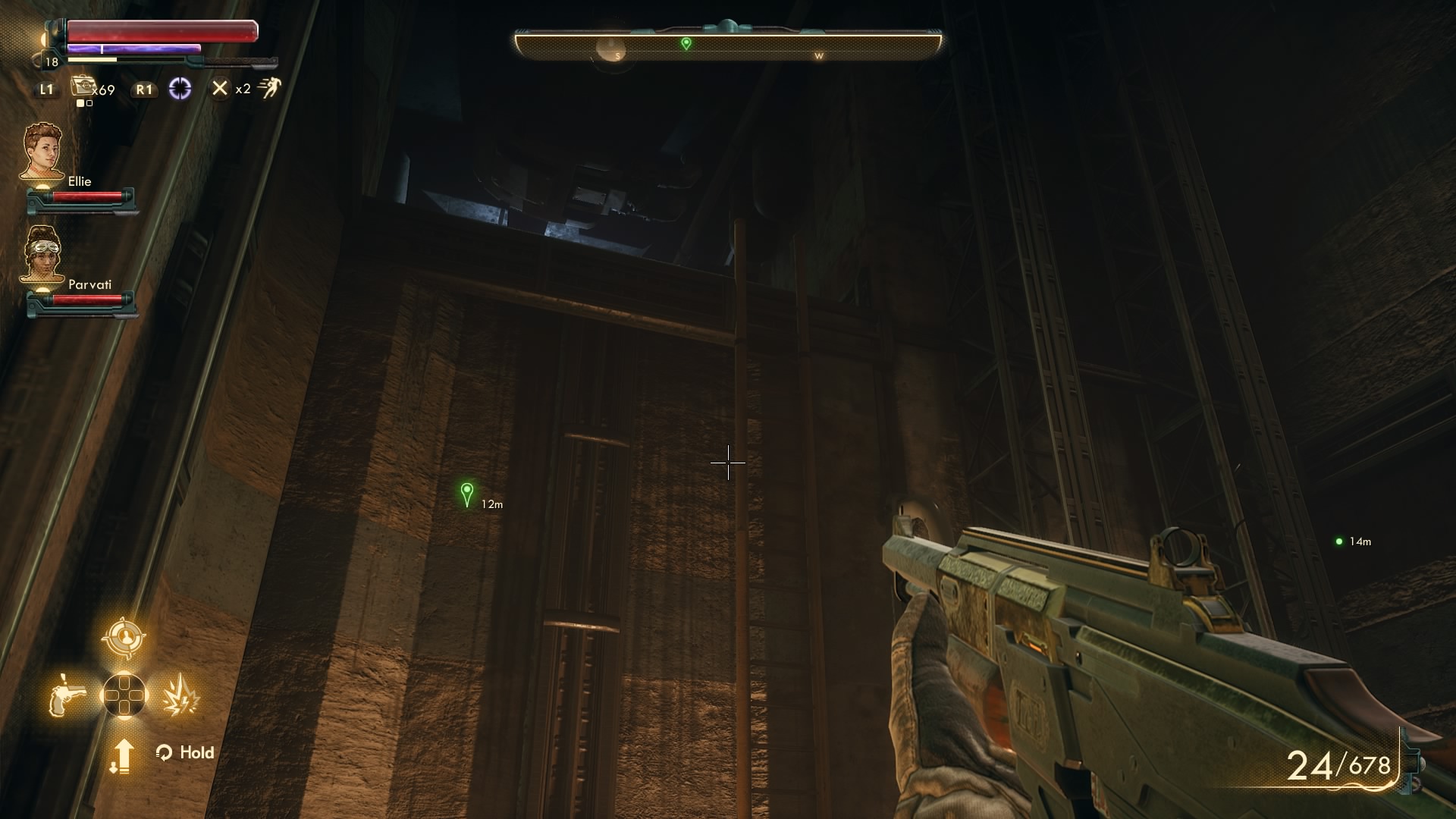 Jump across and climb up it to grab the Abandoned Lab’s Science Weapon: the Mind Control Ray. 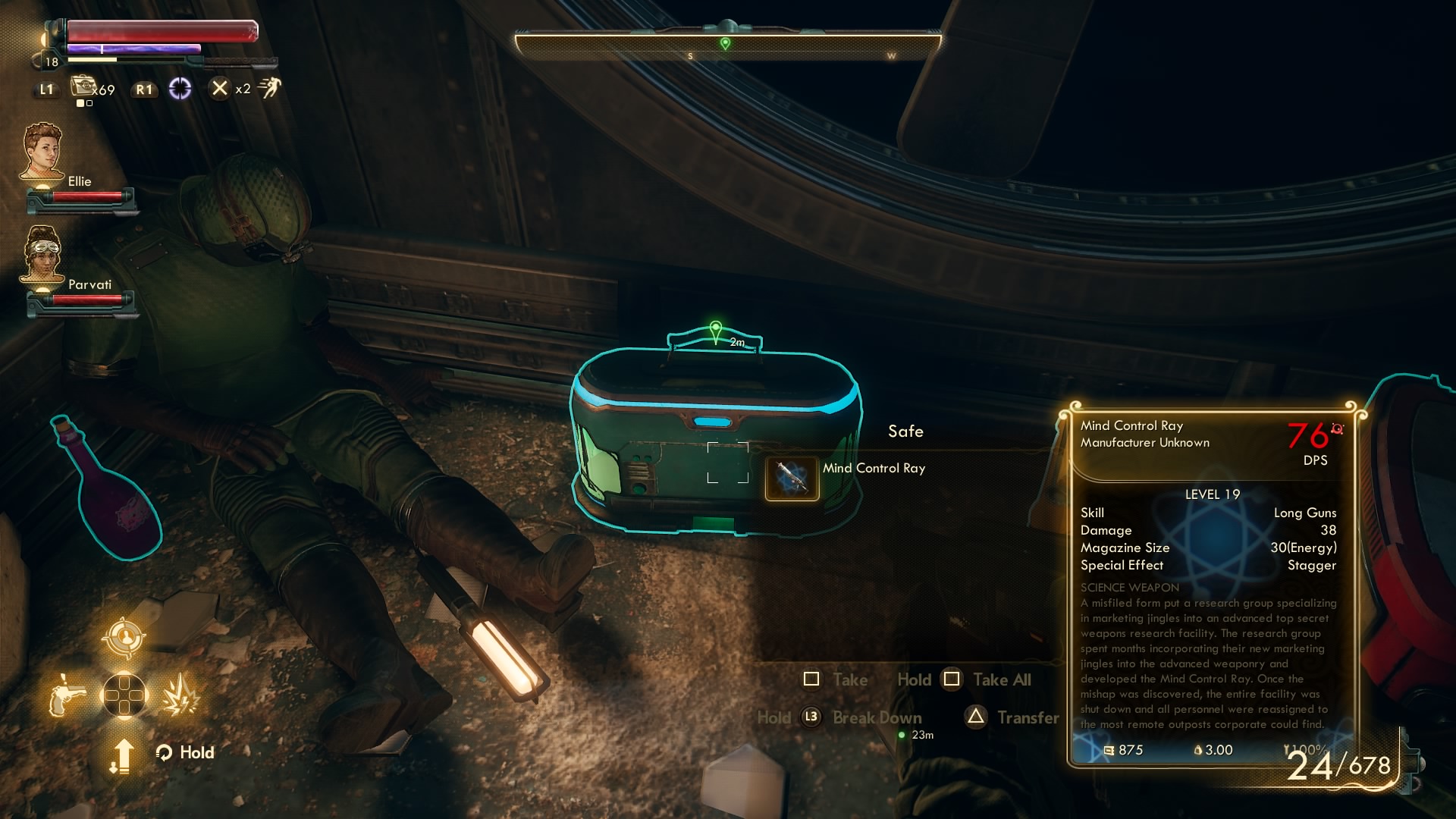 The final Science Weapon is by far the most difficult to get a hold of, and I haven’t found an elegant solution to doing so yet.

It’s not hard to find, all you need to do is head to the UDL lab in the centre of Monarch. 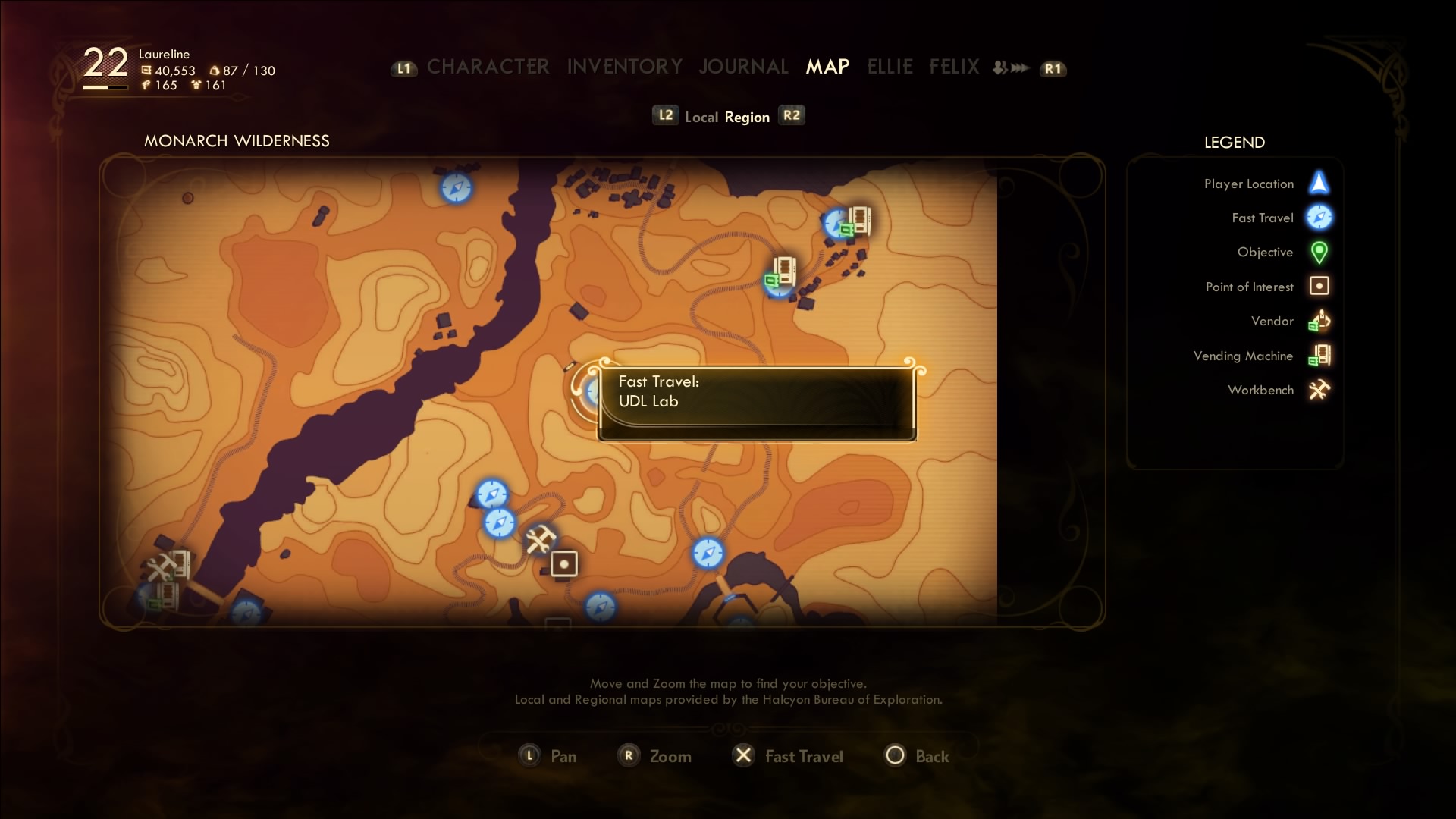 Here you’ll take out some marauders, climb up the side of the main lab building and fight your way downstairs. Here you’ll find the Gloop Gun - locked up tighter than Fort Knox. 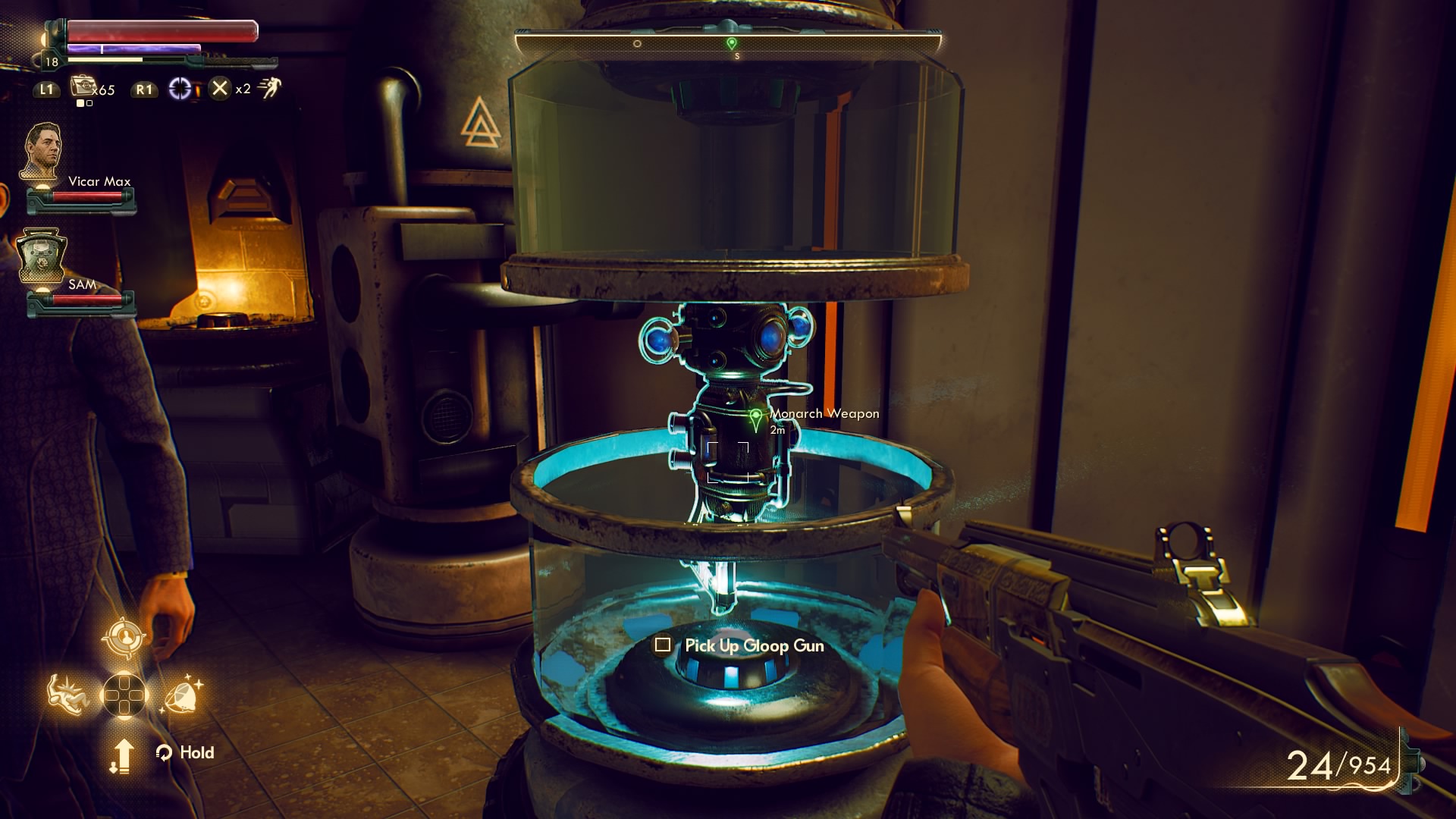 You now have 2 options. Either have 100 Hack and get a chunk of XP from hacking the terminal. 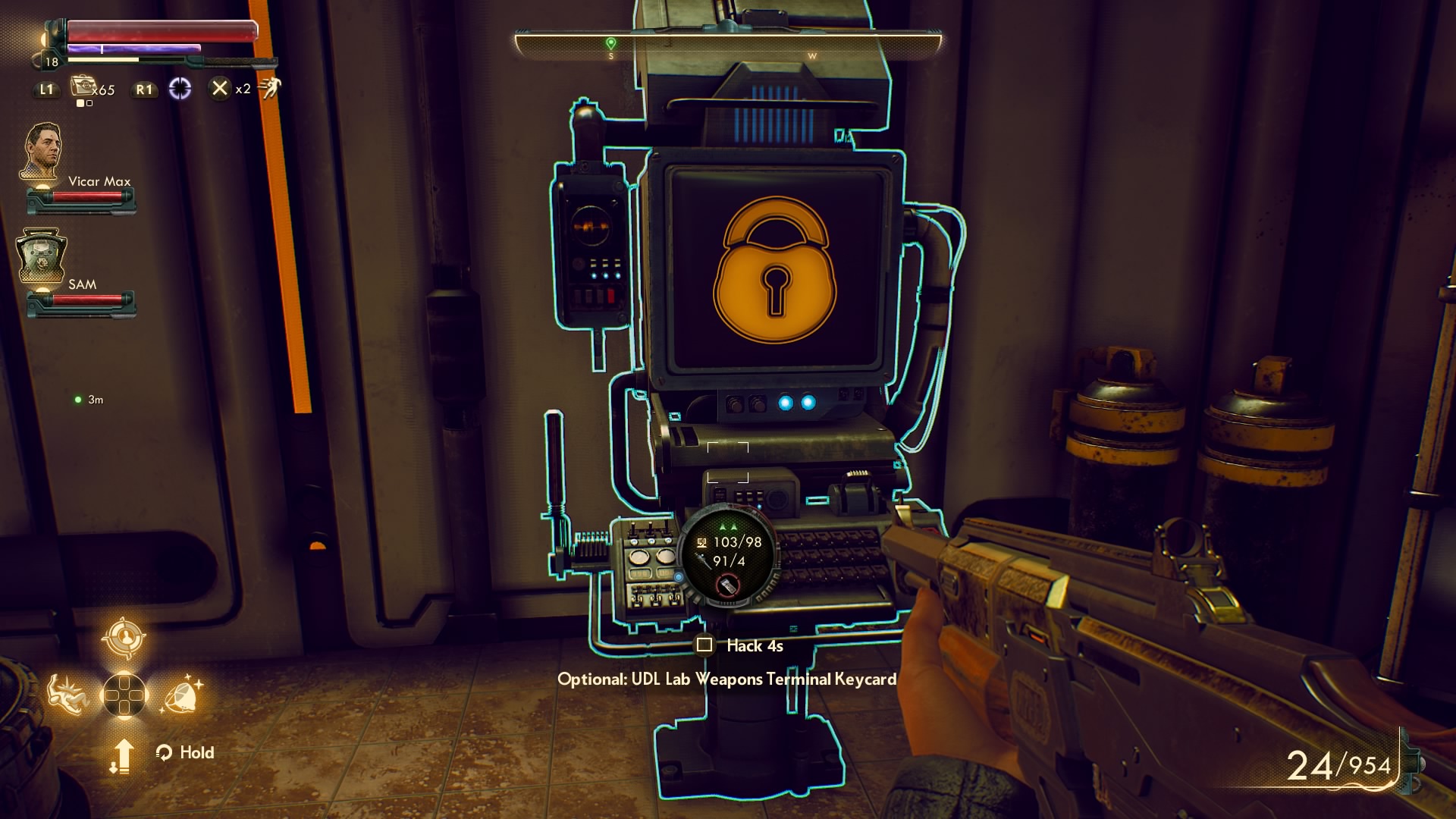 Or grab the UDL Lab Weapons Terminal Keycard, from the table upstairs. 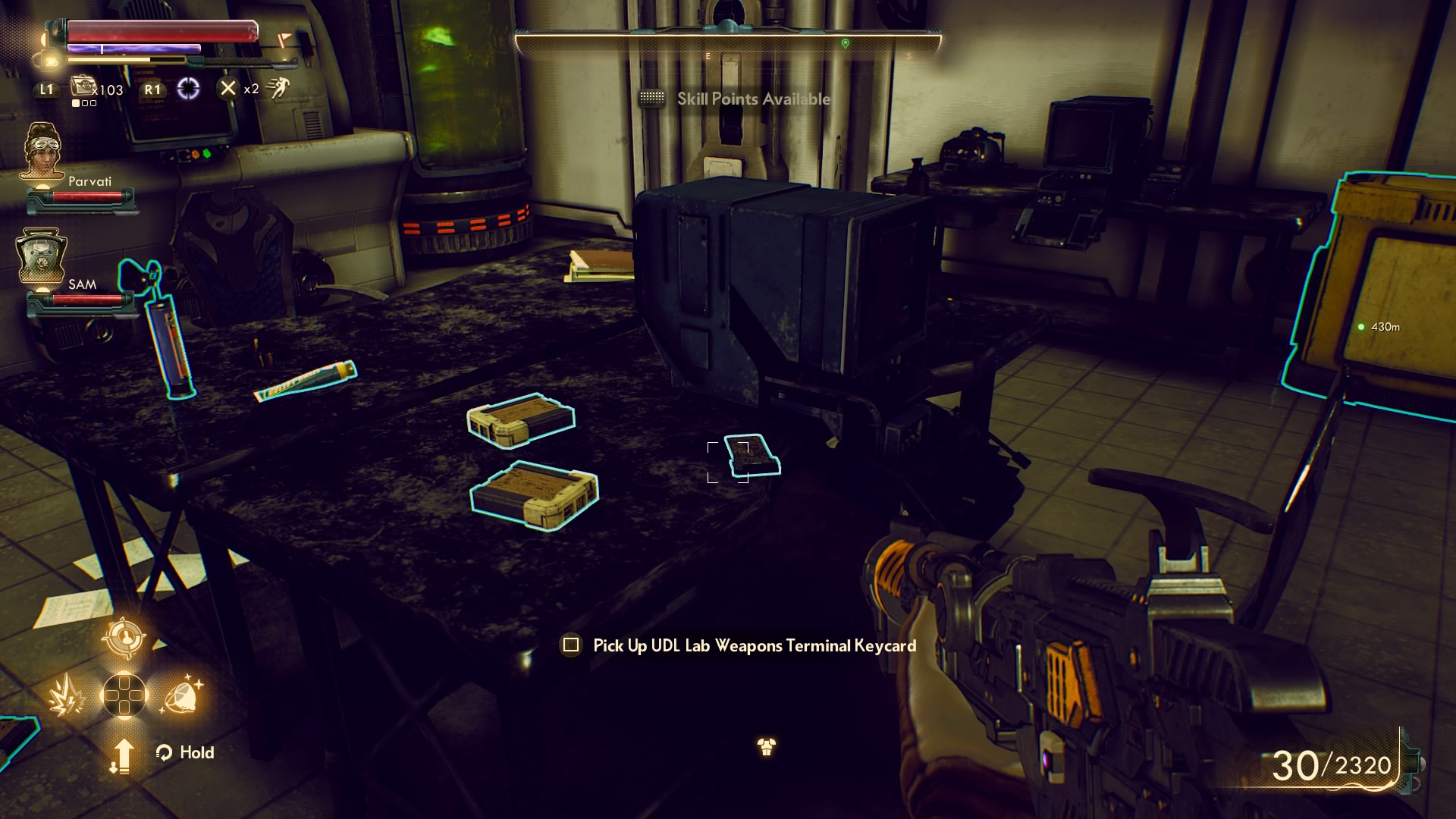 Getting to 100 Hack isn’t very difficult. You only need around 60 base Hack to get there. First off, wear equipment that buffs your Stealth Skills, bring SAM and Vicar Max as your companions and unlock Max’s Bonus Support Perk. 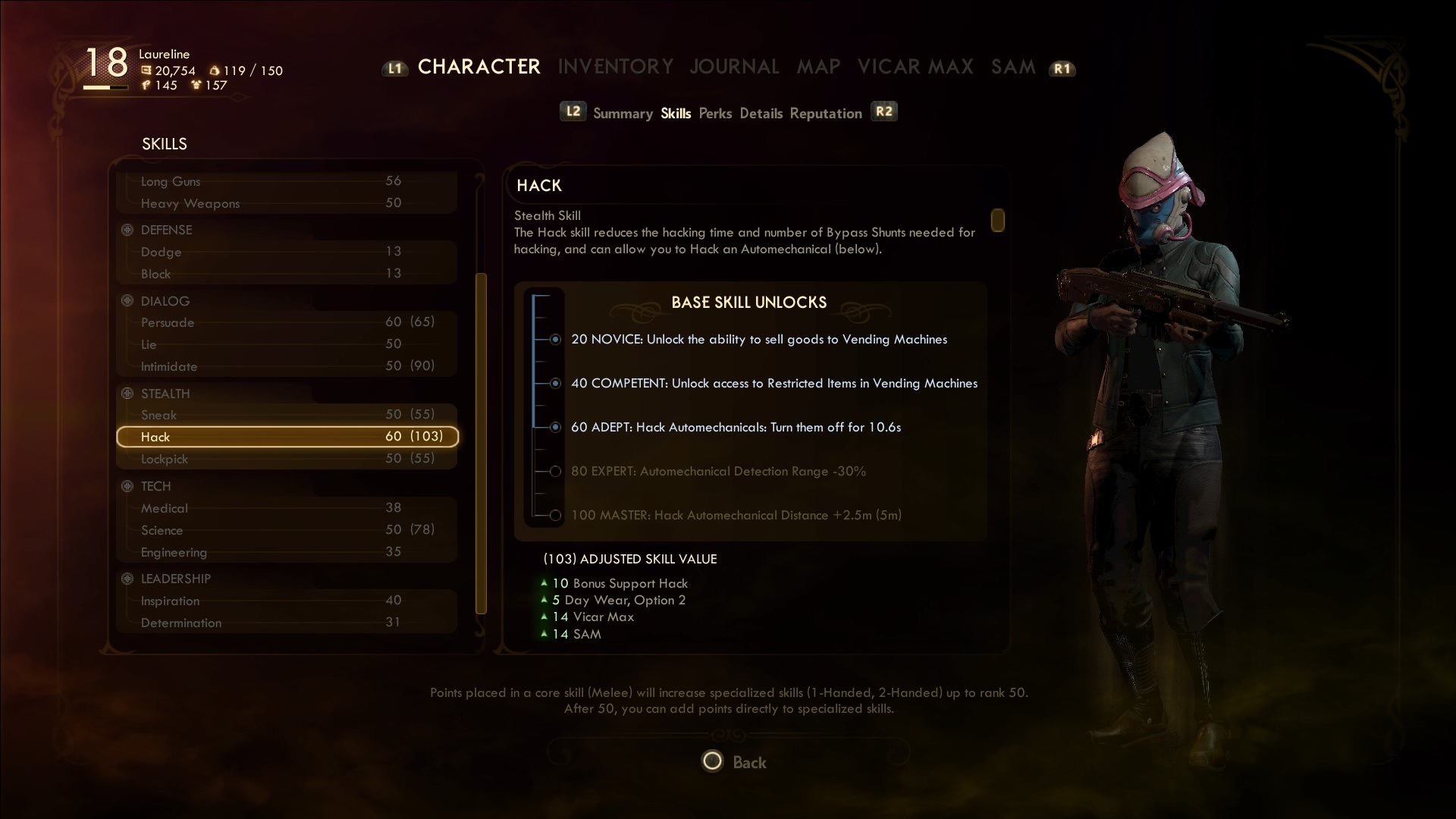 This gives you in excess of 40 bonus points - enough to grab the Gloop Gun. 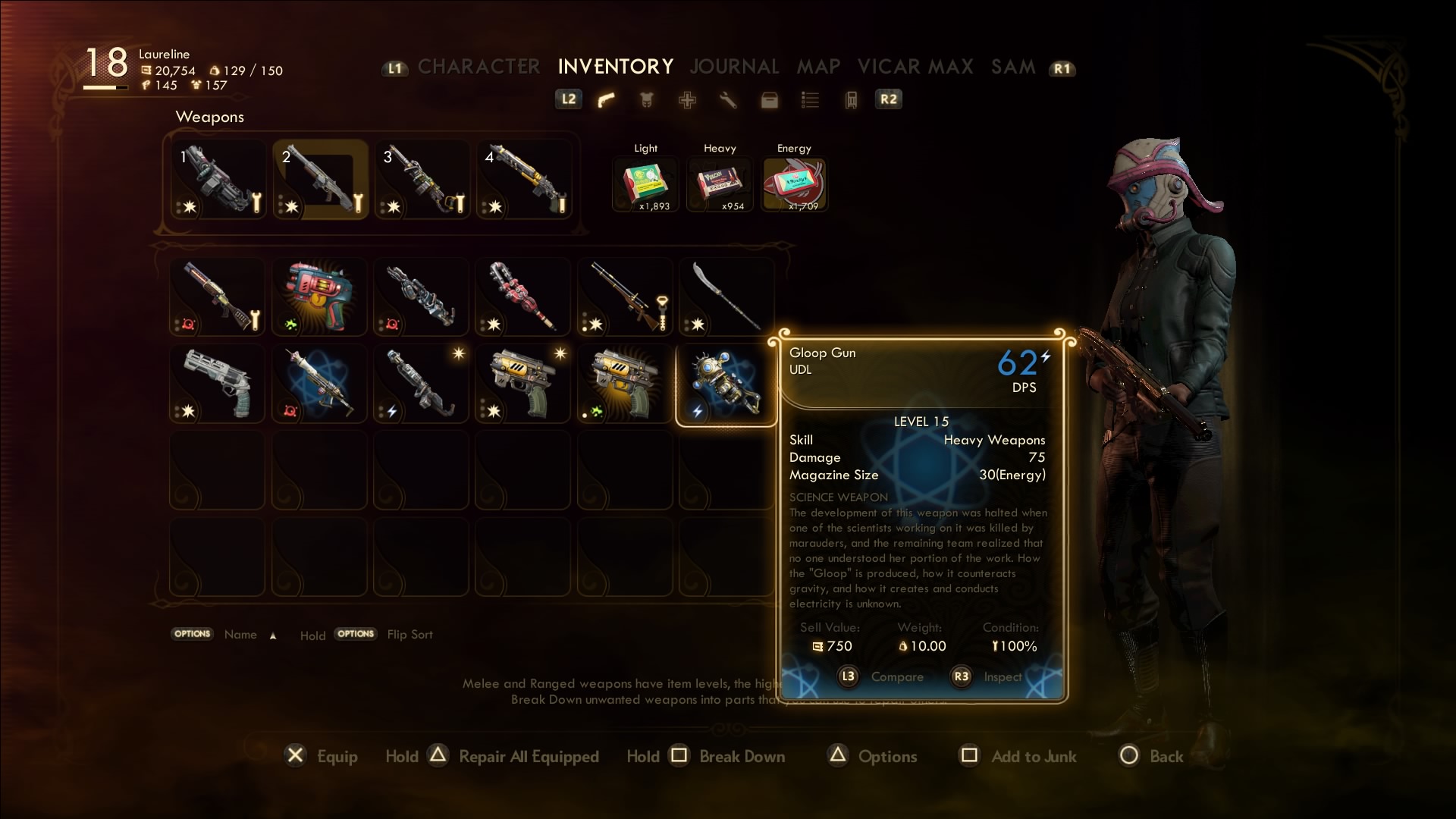 As well as Science Weapons, the are a load of unique and powerful weapons that you receive as quest rewards, or just find scattered around. Here are some of our favourites:

Now that you've found a bunch of Science Weapons, you can check out our guides on where to store unused items and how to recruit all six companions.

You can also check out our guides on how to complete the Die Robot questline and our top tips for what Attributes, Skills, and Aptitude you should pick.