This weekend in Pokemon Go: literal shots fired, teens stuck in caves, and more - all from the lack of common sense archives. 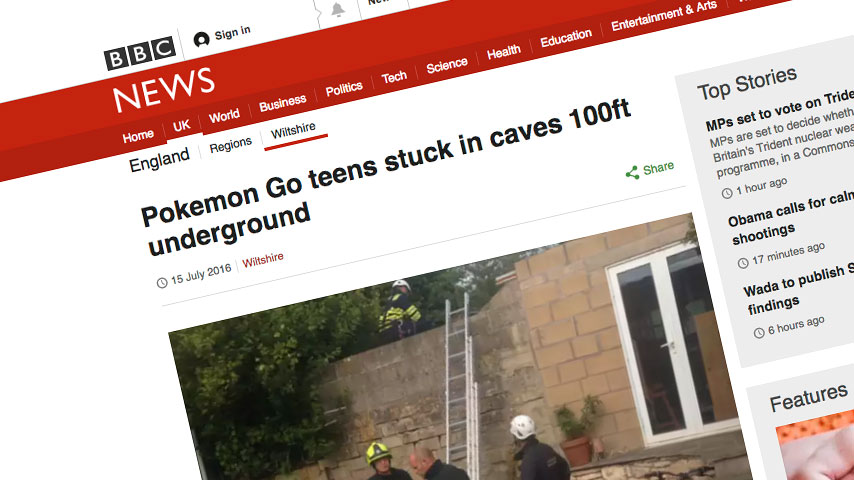 Pokemon Go continues to be a worldwide phenomenon even as eager Pokemon trainers bring down Niantic's servers over and over again. Which is kind of amazing, because at the rate these people are getting themselves into trouble it's surprising there are enough left.

Up for first prize in the Pokemon Go Darwin Awards are four teens from Wiltshire in the UK. According to the BBC, the group wandered into the Box mines, a series of tunnels and excavations, and got lost and trapped underground. They were rescued when they reached an open-air area and got a tiny amount of phone signal.

Authorities are under no obligation to enter cave systems but kindly made an exception in this case, calling upon local experts to help with the rescue attempt. The Pokemon Go trainers admitted they'd gone in looking for Pokemon, even though - ah ha ha! - GPS and phone signals don't work spectacularly well underground. Bless their hearts; not a great day for rational thought.

Even if you sty out of cave systems which will swallow your corpse for all time, you're still not out of danger: a pair of teens in Palm Coast came under fire after a local resident mistook them for house breakers. According to The Daytona Beach News Journal, the teens were out playing Pokemon Go at about 1:30am and were heard talking about whether they'd got anything.

Where you stand on the resident taking a handgun outside, ordering them to stop and then firing several rounds into their car when they drove off probably depends on your politics regarding gun control in the US, but it's pretty clear the practical lesson here is: don't play Pokemon Go at 1:30am in a country where people try to shoot possible burglars instead of calling the police. That's not wise.

Meanwhile, in New Zealand: somebody has quit their job to play Pokemon Go. This actually sounds a lot sillier than it is; according to the Sydney Morning Herald, the 24 year old man quit his job as a barista to go on a two month national tour, collecting Pokemon.

Taking two months from your hospitality job to travel aged 24 is significantly less bizarre than the headline suggests, right? Let's all cross our fingers that Pokemon Go is still a thing in a week's time - although I'm sure he'll have a great time regardless.

Finally, Nintendo Everything reports there was a Pokemon Go stampede in New York's Central Park following the sighting of a Vaporeaon, and a similar event in Washington’s Downtown Park for a Squirtle. You can observe these events in videos below.

"But Brenna," you may protest. "Surely it is not silly to try and capture uncommon Pokemon?" You are arguably correct, but I didn't want to do another post so all these poor Pokemon Go trainers get lumped in with the rest - although as a Bulbasaur fan I wouldn't cross the road for a Squirtle and am amazed anyone else would.

Trying to Catch 'Em All? Our Pokemon Go guide and information hub has everything you could ever need to know.