Microsoft Flight Simulator has an important role to fulfill as a serious tool for the real-life aviation industry - but that doesn't mean it can't find time to dazzle gamers, too.

The technology that makes Microsoft Flight Simulator tick is something truly special. A mash up of Microsoft's map data from its Bing search engine, artificial intelligence and cloud computing, the result is simple: this game's 'map' is the whole world.

That makes sense for a piece of software that is more than just a video game. This is a tool that'll likely become a new industry standard used to rack up flight hours in the process of learning real-life flying. Previous flight sims also offered the ability to explore the whole globe - but for the first time, this is a largely recognizable version of the world, all thanks to impressive new technology.

We all remember Microsoft's crowing about the power of the cloud at the start of the current console generation, but it ultimately didn't come to much. Crackdown 3, the big Xbox showcase of the technology, fell flat in public compared to mind-blowing private demos. Flight Simulator, however, is the other side of the coin: the real, tangible product enormously boosted by the fabled power of the cloud. While there are bugs and mistakes created by the AI that fills in the details, its hyper-accurate version of the world is stunning.

While air traffic control and a desire to fly comfortably will encourage you to take the altitude higher, you'll almost always be tempted to dive low over cities and interesting topographical features in order to take in the detail. I flew over parts the UK counting off landmarks: there's the white cliffs of Dover, the Houses of Parliament, and the O2, formerly the Millennium Dome. These are massive landmarks, but skimming over London revealed the recognizable digital facade of various buildings that I regularly visit, like the offices that are home to some video game publishers. Fly further north into the UK and I can find whatever I like: my home neighborhood, the nature reserve where I walk the dog, my local train station or mall.

The same is true around the world, and you can thus do a great bit of digital tourism: flying over the Las Vegas strip then off into the sunset over the Grand Canyon, taking in the sprawl of Tokyo at night when the artificial light of buildings and street lamps radiate into the sky, or circling low over the Los Angeles Convention Center while feeling a pang of longing for the structured chaos of E3.

In these moments, Microsoft Flight Simulator is magical, and it's here that this very useful tool can become a wonderful game. It's pure escapism - to head to the skies and relax, to fly over beautiful natural vistas or a man-made metropolis. 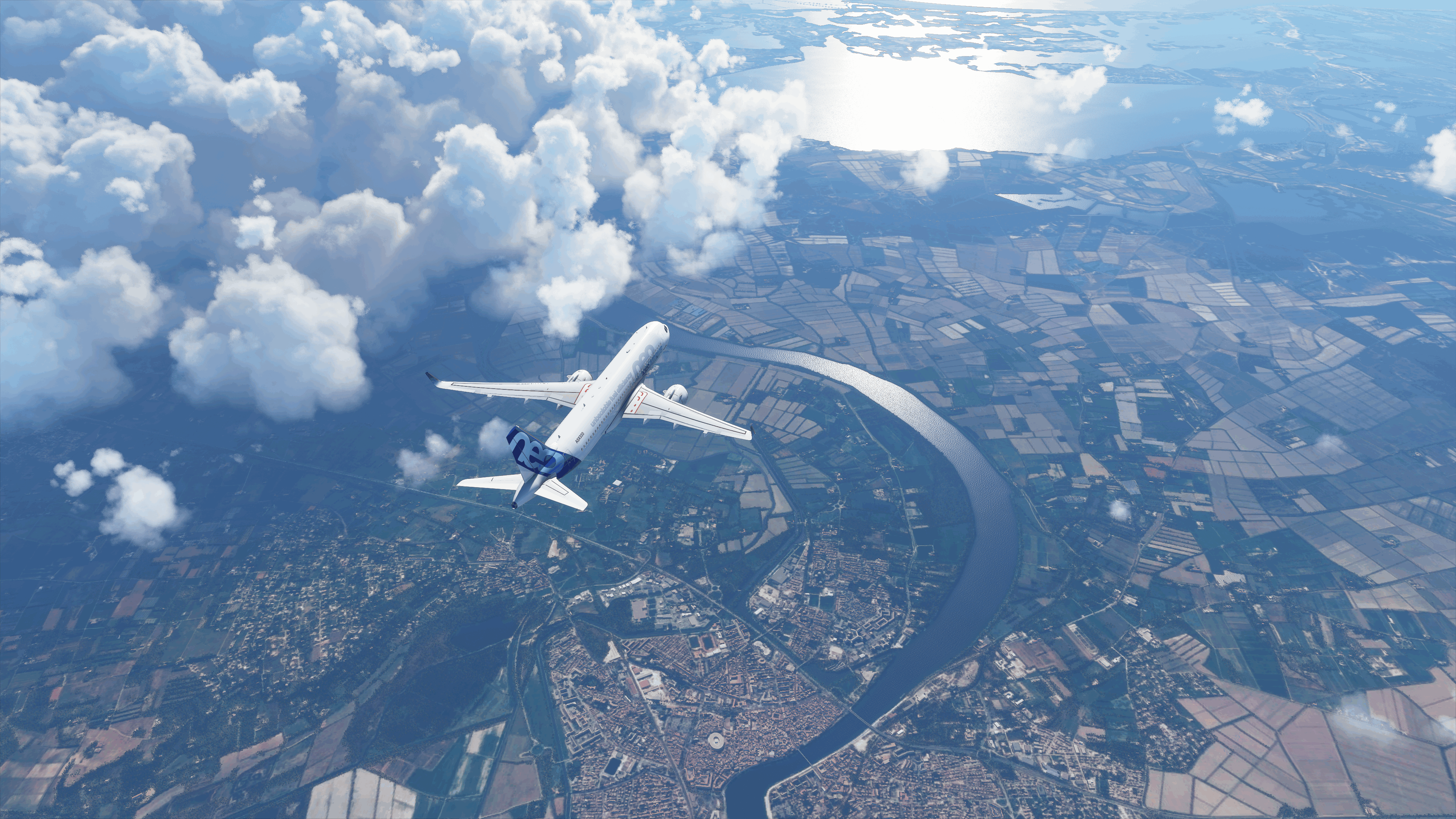 The world, if you haven't guessed, is sort of the star. Or rather, it's the glue that holds this whole experience together. Bing Maps data and photogrammetric scans are passed to Microsoft's Azure cloud servers, which then use artificial intelligence to fill in the details not present on the satellite imagery.

This means that while your house might not have the exact right shape, it will be there - represented by an AI-generated approximation. This means up-close and personal things might not be exactly accurate - but bigger buildings are more likely to be closer to reality. The AI will also fill in details like trees and determine what is liquid, adding foliage and telling the game where to place its realistic water to create rivers, ponds and the ocean.

Once you're in the skies and gain a proper altitude, the less-accurate elements of the AI's work disappear from view and what you get is a highly accurate representation of the real world. Some cities are enhanced further with the touch of developers, and there's promise here in Flight Simulator as a platform, with the developers promising updates but also supporting a marketplace where third parties can sell new content. Additional world detail or more hand-modeled landmark buildings could easily be a successful marketplace category alongside new aircraft and other additions.

Speaking of support, there's plenty already in and lots more to come. The game will be TrackIR compatible, for instance. It'll launch on Steam as well as the Windows Store and Xbox Game Pass PC. There are plans for VR support, obviously. Then there's the general expansion: more premium, hand-designed airports, more aircraft and so on, from both third and first party developers. If you can think of it, chances are the developers have considered and placed it on a long-list also; they describe this as a decade-long project.

In the cockpit, this is as good a flight simulator that there has ever been. Every vehicle is accurately represented in extreme detail. Modern hardware means things like the texture of each button, light or control element pop and are more easily recognizable. Meanwhile, the accurate world is supplemented with gorgeous lighting effects that mean the view from behind your instruments is pretty much always a lovely one - even if it's open sky. The sensation of the glow of a city drawing nearer on the horizon as you fly on a dark night is quite something.

The cloud is used in other ways, too - to calculate things like the way air flows around natural structures like mountains to cause pockets of turbulence, or streaming in air traffic, time of day and weather from the real-world. 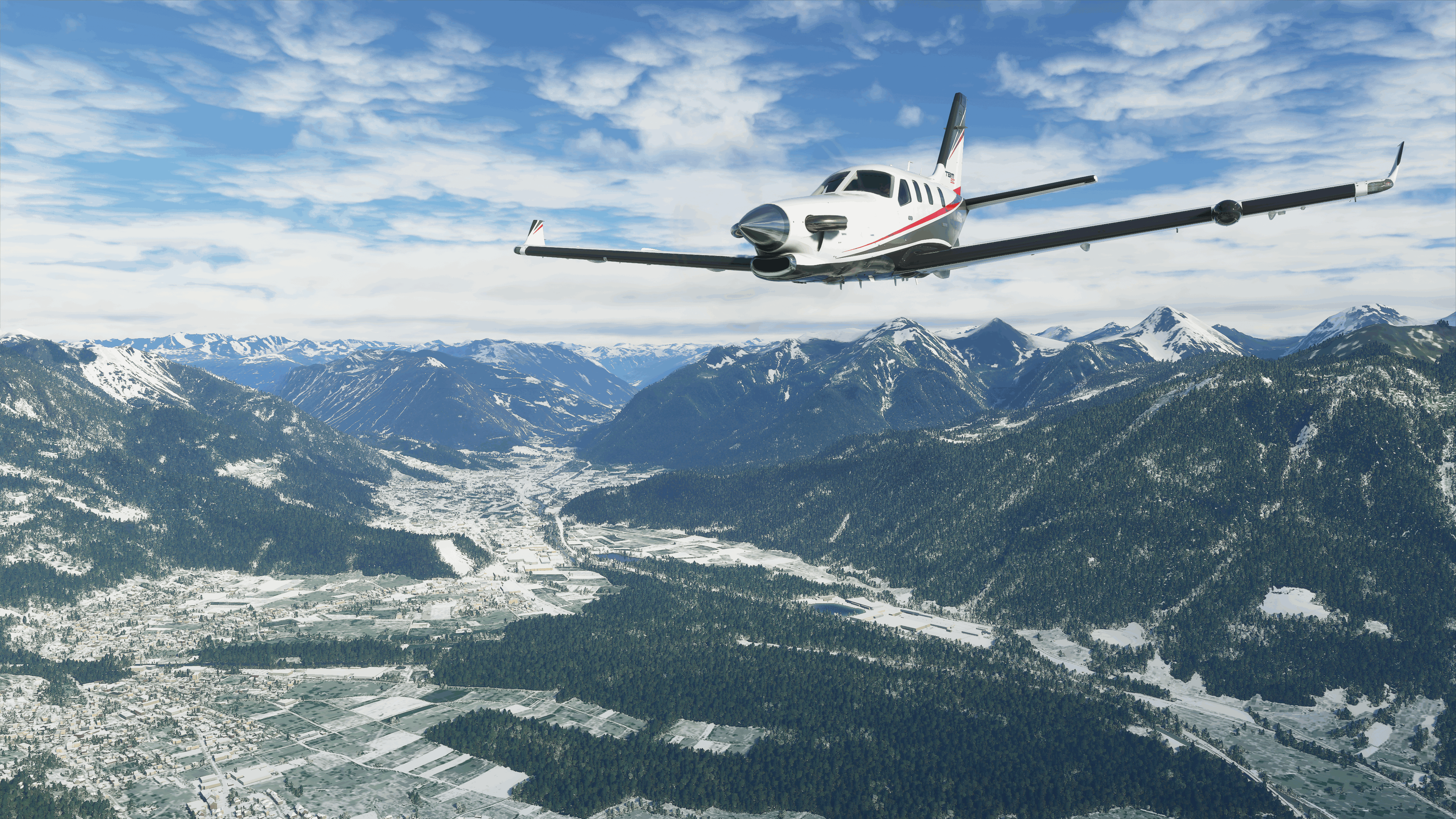 An internet connection is required, but the level of detail borrowed from the cloud scales based on your connection speed - meaning less detail but no less playable for those on slower connections. With that said, I tested at a variety of network speeds and found the level of detail to pretty much always be acceptable, though it did vary. Given the nature of the game, asking for a half-decent connection doesn't seem too cheeky. You'll want to play this at a desk, not on a laptop on the train.

I've been playing Flight Simulator with a range of accessories including a Thrustmaster TPR Rudder and the Honeycomb Alpha Yoke & Switch Panel. The game is obviously most at home with accessories like these, which companies like Logitech, Thrustmaster and Honeycomb are all over - but you can also play with a mouse and keyboard. There's a range of assists, with the idea being that regardless of your competency, you can enjoy flying.

Part of this, the developers explained in an introduction to our hands-on, is because a lot of the development team began to learn to fly as part of creating this title. They recreated the real-world experience in-game. When you first begin to fly, your teacher takes control of pretty much everything but the yoke away from you - so the flight simulator assists go that far.

The more assistance is turned off the more it's on you, until you're at full seat-of-pants, mistakes-are-deadly level. Either way, it's good, approachable stuff - and the tutorials are solid too.

There's much else to talk about and look at in flight simulator as I get access to more of the game and for longer nearer to release. But in a time that few of us can hop on a flight and cross the world, Microsoft Flight Simulator feels pretty perfectly timed - and its canny use of new technologies work to easily make it a worthy and brilliant successor to its genre-defining predecessors.

Microsoft Flight Simulator releases for Windows Store, Xbox Game Pass for PC and Steam on August 18. As we get closer to release, we'll have more thoughts and video for you.