PlayerUnknown's Battlegrounds has been the most popular game on Steam as early as just a couple of month after its release in March, 2017.

Since the moment PUBG first hit Steam Early Access, the game's player numbers never stopped growing. This is a stark contrast to the majority of games on Steam, which all inevitably decline after launch day/week spikes.

For these games, the graph usually points downward the older they get, but not PUBG. It's the only game in recent memory to constantly go upwards, sometimes by nearly 300%.

Something happened, though, because for the first time since March 2017, PUBG player numbers declined. The player base dropped by 1.74%, according to stat trackers Steam Charts, which pulls its data from the Steam API.

In raw numbers, that's a bit over 27,000 players. This many players dropping out would be a disaster for any game, but it's barely 2% of PUBG's player base.

Despite what you may think, this number is not insignificant. The game saw a 10% growth between December 2017 and January 2018. In fact, this 10% growth is among the lowest for PUBG, which typically resides in the 60% range. Going from a 10% growth to a decline is not a good look.

If you look at the growth rate for PUBG over the past six month, you'll see that it all started with November 2017, when the game achieved a growth rate much lower than the previous month (22% vs 64%). 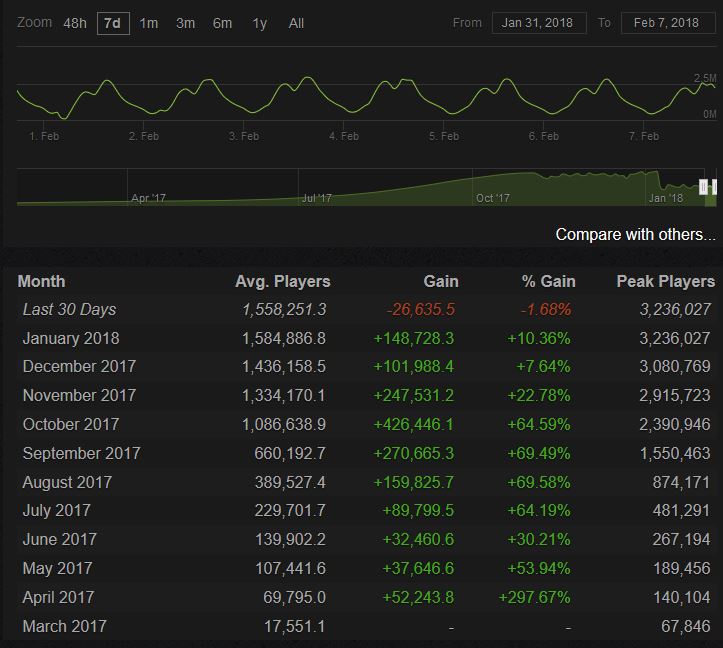 So what happened? Part of this could simply be players losing interest. There's only so much PUBG you can play, after all. But there's also the matter of Chinese players, who have been a major driving force in the game's growth all those months ago.

According to Steam Spy, the game's growth in China stopped at the end of January. It's hard to say why, but the upcoming release of Chinese-localised version of PUBG - published by Tencent - may have something to do with it.

PUBG Corp's fight against cheaters may also have had a knock-on effect on the number of them willing to re-buy a copy after getting banned. Whatever the reasons may be, it's certainly disappointing to see before even the first anniversary.