Amid review score controversy, Brenna Hillier takes a look at the history and future of Homefront, THQ's big bet on the triple-A shooter bracket.

VP of core games Danny Bilson is the willing face of the "new" THQ. In the past year he's masterminded some large signings for the firm, such as Guillermo del Toro’s inSane and Valhalla's Devil’s Third, as well as heading the announcement of THQ Montreal. Homefront is seen as Bilson's first major release as studio boss.

Passing meekly between two surprisingly intimidating, uniformed KPA officers and into THQ's Sydney Homefront review event today, I realised why the local rep had been so insistent I attend.

Homefront is, in some ways, just another shooter - but it's another shooter that THQ has bet the farm on, and the publisher is fighting against all expectation to get enough people to take a look to discover its uniqueness.

THQ has big plans for the future in general. In the publisher's Q3 financials, CEO Brian Farrell said fiscal year 2012 would be the company's strongest in terms of core releases, and expects to release 1-3 core titles per year for 360 and PS3.

As the number of core publishers thins down, competition for the revenue generated by an increasingly diverse demographic heats up. THQ has its eye on a top spot, up there with leaders Activision and EA. It's cutting down on the steady earnings of licensed titles in favour of chasing the big leagues - original franchises.

Homefront may be the engine that could propel the publisher into those gleaming ranks.

THQ has thrown resources at Homefront like it's sitting on a pile of gold. The publisher backed its expensive New York-based studio, Kaos, through three long years of development, and threw caution to the wind by shouldering the cost of dedicated servers - not just for PC, but for both console versions - and even bringing servers to the notoriously unprofitable but ping-deadly Australia.

Of course, no company as large as THQ, answerable to its shareholders, would throw all its eggs into one basket - especially not a basket labelled "original IP" in the deadly shooter market.

"Our whole world isn't around Homefront," VP of core games Danny Bilson said in January, adding that good games are his company's "only strategy".

"Are we dead? No," Bilson commented.

"We've got some unbelievable stuff coming right after those. Every quarter we've got a major game for the next three years. We've been building a solid line-up. It's a long investment.

"What does it mean for me personally? Probably you won't be interviewing this guy next year," he added, ruefully.

Beyond those sales, the analogs between Homefront and Dead Space become clearer. In each case, a publisher has thrown its weight behind a new, untested IP, trying to establish one of the long-running, near-annually reliable franchises so beloved of shareholders.

EA's gamble seems to have paid off, with CEO Jon Riccitiello confirming Dead Space 2's sales had outstripped its precursor, and predicting the series to hit the big time - 5 million sales - with a planned third entry.

THQ clearly believes Homefront can, and will, do something similar.

Bilson's not expecting Call of Duty sales, but he's certain THQ is "in the conversation", stating on multiple occasions that a sequel is almost certainly on the cards, and portioning off staff from its new Montreal studio to assist Kaos in future development.

Analysts Colin Sebastian and Doug Creuts believe it, too, with the former predicting 1.5 million units shipped in launch week, and the latter expecting "decent" if not stellar sales. 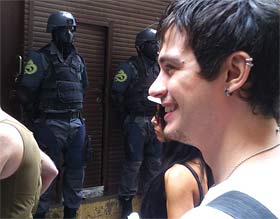 In what little time the game has had to perform, it's become THQ's most pre-ordered title and outstripped expected server demand.

Stand up and fight

Nobody knows, right here, right now, whether Homefront is about to lay a golden egg for THQ. The game's single-player has come under critical fire for its brevity; its multiplayer has been called generic, despite a unique on-the-fly purchasing system.

Nevertheless, people are interested. Yes, the story is controversial, and THQ can and should milk that for every last ounce of moo, but putting aside its troubling politics and sensationalist alternate history, Homefront has an atmosphere, fuelled by the age of terrorism, that's obviously proving compelling.

Sitting in a badly-ventilated warehouse with a heavily-armoured, faceless grunt breathing over my shoulder in Sydney today, navigating a battlefield littered with the debris of everyday life, we low-level newbs faced off against US reviewers with a week's experience - and thirty or forty levels - under their belts.

Such overwhelming odds are all part of the product, and its that spirit that Homefront captures: that of the underdog. I wonder if that same tension is found inside THQ headquarters this week?

Homefront is out now in the US, and releases in Europe on Friday for PC, PS3 and 360.