This is the essential knowledge you need to play FIFA Ultimate Team, along with the best ideas for constructing your squad.

What is FIFA Ultimate Team? Essentially, it’s a collectible card game in which every card is a player that can be added to your team. The basic goal is to build a team made up of the best possible players that you can then take online to defeat other FIFA Ultimate Team (FUT) managers to win trophies, prestige and the currency required to acquire more cards.

Think of it as a digital version of collecting football stickers, only in this case you can play actual matches using the players printed on those stickers.

To put it mildly, FUT can be daunting for players new to the mode and so we’ve put together a handy guide to help ease you into the process and prevent you making rookie errors that can slow down your progress.

This is the first part of that guide, and you’re best thinking of what’s here as an intro to the other sections that are more focused on specific ideas and elements of the game.

Ultimately, though, the best advice we can give for newbies is to experiment, be very careful with your in-game currency and don’t get disheartened if you don’t get Messi and Ronaldo in your team on day one. 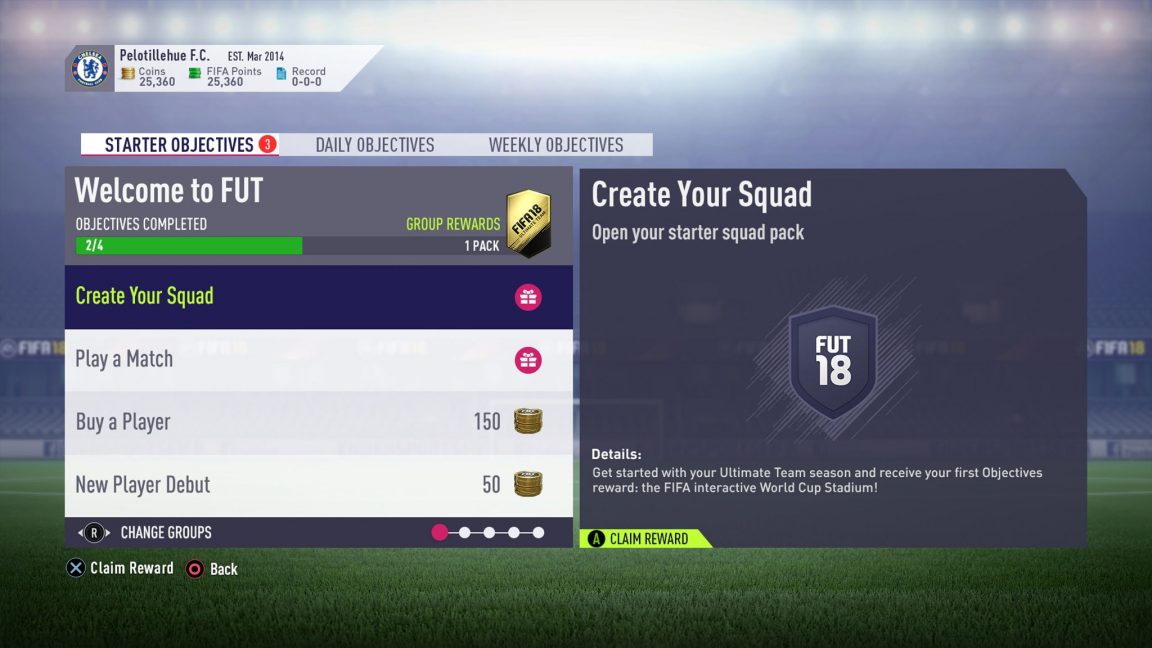 What to do first: Squad Building, how to get easy FIFA Coins

After you’ve gone through the required logistical steps, such as naming your team, it’s time to start playing for real. You’re given a starter pack of 34 cards that includes enough players to put together a squad, as well as kits and badges for you to deck your team out to your own liking. Ultimately you want to be building the best team in the league, but you have to start small to begin with.

The players you’re given here are nothing special, so don’t expect to be playing as a World Dream Team from the start.

However, these players are good enough as a means to get you started on your journey. Our best advice at this moment in your FUT career: Do not play any matches yet.

Instead, focus on completing the objectives that act as a basic tutorial in how to play FUT and navigate its menus. These provide worthwhile rewards at this early stage and allow you to start hoarding rewards and currency for the future.

You should also spend some time completing the new Squad Building Challenges. Your starter cards are more than adequate to immediately complete a good number of these and, again, they provide you with rewards that are very useful at this early stage – particularly in the form of FIFA Coins…

FIFA Coins is a form of currency that you earn by playing FUT, winning matches and completing objectives. FIFA Points is a currency that you can buy using real money with a view to building a great team more quickly. You don't want to spend real money if you don't have to, so we've put together a very efficient guide to earning coins quickly and easily.

Packs are your bread and butter when it comes to adding new players to your team – just like in other collectible card games, you buy packs without knowing exactly what you’re going to get.

Unless you’re made of money we’d recommend avoiding FIFA Points until you’re more experienced. Not only are they not cheap, but you run the risk of wasting them if you’re not clued up on how the finer details of how FUT’s systems work. 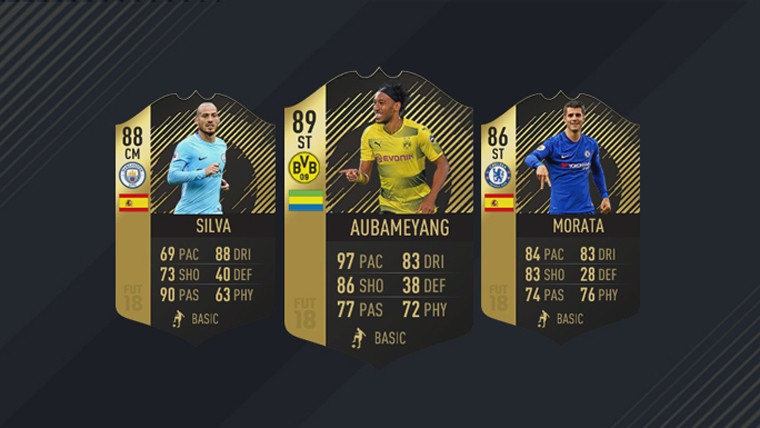 There are four categories of card that you can obtain from packs: players, staff, consumables and club items.

Players are self-explanatory. Staff includes managers and coaches who boost your team in various areas such as goalkeeping or attacking, whereas consumables cover everything from healing injured players to extending their contracts. Club items feature the likes of new kits, stadiums and types/brands of football that give your team a visual identity on match days.

It’s important to make sure you’ve got a good range of staff and consumables in your pocket at all teams. Without them your players are not going to perform to their full potential or, worse, you might find your star player’s contract has expired before a big game.

The players themselves are broken down into three basic classes: bronze, silver and gold. Silver players are more skilled than bronze, gold more skilled than silver. Your starter pack players will almost always be exclusively made up of bronze players. If you’re lucky you’ll have a silver or two included in yours. 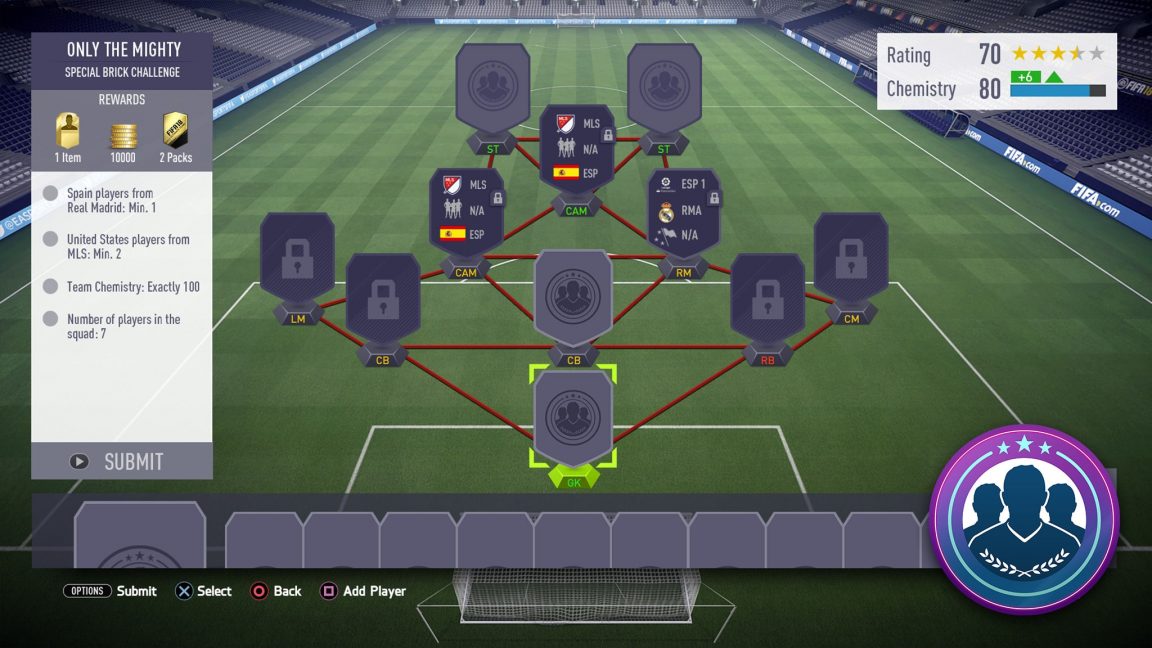 To make you salivate at what your team might eventually look like, FUT gives you a selection of top players to add to your team at the very start. Don’t get too excited: you’re only getting this player on loan, meaning you can only use them in a limited number of matches and you cannot extend their contract.

It’s at this point that you want to start planning how you’re going to construct your team. In FUT you are looking to build not just a team of big names, but a team that has good ‘chemistry’. Chemistry is the glue connecting players to one another; the better the chemistry the better the player will play in matches. You can read more about it in-depth with our FIFA 18 guide to chemistry.

Having teammates be of the same nationality or playing in the same league as one another achieves high chemistry. If they play at the same real-life club then that’s even better.

When picking that superstar player to get in on loan, then, you need to think about their nationality, league and club as they will become the starting point for future growth. Pick Dele Alli if you want to put together a team based around stars of the Premier League and/or the English national team, or Gareth Bale if you want to focus on the Spanish La Liga.

The earlier you start planning the fewer problems you’re going to run into later down the line in terms of team chemistry and maximising the players you’ve brought into your team.