Among the many new creatures designed by Game Freak in Pokemon Sword and Shield lie fake Pokemon, impostors.

Sword and Shield introduced a variety of new mons, including a much-needed Linoone evolution, Obstagoon, and a not-so-much-needed Mr Mime evo, Mr Rime. One of the brand new Pokemon the pair of games introduced, however, was Sinistea, the Ghost-type teapot who evolves into Polteageist.

According to Polygon, however, it's actually possible that the Polteageist you've been training is a downright fake.

You see, there are two types of Polteageist in Galar. The first is the real deal, a proper ghosty teapot through and through. The second is something else pretending to be a ghosty teapot, although it's not quite clear what this something else is — which, if you ask me, is all the more ghostly anyway. 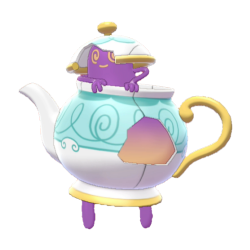 The Pokedex entry for Polteageist actually draws attention to this phenomenon:

"The teacup in which this Pokémon makes its home is a famous piece of antique tableware. Many forgeries are in circulation."

One Twitter user decided to take said forgeries into their own hands and figured out how to spot a fake Poltea set:

I hate myself for spending time on this but here’s the forged vs not forged difference of sinistea. Enjoy pic.twitter.com/N1uY3R3Yla

It's strange to realize that you might have caught a fake Pokemon without even knowing it, but rest easy: fake Polteageists are such legitimate fakes that their stats are identical to real versions of the recently introduced Pokemon. It seems this is more so an interesting piece of lore than something that actually affects play, so unless you're a Polteageist elitist with no room for incognito ghost teapot impostors, you should be totally fine.

You can check out our Sword and Shield review here, or even look into how a modder is adding cut Pokemon back into the games.