We all knew something was going down with Diablo at BlizzCon: turns out it was a mobile Diablo game, and it was playable on the show floor.

In stark contrast to the remastering of Warcraft 3, Warcraft 3: Reforged, Diablo Immortal is truly a step forward. Where Warcraft 3: Reforged makes the mistakes of the past again in a chase for a pure, nostalgic experience, Diablo is moving track to, perhaps, where it best belongs.

For those who missed the announcement, Diablo Immortal is the newest entry into the Diablo franchise from Blizzard, who have directly partnered with Netease for this release, and brings it to mobile devices. Exactly what mobile devices is unclear, but it’s described as a fully fledged action RPG, all the bells and whistles of Diablo. And, to be honest, it is. 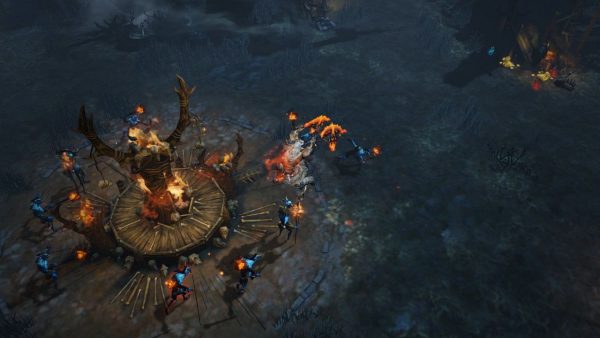 The reaction to the announcement has been less than positive online. The subreddit is not particularly happy. That’s putting it lightly, anyway - look for angrier comments and you can really see the dregs of the internet. But having played Diablo Immortal, it all feels like a reminder of how much the internet likes to judge before it has the full picture.

The BlizzCon demo for Diablo Immortal was, admittedly, limited to three classes, without the ability to change skills, and (perhaps crucially, given Netease’s involvement) no inventory management. In that demo, though, the gameplay proved something: this is Diablo.

It's most like Diablo 3, unsurprisingly, but Diablo nonetheless. The claim of it being a fully fledged action RPG is accurate, and on the relatively large phone screens of the test devices (the size definitely helping, smaller phones will suffer, something that needs to be discussed as time passes and we get closer to a release), it played well.

Tap the big button to attack, tap another and drag to perform a flying kick, hold one down to charge a projectile. The skills aren’t all the same as previous games, but they’re designed for this control scheme. Simple yet effective. You won't binge it for a whole day, that's not what mobile games are for, it's suited to bursts of demon killing. 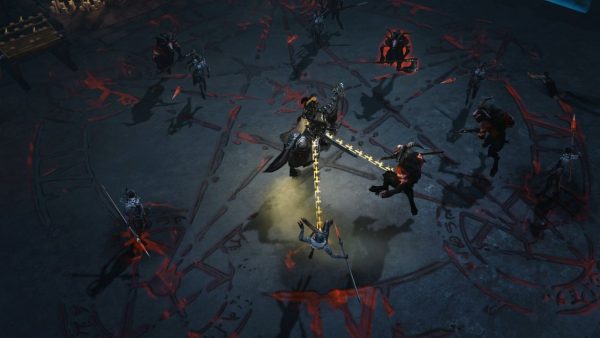 Because of that, it works well. It has been designed for phones, for the limited space and precision. Flicking a finger in a direction to fling your character over at an enemy makes for a great way to play Diablo, the imprecise nature of phone controls doesn't matter when cooldowns are short and abilities are strong, mobile, offensive actions. The limitations - and capabilities - of a phone have clearly been taken into account.

Then there’s the “massively multiplayer” element to the game. Dropping in and out of games is easy, and roaming the world you’ll find other players scattered about, at BlizzCon this simply happened to be the people playing the game a few feet away. You’ll always have someone to play with, even if it's a stranger.

That results in dungeons to play together, with the demo showing off a boss that highlighted the fast movement of Diablo Immortal as you were tasked with dodging in and out of abilities rather than kiting foes back. You’re offensive, weaving between attacks, rather than backing away slowly.

Then doing that in a group just makes it even better. The whole gang, darting around, avoiding attacks and dealing damage together. Diablo 3 suffered from an issue at release where abilities just weren’t interesting, a cohesive moveset was hard to find. Diablo Immortal feels like it has cracked that, by focusing so much more on movement and quick, snappy abilities aimed with the flick of the finger. 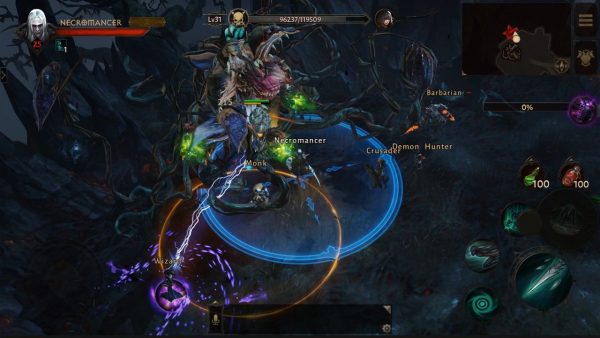 So you have the gameplay, you have the social element. What we haven’t seen is the loot. Interesting legendary items are going to be a necessity, and it’s unclear what the loot system will even be. Enemies dropped items in the demo, but specifics of how it will work are unclear. In the demo, exact numbers were replaced with a green arrow, as if to say "Yes! Equip me!" rather than giving you more direct control over the build, only giving you details after equipping.

There’s legitimate concerns for Diablo Immortal. Mobile games are famous for arguably predatory practices regarding free to play games, and the lack of specifics in the payment model and what the inventory system involves means it’s important to be wary of what the final product’s monetisation will be.

Endgame content, progression systems, we don’t know a huge amount about Diablo Immortal yet. But everything shown so far - the control scheme, the combat, the social element - is indicative of the next generation of Diablo being fantastic. Having played it, the online reaction is wholly unjustified, and people should absolutely be excited instead.

Games must continue to move forward. Diablo needs to move on to a new generation - with a healthy loot system (which, given the Auction House at Diablo 3’s launch, it’s fair to be a little cynical here), this is the new generation. A new generation, a new platform, a new brilliant Diablo - if the other pieces fall into place.