There's a new Season Pass Exotic weapon to get your hands on in Destiny 2, so let's take a look at what you'll be doing.

Alongside six weapons from previous Shadowkeep seasons being added to the loot pool, there's a new Exotic available for those who own the Season Pass in Season of Arrivals: the Witherhoard Exotic Grenade Launcher.

It rolls with the Intrinsic Perk Primeval's Torment, where projectiles fired by it Blight the target or nearby area on impact. It also comes with Break the Bank, where Blighted targets take damage over time and Blight the nearby area on death. This means you can effectively one-shot really powerful enemies and it is beautiful to see. 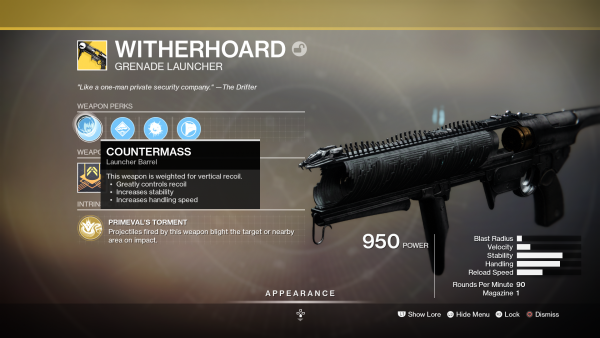 Destiny 2: Season of Arrivals - How to get the Witherhoard Exotic Grenade Launcher

If you’re a Premium Season Pass holder, head to the Seasons screen to view your rewards. You’ll see that you have a Premium Rewards box - in my game, it was a Premium Warlock reward - that contains Witherhoard Exotic Grenade Launcher, a set of Seasonal armour and an XP boost.

Destiny 2: Season of Arrivals - How to get the Witherhoard Exotic Grenade Launcher Catalyst

If you speak to Banshee-44 after you receive it, you should be able to pick up a Catalyst quest for the new Exotic. To complete the Catalyst, you'll need to:

Once you've done that, visit Banshee-44 again to receive the Catalyst. You'll get the Silent Alarm Perk, where handling is increased and holstering this weapon automatically reloads it after a short wait.

You can check out the Season of Arrivals roadmap here, as well as everything we know about Destiny 2: Beyond Light. If you're just getting started with Season of Arrivals, check out our guide on how to unlock Contact Public Events, earn Umbral Engrams and complete the Means to an End questline.