In a previous post, Bungie talked about new Engrams that will drop as part of the Season of Arrivals activities. These Umbral Engrams drop from the Contact Public Events on Io and Titan and you can focus them to roll certain rewards.

Alongside new Season of Arrivals weapons, two weapons from each season of Shadowkeep will also be available in loot drops, as well as some of the Drifter's favourite items and armour rolls.

As usual, you'll be able to curate god rolls but this time, you won't be chasing weapon bounties. Instead, there's a new Umbral Engram to go after that contain the majority of this season's rewards, and you can spend seasonal currency to influence what you'll get, similar to the Menagerie.

This means that you can choose whatever weapon or piece of armour you want, then continually roll it to get better stats. All New Light and Season Pass owners will receive these Engrams while playing Season 11, but only Season Pass owners can access the full suite of Focusing categories. They are also part of the same loot pool as Legendary Engrams, though you're more likely to gain an Umbral Engram in this season. 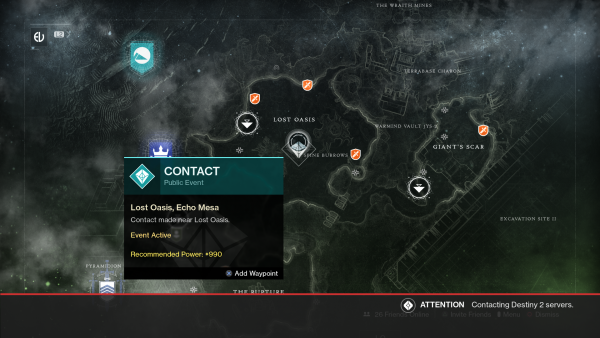 Destiny 2: Season of Arrivals - How to complete Contact Public Events

Each season of Shadowkeep has had its own seasonal activity and this one is no different. Now that the Almighty has been destroyed and a Pyramid has arrived on Io's moon, it's time to take part in a new public event. Strange new enemies have arrived that will lend themselves to the most enjoyable public events yet.

The Contact Public Event is basically Gambit-lite. You use a transmat to summon a Mote Bank, then kill the enemies in the area, collect Motes and deposit them into the bank. This is an ingenious way to make first contact with the ominous Darkness Pyramid lurking above Io and there's a challenging Heroic version of the event you can unlock.

Once you reach 100%, Blockers will appear that you'll need to clear out. Once all four waves are completed, The Will of Quria will spawn. Defeat them to complete the event and get your reward.

If you want to trigger the Heroic version, look for a message on-screen that reads “Concentrated Darkness coalesces nearby" and look for a beam of light. Run over to that area and take down the Champion enemies that spawn and collect the Bloom that spawns. You need to collect and bank each Bloom before the round ends to activate a Heroic version of this event.

In the end, you'll face the Taken Pyromaster, who's a much more challenging boss. He'll spawn minibosses regularly, too, so bring a powerful crowd control weapon, like the Witherhoard Exotic Grenade Launcher, or a powerful sniper so you can stand back a little.

You'll either get one or two Umbral Engrams, depending on whether it was a Heroic event or not, which you can turn Focus using the Recaster. 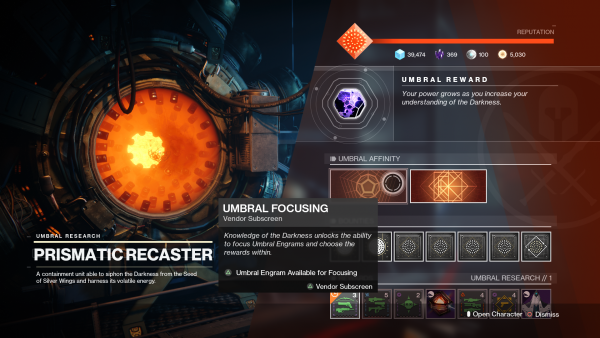 Destiny 2: Season of Arrivals - How to complete the Means to an End questline

After you've completed the opening mission and collected the Seed of Silver Wings Artifact, you'll need to head over to the Tower and have a word with the Drifter. He'll unlock the Artifact for you and then give you the In the Face of Darkness quest, where you'll need to complete a Contact Public Event run. You don't need to "finish" it, per se, because even if you fail the quest will update. You'll receive an Umbral Engram for your efforts, so return to the Tower and speak with him again.

The Cryptarch can't decode this Engram for you; you'll need to use the Umbral Decoder next to the Drifter instead, as this Engram comes from the Darkness. Once you've done that, speak to the Drifter again and he'll ask you to play a Crucible or Gambit match, or complete a strike to gather Darkness for the Prismatic Recaster. Again, do this and visit him again to get some Altered Element and Twisted Energy, your new materials for the season. 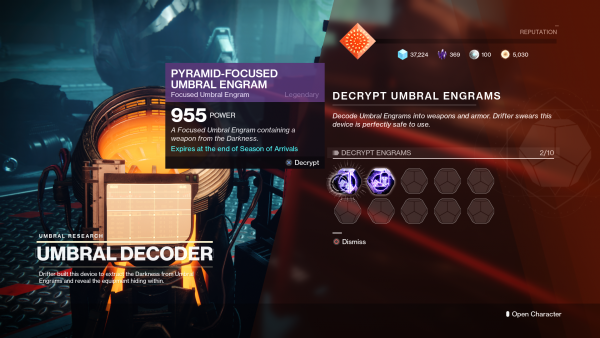 Interact with the Prismatic Recaster and exchange your materials to increase your reputation, then select Umbral Focusing. This lets you choose which reward you would like, whether that's a new Darkness weapon or another from Year 3. You can also choose Gifts of Light and Dark to increase the rank of the Recaster. Afterwards, take the Umbral Engrams to the Decoder to claim your rewards.

The quest will then update to Means to an End, where you need to fill the bar to 100% by completing Contact events. This is when things get a little buggy, but Bungie is working on solutions. 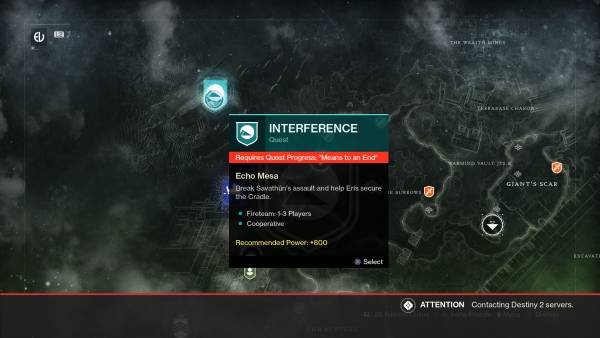 Once this step is complete, you'll need to collect Umbral Traces in Nightfall: The Ordeal, Nightmare Hunts, and Crucible Control matches, so just keep rolling until the bar is filled. Finally, complete the Interference mission on Io where you'll need to defeat Savathun's Witness then disperse three rituals.

Eventually, you'll see Eris again and she'll describe the rather convoluted messages from the Darkness she's receiving. As this is Eris we're talking about, not a lot makes sense at the moment, but you'll get some cool lore for your troubles.

You'll receive 200 Altered Element and be tasked with a final trip back to the Recaster to get some Pinnacle Gear and a nice XP boost. You can pick up bounties to earn new materials you can use at the Recaster, too.