A new Exotic hand cannon is now available in Destiny 2 and there's plenty of time to get your hands on it before the Solstice of Heroes event begins.

Thorn, the powerful Dredgen hand cannon, has been available in Destiny 2 for some time now, and it was promised that we'd be able to find its sister weapon, Lumina, during the Season of Opulence.

The mission to find Lumina begins in the same campsite as you found your broken Thorn, though Lumina has more of a healing effect as opposed to wild destruction.

For the later stages of this mission, it would be a good idea to form a Fireteam with folk who are the same stage of the quest as you. It'll make things a lot easier as you'll be able to contribute to each other's progress by getting kills and generating Orbs of Light.

To begin the Lumina Exotic hand cannon quest, you'll first need to head to the Salt Mines in the EDZ, which you can access through the doorway behind the church.

Power through until you reach the area where the Captain usually spawns and head to the back of the room to find a Transmat pad. Interact with it and you'll be taken to a familiar area above the Salt Mines.

Carry on until you reach the Fallen barrier, then go to the rails by the cliff edge on the left. You should be able to jump up to a platform above that will lead to the campsite, so hunt around for the chest that holds Thorn. 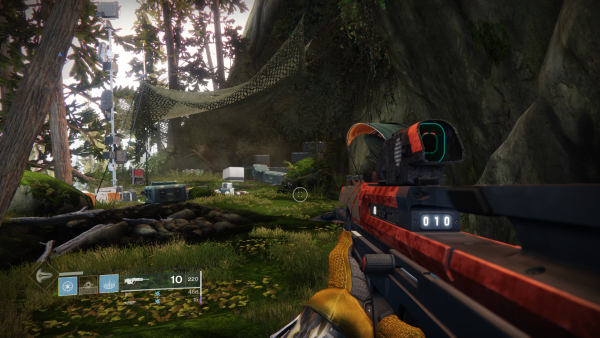 Afterwards, you'll receive A Fateful Gift, which is a letter from Shin Malphur, plus as System Positioning Device that will give you a rough location where to find a chest. This position changes once an hour, and can be found in several locations. For me, the chest was found in Excavation Site 2 on Io, though others have found it in The Mists on Nessus and the Spire of Kires in the Dreaming City.

Once you've found the chest, you'll get the Bearer of Evils Past Pursuit, where you'll need to generate 250 Orbs of Light to neutralise Thorn's Darkness with your Light. You can do this in any activity and any Orbs generated by a member of your Fireteam will count towards your progress.

Afterwards, you'll receive Rose and the Rose, Revealed quest step. There are three elements to this step, which involve:

An Exotic Auto Rifle or Machine Gun would work well here, and completing a Heroic Blind Well run will net you seven points, so play to your strengths. Finally, you'll need to complete an activity as part of a Fireteam with Rose equipped. Again, if you all have Rose equipped, you'll progress through this step much faster.

The next step is Strength in Numbers, where you'll need to kill 50 Guardians using a hand cannon. Your teammate's hand cannon kills will contribute to your own progress, so jump into a Crucible match or Gambit to get your kills. You'll also need to generate 50 Orbs of Light and Deny an Invader in a Gambit match, though you'll each need to eliminate an invading Guardian before they hit one of your teammates.

For the final step, you need to tackle the Will of the Thousands Strike on Mars. Make sure you have Rose equipped and destroy all 11 Hive Crystals. You need to do this with Rose in one run, so be prepared for a real challenge. Once you've destroyed all the crystals, kill Xol and Lumina is yours. 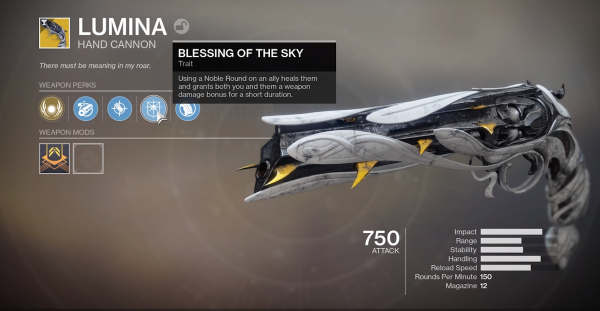 Its instrinsic perk is Nobel Rounds, where kills with Lumina leave behind Remnants. Absorbing these Remnants converts your next hip-fired shot into an ally-seeking Noble Round which partially refills their magazine. They'll also get the Blessing of the Sky buff which heals them and grants you both a weapon damage bonus for a short time.

The Destiny 2: Year 2 Moments of Triumph challenges begin July 9, as well as the new Tribute Hall event. A Solar Week is also coming soon as well as the Solstice of Heroes Summer event on July 30, so there's plenty to keep you busy on the run up to Shadowkeep.