Not long after you've collected the prize for your last job from Wakako, you’ll get a call about another; a messy one. This call starts the Sinnerman line of quests in Cyberpunk 2077.

Yet to see what Cyberpunk: Edgerunners is all about? Take a look at the SFW trailer for the anime series here.

Wakako wants you to collect a hit that's been put out on someone, and agrees to pay well. Johnny thinks the job stinks, but you go to meet the client regardless. He's apparently waiting for you with more details, so head to the map marker to meet with Bill Jablonsky, and this will kick the Sinnerman quest off.

As for the rest of the quest, here's what you should do to complete the Sinnerman mission in Cyberpunk 2077.

How to complete the Sinnerman quest in Cyberpunk 2077

First, make contact with Bill Jablonsky on the street corner of MLK and Brandon. He'll be waiting on the bench if you're early, and approaching his car after the time skip. 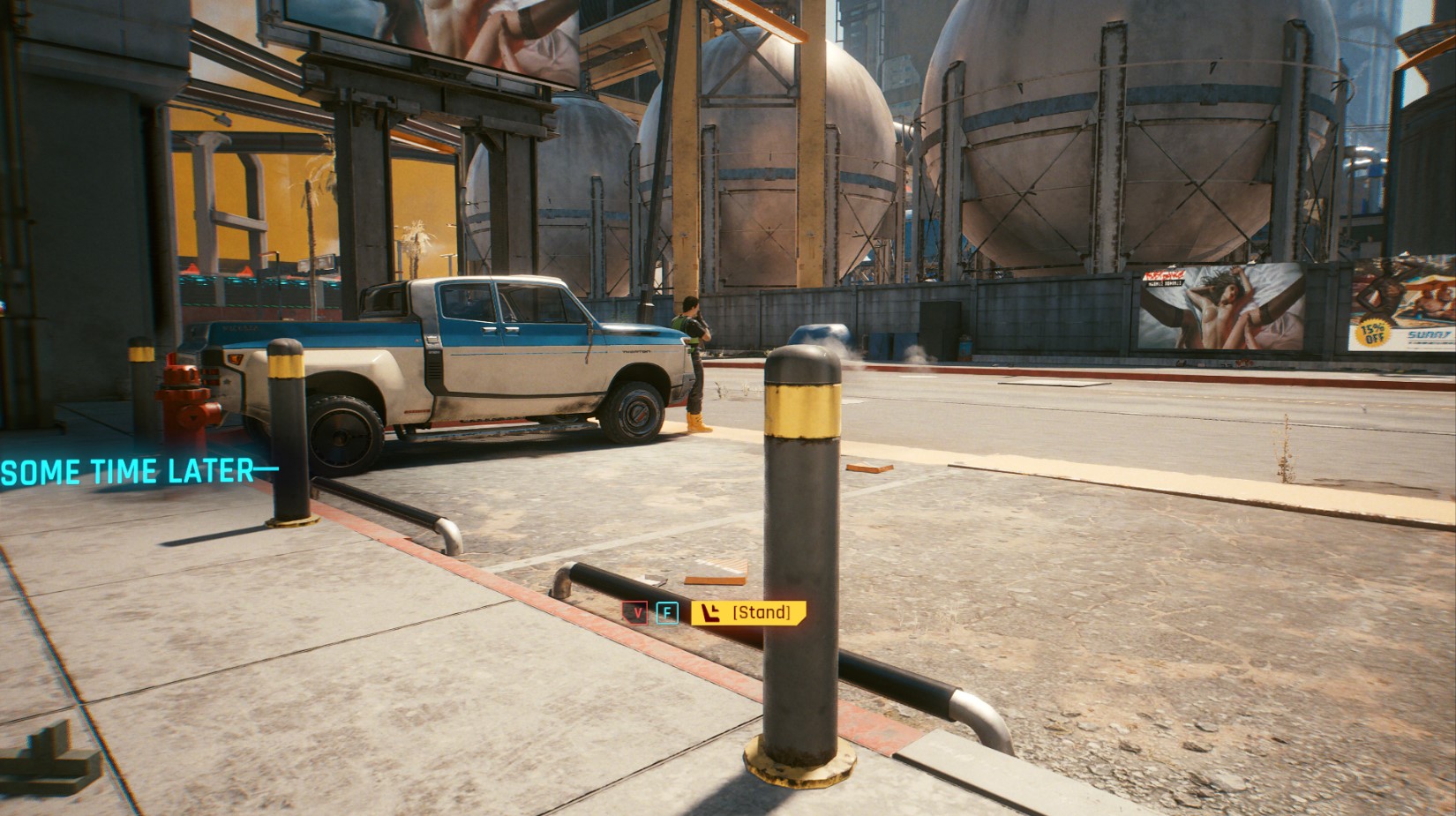 He tells you the target’s name for this mission: Joshua Stephenson, and that he’s a murderer.

Inside the truck, you can grill Bill for more information, and it'll soon be revealed that Joshua had murdered his wife. However, with 12 intelligence, you can comment how the plan sounds half baked. Bill then comments that he's spent his life savings on contracting you for help. 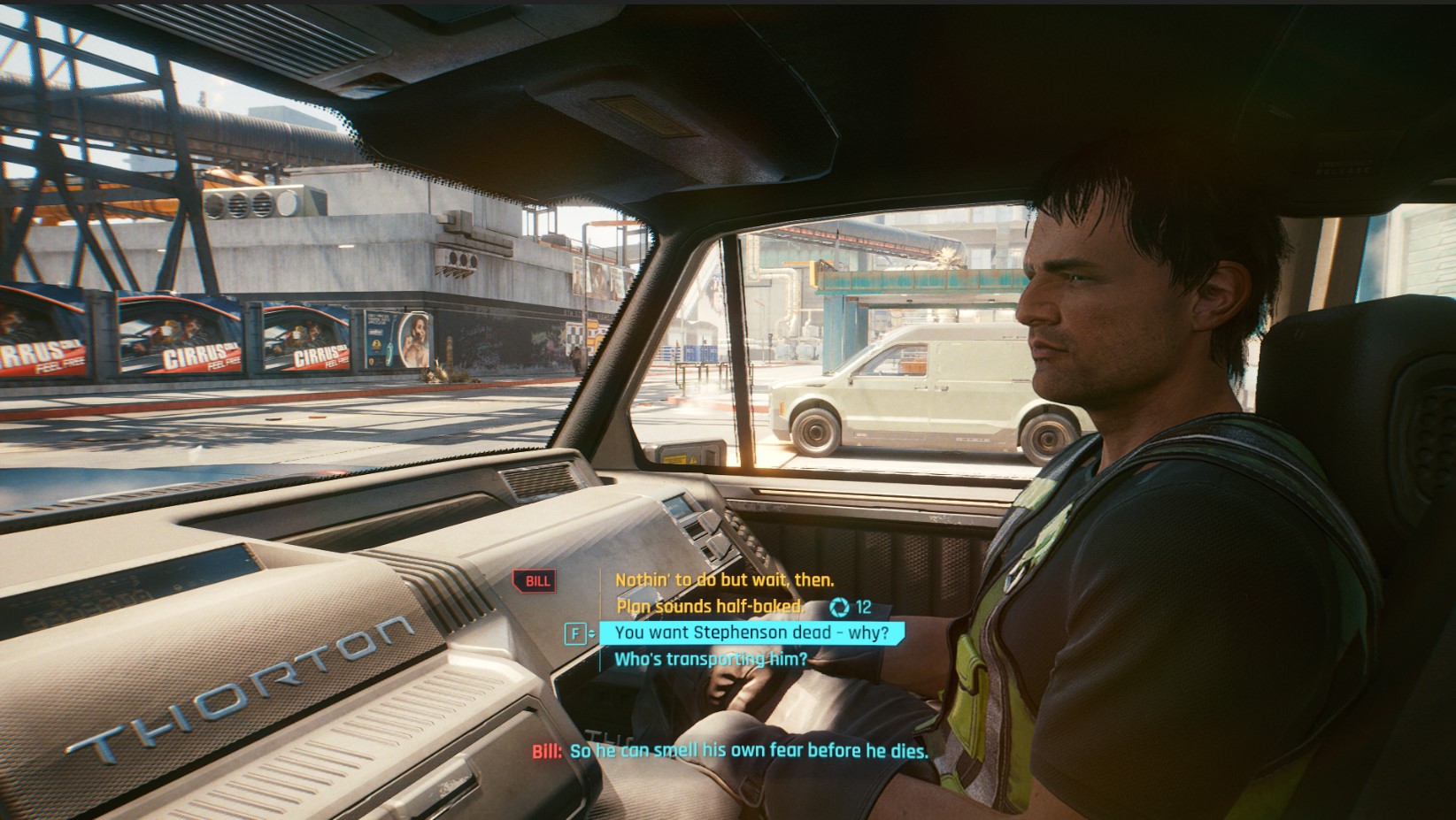 Then, without much warning at all, you’re thrown into a car chase with other vehicles throwing themselves in front of you at every opportunity. Stick on their tail and eventually they’ll stop., then Bill will demand that you stop the car so that he can confront Joshua... forgetting that there's police officers protecting him.

As you approach, you’ll see that it’s the NCPD transporting Joshua Stephenson, which is already not how the plan was to go down. 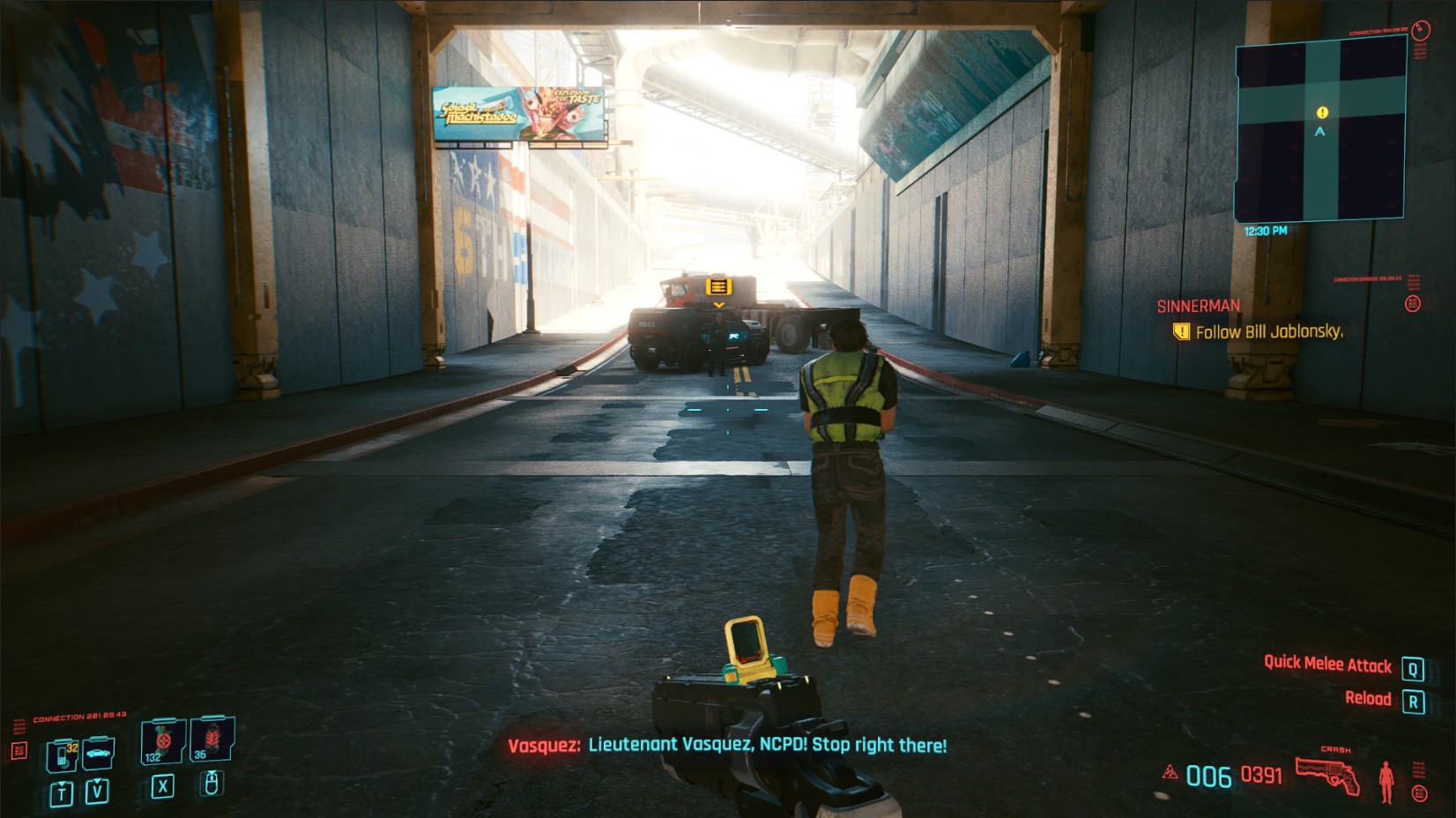 You’ve actually got a few choices here, but as suggested by the fact you've not been able to save throughout this whole section, it's a little more on rails than you might think:

As mentioned, if you just kill everyone, you'll get 5k there and then, and there’s nothing more to the quest.

However, we'll assume that you let the officer kill Bill. After this, speak to Joshua, and he'll invite you to go with him and some others. Exhaust the dialogue options here, and then ultimately choose to go with Joshua. If you don't go along, the quest simply ends here. 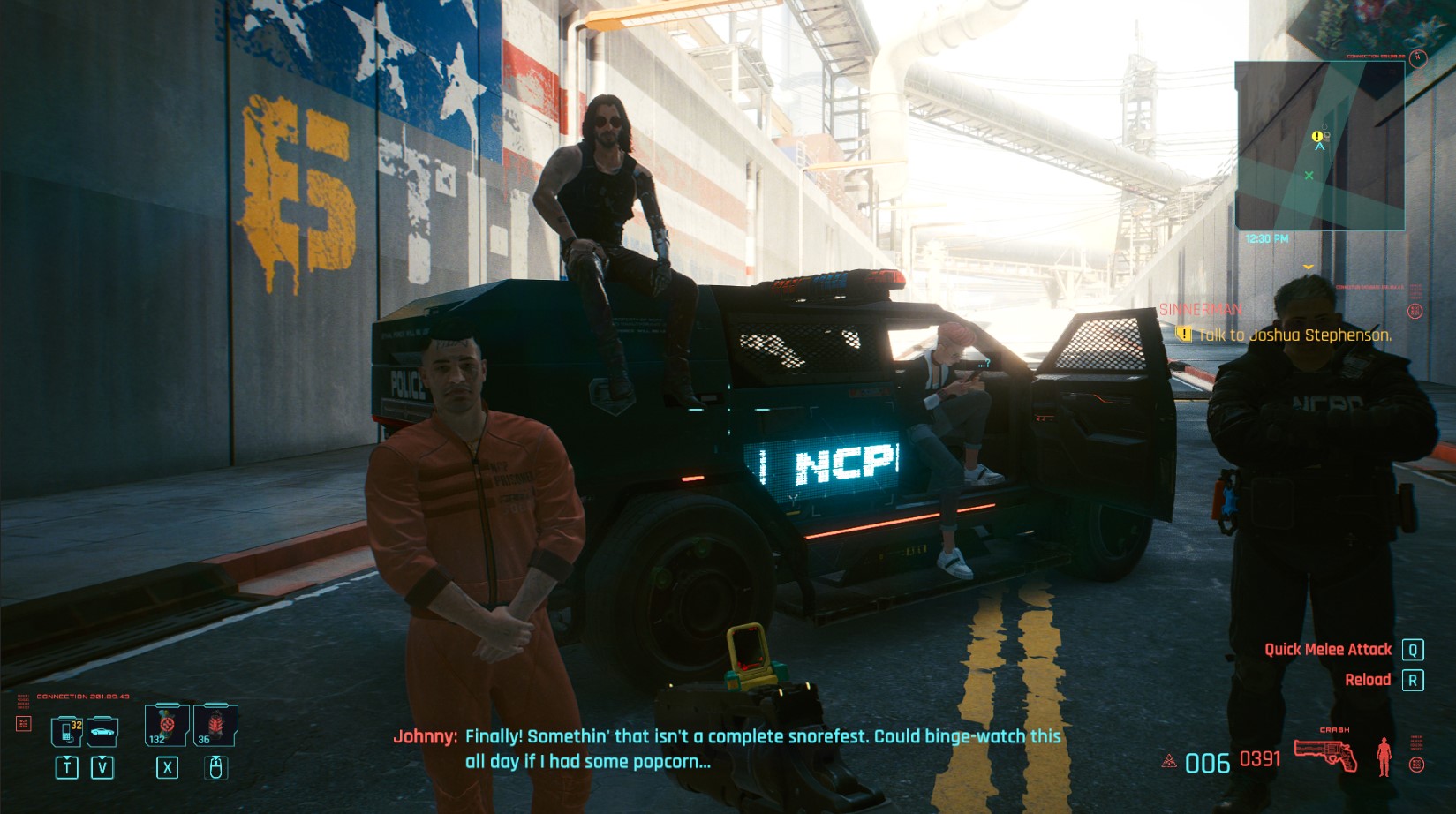 His companions, Rachel and Vasquez, aren’t particularly happy with taking you, but hop in the back of the car and you’ll start to get the lowdown from Joshua regarding his jail time and how he got into Christianity. He’ll offer to pay you to stay with him for the day, and agree with him if you want to continue with the quest line. 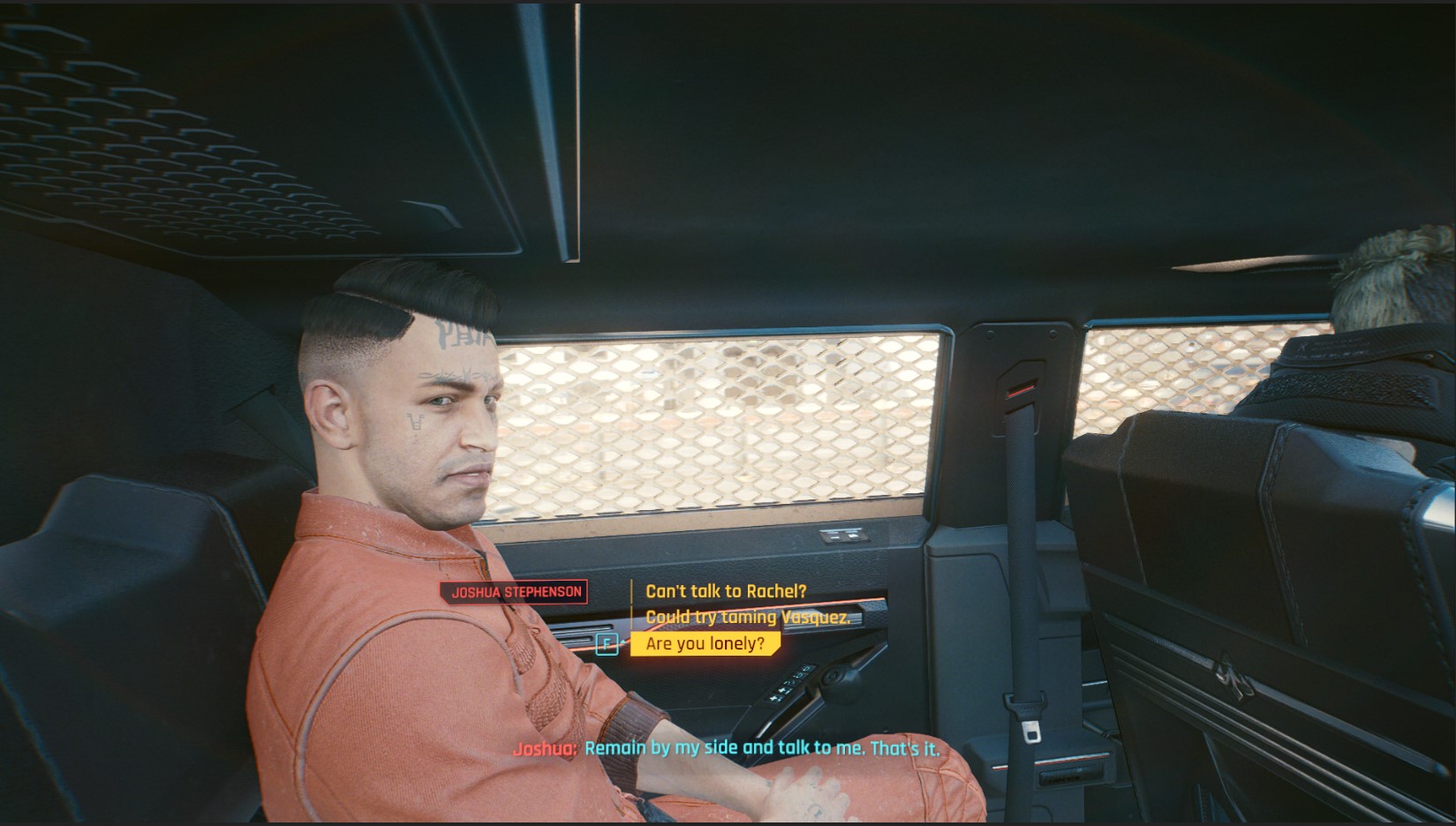 At the end of the ride, the Sinnerman quest finishes, and a new quest, There is a Light that Never Goes Out, starts.

Appreciating that the title of this quest is a reference to The Smiths, follow Joshua into the mysterious house that belongs to Gloria El-Ahmar.

At the door, speak with Zuleikha, and again, try to ask what’s going on. Still, no one will really tell you, but you will learn that Joshua murdered Zuleikha's brother. Zuleikha has chosen to forgive Joshua, teaching him about Christianity and thus, leading to his conversion. 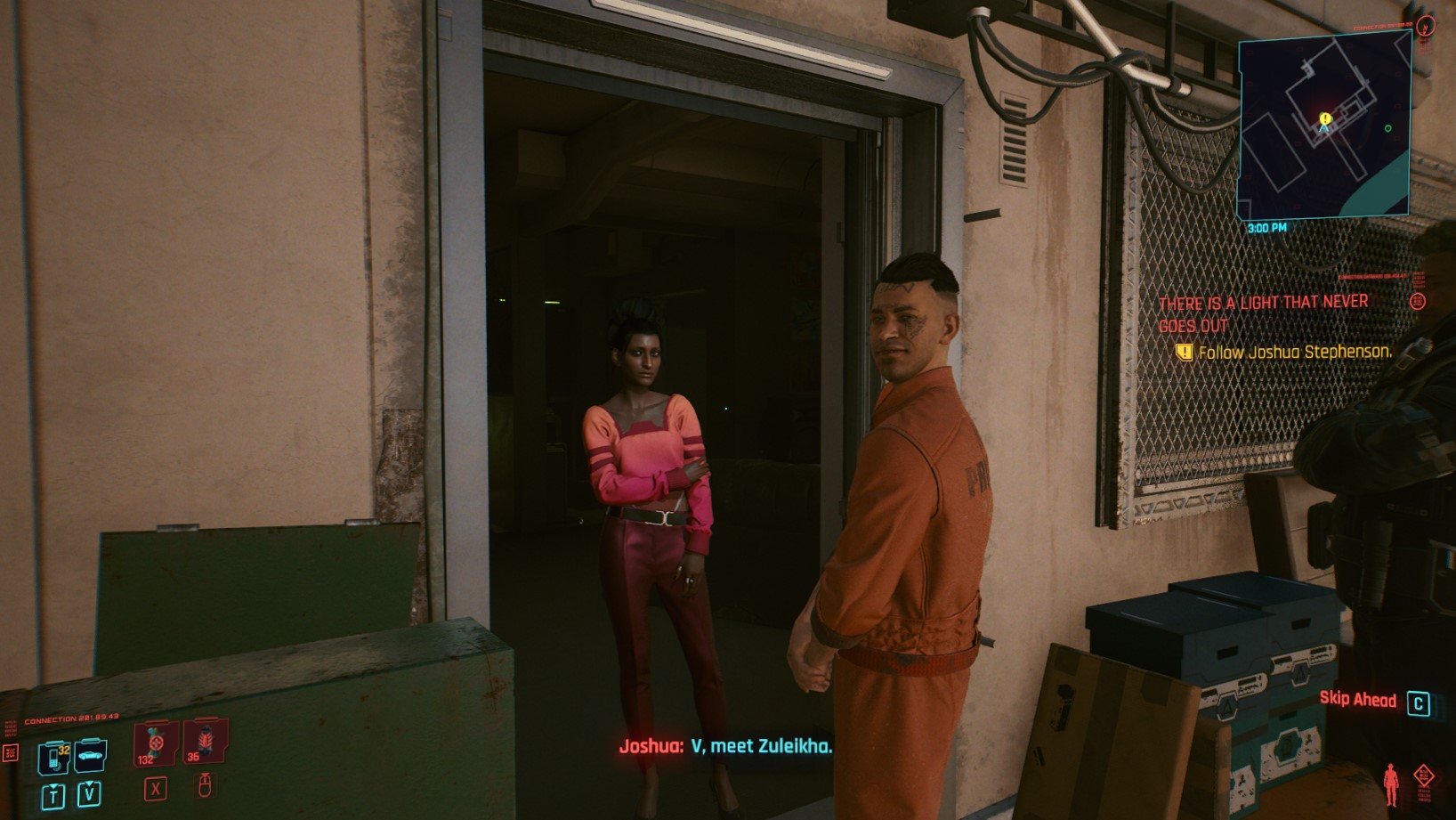 In the ensuing conversations, reply as you wish about God, and it’ll emerge that Joshua wants to turn his own crucifixion into a braindance in the hopes of sharing his sacrifice with others, and showing them God's love.

He hopes that his Christ-like sacrifice will inspire others to "redemption", and that he's been sprung from prison by the braindance studio Rachel works for so that they have exclusive rights. 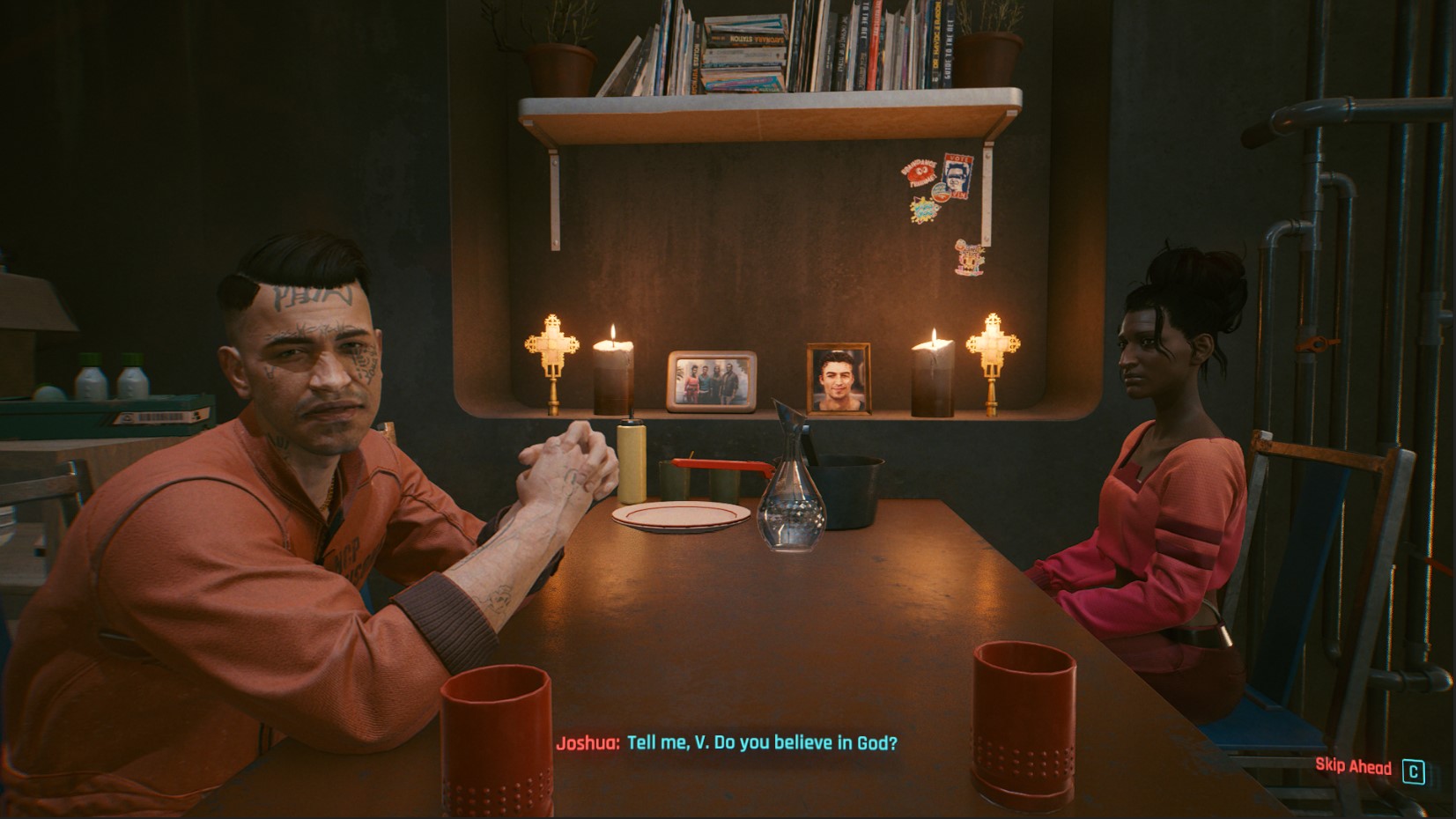 After the exchange, you'll meet Zuleikha's mother, Gloria, who hasn't forgiven Joshua for his crimes. She'll request that you leave, and if you do, the quest ends here. If you decide to stay, make your way to the car outside.

After the ride, in the parking lot of the diner, you can talk to Rachel about Joshua. Give your honest opinion, but she's cynical as ever.

If you've been trying to dissuade Joshua from the plan, Rachel will offer to double your fee if you walk away and let her get on with it. Johnny doesn’t like giving in to corpos, and neither do you, so refuse the bribe if you want to keep the quest going. 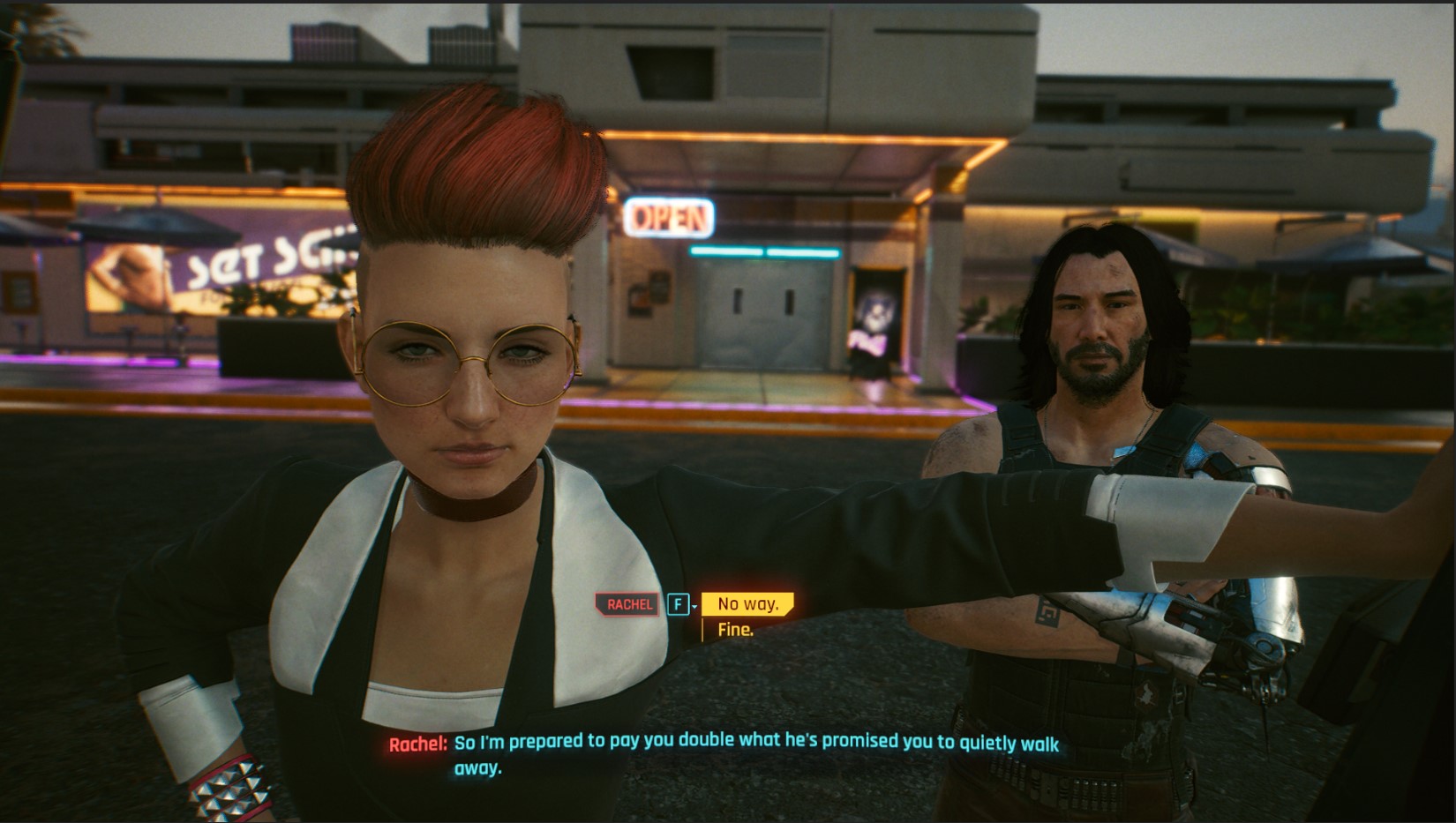 Inside, with 12 reflex, you can dig what dirt the studio has on Vasquez. In the following series of conversations, you can continue on whichever line you've started towards: trying to dissuade or embolden Joshua. Eventually, Rachel has had enough, will leave, and then Joshua will say goodbye to you. Before finishing proceedings, talk to Johnny.

He sees the whole situation as a textbook case of corporate exploitation, but then he would, wouldn't he?

This brings There is a Light that Never Goes Out to an end. You'll have to wait or complete other jobs to come to the next part: They Won't Go When I Go.