Forza Horizon 4 is gearing up for an announcement at The Game Awards, and it looks like it's related to Cyberpunk 2077.

With this year's Game Awards coinciding with the launch of Cyberpunk 2077, there's bound to be at least one or two nods to the open-world sci-fi RPG. One thing that looks certain is that Forza Horizon 4 will be announcing a special collaboration, which appears to have already leaked.

Following a recent update to Playground Games' open world racer -  which adds new stunt racing mode Super7 - some fans have discovered that when filtering the settings for car models, the 'Quadra V-Tech' has been added.

For those that don't know, that's V's car in Cyberpunk 2077 used throughout the game's marketing, including the E3 2018 gameplay reveal.

According to Destructoid, it's apparently already possible to use the Quadra in the open-world racer, albeit only in the new Super7 mode. One Reddit user has already confirmed it with screenshots of the futuristic vehicle tearing down the British motorway. 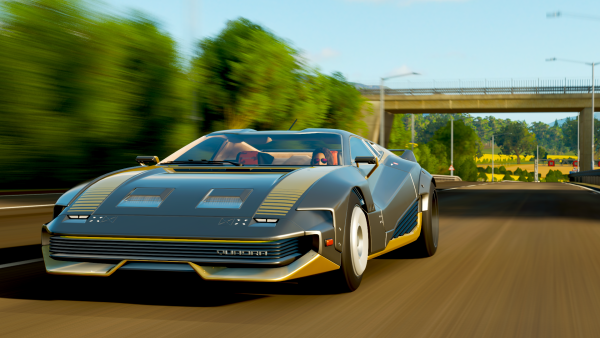 The Forza Horizon Twitter has more or less confirmed this with a GIF before swiftly telling its followers to tune into The Game Awards, where we'll surely get the official reveal.

Who knows, there may be more surprises in this crossover that haven't yet leaked. After all, Reddit user NuclearRocketFarmer had previously made Johnny Silverhand's Porsche Turbo in the game.

The Forza Horizon series has already had its share of popular crossovers, from a Halo showcase event featuring the Warthog to the Regalia from Final Fantasy XV, as well as the excellent Lego Speed Champions DLC.

The Game Awards, which will be streaming across three studios in Los Angeles, London and Tokyo, is expected to have even more surprise announcements, besides giving out a lot of awards to the best games of 2020 - Cyberpunk is of course not eligible this year. Microsoft is expected to make a number of announcements, although Xbox's Aaron Greenberg has told fans to dial down expectations.

Meanwhile, Cyberpunk 2077 has officially launched, and is already Steam's top game with over one million concurrent players.