Here’s a sentence I didn’t think I would be writing this year, a year when truly nothing seems impossible – Bugsnax, a game ostensibly about brightly coloured walrus people eating sentient snack food, actually holds a dark secret akin to Spec Ops: The Line. I’ll get back to that in a bit.

In Bugsnax, you play as a grumpus journalist who’s been invited to the isle of Bugsnax by Elisabert Megafig, an intrepid adventurer with a strong Australian accent. You know, the Crocodile Dundee type. Grumpuses are basically a cross between a walrus and a Fall Guy - huge eyes, fangs, generally cuddly appearance. 11 of them decided to join Elisabert on her hunt for a fresh start and only the tastiest snacks, but when you arrive on the island yourself, the inhabitants of the newly-founded town of Snaxburg have fallen out with each other, and Elisabert, who was responsible for getting food on the table, is nowhere to be found.

From then on, you’re after the real scoop – finding out what happened to Elisabert and bringing her back. In order to do that however, you need to find the other grumpuses and bring them back to town so you can interview them and gather clues. Each of them settled down on a different part of the island, and in order to convince them to return, you have to catch them some snax.

While Bugsnax offers a few diverting mini games, the gameplay focuses mainly on snack catching. Over time, you gather an arsenal of inventive tools and traps, from the snack trap that you can snap closed as soon as a snack gets close enough, to a trip wire that you can clamp to surfaces and then watch your prey run into Horizon: Zero dawn-style. Another important utensil is the sauce slingshot, which allows you to lure bugsnax in using their favourite sauce. Your journalistic prowess also helps you in catching the walking delicacies – with your camera, you can scan each of the 100 varieties, which allows you to gain information on their behaviour. I had great fun figuring out how to net each nibble, with some of them genuinely stumping me, even though sometimes, if rarely, the AI would get confused and make catching difficult.

I was particularly fond of snacks that could only be caught using other snacks, as that can lead to some fun and unforeseen environmental gameplay where the bugsnax basically do your work for you. The different bug bites are a delightful mix of simple and ingenious design. Sometimes the design consists of a pair of googly eyes stuck onto food, like with strawberry Bugsnack Strabby, but you also meet Bugsnax like the Instabug, an Instagram-ready cupcake slash ant complete with glitter, or Picantis, a multi-course Mexican meal that is also a mantis. 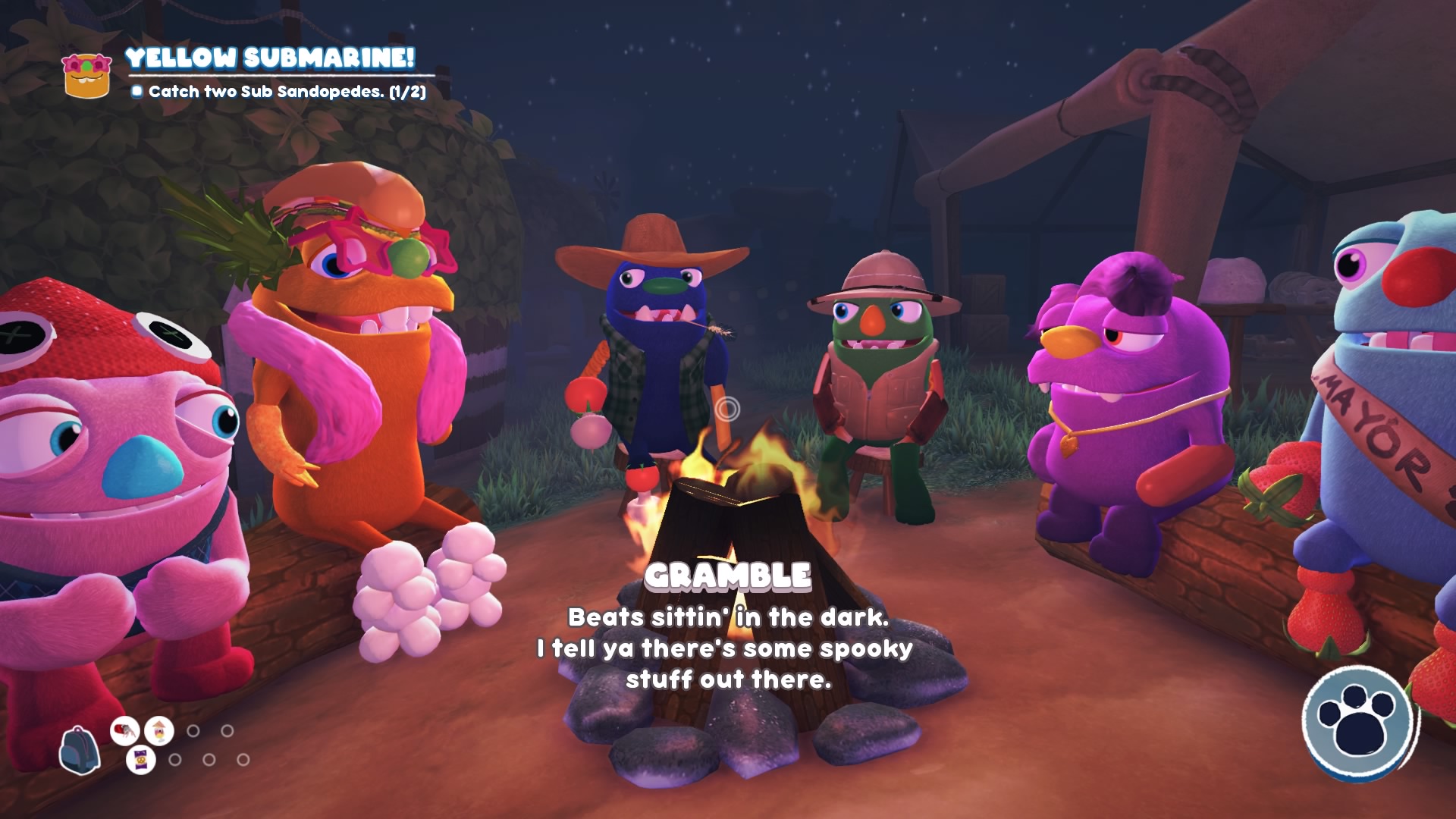 Just like Pokémon, these creatures have a habit of saying their name over and over, which genuinely made me laugh, especially considering a whole host of high-profile voice actors came into work to do nothing but make a few Pokémon noises. Once caught, you bring bug bounty back to Snaxburg to feed them to someone, turning their limbs into food until you’ve created an impressive, nightmare-inducing abomination.

It’s important to remember that Bugsnax is also a narrative game, because developer Young Horses put a notable amount of work into the narrative, even though an actual plot doesn’t emerge until the last hours of playtime. There’s the story of a community there, one that had a lot more impact on me than my search for a missing adventurer. The grumpuses you meet are pretty well-rounded characters, each with their own relationship to the bugsnax phenomenon and more importantly, the other inhabitants of the island.

There’s genuinely no grumpus I don’t like, their names akin to someone sticking a few words into a jar and giving it a good shake, their personalities overdrawn to the point of caricature, but lovingly so. Gramble Gigglefunny for example, is a highly anxious individual with a genuine love for bugsnax and a twangy accent reminiscent of the American south. Cromdo Face is full on Brooklyn car salesman in both voice and demeanour. 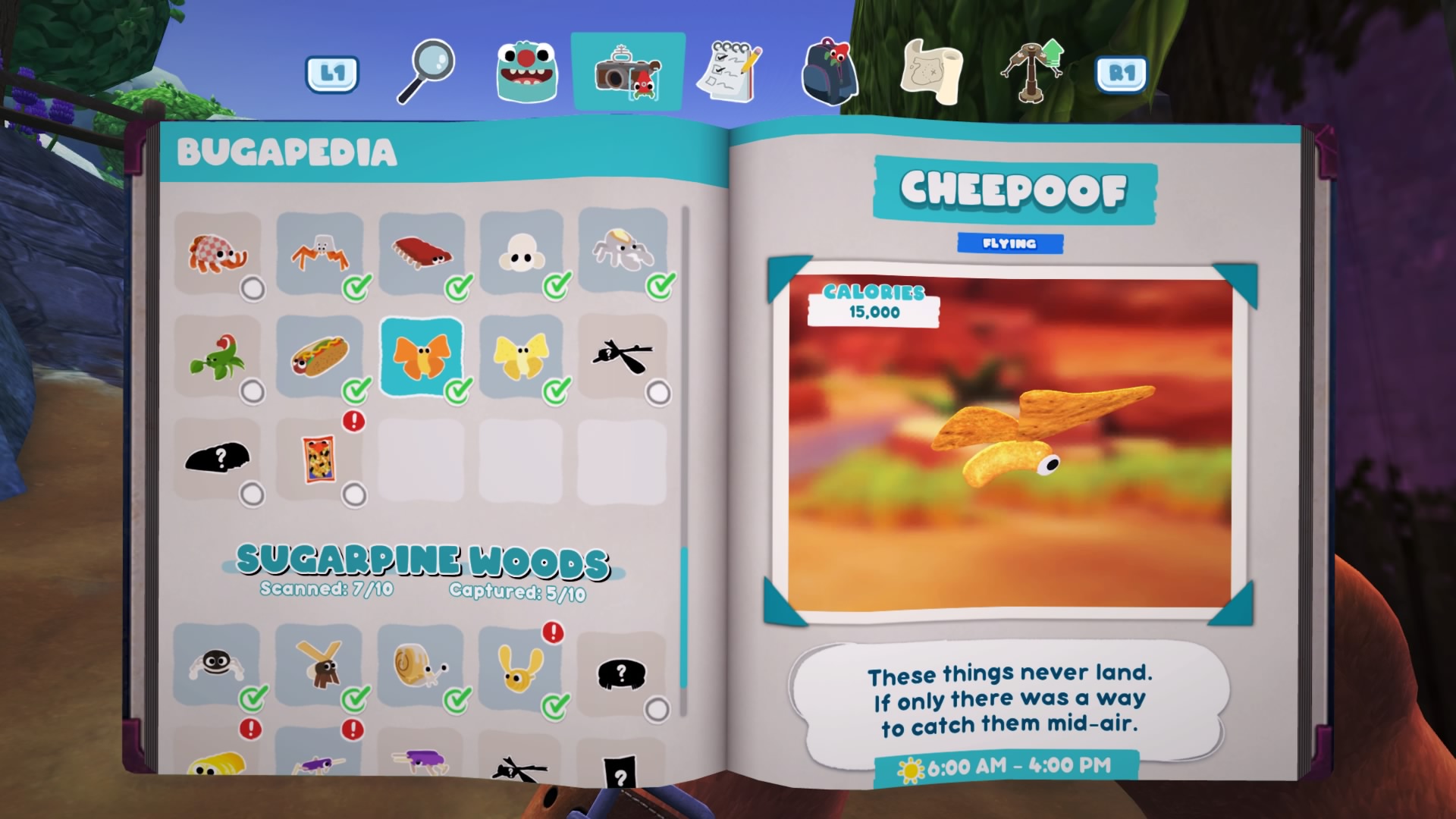 The voice acting is stellar, with actors delivering peak performances, making them a joy to listen to. I also would never have expected this game to be an absolute a go-to for a portrayal of healthy same-sex relationships and respect for the nonbinary. Grumpuses are clearly far ahead of us.

You can help each of your new friends and get to know them better by completing a number of sidequests, which I highly recommend because for some reason that’s where the game hides not only much of the character development for each villager, but also bona fide boss battles, which hold some of the most interesting, if still overall pretty simple, gameplay of the entire game.

Here, too, a few tasks turn out to be frustratingly fumbly, but I found that to be negligible for the most part. Towards the end of the main campaign, I got stuck quite badly at some point, because there are aspects to the gameplay Bugsnax just doesn’t mention, which is odd for a generally very approachable game. On the technical side there isn’t that much to say, I wouldn’t call Bugsnax a good-looking game, but that’s not what the focus is on here – it’s inventive, and that’s what matters. You’ll get next-gen peak performance elsewhere. I do however think that the PS5 version will improve dramatically on the lengthy loading times I experienced on the PS4. 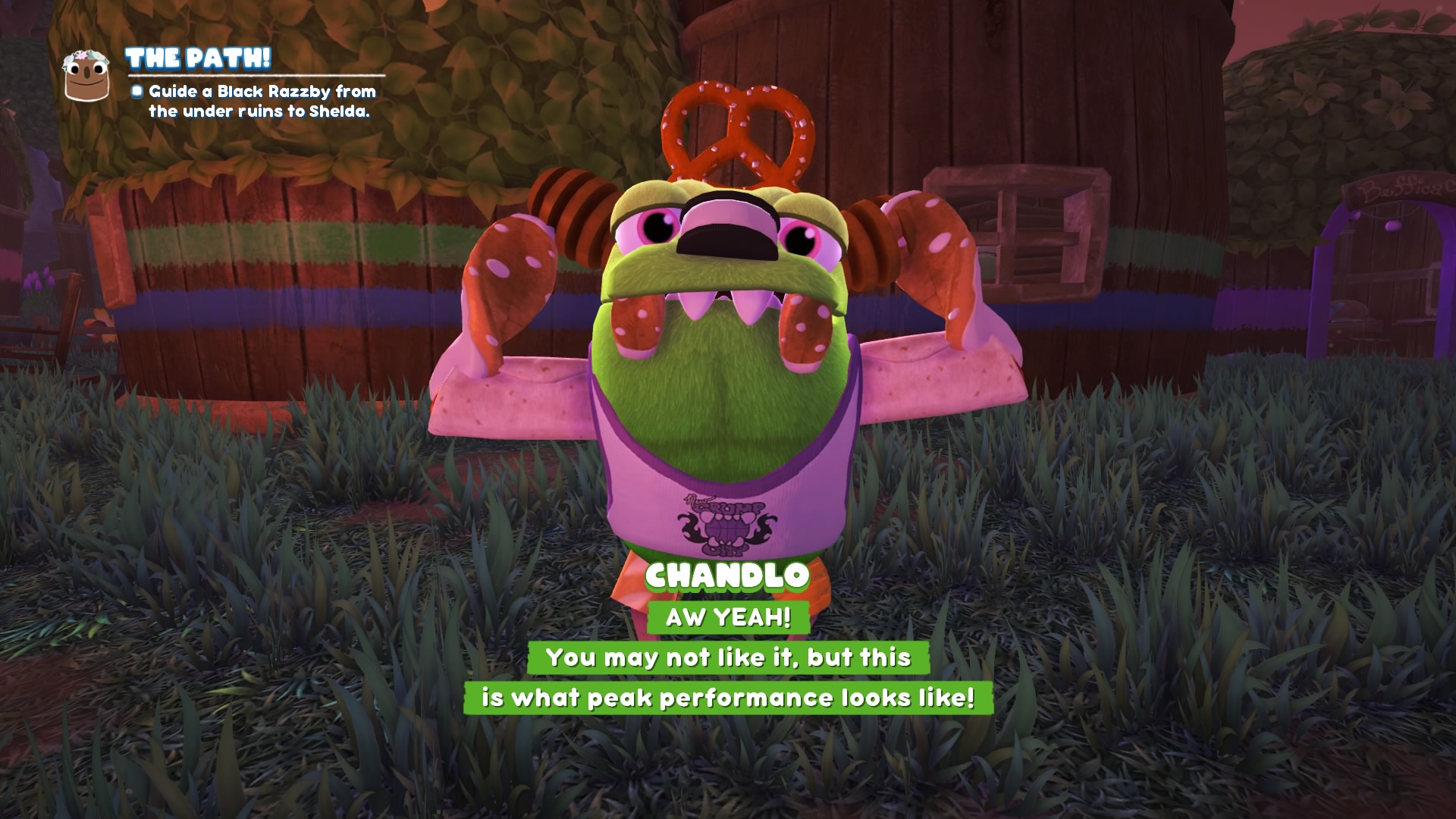 But here’s the kicker, really the only thing I didn’t like, but which ended up as such a sore point for me it nearly ruined the entire experience. I’m talkin’ bout Bugsnax and the Spec Ops: The Line phenomenon.

When Bugsnax was first announced at Playstation’s State of Play event, the reaction was one of universal enchantment. People immediately started bopping to the theme song by British band Kero Kero Bonito, and the concept of snacks that behave like animals and for some reason turn limbs into food was weird, but in a good way. You’ll encounter the word “whimsical” in response to Bugsnax a lot. Clearly that’s the type of vibe Young Horses wanted to put out there with its marketing, and social media responded in all the right ways, from calling it the next big wholesome game of the year, to parents enthusiastically showing off their kid’s reactions. Without spoiling the whole experience for you, the wholesomeness does not last. Like in Spec Ops: the Line, or maybe even The Last Of Us 2, here you end up punished for what you’ve been told to do all along, in an unexpectedly harsh way.

Bugsnax is smart about it, and under any other circumstances I would probably applaud the bravery of such a drastic turnaround, but looking at the marketing in particular, I can’t help but feel duped. Such a drastic change makes it difficult to figure out who the game is for, and what it wants to be remembered for.

More importantly, while not explicitly marketed towards children, I worry how those who do end up playing it are going to come away from this. Bugsnax has PEGI and ESBR ratings of 7 for mild violence, which I simply don’t agree with for its ending alone, and isn’t that a strange thing to have to say. Bugsnax is a pleasant little gem of a game, but I don’t think I’ve ever encountered another title that came so close to ruining it all for me so close to the finish line.

Bugsnax will be available for PS4, PS5 and PC on November 12. Version tested: Playstation 4. A copy of the game was provided by the publisher.