BioShock Infinite is one of the most controversial and politically-charged games VG247's Dave Cook has ever played. It's simply one of the best games of the generation.

Developed by Irrational Games, BioShock Infinite is the true follow-up to the studio's 2007 original.

Releasing March 26 on PC, PS3 and Xbox 360, BioShock Infinite also comes with a DLC season pass option. Check out what you get for your money here.

The publisher also released a gameplay trailer that shows the district of Emporia torn apart by civil war. Watch it here for a good idea of how BioShock Infinite plays.

Humanity is capable of some truly despicable acts. One glance through the history books will reveal atrocities and inequality so inhumane you'll start to question the true extent of man's morality.

Pages dedicated to slavery, racial segregation and the rich-poor divide can't be ignored and cannot be erased. These things actually happened, and they serve as the backbone to BioShock Infinite's warped tale of arrogance, religious doctrine and turn-of-the-century change.

It's one of the bravest games I've ever played. As you walk the sunny streets of Columbia's floating paradise you'll see posters depicting Chinese and African-Americans as demons. You'll see people of colour working in chain-gangs. The 'N word' is used often.

At one point you'll walk down a dank hallway. To the left is a dilapidated toilet marked "Irish and Coloureds only". Take 40 paces along the corridor, and through the double doors you'll be met with plush red carpets, leading to a pristine bathroom for white residents. Inside you'll find an apologetic black man waiting to dry your hands.

Its shocking, but Irrational Games hasn't done this just to outrage the games press or score spun headlines. The brazen bigotry exists to make a point. Much like the original BioShock's Rapture, the imagery shows the folly of ignorance, and that every utopia is flawed at its core. 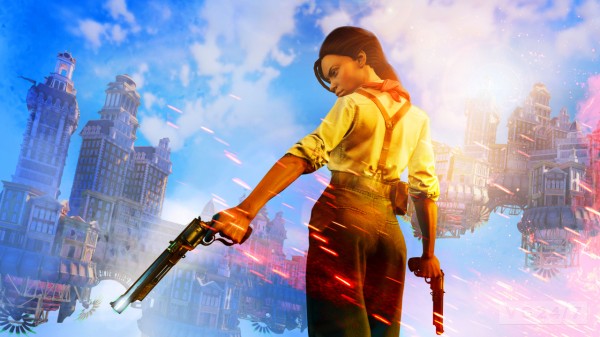 Ruled by Zachary 'The Prophet' Comstock, Columbia is a false heaven that weans its children on militaristic toys and propaganda, moulding them into soldiers who will live and die to serve its twisted ideals. Behind its carnival veneer lies a brutal underworld brimming with hypocrisy and death.

Then protagonist Booker DeWitt arrives in town, turning Comstock's immaculate utopia of the sky on its axis, and leaving immeasurable death in his wake. He's a deeply flawed man, someone you'll spend all of the 12-hour campaign trying to understand.

After racking up some sizeable gambling debts DeWitt is forced to search Columbia for Elizabeth, a prodigal child who is said to lead the city to a new age of prosperity. Your first experience on the streets will probably see you wandering around in an amazed stupor. It's a beautiful game.

No screen space is wasted as market vendors peddle their wares, airships drift lazily overhead, all set to a filter of red, white and blue confetti. It's technically superb, even if some Xbox 360 textures look quite muddy up close, and like Rapture before it, Columbia feels so tangible that it's a character in its own right.

There's a real sense of dread that sustains for the duration. It burrows under your skin and refuses to eject, backed up by mystery at every turn. You already know this game has plot twists, but Irrational hangs evidence and misdirection in front of you that constantly keeps you guessing. It's engaging, frequently powerful stuff.

On the mechanical side, BioShock Infinite handles well. There are stark similarities to the original game such as raiding containers for cash and food. Automated vending machines that dispense ammo and medi-kits, as well as upgrades for both your weapons and Vigor powers. 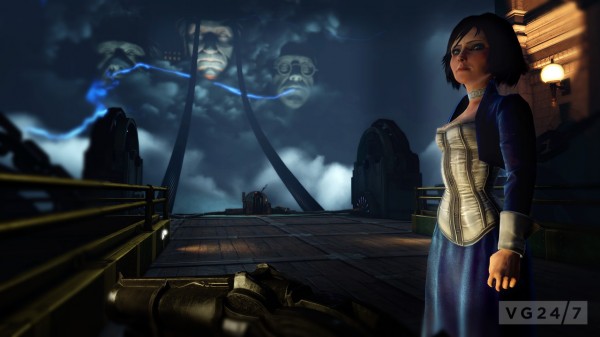 These supernatural tonics give Booker a range of powers such as Shock Jockey, which can be used to electrocute enemies or bodies of water. You can also use it to charge up switches and as with all Vigors, has an alt. fire mode that typically lets you lay down proximity traps.

There are eight Vigors in total and while they back up the gunplay well, they don't feel as prominent as BioShock's Plasmids. You can fight your way through most encounters without them, as they don't do much damage to begin with.

Until you start buying upgrades they're more useful for crowd management and as a finisher instead of an out-right means of attack. But even once you've paid to improve each Vigor, they still aren't as destructive as you might like.

That said, you can also combine Vigor effects for added depth. Blasting a pack of guards with Bucking Bronco will cause them to hang in the air paralysed so you can then torch them with Devil's Kiss, or blast them off the city's edge with Undertow. There's an element of strategy at play, even if it feels wafer-thin.

Then you have Elizabeth, the heart of BioShock Infinite's plot. She's a superb companion, and one you never have to coddle or worry about. Her AI is visibly smart as she seeks cover and tosses you useful items during a gun fight. You can also use her reality-warping powers to give DeWitt an edge in combat.

An example of this sees the pair trying to commandeer the late Lady Comstock's airship. You'll fight through a large sandbox area full of Skyhook rails and terrain that gives you freedom to proceed as you see fit. Elizabeth's ability to open rips in reality called 'Tears' can change your approach further. 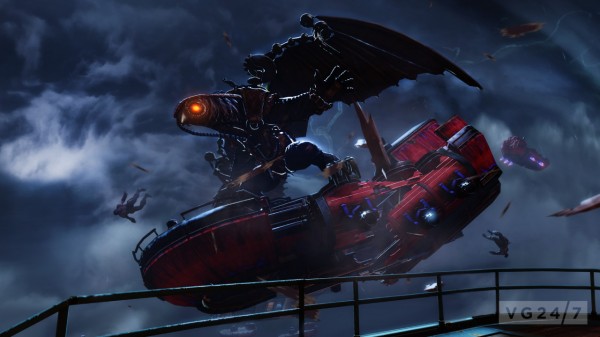 You can phase in ammo crates, health caches, ad hoc cover, auto-turrets and more. Summoning in Motorised Patriots - lumbering statues of George Washington and other founding fathers armed with hulking mini-guns - is a personal favourite. You'll also have to fight your fair share of these monstrosities of course.

One monstrosity who is severely under-used is Songbird. You're led to believe that Elizabeth's mechanical guardian will block Booker's rescue mission at every turn yet it rarely appears throughout the campaign. Resident Evil 3's Nemesis it is not.

Other antagonists will hound you in Songbird's place, such as leader of the Vox Populi rebel movement such as Daisy Fitzroy. She fights for the people, but wants to paint the streets red with the blood of the white upper class. She and Comstock are essentially a palette swap, both idealistic dictators on either side of the race divide vying for Columbia's throne.

None of these players come close to matching the fractured psyche of BioShock's Sander Cohen, or Andrew Ryan's misplaced self-righteousness. In fact, BioShock Infinite's final third trades words, characters and ideals for bullets and bombs. Its cast makes way for gunfights that seem to outstay their welcome.

The game falls into a similar trap as Dead Space 3, steadily shifting focus from pathos and immersion to walled off arenas full of enemies. Kill everyone in the area and you may proceed. It feels like filler compared to the incredible sights and symbolism that come before it. 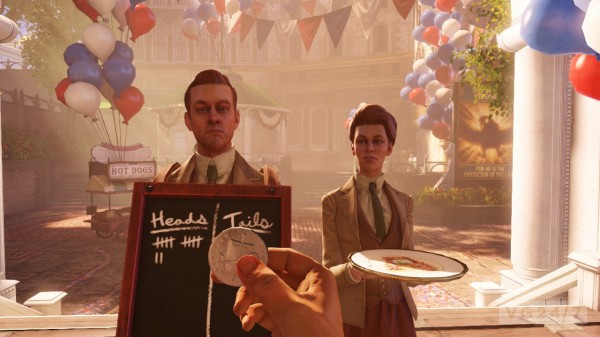 There's not enough time to drink in the geography during the closing hours. You'll be too busy zipping along Skyhook rails volleying off RPG rounds at Handyman sentries, as flame troops hurl balls of flaming death at you. You'll want the game to shift focus back to story-telling.

As the plot begins to wind down it returns to the same "delicious" question being asked throughout. Whatever answer you come up with is probably wrong, and when you come to understand the context of "Infinite" itself you'll see everything in new light.

After the end credits roll you'll have a million questions on your mind, but that's not because the plot fails to tie everything together. Instead, this is a game that wants you to be sceptical, to distrust everything you see so that it can rail-road you with twists until the end. It wants you to think.

Although Rapture and its host of psychopaths, monsters and liars makes for a more engrossing experience, BioShock Infinite is a superb piece of story-telling that deserves to be played by all. It surpasses Levine's original concept on many occasions, but just falls short of ascension.

It succeeds in shrouding everything in a deeper mystery than its predecessor. There are half-truths everywhere. But no matter which way the narrative shifts, or what you choose to do while playing BioShock Infinite, you'll want to go back right back to where it all started and experience it again with clearer eyes.

You'll want to go back to the lighthouse.

Disclosure: To assist with writing this article, 2K Games sent Dave an Xbox 360 copy of BioShock Infinite. No other merchandise or advertising was offered or accepted.