The problem with RNG is it will shove a stick in your bicycle spokes. The random number has no remorse. The best laid plans of mice and men soon go to shit when you fail a roll and that victory that felt assured actually results in the massacre of your entire party. It's a harsh lesson, a bootstamp on the adventurer's ego.

Thank the gods of Murder, Death and Tyranny for the quicksave, then.

"Saves are broken in this build so I have to do this without saving," says Swen Vincke, CEO of Larian Studios. Whoops.

The city of Baldur's Gate is a tentative haven on the Sword Coast, a region torn apart by raging war. The cult of The Absolute, led by the mind flayers, is rising, kidnapping you and implanting a tadpole into your mind - a parasite that will turn you into a mind flayer within days.

After barely escaping the cult, the player must form a shaky coalition with others suffering the same fate. This parasite in your mind allows telepathic communication, and these powers will grow as you make your way to Baldur's Gate and beyond to confront the Dead Three: the Gods of Murder, Tyranny and Death.

I recently sat through a playthrough of Baldur's Gate 3 by Larian Studios in Paris. We watched Swen play through his own game for - according to my voice recording, 2 hours and 41 minutes - and it's testament to what unfolded that, even sitting in a cold basement on hard wooden benches and with no natural light, we're still enjoying the performance (because that's what it is) by the time the screen turns blank.

Baldur's Gate 3 is Dungeons & Dragons through and through. Its lore, its looks, its rulesets, its atmosphere. But more importantly, its sense of improvisation. You can have all the rules, stats and tables of a Dungeon Master's Guide, but when those D20s fail your high percentage hit chance, you better think fast or suffer the harsh consequences.

"It's a fresh build. We wanted to let you play it, but it just wasn't ready," says Swen. It's an honesty that's refreshing in video game development. And so we watch as Swen escapes a crashed Nautiloid (a sort-of organic ship that can travel through dimensions) and flees the dreaded mind flayers. His character, and those he will soon try to recruit to his party, have all been infected and must travel to Baldur's Gate and beyond in this 100 hour quest.

Swen's origin character of choice is a vampire spawn high-elf rogue - I told you it was pure D&D - and he quickly learns that the parasite in his head might kill him, but it also gifts him telepathy, so he can read other character's memories and see through their eyes. This ability is central to Baldur's Gate's campaign and characters, although the extent of these abilities are only hinted at in the early gameplay we see.

But the big addition to Baldur's Gate 3 is turn-based combat, and it's here that we see the uncontrollable RNG disaster unfold - a rogue die roll that knocks out the foundations of all strategic planning. It's hilarious and devastating at the same time. This is how to make failure fun.

Swen and his party of two gear up for their first battle after the tutorial (a tutorial under wraps for spoiler reasons) and his first moves are to get to higher ground. "Dungeons & Dragons is a game where you're looking for an advantage and trying to get the enemy at a disadvantage," says Swen. "Getting higher ground translates to a better chance to hit." And so with a flurry of menus and clicks - performed by someone who has played the game while we're only seeing it for the first time - spells, dark vision, sneak attacks, and special weapons all look like they're coming into play. There is a plan, and these low-level enemies are about to feel it in their gaping chest wounds.

"It's over-powered and it tends to kill things in one go," says Swen with nonchalant confidence, as he casts a spell. There is grease, an almighty push attack, a shield spell, the struggle through difficult terrain, bonus actions, a 90 percent chance of hitting, and then… failed rolls.

"It was not as effective as I'd hoped," is Swen's understatement. Both of his party members are dead with one-hit kills. A deadpan line: "I'll restart and try not to die anymore."

It's funny and refreshing for multiple reasons. In a world where every screenshot, b-roll video and demo is fed to the press and influencers, the games business has built a paranoid wall around itself. You must not see mistakes. You must not admit weakness. You cannot not know an answer. Live demos at events like E3 are never live. They run on hidden PC hardware, the banter is tightly scripted and the ten minute gameplay you see is pre recorded. That man is pretending to use the controller. It's unnatural and ridiculous, and yet we all go along with it. It's The Wizard of Oz.

But here is Larian Studios not only showing us a shonky build, but playing really badly, with its own game descending into farcical death. Not because they are bad at their own game, but because the CEO rolled snake eyes. Cheat mode would fix this, but then we won't see the reality unfold. It's as natural as playing a game will ever be. Failure is the most common experience, and yet we try to hide it away. We're embarrassed to show it. But this will happen to you. It happens to all of us. Embrace it. 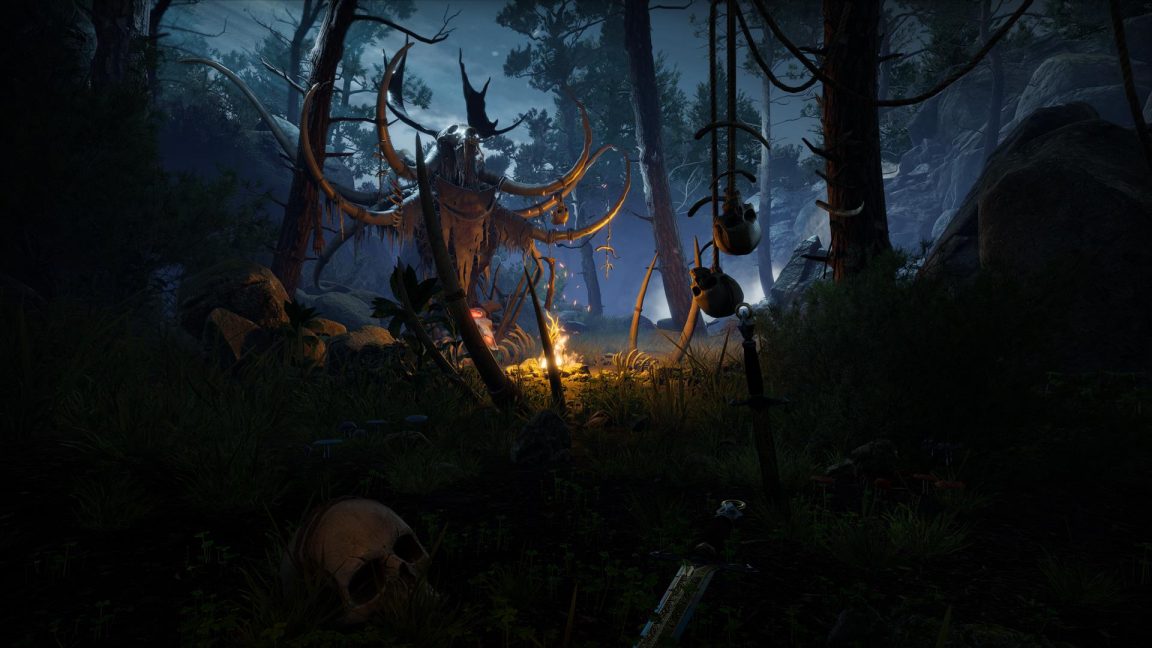 "Edouard [Imbert, combat designer] was sitting behind me, and I just heard, ‘merde,’ under his breath. I was like, ‘It’s fine, Edouard. Don’t worry about it.’ But he did screw a lot of things up, and it wasn’t all the rolls. Some of it was just that he was playing really badly," admits Smith.

Later, once Swen has restarted and cut through the early enemies, the tables are flipped again. In what amounts to an early boss fight of sorts, Swen's party faces off against seemingly overwhelming odds. He uses everything he has at his advantage - spells, invisibility potions, speak-to-the-dead amulets, successful skillchecks, yes - but also earlier conversations that have imbibed knowledge and clarity on the situation. There are spiders, goblins, tieflings and hobgoblins to confront, across a multi-tiered dungeon. It's almost overwhelming and given what we've already witnessed, the emergent permutations are unknowable and probably lethal. "This might go wrong," says Swen. We silently agree.

And yet not only does the party emerge triumphant, but they're taken aback by the efficiency of their victory. By moving party members into strategic positions utilising the turn-based mode that's accessible at any time, the group prepares to tackle enemies with smoke barrels, fire wine, arrows and stealth. Not all of the rolls are successful even when they have a 95 percent chance of succeeding, but when the biggest villain is shoved off a ledge the battle turns dramatically. It's expected to just stun and deliver a small amount of damage, but results in our enemy falling multiple floors to his death. It's over before it really began. "We actually killed him - piece of cake," says Swen. "I can assure you that today's presentation is very different to yesterday's presentation, and will be very different to tomorrow's presentation."

There are cheers. We're all relieved, none more so that the development team quietly cursing their own boss.

So it doesn't all live and die on the roll of a dice. You can nudge fate in your favour. The RNG can be influenced, and sometimes unexpectedly. One moment you're desperately throwing your boots in a vague attempt to cause a shoe full of damage. The next you're standing triumphant over a flaming corpse. These are the stories that we tell. The experiences outside of the story that live with us long after we've completed the game. Baldur's Gate 3 is hopefully going to provide thousands of variations on those, and you'll have different stories to the rest of us.