Set sail on the high seas for adventure, treasures and vomit.

If you have an Xbox One or PC you can now download the Sea of Thieves open beta. Unlike the previous Sea of Thieves betas this one is available to all, and you don't need to have pre-ordered the game or be a member of the Xbox Insider Program. Just hit up the store and download it. This new beta adds the Merchant Alliance and Skeleton Fort hordes.

If you're new to Sea of Thieves with this weekend's open beta it can be a little baffling to begin with. It's not necessarily a hard game, but very little is explained to you at the start when you'll want to get going with the plundering and pillaging straight away. Keep that flintlock in yourbelt for now though, and spend 10 minutes with this advice so you jump straight into the action.

You'll need to complete the first quest - The Stash of Captain Bones - to get a good feel of things.

Sea of Thieves is a co-op multiplayer online game, where crews of pirates sail the seas, digging up treasure, solving riddles, attacking other players for their gold, and striving to become the scourge of the seas. There's no real end game, as the pleasure is in the exploration. While it can be played solo, you'll be at a disadvantage in all combat, whether hand-to-hand, with pistols or ship-to-ship. We're pretty big fans of Sea of Thieves, especially its chilled out approach to open-world romping.

Communicate clearly or get thrown in the brig

If you're playing in a crew you absolutely have to invest in a headset. You can text and use a bunch of set actions (dancing, pointing, showing maps, etc) but if you want to sail the seas successfully and without frustration you're going to need to talk. When sailing a ship it's essential you all take on a specific role to not only navigate to different locations, but when engaged in ship-to-ship combat, steering through brutal storms and hastily repairing your boat.

If you start griefing your crew mates, stay silent when help is needed or generally act like a clown, don't be surprised if your crew votes to throw you in the brig. 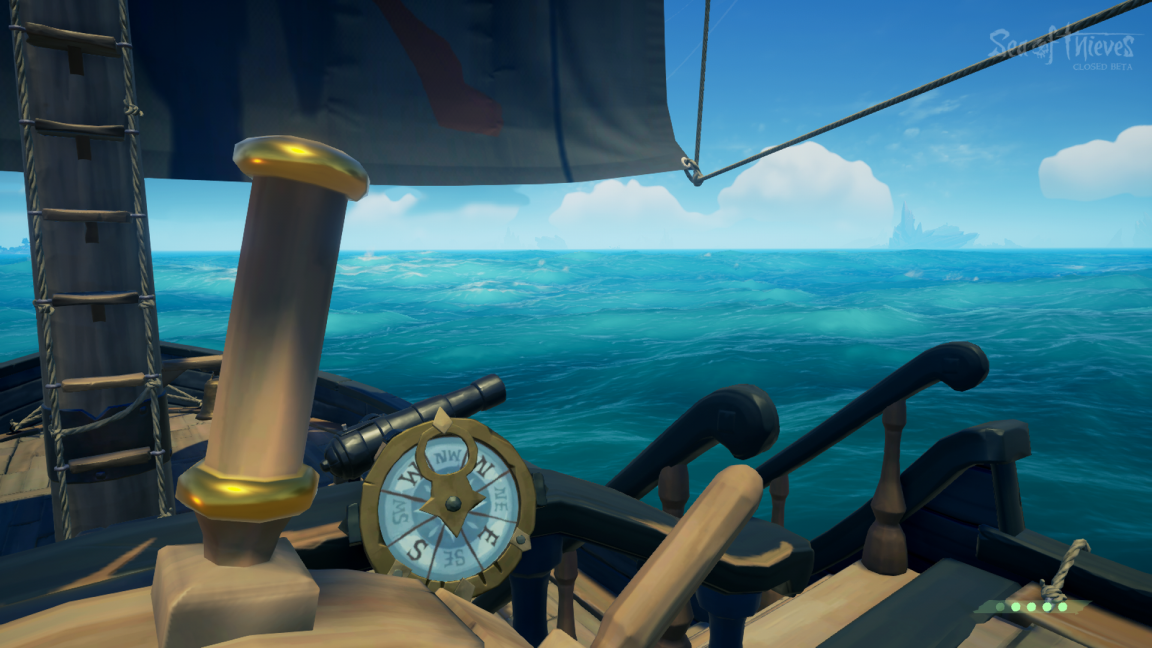 Sailing successfully on the seven seas

There's a lot to do on a ship, which is why you all need to take on roles. Someone should be map reading and giving and checking directions at all times. Someone else should be steering and a third player controlling the sails for speed and adjusting angles to catch the wind. You'll also need to drop and raise the anchor, and it pays to have someone in the crow's nest with a spyglass looking out for enemy ships. If you're playing solo sailing a small sloop it's possible if you flit between wheel, sails and anchor paying particular attention to speed when arriving near an island or other landmark; you don't want to run aground.

When it comes to steering the wheel has one brass peg. When this is in the 12 o'clock position your rudder is straight, so you'll need to remember this for correcting over-steering. One full rotation on the sloop puts the rudder hard left or hard right, but it takes two rotations on the galleon. You can also hear an audio prompt when the rudder is straight.

As well as the compass by the side of the wheel, you can also spot a bright North Star in the night sky which can sometimes be useful for navigation. More useful is another player constantly checking maps and compass directions and communicating them to whoever's behind the wheel.

Where possible avoid storms. If your route looks to be taking you through dark skies then go around - it's worth the extra time. You can see storm clouds and lightening a fair distance away. You really don't want to get caught in a storm, as the rising and plummeting waves will make it very hard to use landmarks as navigation aides and your compass will spin like crazy, making it virtually useless. 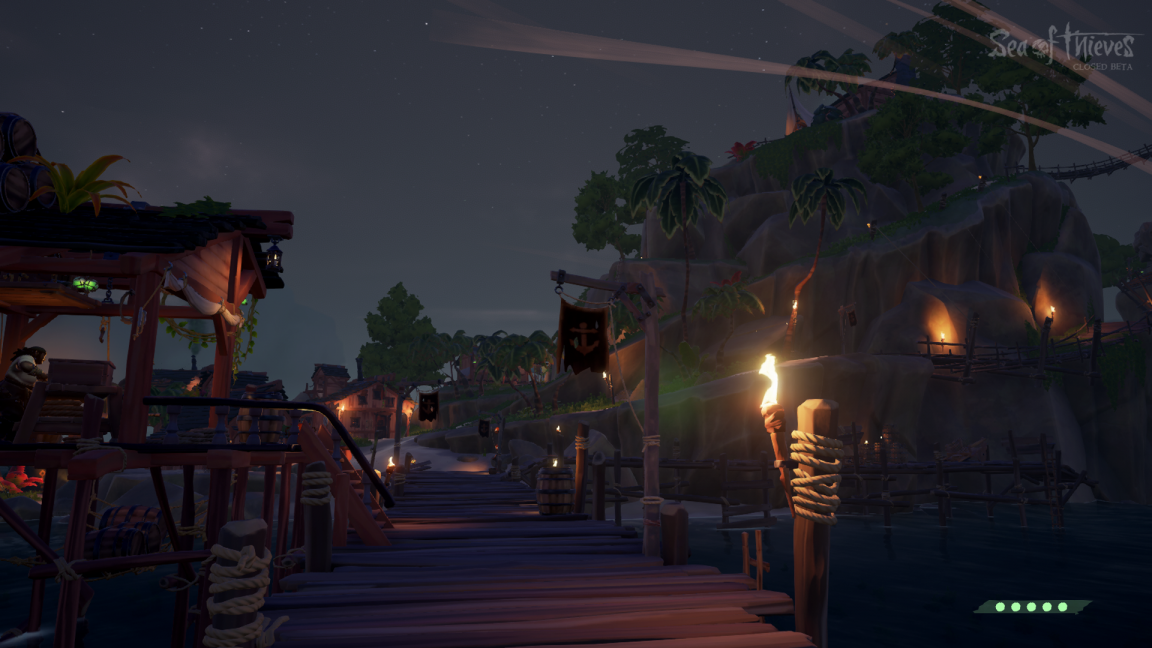 There's a good argument for avoiding any ship-to-ship combat; better to run away and keep your gold. If you're in a sloop this should always be your first choice. A well handled sloop can outrun and outmaneuver a galleon on most occasions. Galleon's are slow, but much better equipped when it comes to conflict.

You should always prime you cannons before leaving any port. Even directly after combat make sure they are reloaded again, saving precious time for when you need them again.

If you find yourself exchanging cannon fire with another ship, it's better to save up two or three cannons and getting close together to unleash them in a volley at the same time. If you're firing one cannon at a time you'll only ever chip away at the enemy, and they can patch their ship up relatively quickly. It's a lot harder to repair three holes in your ship at the same time. This goes for if you're defending yourself too - make sure at least one crew member is on repair duty, hammering planks of wood to fix the holes and scooping up water and bailing it out over the side. Remember getting rid of water is just as important as fixing the leaks.

You should also turn off all the lamps on deck as they can be seen from a good distance at night. Even skeletons manning cannons on dry land will take a shot at you if they see you in the dark.

If one of you is feeling daring you can shoot a player out of a cannon. This is a good way of boarding an enemy vessel but make sure you aim for the sails or risk flying past it. To be honest it's a bit of a reckless approach, but it's a lot of fun when it works. You can also take this approach to landing on an island without getting too close - handy if someone is firing a cannon from the top of a hillside at your ship.

Free ammo and other resources

Every island has barrels of free stuff; bananas for health, cannonballs and planks of wood for repairing your ship. You have no excuse for not being fully stocked up with all of them. You'll also notice an ammo chest in the captain's quarters on your ship, which has unlimited supplies. Stock up at every opportunity.

If you drink too much grog from your ship's barrel you'll start vomiting. If you vomit on other players it will mess up their vision. What you can do is collect your sick in a bucket and save it in your inventory. The next time you have to fight someone hand-to-hand, whip out the bucket of puke and throw it at them to hinder their sight, then pull out your pistol or sword and finish them off. It's a dirty tactic, but you're a pirate and that's how you should be rolling. 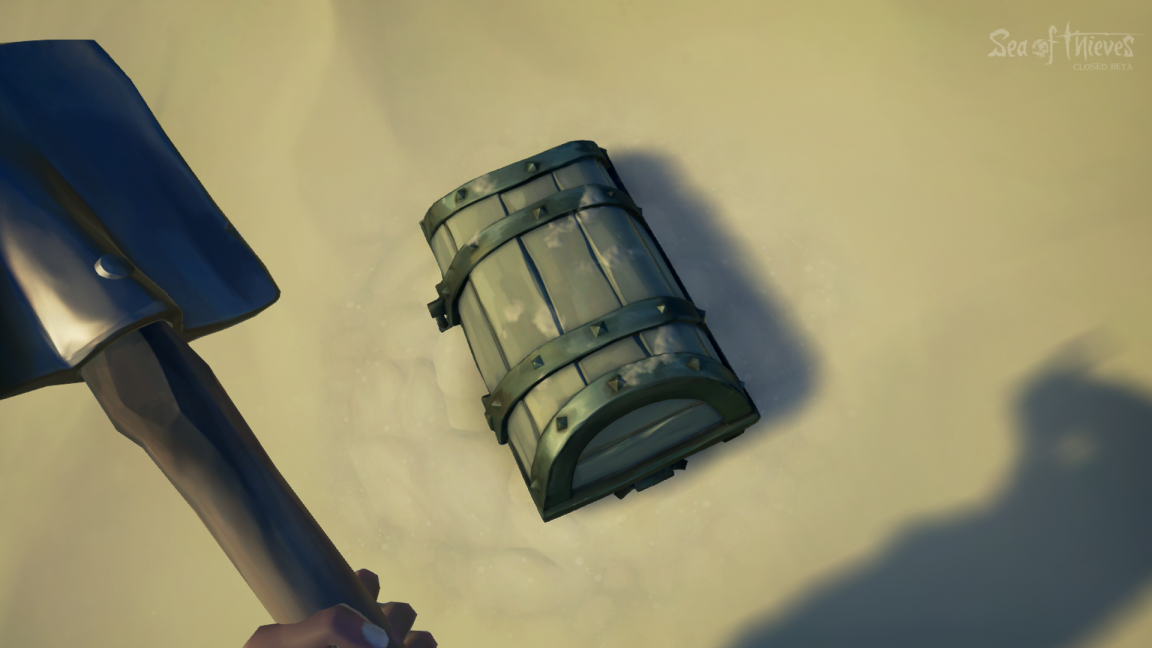 Once you and your crew have found and dug up treasure, you need to keep it safe. Any other players can steal it from you, and indeed, for some that's the whole point of the game. Remember that whoever is carrying the treasure chest is defenseless, so should be guarded at all times, even when you're a few meters away from the Gold Hoarder. Never let your guard down. There aren't many hiding spots on any ship but we do recommend stashing any treasure chests in the crow's nest as it's not the most obvious place, and anyone looking to steal it makes themselves an open target when climbing up to it.

If you're struggling to play the closed beta for Sea of Thieves, there's a guide error codes "too early" and "BronzeBeard" here.